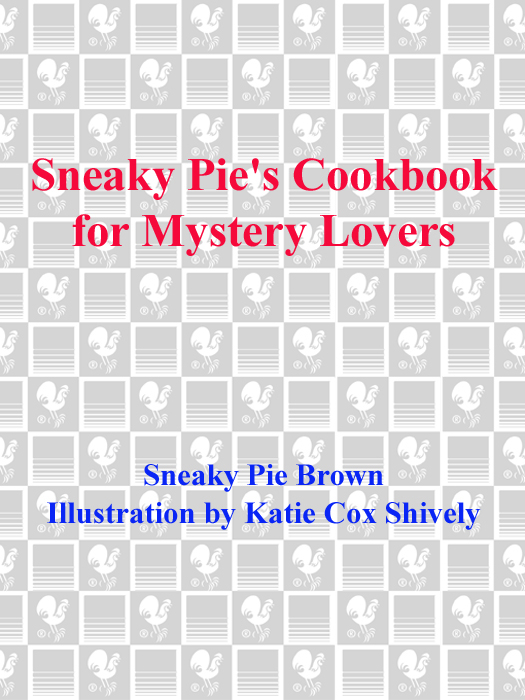 WISH YOU WERE HERE
REST IN PIECES
MURDER AT MONTICELLO
PAY DIRT
MURDER, SHE MEOWED
MURDER ON THE PROWL
CAT ON THE SCENT

THE HAND THAT CRADLES THE ROCK
SONGS TO A HANDSOME WOMAN
THE PLAIN BROWN RAPPER
RUBYFRUIT JUNGLE
IN HER DAY
SIX OF ONE
SOUTHERN DISCOMFORT
SUDDEN DEATH
HIGH HEARTS
STARTING FROM SCRATCH:
A DIFFERENT KIND OF WRITERS’ MANUAL
BINGO
VENUS ENVY
DOLLEY:
A NOVEL OF DOLLEY MADISON IN LOVE AND WAR
RIDING SHOTGUN
RITA WILL:
MEMOIR OF A LITERARY RABBLE-ROUSER

C
AT CUISINE
is very simple: meat, fish, and fowl. We are obligate carnivores, which means we must eat meat to stay healthy. Not that one has to eat as much as my sidekick Pewter, whose butt is so big you could show a movie on it. A kitty should know his or her limits.

I’ve included my favorite recipes plus a few for humans, dogs, and even a couple for horses.

Personally, I enjoy eating with humans but I refuse to eat with dogs. All that gobbling and swallowing chunks of food whole just turns my stomach. Then you spend the rest of the day listening to the symphony played by their intestines. Cats are ever so elegant compared to dogs.

I have personally tested each cat recipe, Tucker has tested the dog recipes and my veterinarian, Christopher Middleton, has checked them out, too. I’ve noted serving sizes only on those recipes for humans. The servings for cats, dogs, and a few others will vary from animal to animal. Tell your human to consider these treats. I’m assuming your regular diet has the protein and carbohydrates you need plus a touch of fat for the winter.

You’ll find no recipes for mouse tartare, mole souffléé, or batwing soup. If I included them and your humans read this, the poor souls would faint dead away. You know how squeamish they are. Imagine telling them how to bite off a mouses’s head? Get the smelling salts!

I hope you enjoy these and I wish you bon appétit and good health.

W
HAT A CHARACTER
Mrs. Miranda Hogendobber is. She’s a devout member of The Church of the Holy Light. She quotes scripture better than TV preachers. She sings in the choir. She fudges about her age but is finally brought up short by her fiftieth high school reunion. She helps out at the Crozet post office, where she is good friends with the much younger Mary Minor Harristeen, the postmistress. Widowed, Mrs. H. hasn’t much money. She often brings in treats she’s baked and Harry, as well as others, encourage her to sell her baked goods.

She finally does go next door to the convenience market and the proprietor says he’ll give it a go. Well, her items are a hit, but none so much as these orange cinnamon buns. The success gives Mrs. H. what she calls “pin money.”

I adore Mrs. H. because in my very first mystery,
Wish You Were Here
, she doesn’t much care for cats and dogs. Mrs. Murphy, with help from Tucker, wins her over—but of course!

½ pint half—and—half (Again, if you’re a fat cat change that to an equal amount of 2% milk.)

A
S YOU KNOW
, I live in the South, which means that each New Year’s Eve the humans are boiling black-eyed peas. The first food of the New Year they put in their mouths has to be black-eyed peas. You won’t catch me eating a black-eyed pea or any other pea for that matter.

Most New Years around here are pretty much the same. Mother intends to stay awake until midnight. She places pots and pans by the door with a giant spoon, the idea being that
after her mouthful of black-eyed peas, she goes outside and bangs the pots. The horses hate it, of course.

Out here in the country, people shoot rifles in the air, set off firecrackers, and make a great deal of noise. In the icy January air, with no leaves on the trees to muffle sound, those sounds carry. There’s a lot of stall banging and loud complaints from the stable on New Year’s Eve.

The New Year’s Eve I remember best occurred when Pewter and I were kittens. The Corgi wasn’t born yet. Mom waited until December 31 to buy a truck. Her first new truck. Pewter and I ran outside to admire the Ford F150 4 × 4. The metallic royal blue exterior seemed deeper against the white snow. The interior was a handsome beige. Naturally, our human was over the moon.

Kiljorn Commander by K. D. Jones
BOOK I by Genevieve Roland
The Aristobrats by Jennifer Solow
Coming of Age in the Milky Way by Timothy Ferris
Accidental Cowgirl by McGinnis, Maggie
My Soul To Keep (Soul Series Book 1) by Kennedy Ryan
Heart Block by Melissa Brayden
Cold Eye of Heaven, The by Hickey, Christine Dwyer
Not Yet by Laura Ward
The Seventh Sister, A Paranormal Romance by Z L Arkadie