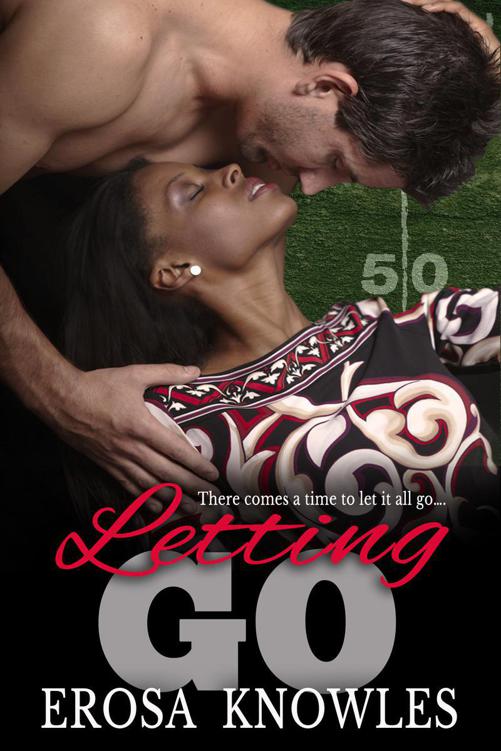 This is a work of fiction. Names, places, characters and incidents are either the product of the author‘s imagination or are used fictitiously, and any resemblance to any actual persons, living or dead, businesses, organizations, events or locales is entirely coincidental. All trademarks, service marks, registered trademarks, and registered service marks are the property of their respective owners and are used herein for identification purposes only. The publisher does not have any control over or assume any responsibility for author or third-party websites or their contents.

All rights reserved under the International and Pan-American Copyright Conventions. No part of this book may be reproduced or transmitted in any form or by any means, electronic or mechanical, including photocopying, recording, or by any information storage and retrieval system, without permission in writing from Erosa Knowles.

ABOUT THE E-BOOK VERSION: Your non-refundable purchase of this e-book allows you to one LEGAL copy for your own personal use. It is ILLEGAL to send your copy to someone who did not pay for it. Distribution of this e-book, in whole or in part, online, offline, in print or in any way or any other method currently known or yet to be invented, is forbidden without the prior written permission of both the publisher and the copyright owner of this book. WARNING: The unauthorized reproduction or distribution of this copyrighted work is illegal. Criminal copyright infringement, including infringement without monetary gain, is investigated by the FBI and is punishable by up to 5 years in Federal prison and a fine of $250,000.

Sexy, handsome men like Grant Whittaker rarely walked through the doors of the middle school where Dr. Kelly Riley worked as an Asst. Principal. In her mind, staring at him was justified. When she learns that he’s a local politician running for office and practicing his oratory skills on her students she’s interested. But when she discovers her son is gay and her lover is running on a conservative ticket, she makes the only decision she feels she can and leaves Grant behind.

Former professional football player Grant Whittaker wasn’t accustomed to women correcting him or dismissing him either. Both things happen within five minutes of meeting the stunning Dr. Riley. After she agrees to go on a date with him, he knows she is the woman he wants to spend the rest of his life with. But she disappears without explanation. The next time he sees her, his emotions churn out of control and he says hurtful things, pushing them further apart.

Grant and Kelly are both thrown mega-sized curve balls and must come to grips with a new way of looking at life if they are to hold their families together. Sometimes accepting what you cannot change is more than a poem, or a few scattered words, it’s a decree. There comes a time when Letting Go is all you can do, to free yourself to love.

Thanks to everyone for your continued support, I appreciate it. Thanks to the local and national PFLAG organization for being a haven of information and comfort for those in need. Thanks to readers all over the world who enjoy a good story that makes them go… hmm. This one is for you.

Karen, Vicky and Kelli, thanks for all of your help and on-point suggestions!

Kelly walked toward the main office, glanced through the glass doors and stopped. It wasn’t every day a man with a swagger like his visited her school. She had no idea who or what his name was, but her gut called him trouble.

He pulled the handle, stepped inside, and stopped. Taller than her five feet seven in her two inch heels, he met her first requirement. Toss in his thick, wavy dark brown hair brushing against his shoulders, full lips, she knew with certainty she’d dream about tonight, and a sexy, irreverent, smile that made her want to reach out and touch. This man breathed life into an otherwise boring day.

“Hello, are you here to meet me?” The deep cadence of his voice grabbed her attention to the point she didn’t respond right away to his greeting. He cleared his throat, shrugged his wide shoulders and stood with his long legs apart. A gesture geared to enable her to hear him better, or so she assumed.

She frowned, the bubble of pleasure burst with his question. “Who are you and why would I meet you at the door of the school?” On closer inspection, he looked even better than he had at a distance, but she suspected he lacked critical intellectual skills upstairs, which sucked.

Nothing killed her interest faster than pretty empty packages. She glanced at her watch; the bell would chime in ten minutes for students to change classes.

“I’m sorry. That didn’t come out the way I meant.” He exhaled. His dark hair caught the afternoon sunlight and brushed against his shoulders with his slight movements. Despite his sunglasses she sensed his hard gaze as he pushed them back up. “I’m supposed to speak to a group of students, well my friend and I. I’m early and not sure where to go. I assumed…but you know what they say about assumptions. Anyway, I apologize.” He jammed his hands into his pant pockets.

Kelly smiled at the way his words rushed together as he fumbled over his apology. Red cheeks softened his face, ramping up her interest. Principal Howard announced in a staff meeting last week some candidate wanted to speak to the kids and someone from the board asked him to approve it.

“I forgot about the eighth grade assembly, but that’s not until last period, over an hour from now.”

The red tinge in his cheeks spread to his neck and he looked over her shoulder down the hall. Suspecting a student loitering in the halls, she turned to see what captured his attention and saw nothing.

“Uh, is there someplace I can wait? I can practice my speech, polish it a bit.”

That surprised her, who wanted to hang around a middle school? “You can use one of the offices or I can take you to the auditorium, it’s empty. But can I ask a question?”

He met her gaze, and she sensed he wished she wouldn’t. “Yeah, go ahead.”

“Why would someone running for a state representative position speak to kids who don’t vote?”

He rubbed his chin. “A couple of reasons. One, they have parents and we’re sending a flier home with the students. Two, this school is the oldest one in the district, with an influential electorate, and in need of other funds to aid in modernization. I can help there. Three, you may not believe this, but I get a little nervous speaking in front of crowds, so my campaign team decided to start here. I have another speaking engagement in two days, a fundraiser, so I need the practice.”

She nodded. “You said a couple of reasons, but you gave three. You might want to watch that when you speak, people like me listen to everything others say.”

He stared at her a moment longer and then nodded. “You’re right. I appreciate that you listen. And I want to be taken seriously so I need to say what I mean. My name’s Grant. Grant Whittaker.” He stepped closer, stretched his hand forward.

“Welcome to Union Hills Middle School. I’m one of the Vice-Principals, Kelly Riley.” She released his hand and stepped back, but not before inhaling a whiff of his cologne. The subtle scent smelled earthy and masculine, revealing more about the man.

“Thank you. You’re the second in command around here, huh?” He lowered his voice and stepped closer.

“Yes, there are two vice-principals, why?” He seemed a lot more confident now.

“Just wondered. How long did you go to college?”

The smile dropped from his face. “For real? It takes that long to be a doctor.”

“That’s how long it took me to get my PhD.” Bristling at the doctor comment, she made her statement with pride and no apology.

He jerked back. “A doctorate? To be a vice-principal? I didn’t know it took all of that.” He scratched his head, a confused, uncertain look settled on his features.

“It doesn’t. I got the position with my masters. Once again be careful. You asked me how long I went to college, not what degree it took to get this position.” She shook her head, disappointed by his shallowness. “Let me show you someplace you can rehearse,” she said in a dismissive tone. The man thought he could treat her like a brainless chick and then couldn’t handle the fact she had more education than him. She had no patience for ignorance.

She took two steps before he touched her elbow.

“I’m sorry. I keep putting my foot in my mouth.” She looked at his hand until he removed it.

“The bell to change classes will ring in a minute. I need to watch the halls. You can wait in the office and I’ll open the auditorium for you after the halls are clear.” She pointed to the wooden double doors with an Administration sign on top and walked off, disappointed. No doubt he skated by on his looks, because he lacked in the social skills arena. The man couldn’t carry on a decent conversation. She required a hell of a lot more brain power from a man to hold her attention.

He didn’t say anything at first. Then, “I’d like to stand in the halls with you.”

She glanced back at him. “What? Why?”

The bells chimed and the sound of doors opening barely forewarned them as a mass of chatter and footsteps filled the air. The sound reminded her of a cattle stampede. She stood sentinel in the swirling mass of young bodies, assuring obedience to school policy and a smooth transition from one class to the next.

She looked down at the student trying to place the name. “Ginger?”