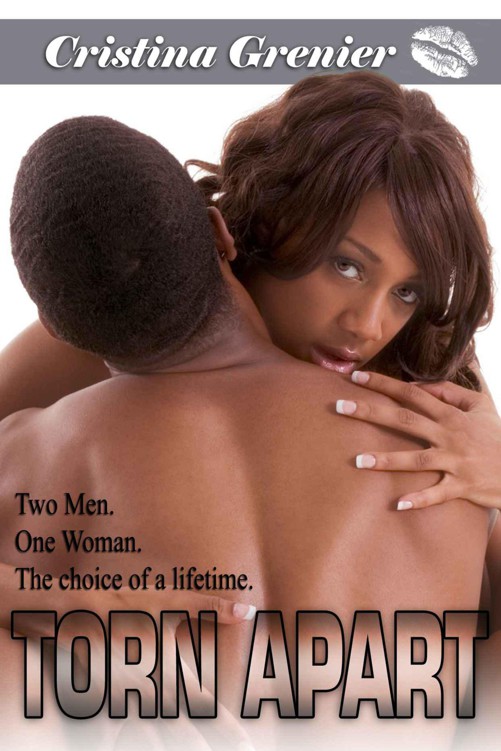 License Notes
This ebook is licensed for your personal enjoyment only. This ebook may not be re-sold or given away to other people. If you would like to share this book with another person, please purchase an additional copy for each recipient. If you’re reading this book and did not purchase it, or it was not purchased for your use only, then please return to Smashwords.com and purchase your own copy. Thank you for respecting the hard work of this author.

Other sizzling books by Cristina
Grenier

Rhonda sta
red at the white ceiling of the room, which had become like her second home in the past couple of months. She was trying to hold her composure but Ken was making that impossible for her to do. As she lay on her back, Ken ran ice cubes on her sensitive-to-the-touch skin on what was being called the hottest day of the year so far in Traverse City. He had started using the ice cubes on her forehead only moments ago, but now he was down to her navel continuing to head south.

“Do
you want me to stop?” Ken whispered softly to her.

Although Rhonda’s
mind was telling her yes, her body was yelling “hell no!” The sensation of the ice combined with Ken’s kisses circling her dark chocolate areolas caused her to only respond with light breathing and words caught in her throat.

“Are you trying to say something?” he whispered over her skin in between sucks and light nibbles on her equally dar
k chocolate protruding nipples.

Rhonda managed to heavily breath out
“no” as she closed her eyes to get her mind off of the things that were telling her why she needed to stop, and instead focus on the moment. This will be the last time, she thought to herself. By this point, Ken had spread Rhonda’s legs and what was once an ice cube had melted over his fingers and now mixed in with the sweetness of her pussy that he was alternating between tasting with his tongue and penetrating with his thick caramel digits. Rhonda could not contain herself as she moaned and was about to experience yet another orgasm this afternoon, thanks to Ken.

“What am I doing?
Why can’t David make me feel like this?” she continued to question herself trying to place her guilt elsewhere. As if he was reading her mind, Ken spoke aloud as he unknowingly answered her question: “If your fiancé, the good reverend, spent more time tending to you then you wouldn’t have to be here with me.”

Rhonda Love Downing had met David over a decade ago in high school. Rhonda had always known of the popular upperclassman but they never uttered a word to one another until the last semester of his senior year when David walked up to her in the library after school and decided to officially introduce himself. David Barnes appeared to have known who she was, probably as a result of her friendship with his cousin Sherry who was also a junior like Rhonda. They ended up taking their conversation outside of the library and David walked Rhonda home where they continued talking outside for another couple of hours. He expressed how he was going to be attending college about 45 minutes away, making it a point to let Rhonda know how conveniently close he would be, and most likely would be coming back home often to visit most weekends.

After that walk home Rhonda
rushed in her house greeting her parents before rushing off to her room before dinner. The Downings had instilled in their only daughter the responsibility of taking care of homework first and then having free time to talk on the phone, watch television or whatever teenagers did for fun these days. Rhonda usually stuck to that rule to the point where her parents never had to check up on her to see if she was taking care of business—her grades showed that. Tonight, though, Rhonda had to call Sherry immediately. She needed answers from her best friend about David so she could find out his intentions.

“I was wondering what was with all the questions! He came by the house yesterday like he was just visiting but then he started in about you. I just didn’t think he was going to approach you without me being the middle woman,” Sherry said excitedly.

“And you didn’t even call and tell me afterward or even mention it at school?”

“I was going to call you last night but mama started putting me to work after I got done with my homework and I didn’t think
about it today. I’m sorry girl but what do you think about him? What did he say to you?”

Rhonda
described the afternoon in detail from David coming up to her in the library all the way up to him walking her home. It was obvious to Sherry that her best friend really liked her cousin and she thought that David and Rhonda would make a cute couple. Sherry shared with Rhonda that David had broken up with his last girlfriend and was in fact single, something that took Rhonda by surprise.  Rhonda remembered he was always dating or seeing someone, so for him to now be pursuing her was bewildering because she did not consider herself to be David’s type. She had been hesitant in exchanging phone numbers with him because David did have a reputation as being a player and it caught her by surprise that he was interested in her. Rhonda mainly kept to herself and she only had a handful of people she truly called friends.

Rhonda was smart and
very active in various clubs in the school so she, too, was also popular amongst a certain crowd; her intelligence and the way she carried herself is what attracted David to her. He had also known of her but it was not until Christmas Break when Rhonda showed up to visit Sherry at his aunt’s house that he had the chance to see Rhonda more up close and personal. David had never noticed how curvy and voluptuous she was; she carried it well on her 5’8” frame too. She was polite but she made no effort to throw herself at David or even attempt much conversation with him; Rhonda was a mystery to him and more of a challenge than many of the girls he encountered at school. What David saw as being mysterious was what Rhonda called being shy. Back then, as a teenager, it took her a little time to warm up to people immediately so she was often labeled as shy. When David approached her in the library, it was as if Rhonda found the courage to open up and communicate with him as if they had been old friends. The conversation that David brought was also different than the type of comments she was used to receiving from guys in high school; he seemed more mature even compared to his fellow seniors. Although Rhonda was not into high-yellow or very light-skinned guys, the pretty-boy types as she described them, she did find David to be attractive and charming. As he escorted her home Rhonda noticed that he seemed to be the perfect height for her, somewhere over six feet, where she could wear heels and he would still have a little height over her. She could not help but be curious about David sexually and how the experience would be with him because she assumed he had lots of knowledge and experience in that department. She, on the other hand, was a virgin and the thought had crossed Rhonda’s mind that this may have been his motivation for approaching her. Lord knows she had classmates that assumed that fact and were often coming on to her promising to be gentle enough with her yet able to do some things to her sexually that would make her get her head out the books more often. That was just one of the many so-called come on lines she received from her fellow male classmates. Rhonda never confirmed one way or another what her sexual status was, with the exception of sharing it with Sherry. Rhonda trusted Sherry enough to know that she would not divulge that information to David though. Although David was Sherry’s cousin, she looked out for Rhonda as if she was a sister; they had been that close since Sherry had transferred to the high school over a year or so ago.

After a couple months
with David, Rhonda was no longer an innocent virgin girl but an experienced young woman. Through the month of January, word had gotten around the school about David and Rhonda although at that time they were still just getting to know each other. David had just broken up with Tina, who had just started to hear the rumors about him being seen in and out of the school with Rhonda. Tina had noticed that David had seemed to pull away but as seniors they were all busy with finishing up last semester requirements, preparing for college, and having a good time; unfortunately the good times with David had become less frequent. Although Tina felt as if they were no longer a couple after a year of dating, she and David never had a discussion confirming that their relationship was finished. Finally, Tina saw David hanging around the younger girl’s locker after school one day and could immediately tell that he was smitten with Rhonda. The way he was hanging on Rhonda’s every word and their body language reminded Tina so much of when David had begun pursuing her over a year ago. Instead of making a scene, Tina approached Dana, her fellow teammate on the cheerleading squad, who was also a junior in many of the same classes as Rhonda. She knew Dana was nosy and usually had the information on everyone and everything going on in the school; Tina needed to confirm what she had already suspected—that David had lost interest in her and moved on.

Dana Peters
had been one of Rhonda’s good friends since sophomore year, so when Tina came questioning her about David and Rhonda she knew she needed to alert Rhonda. Dana and Rhonda were complete opposites when it came to interests, but that was what seemed to make their friendship work for both of them; Dana did not have many close friends as smart and mature as Rhonda; Rhonda did not seem to care about what her peers thought of her so Rhonda did what she wanted even if it was not considered the “in” thing to do. Rhonda did not have many close friends period but Dana was one friend of hers who got along with all the cliques within the school—Dana was very active with all things possible within the school. It was Dana who usually was Rhonda’s source of information on the happenings of the school and of the students, good or bad. She found Rhonda at the library after school that day and as soon as she saw Rhonda’s face after revealing the conversation she had with Tina, she quickly regretted having opened her mouth; Rhonda looked as if she wanted to cry.