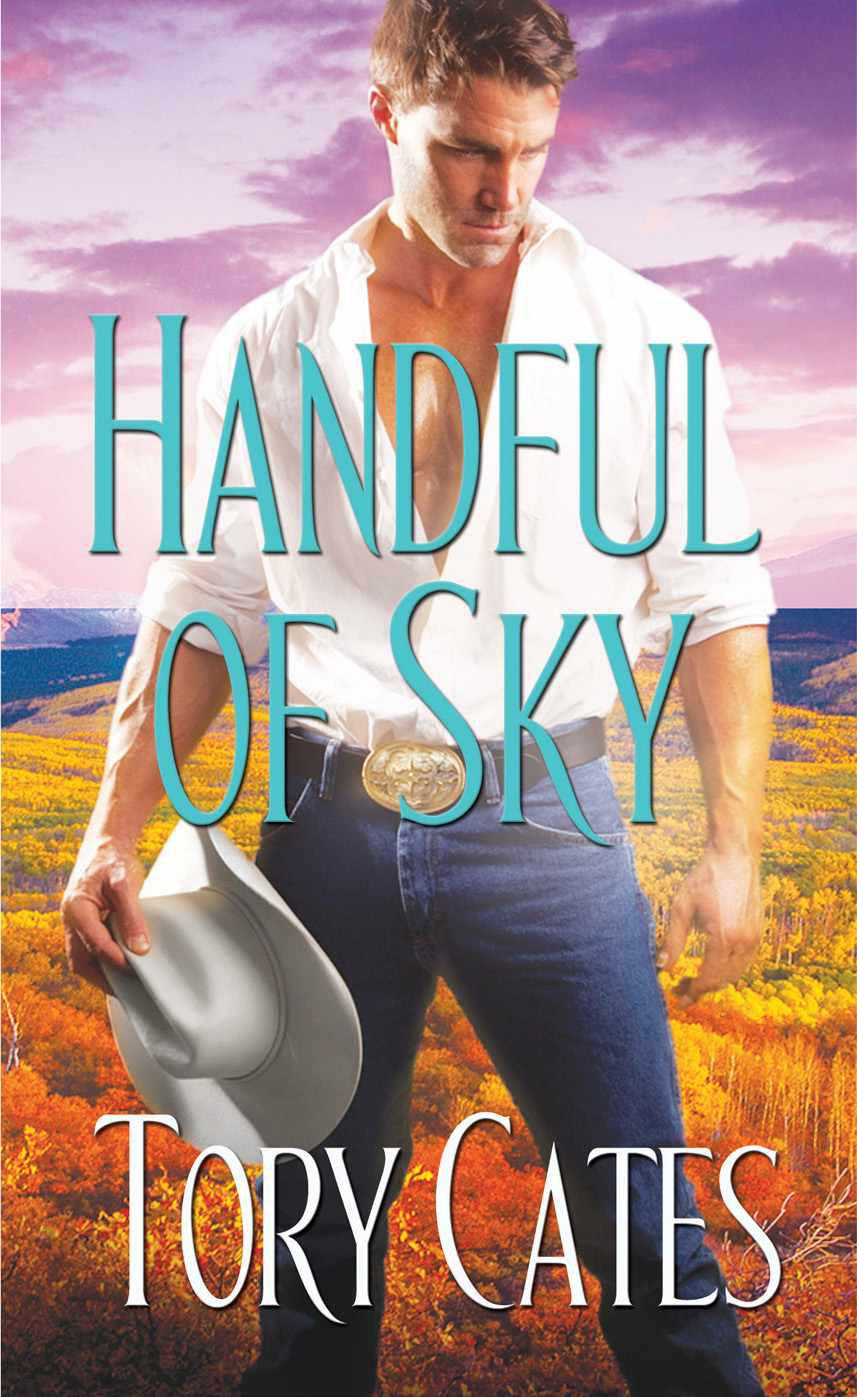 Thank you for downloading this Pocket Books eBook.

L
lano Estacado. The Staked Plains.
Shallie Larkin mentally assessed the name the early Spanish explorers had given to the region whizzing past her high window. She’d heard this part of New Mexico which she called home referred to as “desolate,” mostly by tourists from the East accustomed to tree-shrouded landscapes. Shallie couldn’t imagine living anyplace where trees and buildings and mobs of people blocked out the sky.

Shallie rubbed a mittened hand over the frosty patch of glass where her warm breath had condensed. From her lofty perch in the big truck her vision swept out across the wind-raked mesa, dusted in spots with patches of late spring snow, stopping only at a strip of cobalt-blue mountains rising in the hazy distance. Her spirit soared, unleashed by the majesty of the land.

She couldn’t understand how anyone could perceive such a vista as being desolate. For her it was a land of
possibilities where limits were set only by the boundaries of a person’s imagination. Maybe it was this unfettered view, she theorized, that had caused her to set her sights so high.

A wisp of cirrus floating all alone in the vast sky caught Shallie’s eye. Nervous tension abruptly knotted her stomach as she felt herself riding all alone as well and, very possibly, too high.

Let my spirit be big enough,
she wished fervently, almost as if offering a silent prayer to the grandeur of the land she loved.

The strident shriek of gears grinding together brought her awareness back suddenly to the diesel-smelling confines of the huge truck’s cab. She glanced at the driver, her hired hand, Wade Hoskins. Although she was his employer, Shallie had difficulties making herself speak to the man, much less give him orders. She’d overheard enough of his conversations to know that he was a man to whom women were either “skanks” or “heifers.” Just sitting next to him made her feel unclean.

“Thought that’d get your attention.” Wade Hoskins parted his lips in a wolfish imitation of a smile, revealing the black space where an incisor had once been. His lower lip bulged with a wad of chewing tobacco.

Shallie’s tight smile was the only reaction she let herself show. She fought the revulsion that rose in response to the leering, sidelong glance he shot her way. She
wanted to scoot her slender, jeans-clad body even closer to the window she already hugged. But she couldn’t allow Hoskins to see that he intimidated her. Today she was taking her first, unassisted step into a world where she would have to hold her own against men like Hoskins. It was crucial that she win, if not their respect, at least their cooperation, or all her dreams would be lost.

Hoskins openly stared at Shallie’s determined profile. He was pleased to note the rigid set of her spine. His scrutiny made her so stiff that each bump in the road set her palomino-gold curls bouncing.

“I ain’t never had a boss woman before,” he drawled, overplaying his Texas accent. “Leastwise none that could prove to
me
that they was a real woman.” He watched for her reaction and was delighted to see a sudden burst of color suffuse her apricot-toned cheek.

Shallie continued staring grimly ahead. She could just imagine how a man like Wade Hoskins, his gut spilling so far over his belt that the buckle was lost, would define a “real woman” and what he would demand in the way of proof. Her pansy-brown eyes grew cold as iced coffee as she contemplated the stomach-turning image. It infuriated her that Hoskins felt free to make comments like those. He certainly would never have dared to in front of her uncle. For one chilling moment she was afraid she wasn’t ready to take her uncle’s place. Being a rodeo contractor, responsible for supplying the animals and
ensuring a smooth-running show, was a difficult enough job for a burly former rodeo cowboy like her Uncle Walter. What had ever made her hope that a five-foot-four, 120-pound woman could handle it?

Suddenly she wished she’d cultivated more orthodox ambitions. Why couldn’t she have been content doing something with the business degree her mother had insisted she earn? Something other than keeping the Double L’s books and negotiating the contracts that came in. Shallie didn’t have to ponder that question long. The answer came as a memory of those long years spent inside four walls and the suffocating, claustrophobic feeling that had accompanied her years of study. She’d always done well in school, but not through any native love of studying. She considered it a trade-off she’d had to make. Seven hours of imprisonment in a classroom in exchange for a few hours of freedom outside at the end of the day.

Beyond that was the irrefutable fact that she loved rodeo and wanted to carve out a life for herself in it. She’d wanted that for fourteen years, ever since she was ten and her father, over her mother’s strenuous objections, had started taking her to rodeos to watch him and his brother, Walter, win all the prizes in the team roping competition.

At first she loved rodeo just for the escape it offered from a world ruled by a mother who spanked “bad little girls” who committed unpardonable offenses like
scuffing their patent-leather party shoes or missing a word on their spelling tests. On the rodeo circuit there were no party shoes and no spankings. Freed from their white-picket-fence prison, she saw her father, taciturn and unsmiling at home, blossom into a happy man with a joke and a kind word for everyone. But, even after the accident that claimed her father’s life, Shallie remained smitten by the highly infectious malady that those afflicted can only describe as “rodeo fever.”

It was in her blood. Two years ago, on the day she’d finished her last college class, she’d gone to work full-time at the Double L Rodeo Contracting Company, which her uncle anwd father had started ten years earlier. Five short years before her father was killed.

Her mother, who had come from a wealthy Denver banking family, had packed Shallie off to an exclusive women’s college in that city shortly after the accident. Her mother had hoped to end forever her daughter’s unseemly fascination with the sport she held responsible for ruining her life, although she herself had experienced that same fascination when rodeo had taken the breathtakingly handsome form of John Larkin—Shallie’s father—the man who was to become her husband. She had married him assuming that rodeo was merely a whim for the soft-spoken man whose kisses made her forget her exalted position in society, and that he would, of course, eventually be absorbed into her family’s banking
establishment. She thought that her husband would be given a job with high pay and few responsibilities just as her sisters’ husbands had.

But John Larkin had harbored other plans for his wife and the child she was carrying when they were married. He’d never wanted nor accepted a cent of her family’s money. Over her loud protests, John Larkin, just as he’d promised he would before they married, moved his new wife to a small ranching community outside of Albuquerque where he and his brother ran a few head of cattle and practiced doing what they did best—roping steers as a team. When they weren’t practicing they were doing what cowboys do when they answer rodeo’s siren song—they were “going down the road” chasing after jackpots and prize money. They won consistently and put aside every penny they could save in hopes of one day starting their own rodeo company.

Their dreams had materialized in the Double L, each “L” standing for one of the two Larkin brothers. Shallie remembered her mother, who had long since moved her and her daughter into a “respectable” house in Albuquerque, pouting and refusing like a spoiled child to ever set foot on Double L property. Shallie had visited the ranch, though, and soon her father’s dream had become her own. The burden of proving that she was worthy of it weighed heavily on her. It had been thrust upon her quite unexpectedly.

That morning her uncle had been up and dressed when Shallie had come down to start off on the long drive to the rodeo in the Panhandle of Texas that they’d contracted to produce. He was issuing orders to their two hired hands, Wade Hoskins and Pecos Cahill, about which livestock was to be hauled hundreds of miles to the rodeo. But, even with his cane, he could barely hobble about. The hobble was the legacy left by the car wreck that had ended her father’s life and her uncle’s roping career. The long cold New Mexico winter had taken its toll that year on his shattered knees. He’d grimaced with pain as he tried to bend them enough to haul himself up into the eighteen-wheeler’s cab.

“Shallie, girl”—her uncle had shaken his head in weary resignation as he’d backed away from the truck—“it doesn’t look like this worn-out old body is going to carry me to the rodeo.”

Shallie too had backed away. The pain and worry that clouded his eyes, however, halted her timid retreat. The Double L had never failed to honor a contract. She knew that a blemish on that record would hurt her uncle far more than the ache in his injured knees.

“Don’t worry. I can handle everything.” Shallie’s words had tumbled out before she could allow herself to think about the enormity of the task she’d just committed herself to, before she had time to see a smirk spread across Wade Hoskins’s face.

Walter stared at her as if somehow trying to reconcile the image of a potbellied, cigar-smoking rodeo contractor with the slim, fine-boned girl standing before him. It wasn’t her words, though, that finally allowed him to put the two together. No, they quavered and had a hollow ring to them. It was the look in his niece’s eyes. For Walter Larkin it was as if he were staring into his brother’s eyes thirty years ago when John had announced, “Walter, you’re almost thirty-three and I’m crowding thirty. We both know that the day will come, and it will come soon, when we’ll have to hang up our ropes. Now, neither one of us is ever going to be completely happy unless rodeo is part of our lives. So, what we’re going to do is start a rodeo company.”

Walter had laughed. Between the two of them they didn’t have the price of a hot dog for dinner. But they hitched rides to Denver, borrowed horses, and roped themselves into the first-place money. The only thing that stood in his way—from the moment John had made his announcement until they owned the Double L—had been love. A strange kind of love. Walter had never been able to understand how John could have taken the wife he did or why they ever stayed together. It was one of the few puzzles in Walter Larkin’s straightforward life and one of the reasons he’d remained a bachelor.