Harriet Bright in a Pickle (4 page) 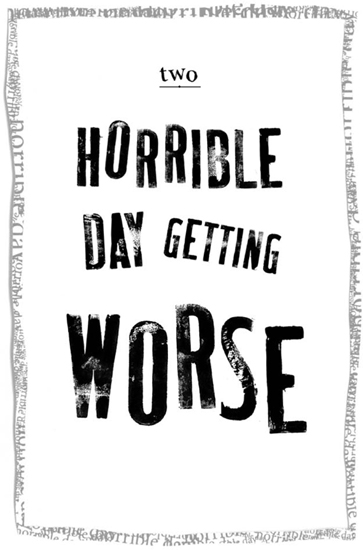 âI feel sick,' said Harriet Bright as the school bus weaved slowly around a corner and hauled itself up a hill.

She had just eaten a steak-and-kidney pie and a tub of triple-chocolate ice cream.

âI need some air!' she spluttered.

She stood up to the window and stuck her nose into the fresh air.

âHARRIET BRIGHT! SIT
DOWN
THIS
INSTANT!'
barked Mr Moody, the sports teacher, from the back of the bus. âWe do
NOT
stand up in a moving vehicle!'

Harriet Bright glared at Paul Picklebottom, and he smirked back. Then he flapped his arms around and started gasping as if he couldn't breathe.

Harriet Bright took one last gulp of air and flopped back down into her seat. âThis is going to be the
most
horrible day. I just know it!' she said.

It had already started off badly.

The first thing Harriet Bright saw when she woke up was her calendar on the wall.

Today's date had big black letters all over it: 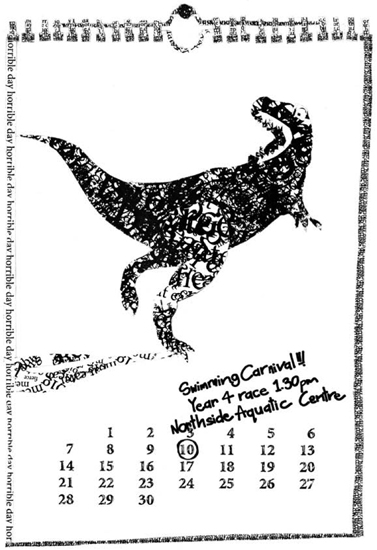 She hated it every year!

Harriet Bright crossed her fingers and toes, and pulled back the curtains.

Maybe it was raining and pouring!

Maybe the carnival would be cancelled!

No. The sky was very blue with
wispy-white
clouds.

Harriet Bright closed her eyes and wished as hard as she could that it was tomorrow.

When she opened her eyes, her mother was packing her swimming togs and towel.

It was time for the backup plans.

âI've woken up with a rare disease and can't go out in the sun,' said Harriet Bright.

Her mother packed a large sunhat and put extra sunscreen on her face.

âI've got gro
wi
ng pains in my feet and can't walk,' she said to her father on the way to the car.

Her father loosened the laces in her trainers to give her feet more room.

âExercise makes my face go red,' she said to Mr Moody, who was counting heads as he bustled the children out of the classroom.

âIt's the
Glow
of
Life
,' he growled as he herded her inside the bus.

âI want to be a poet,' sighed Harriet Bright as the bus pulled out of the school on its way to the aquatic centre.

Poets shouldn't have to go in swimming races, she thought.

What if I get

What if I get water on the

It was just
too
terrible to think about.

Mr Moody was prowling around the bus.

âFeet
OFF
the back of the seat, Melly Fanshawe,' he snapped. âYou'll leave a nasty stain on it for the next person. And goodness knows where
your
shoes have been!'

He looked suspiciously at her shoes.

Everyone knew that Melly Fanshawe had stood in cow poo last week when the class visited McSweeney's farm.

Harriet Bright groaned. How could she play I Spy at a time like this?

Paul Picklebottom was telling whale jokes at the back of the bus.

He said that Harriet Bright was just like a whale when she was in the water.

Harriet Bright was the worst swimmer in the school.

Paul Picklebottom was the best.

Mr Moody said he must have webbed feet.

Harriet Bright had seen Paul Picklebottom's feet when they went to visit the aquarium and had to take their shoes off to go inside the tropical fish enclosure.

Harriet Bright looked closely to see if he had any extra toes.

She could only see five on each foot, but he
did
have scaly heels.

âI spy with my little eye, something beginning with
T
,' said Melly Fanshawe.

Melly Fanshawe frowned. âIt has to be something you can see,' she said.

âYes,' said Harriet Bright. âIt's crawling up the side of your seat.'

âIt can't be a tarantula,' said Melly Fanshawe. She looked behind her. âIt's a big, black, hairy â¦

Mr Moody came running and the bus driver slammed on his brakes.

âA tarantula
is
a spider,' said Harriet Bright as Mr Moody caught the spider and threw it out the window.

Melly Fanshawe glared at her. She didn't like spiders.

Harriet Bright pointed at Mr Moody. âIt's
HIM!'
she whispered. âHe's
big
and
fierce
, and I
know
he eats meat. He won the hot-dog eating competition at the school fete last year.'

Melly Fanshawe sighed. âWell, you're sort of right,' she said. âIt was TEACHER.'

how I wish you'd

Way above the world

how I wish you'd

Harriet Bright looked out of the window.

There was a signpost at the corner:

When I'm grown up and famous, she thought, I'll eat chocolate for breakfast and I won't have to go in swimming races.

Harriet Bright was reading a book called
The Lives and Times of Famous People
. She had written a whole stack of poems in case she ever met any of them.

She didn't want to be lost for words. 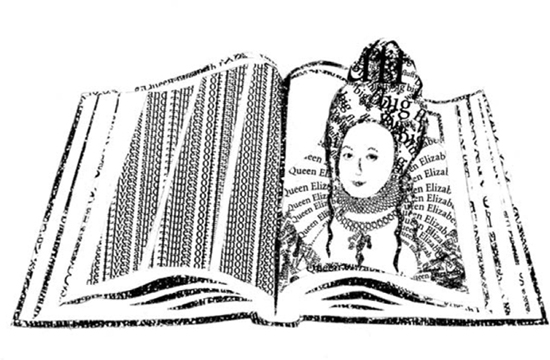 Poem for meeting Queen Elizabeth I

(Harriet Bright knew that Queen Elizabeth I had died more than four hundred years ago, but sometimes people just fell through holes and became time travellers. People in books did that all the time!)

Your Majesty, I love your wig.

It sits high on your head, all fluffy

My hair is straight and cut in a bob.

Mum says I can grow it when I get

Mr Moody often talked about famous people in sport. Last week he had told them about famous Olympic swimmers â people who had broken world records. He said they were !Inspirational! because they trained very hard to be as good as they could.

Then he wrote an equation on the blackboard:

Then Mr Moody made them run around the school oval
three times!

âAnd we come from a long line of non swimmers,' she said, âthanks to Great Uncle Cedric. He had a
Nasty Moment
with a wave when he was forty-four. And fear of another
Nasty Moment
has been passed down from one generation to the next.'

âDoes that mean you'll write me a note?' Harriet Bright had asked hopefully. âYou could tell Mr Moody about our Nasty Moments and say that I
absolutely can't possibly
go into the water!'

Her mother had smiled. âIt's good to try different things, Harriet,' she had said. âYou might just discover you have a talent you didn't know about.'

The bus rounded another corner. Harriet Bright could see the aquatic centre ahead.

It was big and shiny, with a brand-new outdoor pool.

The bus pulled into the car park, and everyone began to scramble for their bags.

âOK,' shouted Mr Moody above the noise, âout of the bus and into the change-rooms. The races start in twenty-five minutes, and I don't want anyone to be late. Did you hear that, Harriet Bright?' he added sternly.

Horrible Day Getting Worse
, she thought to herself.

The Borgias by G.J. Meyer
Legacy of the Dead by Charles Todd
TherianPrey by Cyndi Friberg
in2 by Unknown
Qumrán 1 by Eliette Abécassis
With Everything I Am by Ashley, Kristen
100 Mistakes That Changed History by Bill Fawcett
The Legacy by D. W. Buffa
The Intuitionist by Whitehead, Colson
Voices of Silence by Vivien Noakes