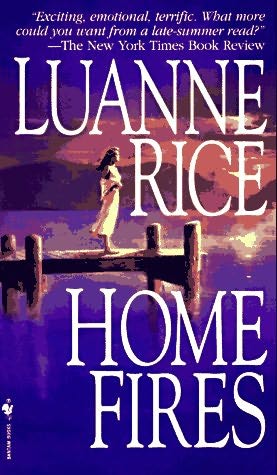 Praise for the Transcendent Novels of Luanne Rice

A Preview of
Summer's Child

And Look for
Summer of Roses

F
OR THE
Q
UIGLEYS

Don, Muffin, Colleen, Tom
and especially Derek
with love and thanks

T
he fire started in the tangled old wires behind the bathroom heater. At first there was no flame, only a core of intense heat. The wires' frayed insulation, gray weave with the texture of a man's jacket, began to smolder. One spark popped, then another. The orange line crackled to the panel board, causing a momentary blink of the house's microwave, stereo, television, and alarm clocks.

In that instant the portable phone beside Anne Davis's bed clicked, resetting itself. Usually the sound would awaken her, but tonight it barely penetrated her deep sleep. She had been traveling all day; it had been months since she had slept well. She half turned toward the bedside table, but she was engulfed in a sweet dream that would not release her.

Tendrils of blue smoke wisped through the wallboards three rooms away. They dissipated like ghosts into the thin winter air. Flames licked the wall from behind, trying to follow the smoke. They raced in all directions, searching for cracks. One line of fire spawned another, and another, all crazy to escape. They filled the space like agitated spectators in an arena crammed beyond its capacity. They sped down the wires, and that was all it took. When the electrical system exploded, the flames burst through the wall in one thunderous blast. The house was on fire.

I
T
was another Karen dream that enveloped Anne as she slept. A dream of hazy images, clear bliss. Karen in her arms. At the beach, with Matt nearby. The sun's heat sensual and intense. Anne's nose pressed against Karen's skin, the spot where her neck and shoulder met, smelling of summer. Baby sweat, Coppertone SPF 40, salt water, chocolate from a Good Humor bar. Karen's weight on Anne's lap, and the sound of waves lapping the shore.

A clack. Sounds from the outside world.

Anne shifted, her face burrowing into the pillow, anything to preserve the dream. The family on summer vacation. Matt, Karen, and Anne together on a beach blanket. The hot summer day: she had it back, that feeling of joy and closeness. It was perfect, and so very real. She could touch Matt's leg, lick salt grains from the nape of Karen's neck. All her senses were awake; contentment throbbed through her body like lifeblood.

Then the house exploded.

Anne jumped out of bed. For a second she didn't know where she was. She started for Karen's bedroom, just yards away, then realized she wasn't in their New York apartment. She had come to the island, to her family home, the place where she'd grown up.

Smoke drifted in from the hall, under the closed bedroom door. Shivering in the dark, Anne touched the door with her hand. It felt scorching hot. Grabbing a bureau scarf, she wrapped it around the brass knob and pushed. Fire roared inward, burning her hand as she slammed the door.

She ran to the window and saw the snow glistening orange a long drop below. Her room was on the second floor, and the land sloped steeply away. In the distance, coming from town, she heard a siren. She returned to the door and touched the knob, as if to check that it hadn't somehow, incredibly, cooled down. Then, with no other choice, she turned back to the window.

“Karen,” she said, choking with smoke and panic. There was no time to tie bedsheets together, no time to wait for the Island Volunteer Fire Department. She opened the window and looked down. Height, even this twenty-foot height, terrified her. She gulped air, but the smoke was catching up with her. She could jump out the window, she thought, then reenter the house by the porch door.

Climbing over the sill in her white nightgown, she let herself hang against the side of the house. It took forever to summon the power it took to let go. Don't think about it, she told herself. You have to do this. Jump. Jump. Finally her fingers obeyed. With bare feet she kicked off. Her eyes were closed. She tried to forget she was falling. A snow-capped yew bush broke her landing, and she rolled a few yards down the hill before she could stop herself.

Flames had broken through the bathroom roof, and the west upstairs windows glowed. Sirens screamed down Salt Whistle Road. Before Anne reached the porch, she heard men shouting, spools creaking as the hoses were unwound. Suddenly her mind was clear, and a superhuman burst of will propelled her across the yard, across the porch floor.

“Stop! Don't go in there,” someone called. Anne glanced over her shoulder at the fire truck and saw a big man running toward her. He towered over everyone: a giant in black rubber coat,
Star Wars
mask, and yellow fireman's hat.

Anne rattled the door. Locked. She let out a cry of panic and frustration. From a nest of dry brown leaves she grabbed a smooth rock painted with the dark spars of a sailing ship by Anne herself, at age seven, and used by the family ever since as a doorstop. Smashing it through a pane of glass, she reached inside to find the dead bolt.

“Please, no!” the man shouted, running closer. Anne's hand shaking, she glanced back again. He had flipped the mask up, and Anne was shocked to see that his left cheek was melted, like wax on a candlestick. His eyes had battle in them—urgency and alarm.

If he wanted to stop her, he was Anne's enemy. Moaning with panic, she groped for the dead bolt. Finding it, she gave it a turn. And then she was inside.

T
HOMAS
X. Devlin of the Island Volunteer Fire Department stood outside the old house on Salt Whistle Road, watching black smoke seep through the attic vents. Flames lit the west windows on the second floor. He felt a shiver go down his spine, the way it always did at a fire ground. His skin grafts felt stiff, and he flexed his hands a few times, getting ready to work.

Car and truckloads of volunteers were streaming around the marsh, sounding a cacophony of air horns and sirens, a parade of pulsating blue strobe lights. Martin Cole lined up the cherry picker and Thomas Devlin was reaching for the roof saw when he spied the woman.

With her black hair and white nightgown, she was nearly invisible against the snow and night sky. She staggered up the hill, seeming to sway for an instant before charging onto the porch with the force of a locomotive and the grace of an apparition. Thomas Devlin shouted to her.

She glanced over her shoulder, and he bounded off the truck. She was trying the door, searching the porch for something. She was on a rescue mission; he saw it in her eyes. He crossed the yard in four strides, his arms out to catch her before she entered the burning house.

He called again, but a patch of ice tripped him up. He stumbled, just missed falling, heard the glass break. When he looked up, she had disappeared into the smoke.

Where was she heading? Upstairs? To a bedroom for a sleeping husband? Child? He'd seen the mad look in her eyes during the split second she'd glanced back. The woman had appeared small, desperate, and breathless. She wouldn't have much time before the smoke got to her. Thomas Devlin felt for his regulator, pulled down his face mask, and entered the house. No newcomer to fire, he had been a paid firefighter in Boston before coming to the island ten years ago. But every fire was new, every fire could mean death.

Blue-and-red strobe lights bounced through the smoke until he was three feet inside, and then everything was black. He crawled into the room, his breath through the air mask sounding artificial, like an iron lung. He envisioned the house's floor plan; he had been in plenty like it. It was the design of choice for working-class island families during the thirties, a tinderbox built to withstand hurricanes.

He fixed on the stairs, where he figured she was heading. Moving toward the fire, he heard something drop to the floor off to his left. He changed direction. Feeling his way along the wall, he touched her body before he saw her. He swooped her off the floor and cradled her in his arms. Through his thick rubber coat, he felt her chest rise and fall.

Outside, he held her close, to protect her from the bitter cold. Away from the smoke, he could see she was clutching a diaper bag. By the way she lay limp in his arms, he knew she was unconscious. Firefighters and police-band groupies milled around; Sarah Tisdale came running with blankets and a tank of O
2
.

“Anyone else inside?” Brian Grisky shouted.

“She went back after something,” Thomas Devlin said.

He laid her on one blanket and covered her with another while Sarah placed the oxygen mask over her face. Gently, he pried the bag from her hands, intending to look for clues. At the sight of the stuffed toy, the tiny dresses and sweater, his heart began to race. Almost instantly, she came to. She struggled to rise, then fell back. Her hand reached for the bag.

“There's a child inside the house?” he asked, shaking the woman's shoulder. “Where? Tell me where!”

The woman blinked, trying to swallow. She pushed the oxygen mask away. “The house is empty,” she croaked.

Soot coated the woman's pale face, making it nearly as dark as her hair. The smoke had swollen her eyes nearly shut. But even though she was half-frozen, half-asphyxiated, Thomas Devlin could see that she was lovely. She had a small body, but only a heart of steel could have made her enter that burning house.

“Where's the child?” he asked, watching her fumble through the soiled diaper bag. She suddenly regained the air of panic he had seen about her when he had thought she was on a mission of rescue. Her eyes darted back and forth, from one side of the bag to the other. She bit her lower lip.

And then she had it: the moment of relief. She threw her head back, then raised it again to look. Her hand closed around something, withdrawing it from the bag. A crumpled sheet of manila paper, one side covered with crayon marks. Tears squeezed out of the corners of her eyes.

“There is no child,” the woman answered, and she turned her head away.

If You Give a Girl a Viscount by Kieran Kramer
Some Wildflower In My Heart by Jamie Langston Turner
The Girl with my Heart (Summer Unplugged #8) by Amy Sparling
A Brooding Beauty by Jillian Eaton
Art is the Lie (A Vanderbie Novel) by Courtney Cook Hopp
Plague Ship by Leonard Goldberg
Slave of Rome, The Emperor's Obsession. Book Two by Carlsbad, Alex
Signwave by Andrew Vachss
All I Want Is You by Diamond
Love Is Blind by Lynsay Sands