The tapestry! Twink felt a rush of relief as an idea came to her. âDon't you get it, everyone? This is my project!' she said brightly.

Twink's pink hair tumbled about her face as she shook her head. âNo â making new friends! Trying to get on with people that I haven't got on with before. It's for the betterment of the school, just like Miss Shimmery said!'

There was a pause.

âI'm â I'm going to write a report on it, and maybe even a song about friendship â it's going to be completely glimmery!' said Twink in a rush. âI bet I'll even get a sparkle mark!'

She held her breath as the other fairies looked at each other.

Mariella stifled a yawn behind her hand. âTwink, where's that dew?' she called. âI really am getting
terribly
thirsty.'

Lola sniggered. Heat rushed to Twink's cheeks as she flitted to the doorway.

Sooze shook her head in disgust. âYou're mad, Twink,' she said flatly. âAll this for a sparkle mark! Why not just throttle Mariella? That
would
really
be for the betterment of the school!'

Twink had worried that Mariella would show her up again that evening, but once the fairies were all back in Daffodil Branch, Sooze and Sili started a flying pillow fight that soon had everyone screaming with laughter. Nobody would have noticed Mariella if she'd stood on a bed and shouted out her orders!

âTake that, Opposite!' shrieked Sooze, zooming up towards the ceiling as she threw a cotton-bud pillow at Twink. She missed, hitting Zena instead.

âOh!' Zena scooped up the pillow and hurled it back at Sooze, who darted nimbly out of the way. The pillow smacked one of the daffodil canopies, and Sili did a midair somersault and grabbed it, walloping it back at Zena.

âWe're going to get into trouble!' shouted Pix, skimming from one end of the branch to the other. âEveryone, stop! We're going to â oof!' A pillow hit her in the mouth. âAll right, you asked for it!' she laughed, grabbing it off the floor and entering the fray.

Twink laughed and shouted with the others, flinging pillows until Mrs Hover appeared in the doorway.

âI never!' she huffed, flapping her wings. âAre you first-year students at Glitterwings Academy, or babies in an acorn nursery? I want to see hair brushed and wings polished this instant, and all of you in bed in five minutes flat!'

The girls flitted to their bedside mushrooms, still giggling. Twink sat on her moss bed and worked her thistle comb through her dishevelled hair.

âTwink, can I talk to you?' whispered Bimi. The blue-haired fairy hadn't really joined in with the others, and now her expression looked earnest and worried.

Bimi hesitated. âI â I'm sorry about the way I've been acting,' she said. âI was hurt that you're not doing the tapestry with me, but â' She stopped, looking at Twink closely.

âBut something's wrong, isn't it?' said Bimi. She sat down beside Twink, her eyes grave. âTwink, I know your project isn't
really
making friends with Mariella! What's going on?'

Twink glanced over her shoulder. Mariella and Lola sat apart from the others as usual. Lola was busy plaiting her pale, wispy hair, and Mariella had her nose in the air, polishing her wings with the expensive lotion her mother had sent her.

Bimi's expression fell. âOh, Twink! Is it because I acted like such a wasp brain over the tapestry? I'm really sorry about that. You can trust me, I promise!'

On Twink's bedside mushroom, the drawings of her family smiled out at her â her parents, and Teena, her little sister. Twink sighed. What would they think about this mess?

âNo, it's not that.' She cleared her throat. âIt's â it's something that I can't tell anyone.'

Bimi rubbed her silver and gold wing against Twink's lavender one. âYou're not in some kind of trouble, are you?'

Twink stared down at her comb. Part of her longed to tell Bimi everything â but how could she? She knew how Bimi felt about wasps.

Bimi reluctantly returned to her own bed, slipping under her yellow-petal duvet. âTwink, whatever it is, you can tell me,' she whispered. âI want to help.'

âI know, but â but it's something I just can't talk about,' mumbled Twink. She climbed under the covers of her own bed, not looking at Bimi.

âI just can't, all right?' whispered Twink. âLeave me alone!' She flopped over on to her side, clutching her petal duvet around her miserably.

âGlow-worms out!' called Mrs Hover. The branch plunged into darkness, lit only by the moonlight streaking in from the window. Twink lay awake for a long time, listening for a sound from the bed next to her.

As the night slowly turned to dawn, Twink flew into Miss Petal's classroom. She was quite used now to the shadowy, empty branch, and she flew quickly to the broken window. Tucking the pot of honey under one arm, she eased the latch open and started to clamber through.

âWhere are you going?' demanded a voice. 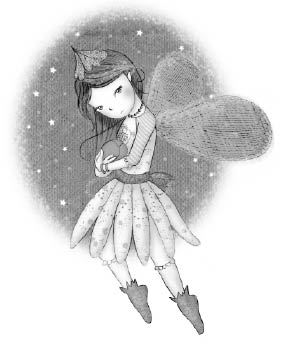 Stifling a shriek, Twink swung round in the air. Bimi hovered in the classroom doorway, wearing her nightclothes.

Bimi flitted into the room, stopping a wing's breadth from Twink. âI couldn't sleep. I was worried about you. Then I heard you get up and sneak out â so I followed you.'

Her eyes fell on the honey under Twink's arm. âWhat's that?'

âNothing!' Red-faced, Twink whisked it behind her back. âBimi, go back to bed! I'll tell you what's going on later, but â but I can't now.'

Bimi folded her arms across her chest. âAre you mad? I'm not going anywhere! And if
you
try to go somewhere without me, I'll fly straight to Mrs Lightwing!'

Twink stared at her in dismay. âBut I thought you were my friend,' she whispered.

âI
am
your friend!' cried Bimi. âAnd friends don't turn their backs when a friend's in trouble. Now, are we both going to go to wherever-it-is â or are we just going to fly back to bed?'

Twink swallowed.
How
could she let Bimi see Stripe? But he was waiting for her, expecting his breakfast. She had to go to him.

âOK, we'll go,' she muttered finally. Her heart felt like a stone. âBut, Bimi â' She stopped.
Please still be my friend. Please don't hate me for helping a wasp!

âNever mind.' Looking away, Twink tucked in her wings and squeezed through the window. âCome on, then, if you're coming.' 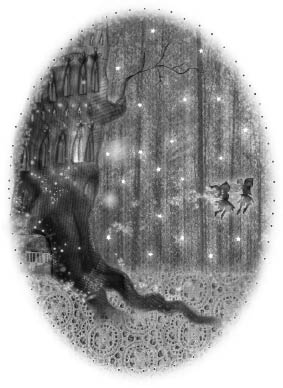 The night wind whispered through their wings as they flew around the back of the school. They came to the little dell, and Bimi's eyes widened.

âIsn't this where we found that old stump cottage?'

âThat's right,' said Twink glumly. She swooped down and hovered in front of the long blades of grass that covered its door. âAnd â and that's where we're going.'

Bimi flew down beside her. âIs something in there?' she breathed, peering into the gloom.

Before Twink could answer, a buzzing noise came from inside the stump. Bimi stiffened. âOh, Twink! It's not a â'

Twink bit her lip and darted inside. âGlow-worm on,' she said to the lantern that hung near the ceiling. Immediately, a cheerful light filled the worn little room.

Twink gasped. Stripe was sitting on the table! How on earth had he got there?

When Stripe saw her, he gave a little hop, fluttering his wings. Suddenly he lifted into the air. His wings wobbled a bit . . . but he was flying! Forgetting Bimi, Twink ran to the wasp and scooped him up in a hug.

âOh, Stripe!' she cried. âI knew you could do it!' He hummed happily, nestling into her arms.

âA â a wasp,' whispered Bimi. Twink turned. Her friend had followed her inside, and now her face was as pale as snow. Bimi backed away towards the door.

Twink flitted over to her. âBimi, Stripe was hurt, and he called to me. I couldn't just ignore him! And â and look how sweet he is.' She held the wasp out to her friend.

Bimi stared at the wasp without moving. âWhat do you mean, he called to you? Wasps can't do magic!'

Twink shook her head. âI don't know. He hasn't done it since. But he really did call to me. And then when I found him, his wing was horribly broken. I couldn't just leave him in the wood!'

Twink rushed on, âSo â so I brought him here. And I managed to heal his wing, but he's been too scared to fly â until now, you clever thing!' she added to Stripe, nuzzling his fur with her nose. 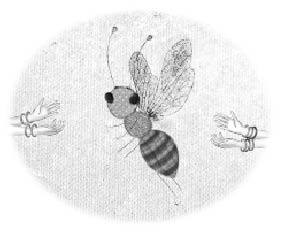 âAnd Mariella found out, didn't she?' guessed Bimi. Flitting over to one of the spotted mushroom stools, she sank down with a sigh. âOh, Twink! Why did you have to get involved with a
wasp
?'

Stripe grew very still, staring at Bimi. Twink knew his feelings were hurt, and her wings stiffened. âI told you, he was injured!' she snapped. âAnd don't say
wasp
in that sneery way â maybe he's a wasp, but he's nicer than some fairies I know.'

For a moment she and Bimi glared at each other. Then Stripe pulled himself out of Twink's arms and flew shakily across to Bimi, landing with a
plop
on the mushroom table in front of her.

Bimi gave a shriek. âOh! Get it away from me!' She shrank back in her chair, too frightened to move.

Stripe crept across the table until he was next to her. Slowly, he touched Bimi's arm with one of his thin black legs. Twink held her breath as the two of them gazed at each other, still as statues.

Twink came over to them. âHis fuzz is really soft, too,' she offered.

Bimi moved her hand towards Stripe's back, and then jerked it back again. âHe won't sting me, will he?'

âOf course not!' Twink assured her. âHe's as friendly as you are.'

Bimi took a deep breath and tried again. When her hand rested on Stripe's back, she gasped in surprise. âOh â it's like a caterpillar's fur!' She stroked the wasp gently as he hummed.

Twink sat down on the other mushroom, propping her elbows on the table. âDo you see, Bimi? I couldn't have just left him there.'

Bimi's cheeks reddened. âNo, I suppose you couldn't have. That was stupid of me. I'm sorry, Stripe,' she added to the wasp. He pushed against her hand with his head, and Bimi smiled.