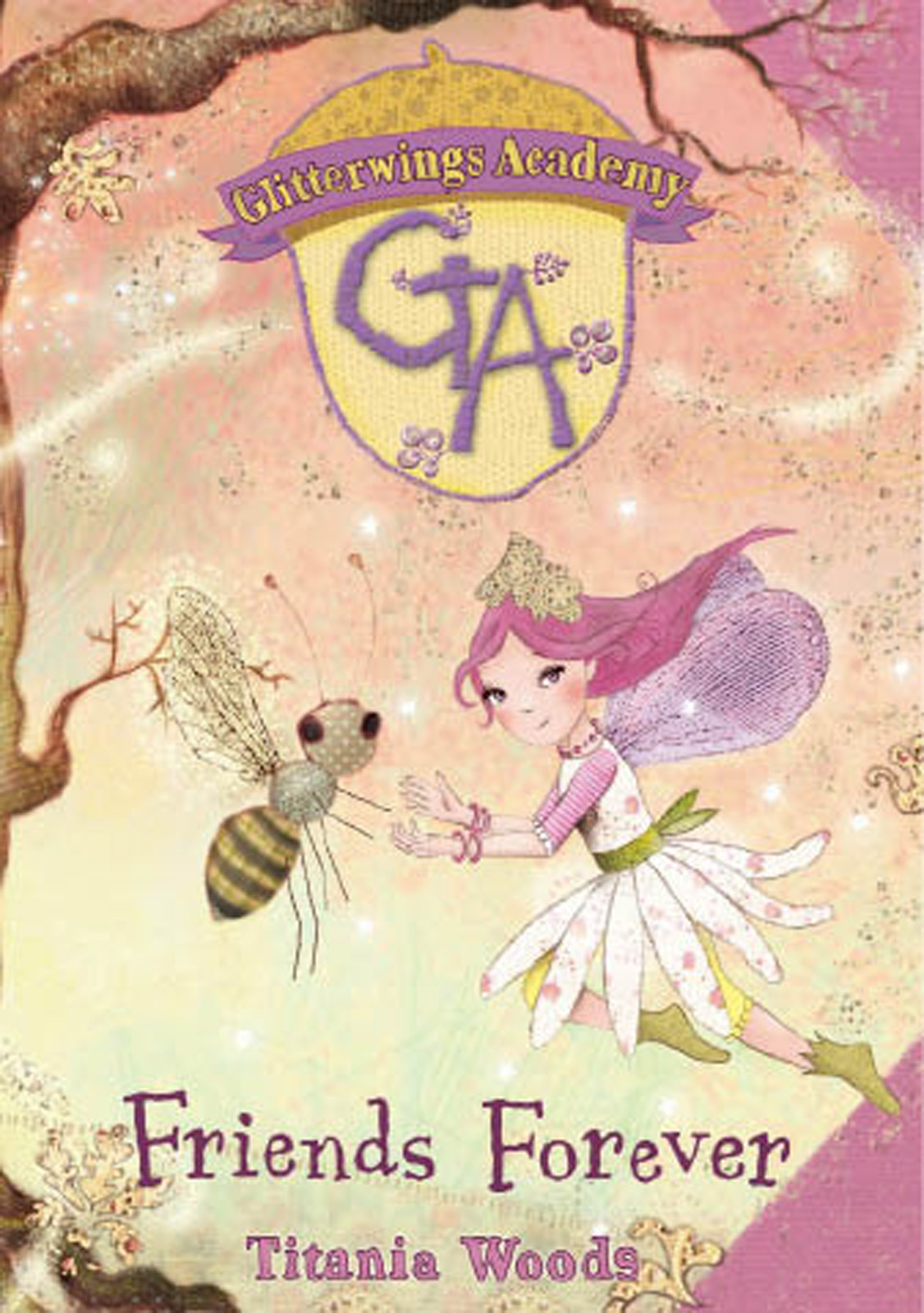 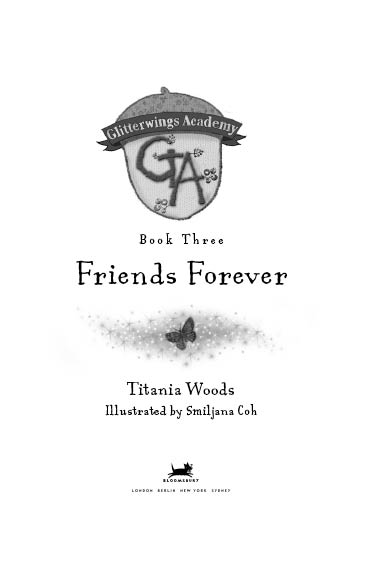 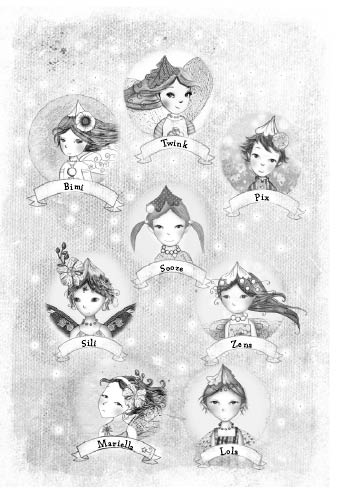 âNow then, class.' Madame Brightfoot hovered in front of the Daffodil Branch fairies and patted her bright purple hair into place. âToday we learn a new dance! Today, we learn how to find creatures in distress.'

Twink Flutterby shot an excited glance at Bimi, her best friend. âGlimmery!' she whispered. It was a fairy's duty to take care of nature, but as first-year students, Twink and her friends hadn't had many chances to do this yet.

A thrill rippled through Twink's wings. âOh, I hope so! I'd love to tell my parents that.' Twink's parents were both Fairy Medics, and it was Twink's dearest wish to follow in their wing strokes some day.

Madame Brightfoot's Dance class was held in an enchanted ring of mushrooms near the wood. Behind them, the great oak tree that housed Glitterwings Academy was ablaze with autumn, its leaves on fire with red and gold and orange. Hundreds of tiny windows wound their way up the tree's trunk, and the grand double doors at its base looked shiny and welcoming.

The Daffodil Branch fairies stood in a circle, holding hands.

âFlower position!' Madame shot up into the air, her spiderweb dress shimmering.

The fairies opened their wings so that the very tips of them touched. Twink squeezed Bimi's hand. Across the circle, she saw her friend Sooze bouncing on her toes, and she grinned. Sooze loved trying anything new!

Clasping her hands, Madame slowly sank back down to earth. Her voice was low and solemn. âNow, this dance is very different from the others you've learned. It is a most serious dance.'

She looked around the circle, her expression grave. Twink swallowed. The class grew very still as they all gazed back at her.

Twink shut her eyes, listening closely as Madame went on.

âYou must all concentrate together on hearing any nearby creatures in distress â and with the magic of the dance, you'll be able to understand what they're telling you if they respond. Now . . . two skips left, two skips right, dip, twirl, and rise.'

They began to dance. The air felt alive with sparkles as the magic gathered.

Does anything need our help?
thought Twink as her feet moved in the air.

They repeated the dance over and over. The magic swelled until it felt like a thousand tiny bubbles swirling around them â and still the dance went on. Wasn't anything going to happen?

Are there any creatures that need our help?
thought Twink again, concentrating harder than ever.
We want to help you!

Suddenly she heard it: a small, frightened voice inside her head.
Yes!
it
called.
Help me, please!
Twink gasped, and almost dropped Bimi's hand.

Where are you?
she thought eagerly.

The little voice came again.
In the wood! Please help me!

We will!
thought Twink as loudly as she could.
Don't worry, we're coming!

Twink's eyes flew open. She and Bimi stared at each other as they drifted down to the ground.

âDid you hear it, too?' whispered Twink.

Bimi nodded, her eyes wide. âIt sounded so scared!
What was it?'

âYou might well ask!' said Madame, overhearing her. She shook her purple head. âAh, this is a most unfortunate thing. But it is a lesson you all must learn sometime. Who can tell me what that voice was?'

The class stared blankly at her. In the silence, a large bumblebee bobbed past. Finally Pix raised her hand. âWas it a sort of bird?'

âNo, not a bird!' said Madame. The fairies looked at each other in surprise. Pix always got the right answer.

âIt was something dreadful, something awful!' A shiver ran through Madame's silver wings. âDear children . . . that voice you heard was a
wasp.
'

A wasp! A startled gasp ran through the class. Twink felt like icy water had been thrown over her. The Great Wasp Wars had ended centuries ago, but the fairies had never forgotten the terrible things the wasps had done.

Madame nodded grimly. âYes, a wasp. Now you know what they sound like. Never forget! It is a voice to shun!'

Twink bit her lip as she thought of the tiny voice, pleading for help. Maybe it had been a wasp, but it had sounded so alone â so frightened. She slowly raised her hand. 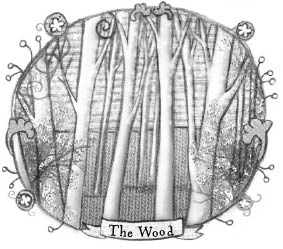 Madame's eyes bulged. She opened her mouth and shut it again.

Twink gulped. âI mean â well, I know it's a wasp and everything, but it's hurt. It's out there in the wood somewhere, and â'

âEnough!' cried Madame, flinging her hands dramatically over her ears. âWe do not help wasps! No fairy has helped a wasp for a thousand years â they are treacherous, vile creatures.'

Twink's wings felt clammy. Everyone was staring at her, wide-eyed with horror. Even Sooze looked alarmed. âI â I just thought â we're supposed to help nature â' she stammered.

âNot
that
sort of nature,' snapped Madame. âNot another word, Twink! Now, everyone join hands and we'll do the happy breeze dance, to blow these unpleasant thoughts away.'

They did the happy breeze dance, but it didn't cheer Twink up much â not even when the merry wind tickled her wings and toes. As they flew back to school after class, she glanced over her shoulder at the wood, wondering where the wasp was. Was it badly hurt?

Bimi jostled her with a wing. âTwink, you're not still thinking about that wasp, are you?'

âOh, Twink!' Bimi made a face. âIt was probably only
pretending
to be hurt, to trick us! You can't trust wasps â everyone knows that.'

They flew into the school with the rest of Daffodil Branch. Inside, Glitterwings was a high tower of golden light, with fairies darting in and out of its many branches.

Their wings blurred as they jetted upwards. Their Fairy Dust lessons were held near the very top of the tree â it was always a race to get there on time after Dance class!

Twink banked left to avoid a chattering crowd of hovering Third Years. âBut, Bimi, listen!' she panted. âWhat if it wasn't
pretending? What if it really needed help?'

Bimi shook her head. âThen let another wasp help it! Honestly, Twink, what's wrong with you? Think about the Great Wasp Wars!'

âI
know
I am!' laughed Bimi in exasperation.

With a quick hop, they landed on the ledge of their Fairy Dust classroom. Smoothing her wind-messed pink hair, Twink flitted to one of the spotted mushroom seats.

Bimi sat beside her, and the two girls smiled at each other. They had been best friends since their first term at Glitterwings, and Twink knew that no one was more sensible or fair-minded than Bimi.

Bimi was also one of the prettiest fairies in the school, with her midnight-blue hair and gold and silver wings. Twink often felt very plain beside her. Her own wings were just boring old lavender!

âWell,
that
was a glimmery Dance lesson, wasn't it?' Sooze swooped into the room and landed with a bounce. âTalking to a wasp â ugh!'

She gave an exaggerated shudder, and several of the girls laughed. The young fairies all lived in Daffodil Branch together, and all wore yellow or white daffodil dresses, along with the school's jaunty oak-leaf caps. 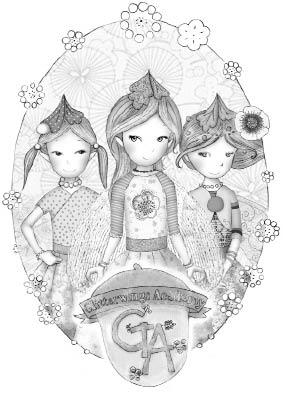 Miss Sparkle arrived, and the class took their seats. âGood morning,' she said in her dry voice. âToday we are going to discuss how to use fairy dust in the dark.'

Twink held back a groan as she pulled out her pink petal-pad to take notes. She could hardly wait to be a second-year student, when they could actually
use
fairy dust, instead of just talking about it!

âNow then.' Miss Sparkle folded her thin white wings behind her back and regarded them sternly. âAlthough fairy dust glows in the dark, this is only a reflection of the moonlight. Therefore, on moonless nights, you must . . .'

Twink's snail-trail pen slowed as she thought of the wasp, pleading for help.

No
, she thought firmly.
Bimi's right. It was just a trick.
And taking a deep breath, she started to write again.

The Great Branch was the largest branch in the school â a long, wide space lined with mossy green tables and spotted mushroom seats. A different flower hung over each table for each of the dorms, so that the Branch was like a springtime garden, bursting with colour. Glow-worm lanterns hung from the ceiling, and arched windows let in the sunlight.

Dinner that night was a crunchy autumn nut cake, served with a sweet nectar sauce. The fairies murmured in appreciation as the school's butterflies flowed into the Great Branch, lightly dropping an oak-leaf platter on to each table.

Twink loved nut cake, but somehow she didn't feel very hungry. She glanced at the windows. Twilight was coming. Was it very dark in the wood, she wondered?

âWhat's up, Opposite?' asked Sooze from across the table.

Sooze had bright lavender hair and pink wings, and Twink had the opposite, hence Sooze's nickname for her. The two girls had been best friends once, and were still close â even though Twink knew that Sooze wasn't always very dependable!

âStill mooning about that wasp, I suppose!' sneered a pointed-faced fairy from the end of the table.

Mariella! Twink bit back her response.

The term before, the entire first year had stopped talking to Mariella when Twink and her friends had caught her out in a nasty prank she'd played against Bimi. Mariella's cheeks reddened at the mention of it. Clapping her pale green wings shut, she scowled down at her acorn cup.

Her friend Lola, sitting beside her, squeaked, âBut Mariella didn't do anything â it was Twink! Imagine wanting to help a wasp! That's something only a real wasp brain would do.'

Lola laughed loudly at her own joke. Mariella snickered, and flipped back her silvery-green hair.