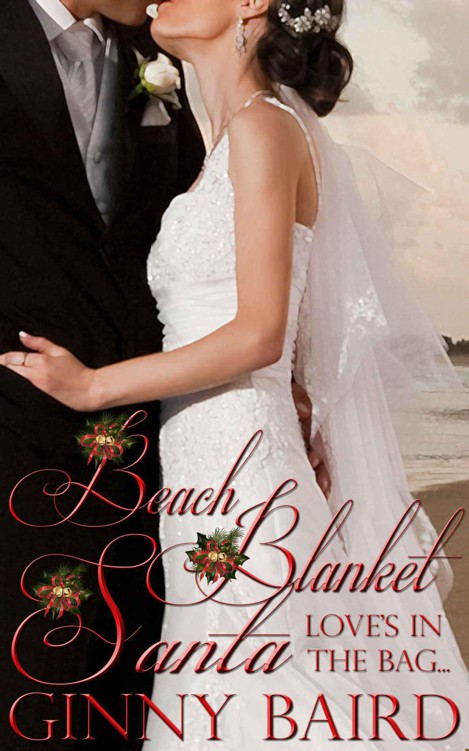 This ebook is
licensed for your personal enjoyment only. This ebook may not be resold or
given away to other people. If you would like to share this book with another
person, please purchase an additional copy for each recipient, unless this book
is a participant in a qualified lending program. Thank you for respecting the
hard work of this author. To obtain permission to export portions of the text,
please contact the author at
[email protected]
.

Characters in
this book are fiction and figments of the author’s imagination.

Romance writer Ginny Baird has published novels in print and
online and received screenplay options from Hollywood for her family and
romantic comedy scripts. Her fiction has been published in the US, Australia,
Brazil, Denmark and Norway, and translated into many languages. She is an
award-winning writer and the bestselling author of several romantic comedies,
including novellas in her HOLIDAY BRIDES SERIES. Prior to selling her first
romance novel to Kensington Books in year 2000, Ginny wrote suspense fiction,
which she's recently reissued under the pen name Gabby Grant. You can learn
more about her by visiting her website
http://www.ginnybairdromance.com
.

How to Marry a
Matador

Real Romance
and The Sometime Bride

Santa Fe
Fortune and How to Marry a Matador

“You
know what you need?”

Matt
Salvatore stared into his brother’s deep blue eyes. They looked so much alike,
people sometimes mistook them for twins. In fact, Robert was two years older and
an inch shorter than Matt. Why then, did Matt get the feeling he wasn’t
measuring up? “No, but I suppose you’re going to tell me.”

Robert
pushed back in his leather chair. They shared a lot of things between them, like
a law practice in DC and the same dark hair and broad shoulders. From the frown
on Robert’s face, he was growing weary of bearing Matt’s weight. “You need some
time away, man. A break from this scene.”

Matt
flagged a palm at his brother. “Slow down there, pal. A man is dying, and all you
can do is dance on his grave.”

“By
bringing up Katya at every turn?”

Robert
sighed. “It’s been six months, buddy. She left you before your birthday in
June.”

“Yeah,
and that was awesome, wasn’t it?”

“It
was…less than nice.” His lips twisted in a wry smile. “Never can trust those
Russians.”

“She
was a foreign correspondent. Not a spy.”

“Seemed
to slip in and out of those shadows pretty easily.”

Matt
ran a hand through his short, wavy hair, knowing Robert was right. Katya had
been nothing if not slippery—with the truth more than anything else.
She’d spent countless nights chasing after hot stories in Washington. It was
only by mistake that Matt had learned of her questionable research tactics.

“What was that last guy’s name? Carl
Benton? Wasn’t he running for Congress or something?”

“Well,
at least that’s some consolation.” He leaned forward across his mahogany desk.
“Bro, I’ve got to tell you, I’m starting to worry. This Katya thing has got you
all eaten up. And for what? She’s just not worth it.”

“I
apologize if I haven’t been at the top of my game.”

“But
things will get better. I swear. I’ll turn this ship around.”

“Sure
you will.” Robert’s face brightened. “All you need is a little shore leave.”

Robert
massaged his square jaw and studied him. “Straight to the Outer Banks, I hope.”

“I
think you should go there, take a breather.”

“Who
goes to the beach in December?”

“Nobody.
That’s what’s great. You’ll have no one to bring down with your sour mood.”

Robert
laughed good-naturedly. “You know what I’m saying. It’ll be good to have some
time away. Read some of those dirty spy novels you’re so crazy about.”

“What
is it with the espionage?”

“Okay,
okay. Cast your reel out, then. Whatever floats your boat. Just get your tail
out of Dodge for a while. It’ll do you good.”

Matt
understood his brother was trying to help, but everyone knew depression loomed
large around the holidays. With him already feeling down, was being even more alone
really the answer? “You want me to spend Christmas by myself?”

Robert’s
expression softened. “That’s not what I meant at all. I just want you to go
regroup for a week, then join us in Maryland. Margaret and I want you to spend
Christmas and New Year’s with us.”

“And
your new baby,” Matt reminded him.

Because
babies screamed all night, as far as Matt recalled. They also needed diaper
changing. This was sounding less and less like the dream bachelor vacation. “That’s
really good of you,” Matt said, standing. “But I’ve already made plans.”

Robert
pinned him in place with his gaze. “Name them.”

“Well,
I was thinking of…” Suddenly it dawned on him that he didn’t need to make
excuses. Matt couldn’t go to the beach. Christmas was always Elaine’s week
there. Elaine was Robert’s first wife, and the one asset neither could bear to
liquidate had been their beach house. Besides, with the real estate market
having tanked, their oceanfront property was practically under water. So they’d
opted to keep it awhile, carefully orchestrating a calendar of his-and-hers
usage dates, so both could enjoy it without having to run into each other. “I
thought Elaine always took Christmas week?”

“Usually,
she does. But this year, she’s getting married. Remember? She’ll be on her
honeymoon. The place is all yours!”

Matt
started to think about that. The gentle melancholy of the seashore… A few six-packs
of beer. Surf fishing in the waves. Letting his beard stubble grow for a week.
Skipping out on the suit and tie routine… And finally—
finally
—forgetting about Katya.
After a full week of that, he’d probably feel fine handling Christmas at the
beach solo. Or, even heading back to Maryland if that was what he decided to
do. Neither he nor Robert were going to Chicago this year. They and their
siblings had pooled together to send his folks on a forty-year-anniversary trip
to Tuscany’s lake region. It would be one of the first seasons in memory the
greater Salvatore clan hadn’t gathered together to ring in the New Year, a plethora
of grandchildren bustling about and blowing plastic horns. Of course, everyone
had agreed it was worth it. There’d been tears in his mom’s eyes at
Thanksgiving when Robert, as the eldest, had handed over the airline tickets
and broken the news. Everyone deserved the kind of happiness their parents
shared. They’d stuck together through all kinds of weather and seemed to care
for each other even more now than Matt had recalled as a kid.

“What
about the Barnes case?” he asked his brother.

“I’ve
put our team of interns on it. They’ll be busy pulling documentation together
until after the first.” He shot Matt an encouraging grin. “There’s really not
much left for you to do here…other than pout.”

“Hey!”
Matt didn’t pout. Did he? Scowl a little, perhaps. Take on the brooding look of
an artist. Appear mysteriously morose… But pout? Not on your life he didn’t. If
this was what Katya had reduced him to, it was way past time to change it. So,
yeah, maybe he’d been deluded into believing she was the love of his life. What
with that sexy accent and sharp wit, she’d had him practically from hello. But
now she was gone. Long gone, and it was time he stopped rehashing the past. It
was ironic that the one woman he’d really fallen for had been the one to walk
out on him. While Matt had never purposely hurt anybody, he did have a history
of the being the
guy who was good with
good-byes.
He’d become really adept at sensing when a woman was getting in
deep and knew it was kinder to cut things off early rather than unfairly lead
somebody on. Matt wasn’t sure what he was looking for, but he believed he would
know it when he saw it. With Katya, he’d just been vision impaired. Not that
he’d ever let
that
happen again. “Give
me that key.”

Robert
blinked in surprise. “Just like that? You’re leaving already?”

Matt
held out his hand, and Robert slid open his desk drawer, extracting a key chain
with a dangling fake sand dollar attached. “Merry Christmas, brother,” he said,
slapping it into Matt’s palm.

“Thanks.
And Happy New Year to you.”

“Wait
a minute. You’re not coming back to…?”

Robert
eyed him suspiciously. “You got another girl stashed away somewhere I don’t
know about? Someone you’re taking there with you?”

“You
wish,” Matt said.
I wish
, he thought.
But this year, he’d have no such luck. Matt had grown weary of the dating game.
That fiasco with Katya had been the final blow. He’d already taken her home to
meet the family
.
His big Italian
family, grandmother and all. And she’d apparently bedded the congressional
hopeful less than a week later. Matt was supposed to be smart, primed to see
things. His work as a corporate attorney demanded keen mental acumen. But every
single bit of his brainpower had let him down when Katya had batted her pretty green
eyes.
Well, no more of that,
Matt
thought, clutching the key. He was done with women for the next little bit.
After this breather at the beach, he’d return refreshed to focus on his career.
Robert really had been doing more than his share lately. And with a new baby at
home, it simply wasn’t fair. By all accounts, Matt was the one who should be
picking up any extra slack. And he planned to see to it post haste.