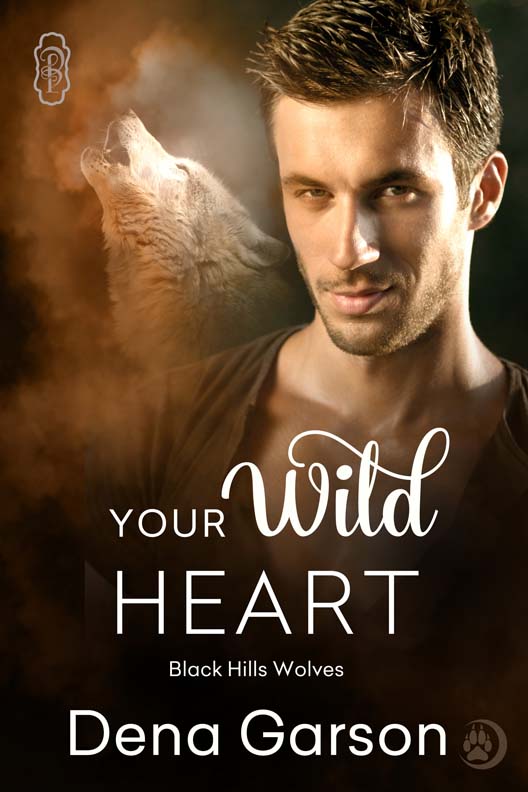 The unauthorized reproduction or distribution of a copyrighted work is illegal. Criminal copyright infringement, including infringement without monetary gain, is investigated by the FBI and is punishable by fines and federal imprisonment.

This book is a work of fiction. Names, characters, places, and incidents are the products of the author’s imagination or used fictitiously. Any resemblance to actual events, locales or persons, living or dead, is entirely coincidental.

All rights reserved. Except for use in any review, the reproduction or utilization of this work, in whole or in part, in any form by any electronic, mechanical or other means now known or hereafter invented, is forbidden without the written permission of the publisher.

Look for us online at:

What a Wolf Wants

Portrait of a Lone Wolf

Wolf on a Leash

This one is dedicated to my boys—my greatest source of joy and frustration. My wish is that you always know you are loved more than you can possibly comprehend.

I also need to send out a big thank you to Rebecca R. and Virginia C. for getting me involved in the Black Hills Wolves! Hugz!! And to Hollie Neighbors for helping me wrap my head around the wild world of the Black Hills National Park and National Forest.

From the shadows of the surrounding foliage, Wyatt Powell watched the slip of a woman move about her campsite with ease. The business card she had left with the girls at the ranger office read,
Dr. Isabelle Acker, Wildlife Biologist
. It seemed, she was used to camping outdoors.

But even if she had been camping for over five years, it was damn foolish of her to be out here alone.

Normally, he wouldn’t have paid much attention, but when he’d overheard the girls saying she was well known for her study of wolves, he’d been compelled to investigate.

Everyone knew there were no wolves in the Black Hills.

For generations, his pack had cultivated that belief. And in truth, there were no wolves. At least not what one would call a “normal” wolf. Wolf shifters were a whole other matter.

So, what brought Dr. Acker here?

She’d set up her camp in a secluded spot, well away from the established sites. Perhaps she wanted privacy. But for what?

The longer he watched, the more fascinated he became by her. It wasn’t because she seemed at ease in the outdoors. Nor was it just a physical attraction. Sure, she was pretty for a human but not in a remarkable way. She was an average height with an athlete’s build. Her plain brown hair had been pulled into a simple ponytail, but it did glitter a bit when she stepped into patches of sunlight.

Yet something about her had captured his interest. Both man and beast wanted to learn more.

He was about to retreat into the woods when he saw her gather a towel and a few bathing items and head to the nearby stream. His conscience argued he should leave and allow her some privacy, but the bulge behind his zipper insisted on following her. Part of him wanted to know how much of a nature lover she was.

Like a deer, she picked her way over the rocks until she found a spot next to the river. Before sitting, she slowly turned her head in both directions scanning the area.

Wyatt had been taught by his Sioux grandfather the value of patience when tracking prey. Or a foe. Despite his base attraction, he had yet to determine which she might be.

Seemingly satisfied by what she saw or didn’t see, Isabelle reached for her ponytail and pulled the band out. Her hair cascaded in waves down her back. Copper flecks became apparent now that the strands were no longer confined. She pushed her shorts off and then her denim shirt, leaving her in nothing but a tiny pair of panties and a white undershirt. Neither of which covered much.

He revised his earlier thought about her being unremarkable. The swell of her breasts beneath the clingy fabric made his mouth water. He lifted his nose into the air to catch her scent but picked up nothing except the expected foliage and damp earth. Odd. Must be too far away. Satisfied no one else could see the treasures she had revealed, he adjusted his crotch to ease his discomfort and crept closer.

Sitting on the rock next to the stream, she looked as if she could have been in any bathroom in the world not the wild outdoors where dirt, bugs, and animals were the norm.

When she dipped her feet into the water, she jerked them away before easing them all the way in. Wyatt knew from experience the water in this part of the park would be chilled despite how hot it had been lately. Using her hand as a scoop, she rinsed her arms and legs. Next, she splashed water on her face and ran her hands through her hair. With her head bowed, she gazed into the water as if debating something.

Was she thinking of taking a swim? The stream was not deep, but the current was stronger than one would expect.

Before he could finish the thought, Isabelle hopped into the water.

Wyatt shot to his feet and ran to the river’s edge to make sure she hadn’t fallen on the rocks.

He scanned the surface of the water but didn’t see her. When she came up for air, she reminded him of the Sirens Odysseus had faced on his voyage home.

Mesmerized, Wyatt froze. Even though he could only see her from the waist up, the blood in his head pounded and rushed south to his groin, leaving him off-kilter. Thankfully, her back was to him so, when she ducked under the water again, he had a chance to catch his breath and regain control over his raging hormones.

When she came up for air the second time, she faced him. Her eyes widened, and her mouth fell open at the sight of him standing on the bank overlooking the river. She sank lower into the water and narrowed her gaze.

“Do you realize you’re polluting one of the park’s water sources?” His voice came out far more steady than he felt.

She kept her body hidden beneath the waterline. “Not any more than a deer or bear that wanders into the water. I’m not using any soap or chemicals.”

Her eyes narrowed. “And you are?”

He hopped down to a flat spot, level with the water’s edge, then bent and stuck his hand out to her by way of greeting. “Wyatt Powell, park ranger.”

She looked at his outstretched hand then into his eyes. “Nice to meet you, Ranger Powell. But if you don’t mind, I think I’ll stay right here.”

He shrugged and stood upright. “Suit yourself.” He stepped away from the water. “Nice day today. But I’m willing to bet that water’s still pretty cold. It rarely gets above sixty, even by the end of the summer.”

“That I believe,” she mumbled. “Did you need something, Ranger Powell? Or do you make it a habit to drop in on park visitors at inconvenient times?”

The underlying sassiness in her tone appealed to him. “I do keep an eye on what goes on in the park. I understand you’re a biologist,” he said, switching topics.

“Where are you from?”

He nodded. “So, what brings you to our part of the country?”

She shifted positions. Because she lay on her belly, he had a nice view of her backside despite the moving water. “I, uh….” She glanced at her clothes and towel on the bank not far away. “It’s a little colder in here than I like. Do you mind if we finish this conversation at my campsite?”

He gestured to her things, pretending innocence of her predicament. “Sure. I’m in no rush.”

“No, I mean….” She glared at him, then harrumphed and rose to her feet.

Wyatt’s breath lodged in his chest when he saw her shapely figure through the T-shirt clinging to her skin. Her rosy nipples stood erect thanks to the cool water and shone like beacons through the almost transparent material.

She swept her hair to one side and twisted the water from it. When their eyes met, defiance flared like a candle. He had provoked her, but she met his challenge and raised the stakes.

When she took those few steps to the bank and reached for her towel, he had a perfect view of her backside. His growing erection forced him to rearrange his crotch. Giving any indication of how she affected him would do nothing but fuel the fire simmering between them.

He needed to keep his wits to determine how much of a threat she might be to the pack.

“Is that what people from Georgia swim in these days?” he called across the river.

She glanced over her shoulder as she wrapped the towel around her chest. “Only when we think we’re alone and don’t have a swimsuit.”

“I don’t believe you’re ever completely alone out here,” he cautioned.

She gave him another hostile glance as she pulled her shorts on. “Birds and wild animals don’t count.” Keeping her back to him, she pulled her wet shirt off and the dry one on. After gathering her things, she faced him. The smile she gave him appeared forced.

“I feel the need for some coffee. Would you care to join me?” Her voice oozed exaggerated Southern charm.

Her challenge was too good to pass up. “Sure.” They marched toward her campsite in silence until they reached the narrowest part of the river. There he crossed to her side and asked, “Is there something wrong with the public campsites?”

“Most people prefer to be near the restrooms and showers, but you chose all the way out here. Why?”

“I want to see as much of the natural state of the park as possible. I can’t do that around cleared areas filled with dozens of people. Especially when half of them have no respect for the environment.”

“And you do,” he said it as a statement, not a question.

“You know it’s not safe for a woman to be out in the middle of nowhere. Alone.”

She stopped. “Look. I heard enough arguments from my dad and my brother before I left. I am well aware of the risks.” Her hand flailed as she spoke. “I’ve been hiking and camping for more years than I can remember. I’m in better shape than most men, and I’ve taken enough self-defense classes that I could teach them by now.” Planting her hands on her hips she declared, “I can take care of myself.”

He raised his brow. “I assumed you could. Otherwise, you wouldn’t be here. But that doesn’t mean it is without risk, and I am obligated to point it out.”

“Fine.” She resumed her march. “You pointed it out. Thanks.”

Taking the lead in the conversation, she quizzed him about his background, his job, and how long he’d worked for the park. Wyatt had the feeling she was sizing him up for something. When they reached their destination, she waved him toward the chairs under her trailer’s canopy.

“So, tell me. Have you noticed any environmental changes around the area?”

She flitted from her trailer to her table, gathering things for the coffee. “Climate changes, increased rainfall, more flowering plants, less bees. Anything that could impact the overall habitat of the region.”