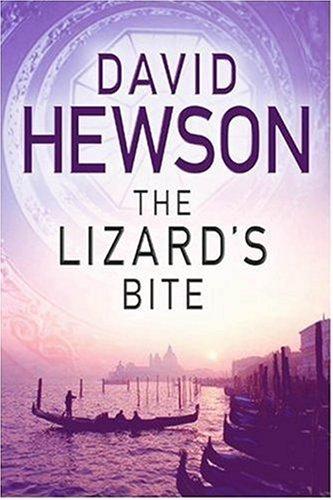 On an August night on a small island near Venice, a fire explodes in a glassmaking shop. When help arrives, two people are dead, a rich Englishman is implicated, and investigators from Rome are assigned a case no one wants them to solve… In this spellbinding new novel featuring Detective Nic Costa, author David Hewson weaves together the rich fabric of Europe’s most beguiling city with a riveting tale of passion, corruption, and the poisonous bite of betrayal.

On their private island, the Arcangelo family defy the world: living in a decaying palazzo, making glass in a terrifying, archaic furnace, watching their absurd exhibition hall sink into disrepair. But now the world is coming to their dying outpost in a crumbling corner of a Venice that tourists never see. Police boats and vaporetti bring investigators, curiosity seekers, and one man who plans to own the property himself. With two family members consumed by the foundry fire, both mystery and opportunity have been bared to the bone.

On special assignment from Rome, Detective Nic Costa, along with his partner, his boss, and a dogged pathologist named Teresa Lupo, is getting in the way of progress, Venetian-style. They know that Uriel Arcangelo and his wife were murdered. They know that a predatory Englishman must be a suspect, as is the family of the murdered woman. And while everyone wants the Roman cops to give up and go home, they can’t — because a matter of desire, death, and lies has just turned murderously on one of them…

A tale as bewitching as its lush backdrop,
The Lizard’s Bite
is an astounding alchemy of superb writing, vibrant atmosphere, and sheer, gripping suspense. 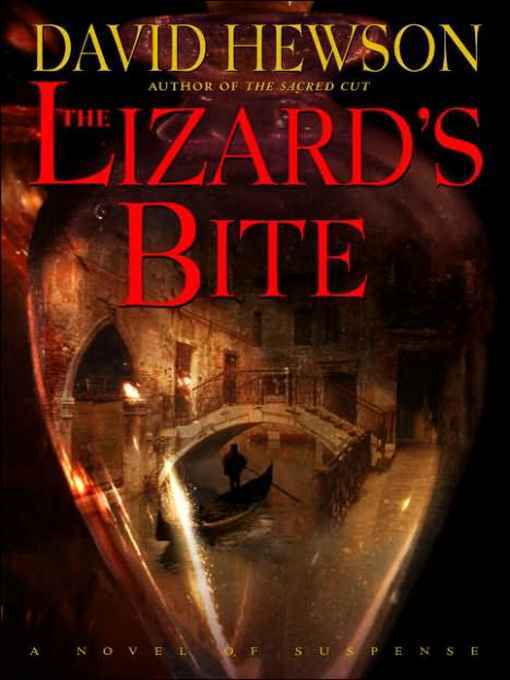 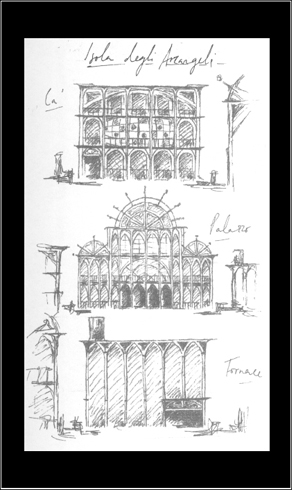 PART ONE
The Inferno

I
N THE SHIFTING DARKNESS OF THE VESSEL’S BOWELS, low over the undulating black water, the animal waited, trembling. The man, the much-loved man, his master, worked around him, puzzled by the creature’s fear, clucking sounds of consolation, not noticing events on the quayside above. Men possessed, the animal understood, a weaker, coarser form of consciousness. Sometimes it seemed men scarcely noticed the presence of blood at all…
.

FOR AN INSTANT the black breath of the sirocco eased. The Isola degli Arcangeli — small, solitary, shining in the brief glimpse of moonlight — was still. Then the night wind returned, more fierce and relentless than before. The fragile frame of the grandiose palazzo shook beneath the onslaught. Shards of brittle glass tumbled from the shutters half-finished by the restoration men only the day before. Close by, clouds of sandy dust raked the golden stone of the Arcangeli’s mansion, hammering at the ornate windows arching out over the lagoon. On the other side of the palazzo, in the foundry, once the mother lode of the Arcangeli clan’s fortunes, the blast chased down the single funnel chimney, probing for some weakness, like a giant from the world beyond breathing into a fragile paper bag, rattling the rickety high doors, bending the misshapen glass roof with its brittle span of supporting ancient timbers.

The high-summer gale from the Sahara had been over the city for three days now. Dry choking dust lurked in its belly, working its way into the crevices of the
fornace
, disturbing the precious process, looking for something clean and bright and perfect to despoil. The daily yield of good glass, which had never been on target of late, was as low as he could remember. The disturbance was everywhere. Dust devils swirled over canals and chased each other in and out of the island’s constricted alleys. Beyond Murano, across the lagoon, in Venice proper, churning black water fetched by the wind now lapped insistently over the stonework at the edge of the Piazza San Marco.

The August storm took away the month’s familiar enervating heat and put something alien in its place. Even now, at just after two in the morning, under the frank gaze of a full moon stained rusty by the storm, the lagoon seemed breathless, starved of oxygen. He wasn’t the only one awake, panting in the dry heat. Beyond the Isola degli Arcangeli lay an entire city choking on the sirocco’s sand-filled wheezings. He listened to the storm’s anger as it threw itself upon the fragile shell of the foundry. The wind’s sighs seemed to vibrate to the rhythm of the deep, smoky gasps of the hulking primitive furnace in front of him.

Half loved, half hated, the leviathan stood at the heart of the solitary room, roaring as the wind’s blasts fought their way down its crumbling brick chimney and raked their scorching breath across its embers. He didn’t need to look at the temperature gauge to see the fire was too intense. The hemisphere of the interior was approaching a white, incandescent heat too painfully bright to look at. In its maw the costly crock of nascent slow-mix glass, ground
cogoli
pebbles from Istria and the soda ash of burnt seaweed, just as a Murano maestro would have demanded five centuries before, would be churning uncertainly, part of a mystery he directed but never quite controlled.

An hour before, nothing was out of the ordinary. Then, when he’d gone back to the empty office for a while, sunk a couple of glasses of grappa, trying to make the night go more quickly, Bella had called, demanding he examine the fiery beast before his time. She had given no reason, only vague forebodings. And she wasn’t there either, once he’d splashed his face in the office washroom, gargled some water around his mouth to disguise the stink of alcohol. He’d found one of the double doors ajar, walked in, closed it behind him and met nothing. The island seemed empty, dead. There was only one other worker around, Piero, the lowly
garzone
, who had turned up unexpectedly on his night off and was now shifting wood and ash from his boat outside.

He shook his head, wishing the effects of the drink would disappear. The furnace was always difficult. The archaic use of both wood and gas, part of the Arcangeli’s secret process, made sure of that. But nothing now made sense. As he watched, the grunting, groaning monster roared again beneath the shifting bulk of the fenestrated roof, then exhaled in concert with the wind.

One — or both — seemed to whisper his name, taunting him. His father had called Uriel that for a reason. The Arcangeli were always different even when, before his time, they were just a bunch of bourgeois boatbuilders maintaining the last worthwhile
squero
in Chioggia. Growing up as a child in Murano, he was aware of the distance, always. You never met a Bracci or a Bullo who had to bear such a burden. They’d have been teased, without mercy, every single day in the plain, hard school by the church. Uriel Arcangelo was never mocked. Never befriended either, not even when he took one of them for a wife.

Maybe, the grappa said, laughing at the back of his brain, they knew what the name meant.

Fire of God. Angel of terror.

It was just another of his father’s cruel little jokes, to make every one of his four children an angel twice over, each with their set role. Michele to succeed him as
capo
. Gabriele to be the strong man by the furnace, the maestro with the pipe, seeing that the clan prospered. Or not. Raffaella to intercede when matters went too far, to bring a woman’s sense to their deliberations, to heal. And Uriel. The hardest, the loneliest of vocations. Uriel the magician, the alchemist, the family’s
omo de note
, the Venetian’s whispered, almost fearful name for a man of the night, keeper of the secrets, which had been passed on from the small black book that used to live in Angelo’s jacket pocket, kept from the curious gaze of outsiders.

Uriel closed his eyes, felt the heat of the furnace scorch his skin, recalling those last days, with Angelo fading towards death in the master bedroom of the mansion next to the damned palazzo, the money pit that had consumed them over the years. The image of that final night would never leave him. How the old man had ordered the rest of them out, made him, little more than a boy just out of his teens, read the notebook, study its ancient recipes, commit those secrets to memory. Uriel had obeyed, as always. So well that Angelo Arcangelo had called a servant and burned the book in front of his eyes, just ash and flames fed by lighter fuel in an ancient pisspot, as his father laughed, not kindly either, for this was a test. The Arcangeli would be tested, always.

By midnight, his family at his side, Angelo Arcangelo was dead, a pale, stiff cadaver on the white sheets of the antique four-poster where each of them had been conceived. In Uriel’s head the scene was as real, as cruelly vivid now, thirty years after, as it was that night. And the codes lay secure in his head still. Living, shifting potions of arsenic and lead, antimony and feldspar, each betokening a shape or a colour that would form within the substance of the raw crude
fritta
growing in the belly of the furnace, then metamorphose into something beautiful when the next magician, Gabriele the maestro, with his steely arms, his bellows for lungs, his pincers and his pipe, worked the sinuous, writhing form in the morning. This was how the Arcangeli tried to put food on the table, not by building
bragozzi
barques for Chioggia fishing clans. Magic made the Arcangeli money, kept them alive. But magic was a harsh and temperamental mistress, demanding, sometimes reluctant to perform. Now more than ever.

Angelo had passed on his secrets with a cunning, certain deliberation. The memory of his father’s face in those last moments — skull-like, grinning, knowing — stayed with Uriel always, taunting, awaiting the time when Angelo’s son would fail, as every
omo de note
did because theirs was an imprecise art, one which could be destroyed by an extra milligram of soda or a slight shift in the searing 1400-degree heat of flaming wood and gas. Even so, Uriel had memorised the formulae, repeating them constantly, burning them into his synapses, swearing that a day would come when he would find the courage to defeat the demon of his father’s last admonition:
Never write these down, or the foreigners will steal from you
. He was still waiting. Just the thought now, long after his father had turned to dust, made him sweat all the more heavily beneath the heavy tan furnace apron he wore over an old, tattered cotton suit.

That time
would
come. Until it did, the litany of recipes would race through his brain unbidden, unwanted, when he woke up, head throbbing from drink, in the blazing light of their apartment in the mansion. On those rare occasions he wrestled with Bella on the old, creaky brass bed, trying to find some other kind of secret in his wife’s hot, taut body, wondering why this was now the only way they could converse.

“Bella,” he murmured to himself, and was shocked how aged and dry his own voice sounded. Uriel Arcangelo was forty-seven. A lifetime of working nights in the furnace, the cursed, beloved furnace, feeling the fire break the veins of his hardening cheeks, gave him the complexion and the dull, depressed outlook of an old man.