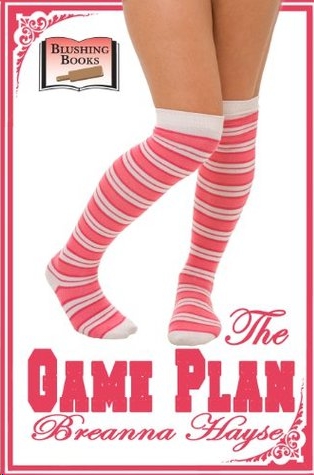 All rights reserved.  No part of the book may be reproduced or transmitted in any form or by any means, electronic or mechanical, including photocopying, recording, or by any information storage and retrieval system, without permission in writing from the publisher.

The trademark Blushing Book
s®
is registered in the US Patent and Trademark Office.

Blushing Publications thanks you whole-heartedly for your purchase with us!

There are plenty more stories such as the one yo
u’
ve purchased from Blushing Books!  Visit our online store to view our might selection!

“
I hate these guys! I wish I never moved in with this family!" Cassie fumed, sitting cross-legged on her bed with her chin on her hands.  How dare Rob talk to her like that?!  Who the hell did he think he was anyway?!

She heard a heated argument downstairs between two of her roommates, who where also brother
s–
Rob, the oldest (and most serious) at 33 and Glenn (the funniest and most relaxed), who was the youngest at 21.  She could
n’
t quite make out what was being said, but she knew that she was the topic of the debate.  Bryon, the middle brother at 32 (and always the voice of reason), was still at work as assistant coach of the football team at the local university which Cassie attended.

She had skipped class and someone had ratted her out to Bryon, who had called Rob.  She suspected it was Judy, her arch nemesis.  That girl had a serious crush on Glenn and would do anything to earn his attention.  The bitch.  Glenn was Cassi
e’
s closest male friend and was very close to her and Judy did everything she could to cause them friction.

Cassie flopped onto her back, staring at the ceiling.  She had been ordered by Rob to march her fanny upstairs to wait until his dad, Bill, came home from work as a celebrity sports commentator and national spokesman for th
e‘
Staying In Schoo
l’
campaign.  After throwing a screaming fit and telling Rob exactly what she thought of him, the 20 year old girl had stomped upstairs and slammed the door with a satisfactory bang, hard enough to make some pictures fall off the hallway wall.

Cassie fought back angry tears.  This was the first time Rob had really raised his voice to her in such an imposing manner.  Most of the time, he just grumped and stared her down until she caved.  There was something behind his stare that made her uncomfortable.  Bryon called it hi
s‘
game fac
e’
; it was the look he would give his opponents to make them question their sanity for being on the field with the large, powerful young man.

In general, the brothers tended to tiptoe around her because of her explosive temper, especially after her mother had passed away unexpectedly one year ago and she opted to stay with them in lieu of being alone.  She had known her neighbors since she was eight, staying at their home more often than her own.  Bill was the only decent male role model she had.  They had met when Cassie was eight and she and her mother had moved next door.  Bill, a widower, quickly stepped in to help the two girls and brought with him three large, strapping, well-mannered boys.  The family had been good to her and her mom, and they had eagerly embraced them both with love and affection.  Bill had been there through thick and thin, simply out out the goodness of his heart, and had tried to provide her with some direction per her mother's request. Cassie had to admit he
had
been good her, but she never saw him as an authority figure.  In truth, like her mother, he had let her get away with murder.  Rob, thoug
h
…

He frightened her, he always had, and she did
n’
t know why.

Snarling, Cassie threw a pillow at the door.  Why should she listen to Rob anyway?  It was
n’
t his body that made her tremble, but his face.  She was used to the boy
s’
heights and physiques; each had played football all through high school and most of college as sons of the famous Big Bill Johnson, star quarterback for the Dolphins.  Both Rob and Bryon were huge, like their father, who was well over
6’4”
.  They had broad shoulders and slender waists, muscular arms and legs, beautiful dimpled smiles, honey brown eyes, and dark brown hair.  Glenn was a kicker; he was shorter, long-limbed, slender, and had lighter hair that seemed to match his playful, boyish disposition.

It was tha
t‘
game fac
e’
that changed Ro
b’
s normally warm, gentle gaze to hard, full-blown menace when he was challenged so directly.  It clearly spelled trouble.

Cassie sighed, trying to calm her anger.  Truthfully, she wanted for nothing.  Since her mother's passing, Bill provided for everything and she did
n’
t have to worry about a roof over her head, food on the table, or clothes on her back.  But she could only view her life in one way; she lived in a gilded cage with pain in the ass roomates who loved to try to control her.  Except for Glen
n…
he understood her.

Footsteps on the stairs alerted her to Bil
l’
s homecoming.  He tapped on her door before peeking in.

“
Cass?  I
t’
s me.  We need to talk
,”
the big man said gently, walking in and quietly closing the door behind him.  Cassie snarled.

“
There is nothing to say, Bill.  Rob already screamed at me
.
”

“
I heard.  And I would
n’
t say he screamed.  What happened, kid
?”
he said as he sat down on the bed to look at her.  She fought the sense of guilt.  He really treated her well, and was very kind, so why did she like to make him so miserable?  She shrugged.

He pulled out a piece of paper.
“
Bry says that you are failing history and this was your chance to bring your grade up
.
”

“
Bry should mind his own damn business.  No one else in that stupid school has their roomate pulling their records to check up on them.  What do I need history for, anyway?  I
t’
s the past and i
t’
s done and over with.
I’
m a culinary major
,”
Cassie argued.  Bill sighed, putting the paper down.

“
Cass...  I know yo
u’
re going through a lot.  I miss your mom too; we all do.  She was a great surrogate mother to the boys and a wonderful, loving, and tender friend to me.  Sh
e’
d want you to go forward and be happy.  You need to realize that the boys and I are here to help you, to be part of your life.  We love you
.
”

“
Then tell them to stop butting into my business and leave me alone
.
”

“
Someone has got to keep an eye on you, Cassandra.  Every time I turn around you are giving me reason to get on your case.  Obviously, I have
n’
t been making my point.  We need a new game plan
,”
he said patiently.
“I’
m afraid
I’
m going to have to take your car keys this time, hon
.
”

He held out his hand, shaking his head.
“
You blew it.  You are also grounded until your grades come up
.
”

“
Shhh, no yelling.  My house, my rules.
I’
ll tell you the same thing I told my boys.  You are an adult and are more than welcome to find your own place and take care of your own needs.  But if you choose to stay here and have me provide for you, then there are rules you need to follow.  The first is your education.  Tha
t’
s very important for your future
,”
he said calmly, staring into her green eyes.
“
Baby,
I’
ve tried to be like a dad to you.  I really have.  You need to tell me where
I’
m going wrong.  I never had this problem with any of my sons
.
”

Maybe because you did
n’
t desert them like my own father did to me and mom,
Cassie thought.  She said nothing, just pouted.  No one knew how she felt, but the fear of rejection, even from these men, had never left her.  She harbored a belief that it was only a matter of time before they hung her out to dry.  Her fear and insecurities had erupted in full force after her mom died.  She feared that these men had loved her mom but merely tolerated her because they had to.  Now there was no good reason to keep her around.

“
Very well.  When you think of something, I would appreciate knowing.  I also have some important news for you.
I’
m going to Japan to shoot those commercials then doing a speaking engagement in Europe.  Rob will be staying here at the house to help
.
”

“
NO!
!”
Cassie barked.  It was bad enough he hung out here so much, but to move back in, even
temporaril
y
…

Bill raised his hand in the air.
“
Yes.  Like I said, new game plan.  You need someone more responsible than Glenn to keep an eye on you and Bry is out too often with his team.  Ro
b’
s doing us a big favor, so please do
n’
t give him a hard time
.
”

“
Quite the contrary, he loves you very much.  I told you, we all do.  You just make it really hard for them to show it.  Yo
u’
re too young to have such a hard wall up.  Give these guys a chance, please
?
”

“
How long will you be gone
?”
she sounded defeated.

“
Three months.
I’
ll be back in early January.  Think yo
u’
ll survive
?”
he asked with a twinkle in his eyes.

“I’
m sure the
y’
ll do fine.  Try cooking for them for once; yo
u’
d be amazed how compliant they are with good food in their bellies.  Your keys, please
.
”

Growling, she slapped the key ring into his hand.  He kissed her forehead and left the room.  Cassie watched him go, his limp evident as he walked away.

“
Just because you took the keys does
n’
t mean I wo
n’
t drive
,”
she muttered under her breath, knowing exactly where the spare set was hidden.

Glenn looked up at his father as he came down the stairs.

“
I’
m fine, just aching.  Weathe
r’
s cooling down and the old injury whines about it
.
”

The handsome older man smiled, running his hand over his youngest so
n’
s head.
“
Yo
u’
re going to mind Rob, right
?
”

“
When h
e’
s not being a jerk, sure
.”
Glenn grinned, kicking his older brother in the thigh.

Rob smacked Glen
n’
s foot.
“
Cut the crap.  What are the instructions regarding HER
?”
Rob asked, nodding towards the stairs.

“
Use your judgment.  I took her keys and sh
e’
s grounded until the grades come up.
I’
m sorry to leave you in this predicament, but I really appreciate you being willing to help
.
”

“
Ah, I know that look.  You changed your game plan.  Pop, have
n’
t you realized that she does
n’
t follow the rules of the sport
?
”