Read The Chosen - Stone Dance of the Chameleon 01 Online

The Chosen - Stone Dance of the Chameleon 01 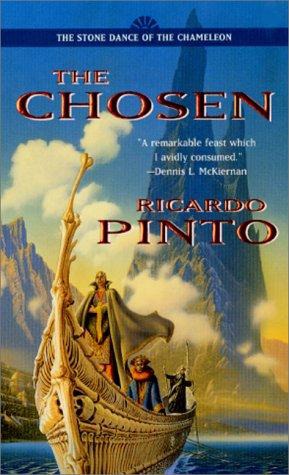 SUMMARY:
Young Carnelian has spent his entire life alone with his father, who years ago rejected the savage cruelty of the Masters of Osrakum and was sent into exile. But now a ship has come flying through the winter gales to shatter his quiet world. Three Masters disembark, and as they remove their masks of gold, Carnelian is awed by the light that seems to radiate from their skin. In formal conclave they beg Carnelian's father to return with them to Osrakum to oversee the election of a new God Emperor.And so Carnelian begins to fulfill his destiny. Along his perilous journey to the Osrakum, he is forced to learn bitter lessons in bloodshed, power, intrigue, love, and treachery--and sets in motion the concluding events in a story four thousand years old.

BOOK ONE
of
THE STONE DANCE OF THE CHAMELEON Trilogy

Originally published in Great Britain by Bantam Press, a division of Transworld Publishers

All of the characters in this book are fictitious, and any resemblance to actual persons, alive or dead, is purely coincidental.

The right of Ricardo Pinto to be identified as the author of this work has been asserted in accordance with sections 77 and 78 of the Copyright, Designs and Patents Act 1988

Condition of Sale
This book is sold subject to the condition that it shall not, by way of trade or otherwise, be lent, re-sold, hired out or otherwise circulated in any form of binding or cover other than that in which it is published and without a similar condition including this condition being imposed on the subsequent purchaser.

Papers used by Transworld Publishers are natural, recyclable products made from wood grown in sustainable forests. The manufacturing processes conform to the environmental regulations of the country of origin.

Praise for
The Chosen:

'If fantasy is to thrive, it needs fresh, original voices- Ricardo Pinto's first novel is...a fantasy novel without prophecies, spells or evil enchanters. There are no battles, no thick forests, no magical rings or swords. This is no nostalgic vision of pre-industrial Europe; instead we have a highly structured and cruel society which appears to have its roots in Chinese, Indian and Polynesian cultures, but cannot be seen as a simple reflection of any real historical period...Pinto is particularly good at describing his imaginary world, a world of unusual complexity ...This is a boldly conceived and intelligently written fantasy which lingers in the memory like a strange and disturbing dream'
Interzone

'Ricardo Pinto is the Alan Hollinghurst of fantasy fiction.
The Chosen
is the outstanding de
but of a new kind of writing within a well-established genre. Pinto is blazing a trail where others, no doubt, will follow'
Amanda Foreman

'Pinto writes with an almost Donaldsonian/Feistian grip on language, content and description. There is no question that he will find a dedicated readership'
Anne McCaffrey

'An incredibly well-written book, literary fantasy of the highest order. The characters, locations and situations he describes are amongst the most vividly realised that I have come across... Pinto manages to combine Michael Moorcock's eldritch surrealism with Gene Wolfs arcane mysticism in a tale of great atmospheric elegance and charm...With such depth of detail, history and narrative, this is a series that will surely develop into one of the finest flowerings of the genre. In an age in which fantasy is derided by many for its 'yet another Tolkien' image, it's really good to find a novel, and
a writer, that's not afraid to
smash through the genre's literary boundaries in true style'

'Ricardo Pinto's
The Chosen
strikes the reader with great force. His extraordinarily salient story has the quality of a lucid dream. I am impressed by the archetypal strength of his writing - the continual tension of opposites, the keen eye for naturalistic detail... It is a pleasure to watch Pinto celebrate the evanescence of life and the enduring truth of love with such elan. I envy the visceral power of this book that dares to specul
ate so inventively, so colourfull
y, so humanely about our mortal limits'
AA Attanasio

Towering, moving with all the grace and elegance of the Chosen themselves, Ricardo Pinto's splendid tale draws us into a fantasy world rich in detail and passion and drama; it is a remarkable feast which I avidly consumed'
Dennis L McKiernan

'Ricardo Pinto takes his hero on a vast journey through a brilliantly imagined land...Part of Pinto's appeal lies in the meticulous research he puts in - virtually to the point of obsession - to create a believable world'
The list

For my mother and father

A number of experts have provided me with invaluable support in the writing of
The Chosen.
In many meetings, Ben Harte helped reshape the geology of Osrakum and the Three Lands. David Adger helped me invent the language Quya and it is his translations that appear in the book and that have allowed me to form grammatically correct glyphs. Dominic Prior checked my maths and produced much of his own. He was instrumental in devising the watch-tower heliographs and gave me the equations to calculate the lengths and directions of shadows. Frank Neuman helped me devise a plausible monsoon. Nina Mandel delved in Hebrew scriptures to find, among other things, the orders of the angelic host. Billy, a tattoo artist in Leith, Edinburgh bemusedly answered a question or two. Jane of the Edinburgh Zoo found out for me the colour of a flamingo's tongue. Any errors are my own.

All my friends and family are to be pitied the years that they have put up with me working on this book. However, it is my partner Robbie who has most patiently overseen this monstrous labour. He kept me from starving and has had besides to read the thing too many times. My brother David justly found early versions complete rubbish and told me so. A few friends read drafts and gave me valuable criticism and support: Jo Bateson, Bridget and Peter McCalister, Rosie and Tom Hall. For years, my Tai Chi buddies Bob Gillies, Ian Thompson and Graham

Gibson have had to endure ranting in the pub about this book. Exchanging madnesses with James "Moonie" Worrall helped keep me sane. Liz and Stanley Rosenthal brought me to the attention of my agents. Others, Fred White, Philip and Simon Bolton, Mike Forrester, Steve Rizza, James Hutchby, Ali Pickard, Sue Macarthy and John Scofield, Richard Jordan, Grace Cheetham, Anoop Pareikh and Apple computers have all made significant contributions.

I wish to thank Broo Doherty for her incisive editing and unflagging support, Claire Ward and the other people at Transworld for all their enthusiasm and hard work, Jim Burns for his cover and Neil Gower for his interpretation of my glyphs and maps, as well as Nancy Webber and Antonia Reeve. Finally there is my agent Victoria Hobbs (masterfully abetted by Alexandra Pringle) for whose belief in me, encouragement, patience and indefatigable championing of my cause I am deeply grateful.

The Sky Lord come to thunder

Till He shall pierce You with His shafts

Rill and pool Your dusts

Till Your flesh swells up

In the midst of breaking waters

Thrust forth the Green Child

Squeeze Him into the air

At Your breasts That

And once more blow

His scents Beneath the skies.

Part of the 'Song to the Earth' from the Book
of
the Sorcerers
translated
into English.

There, trees turn to gold then die

As does all that is born of the sun.

All that day the wind had rattled the shutters and slanted the sky with snow, but in the warm heart of the Hold Carnelian sat with some of his people around a fire, listening to their talk. They were telling stories, the stories that those who could still remember told of their lives before the child
-
gatherers came for them. The words bleached his mind with the light of summers far away. He settled back into the chair dreaming, his eyes narrowed against the leaping dazzle of the flames. The tale rumbled on amid the whisper of women weaving, the remote clink and clatter of the kitchens, someone humming a song. Behind all this was the keening wind which made him shiver, then sink deeper into the comfort of the chair.

A child's voice cried out, muffled, outside somewhere. The spell broke. Reddened faces turned from the fire. They looked down the hall,
between the pillars. The great
door opened and a girl slipped in. A gust of snow-spotted air lifted some of the tapestries. Carnelian rose with the others and drew his blanket round him.

The girl ran towards them, all eyes, breathless. 'A boat.' Her lips shaped the word with exaggerated care. She made sure she saw the disbelief on every face. She grinned, delighted to be the centre of all their staring.

Carnelian gave his blanket to someone, strode away to pick up his cloak, threw it on, came back to the girl and offered his hand. 'Come, show me.'

The girl reached up for it, sinking her chin into her chest, blushing. Her own fingers were very small and dark in Carnelian's milk-white hand. Together, they led a procession out from the hall. The cold hit them. Carnelian sent the old people back into the warmth. There's no need for you to come. I'll send word back if it's true.'

Then he was letting the girl pull him off across the slushy courtyard. Some youngsters followed. They all huddled together against the wind but it slipped between them, ballooning up their blankets, ruffling the feathers on Carnelian's cloak.

They had to cross two courtyards to reach the halls that looked east across the sea. Pavilions, slender-columned, in summer cooled with tiles and water. Now they were abandoned to the frost, but then they caught the breezes and were filled with sun and laughter.

Their ear tips were burning when they reached the door to the tower. A stairway lay beyond down which the wind came screaming. They fought their way against it up the steps treacherous with ice. Slits let in spear-thrusts from the storm. They reached the top, girded themselves and staggered out into a raging roar.

Unveiling the Bridesmaid by Jessica Gilmore
Destiny Calling by Maureen L. Bonatch
Sleeping With the Wolf by Maddy Barone
Premeditated by Mcquein, Josin L.
The Encounter by Norman Fitts
The Apocalypse Watch by Robert Ludlum
The Sigh of Haruhi Suzumiya by Nagaru Tanigawa
Public Burning by Robert Coover
Leaving Earth by Loribelle Hunt
August (The Year of The Change Book 2) by Kathryn Gilmore