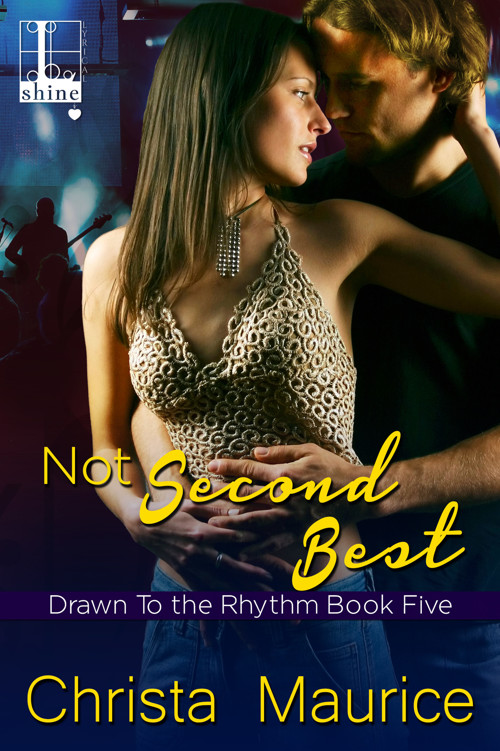 As a lawyer at Touchstone management, Tessa’s position brings her up close and personal to some of the world’s biggest heartthrobs. Sometimes that intimacy crosses professional lines, which is understandable considering Tessa’s impressive contact list. But when rock star Brian Ellis set her aside for the girl of his dreams, Tessa can’t help wonder if “spinster aunt” is her true vocation. Which explains her hook-up with rising star Brett Cherney at Brian’s celebrity wedding . . .

As the lead singer of BroRide, Brett has lived the rock-n-roll bad-boy lifestyle to the very hilt. But when the girl of his dreams marries fellow rocker Brian Ellis, he buries his disappointment in the arms of an older woman. The following morning, Brett realizes what he experienced was only the beginning of a song he’s been trying to write all his life. It’s a seductive theme, which Tessa falls for again and again, but getting her to believe they have a hit is turning out to be far from a sure thing . . .

Drawn to the Rhythm Series

Let Me Be the One

One Ring to Rule

A Drawn to the Rhythm Novel

Lyrical Press books are published by

All Kensington titles, imprints, and distributed lines are available at special quantity discounts for bulk purchases for sales promotion, premiums, fund- raising, and educational or institutional use.

To the extent that the image or images on the cover of this book depict a person or persons, such person or persons are merely models, and are not intended to portray any character or characters featured in the book.

Special book excerpts or customized printings can also be created to fit specific needs. For details, write or phone the office of the Kensington Special Sales Manager:

Lyrical Press and the L logo are trademarks of Kensington Publishing Corp.

Tessa walked outside, maintaining her happy expression past the knot of smokers by the door. This wedding shouldn’t bug her so much. Brian had gotten over his crush on her years ago. Shit, he’d been married before. She’d fallen off his pedestal a long time ago. So why did this marriage seem like the end of the world?

Suzi made a beautiful bride. One of her friends had designed the simple white gown for her. Ribbons of rainbow colors started as faint pastels across the bust and gained intensity as they wrapped around her body and down the back of her dress until they formed a brilliant train. Daisies wound through her upswept hair and complemented her pretty, sweet face. Brian looked rather sharp, too, in his white tux, open at the throat. His best accessory, though, had to be the expression of utter joy in his eyes.

“She’s the Holy Grail,” Brett said. He leaned on the guardrail, fiddling a cigarette between his fingers. “She was a total mess when she left Logan last year. I took her out to this place I go to. Never laid a hand on her.”

Tessa nodded. Why did he think she should care? Everybody knew he’d pulled Suzi out of the party where she’d broken up with her last boyfriend, Logan, nearly a year ago. Tessa had been one of many people trying to figure out where the hell they’d gone for weeks before Suzi had reappeared at Jason’s West Virginia place. “You’re a big damn hero.”

“Something like that.” He flicked the cigarette off the cliff, unlit. “Brian’s a good guy, right? He’ll be good to her, won’t he?”

“I’ve known him since he was a kid. He’d walk through hell for her.” Brian was the best guy. Absolute heart of gold. If she’d been half awake ten years ago, she could have had that.

“Good. That’s good. Cause next time I have to haul her away from some asshole, I’m not going to be so easygoing about letting her leave.”

“What the fuck are you talking about?” She glared at Brett, but he looked like he’d been dragged backward through the desert by a tour bus, and she faltered. “What’s wrong with you?”

Brett turned, stared at the ocean. “Probably the same thing that’s wrong with you.”

“What’s that supposed to mean?”

“Oh, come on. How dumb do you think everybody is? You’ve known Brian since he was in elementary school. His daughter is named after you. The only person at this wedding who looks sicker about it is Logan.” Brett bobbed his head. “And maybe me. You and Brian had a thing, or you wish you had a thing, or something. I’d say I could write a great song about it, but there’s already been a bunch. Etta James did three or four.”

“So, are you telling me that party-hearty Brett Cherney lost his poor little heart to the bride?” Tessa meant to smirk, but it came out twisted because of the sob she was trying to cover.

“Only as much as tough lawyer Tessa Callisto lost her heart to the groom.”

Tessa stared back in the direction of the pavilion. Over six hundred guests. This wedding was almost as well attended as the Grammys. No point hiring a band because no local band could hold a candle to this audience, so music had been supplied by a running jam. Everyone was having a blast. They wouldn’t notice a couple of people missing. “You know what the best cure for a broken heart is, don’t you?”

“What?” He glanced over his shoulder as if the answer to her question was back at the wedding reception.

She stared into Brett’s eyes. Brett, who slept with every female who caught his fancy. And there were lots of those. What with his lean build and washboard abs, he was such a very good-looking specimen. “Wanna?” She arched an eyebrow at him.

His lips curled into a smile. “Sounds good to me.”

“Your place or mine?”

Brett slammed her against the door as soon as it was closed. All the way here, she’d been teasing him. Running her hand up the inside of his thigh, dragging her fingers through his hair, toying with his earlobe. And every time he’d reached for her, she’d smacked his hand away and told him to watch the road.

“Your ass is mine now,” he growled, pressing his face into the curve of her neck.

“I was hoping you wanted more than that.”

“Believe me. I plan to have every inch of you before I’m done.”

Laughing, she ripped his shirt open and shoved it down his arms. “Let’s see if you can deliver on that promise.”

“I can.” He hiked up her skirt. “Pantyhose? Really? These fucking things are like a force field around your sweet spot.”

“I was going to the wedding of an old and dear friend, not headed out for a sleazy tryst.”

“Damn.” Brett dropped to his knees and pulled at the pantyhose. Her heavy, lusty scent crawled through his brain and straight into his dick. “I didn’t think women wore these things anymore.”

“I’m not the kind of woman you usually undress.”

“No kidding.” He smoothed his hands down her soft thighs, down to— “Your fucking shoes have buckles on the ankles. Is there a lock on your pussy, too?”

She laughed again. He glanced up in time to see her toss her blouse across the room. Underneath, she’d worn a lacy bra. Hopefully, it had a normal clasp and not some exotic thing like her goddamn shoes. He fumbled with the buckle, but his fingers couldn’t grasp it.

“Let me help you.” She crouched, pinned between the door and him, trying to reach her shoes through the tangle of pantyhose. Her dark hair brushed his cheek, and he shivered. Tessa was hot. Way hotter than he’d ever thought.

“Screw that.” Brett wrapped his arm around her waist and swung her onto the floor. “I can get to all the parts I need.”

She buried her hands in his hair, drawing him into a deep kiss. Her tongue delved into his mouth as she ground her hips against his.

The urgent need in her touch sizzled along his skin. “You’re a hell of a woman,” he said, dragging his lips down her chest to the thankfully simple front clasp on her bra.

“You on a schedule?” He flicked open the bra and curved his hand around the warm flesh of her breast.

“I love a take-charge woman.” Reaching into his pocket, he located a condom.

“Then you are going to love me.” She grabbed his pants and opened them. “You have a rubber? If not, I have some in my purse.”

“I got it.” He climbed to his knees and ripped open the foil. “Glad to know you have some, too. Wouldn’t want to run out.”

“I’m pretty sure the desk would send up more if we asked. I’m surprised they didn’t give you a gift basket of them when we checked in.” She stretched her arms over her head, which did delightful things to her shape.

“I don’t bring women here.” Brett lifted her nylon-bound ankles over his head and crawled between her legs.

“Except me.” Tessa licked her lips. “And Suzi.”

Her and Suzi. Brett closed his eyes as he thrust into her, trying to imagine Suzi under him and only feeling Tessa’s hot, sleek body and wet, soft mouth. He wrapped his arms around her, riding her hard and fast, lost in the wild rhythm of their bodies sliding together. Her legs clenched around his hips as if she’d never let him go. Beneath him, her eyes were closed and her mouth open as she gasped. Her dusky skin was slick with sweat.

His control slipped, and he groaned. “I don’t think I can wait.”

“You’ll make it up to me.” She tightened her hold on him, arching her hips to meet his.

He came in a heated satin rush, his whole body aching in the crest. Throughout, he could feel her arms and legs around him. Cradling him. For once, he didn’t feel like he was in free fall. Funny, but he didn’t hate the sensation the way he’d always thought he would. It was safety. Security. It was… “Tessa,” he murmured.

“Just finish the job.” She dug her fingernails into his back.

He thrust against her again until she came apart in his arms.

Sighing, she let her head loll on the carpet. “That was distracting.”

“No problem.” Brett swallowed his disappointment. Distracting? He’d never been called that before. The women he’d had lately had been a little more impressed. Fame was very impressive to a groupie. But Tessa was no groupie. She’d been in the thick of fame when he was still singing in the school holiday pageant. “Glad I could be of help.”