Koban: The Mark of Koban 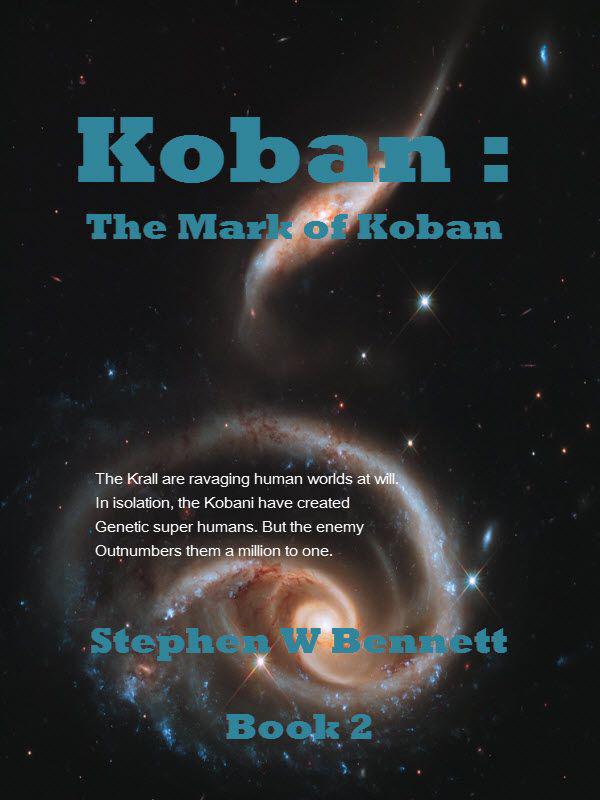 The Mark of Koban

To Rob,
first for his friendship, then for invaluable tips, suggestions, and advice.
Proofreading what “fat fingers” produce, in copious amounts, is much harder
than simply reading. Thank you.

To Anita,
for unwavering support and encouragement, and endless patience when she calls
me for dinner, and I say (falsely), “I’ll be right down.” Then type another two
pages. I couldn’t do it without you Babe.

To my
sons and daughters-in-laws, to the gaggles of grandchildren, thanks for all of your
complements and praise (biased, or fairly earned, I don’t care).  I love you all,
and thank my young Kobani TGs for protecting me from Krall and rhinolo.

3. Slaughter
on the Nook

19. The OK
Corral with Knives

It was a quiet shift for Carl Grayson in the planetary
traffic control unit; he wasn’t even wearing an earpiece this late at night,
using speakers due to the low traffic volume. Three ground-to-orbit ingot
transports from Standard Smelters were all that had been in orbit for the last two
hours. Galactic Mining and Rim Land had finished their orbital ingot deliveries
for the day.

Yesterday had been busier, when there were three Jump ship
freighters in orbit, with a dozen ingot transports up gathering the parked
ingot containers, produced by over a dozen mining companies. After the three blocky
looking freighters had finished loading containers, they separately broke orbit
and Jumped back to the Hub area.

Today, the two-month task of refilling the assigned parking
orbits for the various mining companies had resumed.

It didn’t stay quiet. Not very quiet at all.

“Mr. Grayson,” his shift supervisor replied in mock severity,
“that’s hardly unusual is it? You would know we have an arrival scheduled today
if you had bothered to read the pre duty list.”

“But it’s
four
bursts at once Mam and they’re all
about five hundred miles out. I’ve never seen any ship pop out that close, have
you? And four at the same time?”

She stood up and walked towards his display. “There must be some
sort of software glitch, Carl. We only have two Jump arrivals in the next three
days, and they never White Out close to the planet.”

“Mam, the computer shows four
separate
gamma bursts,”
he insisted, “with no more than ten seconds between the first and the last.
They’re clustered within thirty miles of each other too, over the northern pole.”

Lady Alice Lambeau could see the large traffic monitor
display clearly now, and it did show what Grayson described. However there
wasn’t a single chance out of near infinity that there could be four random Jump
ship arrivals that close to a planet. Not clustered that tight and all popping nearly
simultaneously. Typically, a ship was lucky if a White Out occurred within an
Astronomical Unit of the target star, let alone practically in orbit at the
destination planet.

“They aren’t sending their ID or registry either,” She noted
another irregularity.

“Whoops,” she let slip her surprise as the display tagged additional
White Outs. “There’s another four. Over the
south
pole?” Confusion was
evident in her voice and perplexed expression.

The second cluster of gamma ray bursts had also originated
from a small patch of sky, roughly five hundred miles from the planet.

“Mr. Grayson, call those eight ships and find out who they
are, where they came from, and what they need. I’ll be at my console calling
the CEO offices of the big three, to see which one of them forgot to tell us
something. This is a sloppy way to run a business,” and she turned away.

She meant the largest three mining ventures on Gribbles’
Nook, Galactic, Standard, and Rim Land, which if combined, accounted for nearly
two thirds of all of Nook’s shipping traffic.

“Lady Lambeau,” Grayson spoke in excitement. “You aren’t
going to believe this! Another eight White Outs, two sets of four, opposite
sides of the planet, same distance away. These are equatorial, outside the
parking orbits.”

“I said to call them on the radio Carl,” she answered in exasperation.
“I’m waking up some CEO’s to find out what the hell they have going on.” It was
actually late night only for two of the largest three company offices, but Carl
knew what she meant.

As she lifted the com set, she heard Grayson again, shouting
this time. “Damn! One of Standard’s transports just exploded. He must have hit
an ingot in the wrong orbit.” A loud emergency transponder alert sounded
briefly, before Carl acknowledged it on his console.

The disaster triggered radio calls from the other two Standard
owned spacecraft. Standard16 made a call to Standard21, the transport that had
exploded, trying to contact the escape pod. The other transport was calling
traffic control.

Grayson focused on the call made to him, but the two
simultaneous transmissions on the same frequency had “stepped” on one another,
and the old Artificial Intelligence computer system they had couldn’t sort them
out.

The pilot’s reply was insistent. “This is 23; I’m telling
you one of the new arrivals blew 21 out of the sky! My radar happened to be active
in 21’s direction, watching for stray ingots in the wrong orbit before I moved
in to park mine. The missile track was obvious.”

Partly overhearing, Lambeau changed her mind about the call
to the CEO’s, and instead  called downstairs to the Capitol City spaceport
manager’s office, to get a rescue ship aloft. There really didn’t appear to be
much hope for a survivor from Standard21’s small pieces of debris. There was
only one pilot per ingot transport, and the cockpit ejection system
was
the
escape pod. Her mind failed to register the reference to a missile.

She was speaking with the operations manager when she heard another
panicky sounding transmission from Standard23. She paid closer attention this
time. “I’ve been fired on. I dropped ingots and I’m braking hard to fall out of
orbit. The missile is turning to f…” The transmission cut off in the middle.

A few seconds later Carl murmured, “He’s gone.” He watched
as another cloud of debris spread on his radar display.

Immediately keying his mike, Grayson made an urgent call,
“Standard16, this is Capitol Control. Drop your ingots immediately and break
out of orbit, I say again, get out of orbit immediately. Your two company ships
were fired on by the new arrivals.”

He had his mental fingers crossed that 16 would make it down
fast enough. They hadn’t acknowledged his call before a third debris field
blossomed.

Lambeau was now on the line with Capitol Rescue downstairs, but
advised them to stay on the ground, explaining what had happened.

“No, we don’t know who they are,” she responded to a
question. “Of course I’d call them hostile. They fired without warning on three
of Standard’s ingot haulers.” Another question. “No. It’s too late, they’re
gone. Notify the spaceport police, and I’ll contact the police forces of the other
cities from here.”

“Mr. Grayson, we do have
armed
police you know. There
are only sixteen ships. We have eighty five million people down here, and some extremely
hardnosed miners. They should be able to help the police keep those rogue crews
in line, if they even dare to land after what they just did.”

Grayson had extreme doubts. These were not “rogues,” they
had killed three men and destroyed the property of a powerful mining company on
this world. That act didn’t seem to faze them at all. They had not answered his
transmissions to them either.

Besides, the police here were lightly armed. Aside from bar fights,
the most common crime was social. A large number of women on this crude planet were
notorious for taking advantage of drunken men, illegally obtaining their sperm
without contracts, or payments to them or to their mothers, using the oldest fashion
method there was.

Except for knives and clubs, there were no serious weapons
available to employees (they were
not
citizens), on the entire planet. Police
officers carried batons, non-lethal Jazzers or Sonics, and sometimes tasers.
The latter occasionally caused fatal heart stoppages, so police wouldn’t use
tasers on Hub worlds, considering them too risky. On the Nook, a handful of SWAT
teams had rifles and laser pistols in armories, but not very many of those. The
well-paid employees didn’t riot often, not when their bosses owned everything
but the workers nice bank accounts, which were subject to garnishment.

Modern society out on the Rim was more peaceful, cordial,
and polite than it had been three hundred years ago, even on Hub worlds. Back
when men had allowed much cruder standards for acceptable behavior. This was a
gentler time. It was about to end painfully.

Lambeau told her older model AI to notify the various police
departments of what had happened, and ordered the same alert sent to the CEO’s
of every mining company. Once she had protected her backside by the necessary company
notifications, she also informed the “Mayors” and “City Managers” of the company
owned towns and cities.

Mayors and Managers on Nook were not politicians. Instead, whichever
company had established and built the mining town appointed them. Usually a female
CEO would select a woman for City Manager or Mayor, and they were on the
controlling company’s payroll.

The problems caused by lack of a unified planetary
government was about to be experienced through massive confusion and chaos, as
the first ever planet wide emergency struck. However, in hindsight there wasn’t
anything effective a hypothetical planetary government could have done.

No peacetime government would have been prepared, not in the
face of what was about to crush Gribbles’ Nook. The Krall, a warrior race, were
making their first strike into Human Space, to initiate what would be a very long
war against all of humanity, intended to last for generations.

Losing weaker warriors in battle was how the Krall improved
their breed of killers, striving for galactic domination through physical
supremacy. That, and with the advanced technology they had stolen through
conquests of previous races.

The Krall intended to motivate and anger the human
government into a fast response, to move quickly to a war footing. Massive atrocities
seemed the most efficient way to start. The novice warriors of the Graka clan were
more than eager to achieve this goal. It had been over two thousand years since
the Krall had exterminated the most recent alien race encountered. A dull
period of planned inter-clan warfare had filled the interval. It was past time
to write new history for the various clans.

Living Low Carb by Jonny Bowden
The Secret of Fatima by Tanous, Peter J;
Sleeping Beauty's Daughters by Diane Zahler
When It Happens to You by Molly Ringwald
I Want to Kill the Dog by Cohen, Richard M.
Contagious: Why Things Catch On by Jonah Berger
Family Linen by Lee Smith
Fear by Stefan Zweig
The Body Box by Lynn Abercrombie
Sherlock Holmes and the Discarded Cigarette by Fred Thursfield