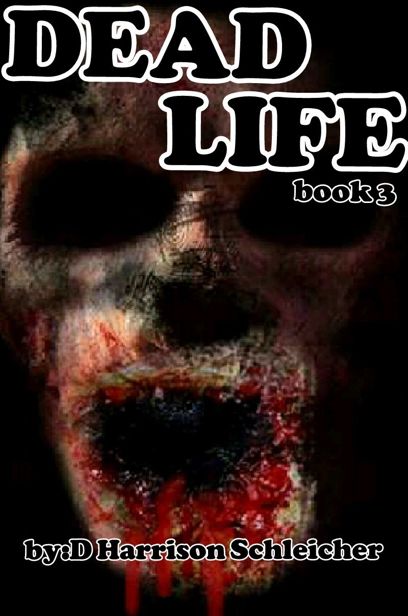 No part of this publication may be reproduced, copied stored in a retrieval system, or transmitted, in any form or by any means, without the prior written consent of the copyright holder, nor be otherwise circulated in any form of binding or cover other than that in which it is published and without a similar condition being imposed upon the subsequent purchaser.

Disclaimer: This is a work of fiction. All characters and events, unless those clearly in the public domain, are fictitious, and any resemblance to actual persons, living or dead, without the express written consent of the individual, is purely coincidental.

There, I think that covers it.

I would hope so.

Just get on with it.

Mind your own business.

Alright then here we go.

Rick, Gina, and I headed downstairs.  The constant sound of automatic gunfire was deafening.

I got to the bottom of the stairway as Al and Cindy came around the corner. Both of them were firing

“Where's Rita?” I hollered over the sound of gunfire.

Gina and Rick turned and ran back up the steps. Cindy went next and Al followed right behind her. I began firing into the approaching zombies. The onslaught slowed for a few seconds and I was able to get a look into the living room. The windows on each side of the door were broken out. A steady stream of zombies kept coming in through the now absent windows. Some stepped into the room but most fell in. They were shoved through from the press of bodies behind. Dead bodies were everywhere. Rita was in there somewhere but I couldn't see her. She must have been buried under the pile of bodies surrounding the couch. I opened fire and dropped most of the zombies in the room.

“Get your ass up here.” Al was standing at the top of the stairs looking down at me. He had both

shotguns slung over one shoulder, the two bags of grenades in one hand, and his rifle in the other.

When I got to the top of the steps, Al handed me a shotgun and opened fire with the other. He

blew the first few zombies coming up the stairs back down into the others coming from behind. It

reminded me of when I used to play dominoes as a kid. They all fell to the bottom of the steps in a

heap. I looked back. Gina and Cindy were standing behind us in the hallway with their assault rifles

pointed in our direction.

“He's dragging the mattress off the bed. Al wants to throw it down the stairs.” Cindy said.

“Do me a favor. Don't point those guns at us. Gina would you get our shoes out of the

bedroom? And while you're at it, how about buttoning up your shirt?”

She looked down at her exposed breasts and said, “Right.”

I turned back and joined Al shooting down the stairs which he was having a hard time doing.

He was looking over his shoulder trying to get a look at Gina's breasts.  There was a pretty good sized pile of bodies at the bottom of the steps slowing down the zombies trying to make their way up.  Cindy and Rick came into the hallway with the mattress from the master bedroom.  Al and I moved out of the way and they shoved it down the steps.  Rick went back into the bedroom, came out with a rocking chair, and pushed it down.

“Steve, help him get the dressers.  We'll throw them down the stairs too.”  Al said.

Rick and I went into the bedroom Gina was in.  She was pulling her shoes on.  Gina tossed me my shoes and I sat down on the edge of the bed next to her and pulled them on.

“I must have fallen asleep.”  He said.

Gina looked at me and I shrugged my shoulders.  “It could happen to anyone.”  I said.

“We'll talk about it later.  Help me get this dresser out there.”

We picked the dresser up and took it into the hall.  We sat it down and went to the other bedrooms.  We grabbed whatever we could to throw down the steps.  After a few minutes, the stairway was jammed with furniture.  It would take a while for the zombies to find a way to get up those steps.

“Gina and Cindy, will you two watch the steps for a minute?  I need to talk to my boys.”

Al took us into the master bedroom.  “Steve, tell me why you were an hour late waking me for my watch.”

“I fell asleep.  I'm sorry.  It's no excuse but I was tired.  I'm not a soldier.  I'm not much of anything.  I got Rita killed.”  Rick was really doing a number on himself.  He had tears streaming down his face.

“Look Rick, I fell asleep on my watch too.  We just can't let it happen again.  Pull yourself together.  We've got to figure a way out of here.”  I said to Rick.

“Put it behind you.  Just don't let it happen again.”  Al said to both of us.

Al looked out the window.  “There aren't many zombies outside.  Most of them are in the house.  We'll have to go out this window.  We can jump from the roof over the porch.  Get the girls in here.”

I went out in the hall to get Gina and Cindy.  The stairs were still blocked so we still had plenty of time to get out the window.  When we went back into the room, Al had the window up and the screen out.  Rick was already out on the roof.

“Close the door and lock it.”  Al said.  “We'll all get on the roof and then jump down.  It's only about ten feet so we should be okay.  Make sure you roll when you hit the ground otherwise you'll hurt yourself.  Let's get out there.”

We all climbed onto the porch roof.  There were only about ten zombies wandering around the yard.  From the sounds of the moaning coming from the porch, I could tell there were a lot more than that still trying to get in the house.

“Steve, you go first.  I'll cover you from up here.  Rick, throw his gun down to him and then you jump.  Gina and Cindy, throw the rest of the guns down to Rick.  When he's got them all, you two go.  I'll come down last.  Steve, watch the porch.  When those bastards see you, they'll come pouring off there.  Be ready.  And Steve, don't start shooting until you have to.  You have the porch and I'll take the ones in the yard.  Let's go.”

“What about the grenades?”  Cindy asked.

“We can't take them.  If we throw them off the roof, we could all get blown to hell.”  Al said.

I stood at the edge of the roof and looked down.  Al said it was ten feet but it looked more like twenty to me.  I didn't hesitate.  I jumped.  The ground came rushing up at me.  I hit and rolled.  Damn, that hurt.  I looked up at Rick and he tossed my rifle down to me.  The zombies on the porch hadn't noticed me but the ones in the yard had.  The closest was about twenty feet away and headed my way.  I wished I had my sword.  Rick jumped down and rolled to a stop by my feet.  He got up and hobbled back closer to the porch.  The guns started coming down to him.

The zombies in the yard were closing in on us.  The closest one was almost on me.  I started to hit him in the head with my rifle when I heard the first gunshot.  It dropped to the ground.  Al had started shooting.  He shot every one of those zombies in a yard.  That man could flat out shoot.  In less than fifteen seconds, they were all dead.  I looked at the porch and the zombies up there were all looking at Rick and me.  There was nothing I could do but open fire.  The last rifle came down to Rick and he joined me.  I moved away from the porch to draw their attention away from the girls.

“Stay there and make sure they all get down okay.”  I shouted to Rick.

Out of the corner of my eye, I saw Gina hit the ground.  Cindy came down right behind her.  They each picked up a rifle and opened fire.  There were zombies coming from the side of the house and the girls concentrated their fire on them.  Where the hell was Al?

The stream of zombies coming from the side of the house had slowed.  Cindy and Gina kept watch for more.  Rick was watching the yard.  I kept firing at the windows.  Al finally jumped down.  He rolled and came up laughing.

There was a huge explosion and the back part of the house blew up.  Shit was raining down everywhere.  Pink insulation was floating down and we were all covered with the stuff.

“I wasn't going to just leave all those grenades behind.”  Al grinned.

Cindy went up to Al and hit him in the shoulder.  “Look at me!  I'm covered with this shit.  And it itches.”  She may have sounded irritated but she had a smile on her face.

“There's a couple houses back up the road.  We'll find one and get cleaned up there.”  Al said.

We started back to the vehicles, turning to shoot at the zombies still coming out of the house which was now on fire.

“You know how much I paid for those grenades?  Waste not, want not.”  Al laughed and got in the truck.

My name is Tim Downing. I'm a first lieutenant in the United States Army. I joined the reserves while still in high school; against the protests of my father. My parents had divorced when I was ten years old. My mother remarried a few years later and we moved away when her new husband, who was in the army, was stationed in Hawaii. My dad worked in a grocery store in St. Charles, Missouri so of course I had to leave him. Moms new husband John advised me to join the army. Dad strongly objected so I compromised. That's how I ended up in the reserves. I liked and needed the structure in my life that came along with being in the service. As a kid I was an average student at best and it seemed like the service was my best option.

While still in the reserves, I went to college and did surprisingly well. Officers' training followed and I joined the regular Army. I finished in the top two percent of my class and was offered a position as liaison officer to Major William Stevens. We would be working under General Lenard Simmons, the Pentagon's adviser to the NSA. It was exciting. I was 24 years old fresh out of college and working for the National Security Agency. The excitement lasted for about a week.

I spent my days at a computer monitoring web sites. Everything is watched closely by our government. Internet, TV, phones, cell phones, books, magazines, you name it, we watch it. Since 9/11, the threat from terrorists was taken seriously and the NSA was the first line of defense for our nation. It wasn't often that we found anything but when a threat was detected, action was swift and decisive. It sounds exciting. It's not. Once a perceived threat is discovered, my sections part in the process is over. In college I majored in Criminal Justice with a minor in Computer Science. I wanted to join the Military Police and see some action. Instead I sat at a desk all day watching You Tube.