“And I think she’s worth ten to the tenth power of you.”

Luther’s glance switches from Jonathan to me and a mi-

“I know how these things work. You take some sports team

to state and run for student body office and freshmen girls

swoon as you walk by. So follow through on that, publicly claim

me as a friend so your star power rubs off on the nerd boy, and

Luther shakes his hand. “Okay. But I’d better have a girl-

friend before winter break. And if you two ever,
ever
kiss in front of me, the truce is off. ”

I slug Luther in the shoulder with my Gidget hand. He

fakes like it hurt, and Jonathan moves in as if to protect Luther

from me. Luther cowers behind Jonathan, I say some old-timey

gangster lines like “Why I oughta...” and it’s all stilted as if we’re

Jonathan walks me to world history. After, he’s waiting for

me in the hall, and my heart startles, as if I hadn’t been sure

yet that he was real. I think of the Keats line, “Nothing ever

becomes real till it is experienced.” I think it hard, taste its truth

He’s wearing basketball shorts that hang past his knees. I

can see pink scars on the backs of his calves. Jet pack burns.

On the way to English, he asks me on a date for Friday, but

I’m busy all weekend. It turns out I have an uncle and a couple

cousins. Now that Mom isn’t in hiding, I’m going to meet my

people do? Go to dinner and a movie?”

There was a time when, if someone had told me one day

I’d go on a date with Wilder, I would have flat-pellet-shot them

in the face. Generally speaking, if a guy breaks your jaw and

leg and cuts off your robotic arm, you file charges and get a

restraining order. The only exception is when subtle machina-

tions are needed to save the world from a massive, catastrophic

alien takeover. But in
no
other circumstance.

I think it’ll be my first real date.

After school Luther and Laelaps come over. We do home-

work. I love that the highest expectation I’m currently facing is

to write an essay.

Mom has office hours at the university all afternoon. Dad

home five different kinds of cheese. When I insist my love of the

stuff was mysteriously knocked out of me somewhere between

the stratosphere and the troposphere, he makes endless puns

(“Cheddar is as gouda cheese as you can hope to try. But it’s na-

cho cheese, so leave my provolone.”). I laugh because I want to.

and hear about my first day—but they okay the movie, so I text

Jonathan, and he responds immediately. I don’t think he gets

many calls. He’s lost his family, his old friends, his home. He’s

legally emancipated and living alone in a tiny apartment I plan

to call his lair.

Later, Jonathan pulls up in a powder-blue Camaro that’s

seen some hard living. It’s not a convertible. Mom and Dad

watch me go from the front stoop.

“Nice wheels,” I say as he opens the passenger door for me.

Jonathan shrugs. “It was the right price.”

“So, I take it you’re no longer burdened with your daddy’s

“All seized by the FBI. A judge allowed me a trust fund to

get me through college. After that . . . well, Howell offered me

I laugh. “Oh man, you and Howell are way too close to evil

genius to make that pairing comfortable.”

ing to me till I suffocate. Lots of falling. Dragon waving to me

from a window when HAL vaporizes.”

Jonathan is looking forward, his voice a little shy. “At least

I’m not in your nightmares.”

“Oh yeah, I forgot you! I’m hiding in the dark up in the

rafters, and you’re shooting at me.”

I rub his hair as if he were Laelaps. “It makes me feel a

little more chipper knowing you have nightmares too.”

I know what he means. I nod.

We’re at a stoplight. He picks up a coin and shoots it from

his fingers. I catch it in my palm. The impact is so light, it

wouldn’t have hurt even if I wasn’t still a little bit tougher. I’m

a battery. Maybe his whole body is a battery now of sorts.

“The effects will probably fade with time, maybe disappear

entirely when our brains mature,” he says.

I’m not brute strong, but I can do a lot of pushups. And in

token. Most of the nanites must still be inside me, and remnants

still inside Jonathan too, all in standby mode since losing their

tokens. I think I could reactivate the nanites. If I needed to.

“You know what’s amazing?” he asks.

I nod. I know lots of things that are amazing. But he

“I’ve never gotten bored with you.”

“Aren’t I a charmer? I mean, I get bored with everything.

But I’m not bored with you. And I don’t think I ever will be.”

“As far as compliments go, I give it a three.”

better than anyone in the world, and somehow you still like me.”

“You do. You say it with your
eyes
.” Stopped at a red light,

he looks at me, all mock-mystery, and presses his forehead to

mine. We stare at each other super close till I laugh first. The

I remind myself that teen brains haven’t developed the ar-

eas that are capable of lasting emotional commitment. But if I

don’t start forming all the connections I can now, didn’t Howell

say it’d be too late? I’m alive. I don’t want to wait to start living.

We park across the street from the theater. He opens the

car door for me, and we stand on the curb. The traffic stirs up

“I pledge to search the world over and bring you back

“It’ll probably be at the snack bar.”

“We can try there first, before scouring the world over.”

“I prefer black licorice myself,” he says. “They’re wrong

Without thinking about it first, I put my arms around his

neck. His arms go around my waist, as if they belong there, and

he sighs a little. He is warm from the car ride, his skin and

clothes all summer and noon in the fall evening. He feels new.

There were times when I thought I loved him. But I see

now that I didn’t really. Attraction, infatuation, and consterna-

tion do not love make. I don’t know if I love him now, but I like

him so much the joy is exquisitely painful. And this, too, is new.

I put both my hands up in his hair, my arms lifted. The

posture makes me feel vulnerable, exposed, but inviting too. I

stand on my toes, and I kiss him. He leans in, grateful, and

kisses me. I do not count the kisses. We are not spinning, not

flying or floating. Our feet are firmly on the Earth. My fingers

curl. His hand rises to my neck, exploring the ends of my short

hair. His other hand presses against my back. I am a part of

There’s a break in traffic. He holds my Gidget hand. We are

running across the street toward the theater, headlights point-

ing at us, white against black like the sun in space. And I think

this is my favorite part. Not the part where I saw Earth from

above, or the weeks blissfully ignorant in the lair. Not the part

where I swam through the guts of a ghostman ship, or when

This part. Jonathan and I holding hands and running with

nothing chasing us, the after-rain street shiny as Christmas or-

naments, the night behind us, the theater ahead. My right hand

is in his left, and Jonathan turns to look at me. Looks at me for

no other reason than he wants to.

And this is where I’ll end, before I know what happens

I would have floundered without the extraordinary help of

Goldblatt. You guys are seriously cool. All the folks of Blooms-

bury gave a lot of hours to this book, including Michelle Nagler,

to Ava Cabey for inspiration.
Gracias a
Rebecca Allred Clyde.

Super cheers to Kindra Johnson, without whose childcare

prowess I wouldn’t have finished a book since 2006. Extra awe-

some babysitting help courtesy of Kayla Huff and Maggie and

All the research was fascinating, but one standout title was

The Canon: A Whirligig Tour of the Beautiful Basics of Science

by Natalie Angier. I also appreciated Arthur C. Clarke’s
The

Fountains of Paradise
, the first novel featuring a space elevator.

tists! And I’m not as smart as they are, so any mistakes are mine.

Fist bumps to Heather Moody and Abigail and Eli Rupper, who

I should also acknowledge my outstanding high school

English teachers who showed me how to love poetry: Kathryn

Works quoted include Edgar Allan Poe’s “A Dream Within

dence of John Keats, W.B. Yeats’s “The Second Coming” and

adventure with me.
Besos y abrazos
. 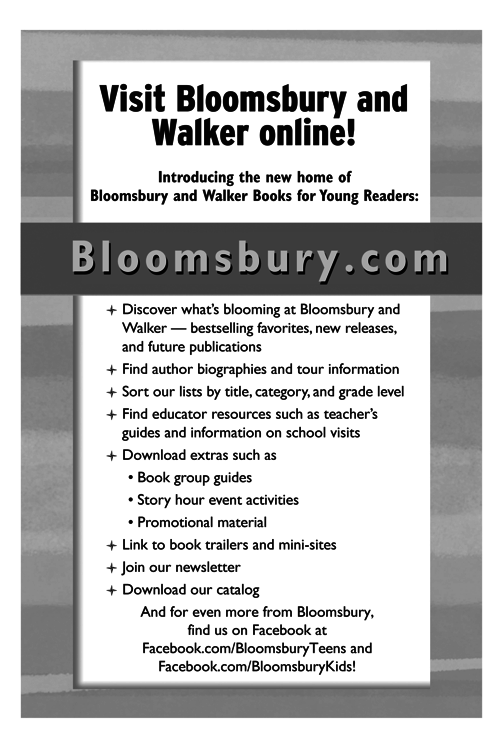