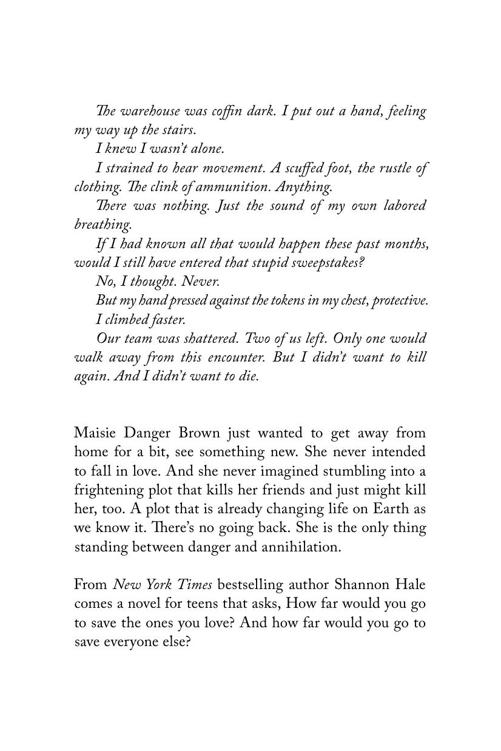 The warehouse was coffin dark. I put out a hand, feeling

my way up the stairs.

I knew I wasn’t alone.

I strained to hear movement. A scuffed foot, the rustle of

clothing. The clink of ammunition. Anything.

There was nothing. Just the sound of my own labored

If I had known all that would happen these past months,

would I still have entered that stupid sweepstakes?

No, I thought. Never.

But my hand pressed against the tokens in my chest, protective.

Our team was shattered. Two of us left. Only one would

walk away from this encounter. But I didn’t want to kill

again. And I didn’t want to die.

Maisie Danger Brown just wanted to get away from

home for a bit, see something new. She never intended

to fall in love. And she never imagined stumbling into a

frightening plot that kills her friends and just might kill

her, too. A plot that is already changing life on Earth as

we know it. There’s no going back. She is the only thing

standing between danger and annihilation.

comes a novel for teens that asks, How far would you go

to save the ones you love? And how far would you go to

author of Newbery Honor book
Princess Academy
and its

sequel,
Palace of Stone
, as well as the Books of Bayern,
Book

and
Calamity Jack
(co-authored with her husband, Dean

Hale), and three books for adults, including
Austenland
,

now a major motion picture. Shannon lives with her family

Awards and praise for
Palace of Stone

“Absolutely incredible . . . this is the book

we have all been waiting for.”

“Shannon Hale is a master of fantasy. In
Palace of Stone
,

she raises her own stakes with a gorgeously-written sequel

about the heartbreaking complications of revolution,

author of
Anna and the French Kiss

“Hale’s skill as a storyteller will charm her audience . . .

nobody else has quite the same knack for seamlessly segueing

between the folksy, intimate charm of an extended fairy tale

and the larger canvas and more epic scope of high fantasy.”

“Miri may be just a young woman from Mt. Eskel, but in

Palace of Stone
she proves once again that with quick wit

and brave words, one person really can change the world.”

the story hers and her people’s. There’s lovely . . . descriptions

and vivid warmth to Miri’s friendships, her longing for

home and her thirst to learn more and more.” 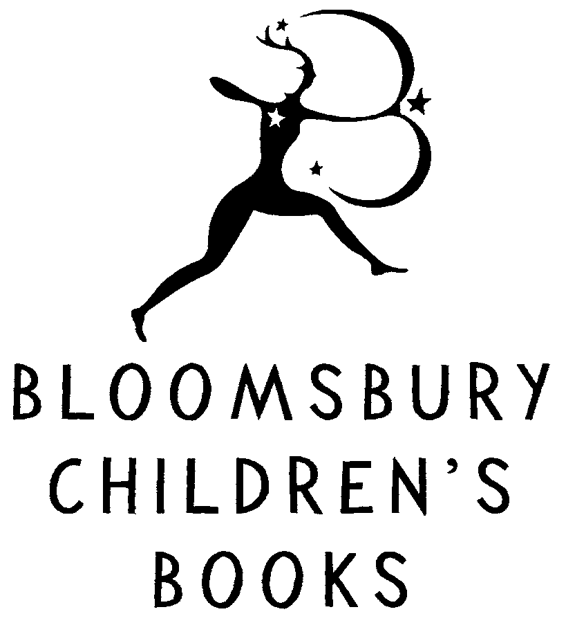 Please send us two copies of your review.

All specifications are provisional. This proof should not be quoted

without comparison to the final corrected text. It does not reflect

the quality, page size, or thickness of the finished book. This galley

was printed in the U.S.A.

THE BOOKS OF BAYERN

Book of a Thousand Days
~

The Actor and the Housewife

First published in the United States of America in January 2014

by Bloomsbury Books for Young Readers

For information about permission to reproduce selections from this book, write to Permissions, Bloomsbury BFYR, 1385 Broadway, New York, New York 10018

All papers used by Bloomsbury Publishing, Inc., are natural, recyclable products made from wood grown in well-managed forests. The manufacturing processes

conform to the environmental regulations of the country of origin.

For Wren, for many reasons, but mostly because she’s awesome

The warehouse was coffin dark. I put out a hand, feeling

my way up the stairs.

I knew I wasn’t alone.

I strained to hear movement. A scuffed foot, the rustle of

clothing. The clink of ammunition. Anything.

There was nothing. Just the sound of my own labored

If I had known all that would happen these past months,

would I still have entered that stupid sweepstakes?

No, I thought. Never.

But my hand pressed against the tokens in my chest, pro-

Our team was shattered. Two of us left. Only one would

walk away from this encounter. But I didn’t want to kill again.

And I didn’t want to die.

Every superhero has an origin story. Mine began with a

“Mom?” I said, pulling a box of Blueberry Bonanza out of

cause I’m that wonderful. Really it was an excuse to escape.

When she’d returned from the store, I’d been working on Ac-

“They were on sale,” Mom said. “I thought you’d like to try

I opened the box and poured some “Fruitish Nuggets and

Marshmallow Fun” into my hand to show her.

“
Guácala
,” I said. The Spanish word for gross sounded so

high shelf when I noticed the words “Astronaut Boot Camp” on

the back of the box: SWEEPSTAKES OPEN TO US RESIDENTS AGES

“Thanks for the spontaneous help,” Mom was saying as she

put away the fridge items. “Am I correct in assuming I’m saving

“Now Mom, you know I find nothing so thrilling as calcu-

lating the area of a triangle.”

I shelved the box, too ashamed to show Mom the sweep-

stakes. Since I was five I wanted to be an astronaut. But little

kids always dream of being astronauts, princesses, or spies and

then grow up to realize that’s impossible. I should have out-

grown my space fantasy by now.

“Hey, Maisie,” Dad said, coming in from the garage. “Did

you hear about the dog that gave birth to puppies in the park?

She was arrested for littering.”

“Heard it,” I said. “Can you really not remember which

puns you’ve tried on me?”

“I have a photographic memory, but it was never developed.”

“Heard that one too.”

Newly motivated, I hurried through math so I could get on

In order to enter the sweepstakes online, I had to fill out a

survey. It was crazy long.

“Wow, there’s something shockingly unnatural about

bright-blue food, isn’t there?” Dad called from the kitchen.

How had he even found the cereal? “Did you know there’s no

“The color blue is an appetite suppressant, our body’s pri-

mal instinct to warn us away from poisonous things,” he went

on, in full lecture mode. “Blueberries are actually purple skin

around green pulp. And red foods like maraschino cherries owe

their color to the ground-up bodies of female cochineal insects.”

“Mom bought the cereal,” I called back. I started to feel

guilty, as if I were lying to my parents, so I added, “Um, read

the back of the box.”

“Oh!” Dad leaned around the kitchen wall. “Maisie, you

know the odds of winning the sweepstakes must be astronomi-

cal, no pun intended. For once.”

“I know. I just thought, why not enter, right?”

“Okay then. When you grow up to be a famous astronaut,

don’t forget your humble roots. Those who get too big for their

britches will be exposed in the end.”

And the survey went on and on.

“What?” Dad was sitting on the couch now, reading a sci-

ence journal and absently rubbing his bald spot. These past few

years, the spot had degraded into more of a bald territory. He

only had a rim of puffy hair left. I was afraid I’d hurt his feelings

if I suggested he just shave it all off.