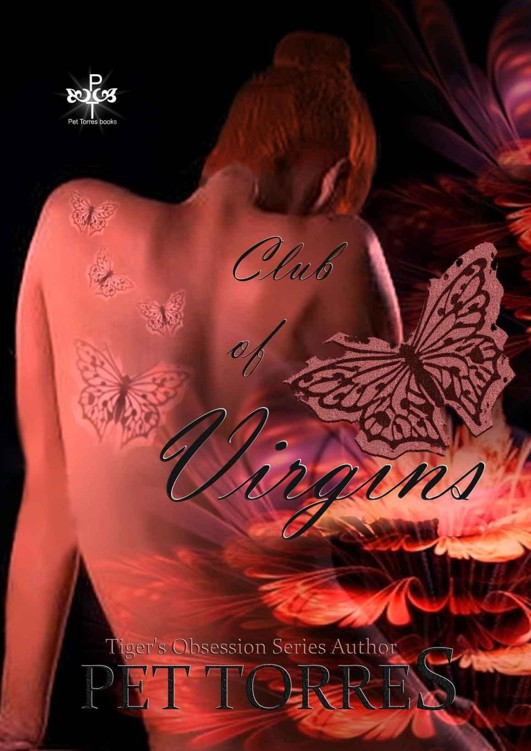 This book is a work of fiction. The names, characters, places, and incidents are products of the writer's imagination or have been used fictitiously and are not to be construed as real. Any resemblance to persons, living or dead, actual events, locales or organizations is entirely coincidental

All rights are reserved. No part of this book may be used or reproduced in any manner whatsoever without written permission from the author.

“Let he who is without sin, cast the first stone.”

Sin
exists; nevertheless
forgiveness
is above all something to absolve it.

Sentence from a song.

is the name of the new young adult romance by
Pet Torres,
author of the
TIGER OBSESSION
Series.

Club of Virgins is a romance that tells the story of young Peta. She is a young woman who is going through a difficult time in her life.

Her solution is controversial and irreversible.

After three years, she enters college and meets a young man from a conservative family.

Something Peta did in her past could now haunt her in the future.

This is another part of my artist’s soul that I want to share with you...

I thank God for this gift. I managed to finish it in three days. This story shows how much I have always loved writing.

I thank my dear readers for their affection for my work, the band Kings of Leon, and the singer Sia.

I wrote this entire romance listening to their songs.

I am Petalouda, better known as PETA.

The origin of my name is Greek. My mother chose this name because it
means butterfly in the Greek language.

My mother has always been a great admirer of butterflies.

I was born on March 4 and the number four in the animal game of chance is represented by the figure of a butterfly.

So it is that so many butterflies are in my life ...

Well folks, the Club of Virgins is open for business ...

Pet is a young woman who is going through the worst nightmare of her life. Her mother is sick and in order to save her, Pet will have to sacrifice her purity secretly.

Three years later, she meets a young man at college called Natanael. He is from a traditional and conservative family.

Something Peta did in her past may haunt her in the future.

When I turned eighteen, I decided to get a tattoo on my body. Early on, my mother was against this idea. She wanted to change my mind and make me forget this concept, but when she realized that no matter how hard she tried this would never happen, she decided to support me.

“All right, Peta, you have convinced me. Here's the money to get that crap tattoo!”

She raised a hand to me and I saw some notes. A fifty dollar note was between her fingers.

“What a costly tattoo!” She grunted and inhaled her cigarette. Yes, unfortunately my mother had been a smoker for over ten years. She started this damn vice a few years after my father’s death.

Finally, I reached out and I took the money and looked into her face.

“It is costly because I’m getting more than one.” I smiled at my mother and then moved my lips to her cheek and kissed it.

My mother smiled after inhaling again and turned her back to me. She turned and headed towards the kitchen to begin preparing our lunch.

I ran toward the front door, tucking the money into the pocket of my denim shorts.

“You're the best mom in the world!” I screamed as I opened the door and ran out. “Never doubt it!”

I ran outside the house.

Hours had passed by and I was still in the room of the tattoo artist, sitting on a table with my back to him. I felt his hand holding my skin as he tried to find the best way to start making the final drawing on my back.

The tattooer was in a white coat, wore glasses on his face and his hands were protected by disposable gloves.

Moments later, I bit my lips and groaned when finally the electric needle began to pierce my skin.

It took hours for the tattoos on my body to finally be finished. This was a huge sacrifice on my part, but I think all this effort was worth it because I would not have had such a beautiful design on my back.

It was night when I got home. My mother was worried about my delay and had filled my phone with calls not knowing I could not return her calls. I was simply too busy in the tattooer's room and also I knew exactly what my mother’s questions would be:

What time will you get home?

You will not be late, right?

I stepped into the living room and saw my mother sitting on the couch in front of the TV. She had smoked more than a dozen cigarettes in my absence.

“You are so late! I was worried about you! I did not even know that tattoos take such a long time!” She complained and began to light another cigarette. Maybe now she should smoke another cigarette in the form of thanks.

“Yes, it took quite some time.” I smiled. “But it was worth it mother! My tattoos are beautiful!”

“I want to see them!” She said looking at me.

My mother had light brown hair. Her eyes were light brown also. I was a redhead, a natural redhead, my eyes were blue and my skin and body was freckled. I had inherited the physical characteristics of my father. He was Dutch. When he migrated to our country, he met my mother and they were married.

My father died seven years after coming to Brazil and my mother raised me on a pension which was barely enough for both of us. It was our only maintenance.

“Come, daughter! Show me these tattoos!”

“Calm down, Mom. Wait till I take off my shirt,” I said, turning my back to her. I pulled up my blouse, it went over my head. Soon I was just in my pink bra with white polka dots.

“My God, daughter!” My mother said looking at my back. “It looks beautiful! I love it!”

My tattoo was of four colorful butterflies that were flying in the direction of my shoulder. I chose this design not only to honor myself but also to honor my mother.

Tomorrow When The War Began by John Marsden
CODE X:Episode 1 by M.R. Vallone
Desire After Dark: Lords of Pleasure by Jo Carlisle
Alyssa's Secret by Raven DeLajour
Budding Star by Annie Dalton
Hollywood Husbands by Jackie Collins
Memoirs of a Girl Wolf by Lawrence, Xandra
Cuffed by Kait Gamble
Saved by the Alien Lord: Sci-fi Alien Invasion Romance (Warriors of the Lathar Book 2) by Mina Carter
The Age of Mages: Book I of the Mage Tales by Waters, Ilana