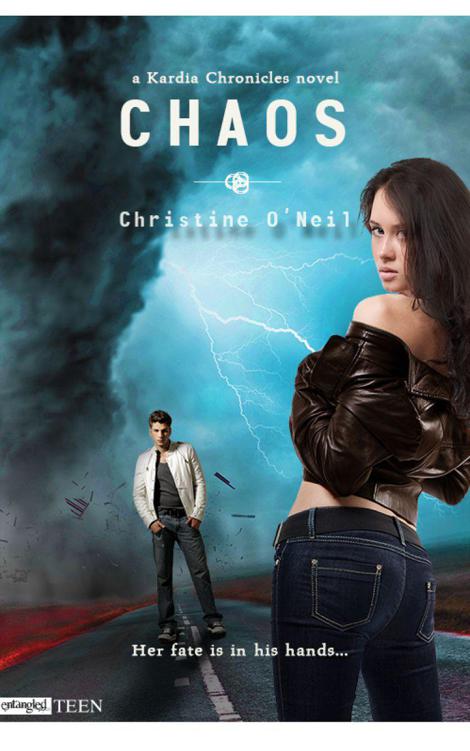 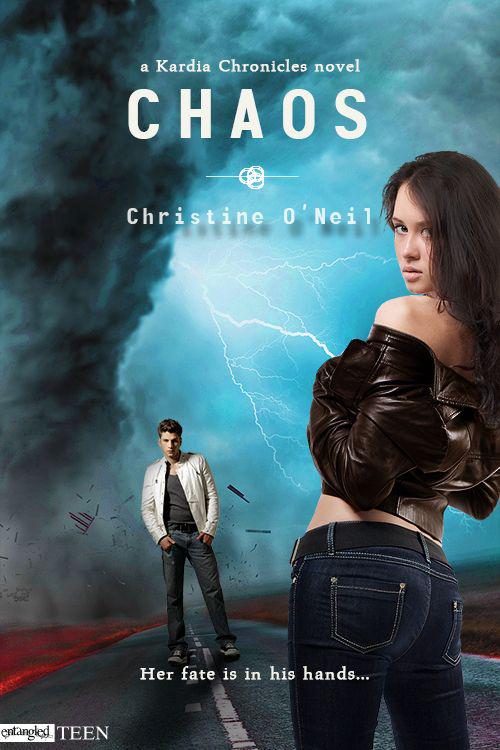 Copyright © 2013 by Christine O’Neil. All rights reserved, including the right to reproduce, distribute, or transmit in any form or by any means. For information regarding subsidiary rights, please contact the Publisher.

This book is for my very own Bink(s): Mike, Joe, Mary, Marcy, and Nic. Some people get lucky. They find a friend when they’re little and that friend sticks around a lonnnnng time.
Nobody gets as lucky as we did.
You guys are the most beautiful-est, most magical-est, and most swimming-est, and there is no one in the world I’d rather catch salamanders or play kick the can with. And, most important of all, I am…NOT IT!

“If you come upon a grove of old trees that have lifted up their crowns above the common height and shut out the light of the sky by the darkness of their interlacing boughs, you feel that there is a spirit in the place, so lofty is the wood, so lone the spot, so wondrous the thick unbroken shade.” —
Seneca

My boyfriend is obsessed with video games. Like, that’s all he ever wants to do. Even if I get him to take me on a date, we end up at Joe’s Crab Shack, and the second we’re done eating, he’s dragging me into the back room arcade to make me play some stupid game with him. What can I do to get him to stop this B.S. and pay more attention to me?

I’m going to skip the A and lob a Q your way: Why do you even want to be with a guy who’s too dumb to recognize what he has? You might not want to hear it, but my advice? Bounce. There are some guys—even high school guys, if you look really hard—who are mature enough to realize there’s more to life than video games. Join drama or chorus and maybe you’ll find a guy who’s interested in the arts. Like the intellectual type? Join the debate team or the academic squad. There are a ton of options out there just waiting for you. Don’t sell yourself short or settle for less than you deserve.

I clicked my mouse over the send icon with a satisfied sigh. Today’s Q&A for my anonymous column, “That’s What
She
Said,” was officially in the bag and on its way to my loyal readers. Not bad for the back half of a forty-two-minute study hall on a Thursday.

I logged off the PC and then scooped up my messenger bag just as the bell rang. Next stop, chem lab. Not exactly my favorite subject, but at least my BFF, Libby, was in that class with me.

Dread pooled in my gut as I pasted on a smile and turned to face Hortense Verbiglio, harpy of the computer science department. Mrs. Verbiglio was even less attractive—both inside and out—than her name suggested, and her stopping me could mean nothing good.

“Yes, Hort—erm, Mrs. Verbiglio.” Pretty much the whole school privately referred to her as “Hortense,” so sometimes it was hard to make the switch, but if she noticed my glitch, she didn’t let on.

“What exactly did you accomplish today? I saw a whole lot of type-ity type-ity.” She wiggled her stubby fingers like she was tapping a keyboard. “But I didn’t see you print your work. Do you mind telling me what you were doing all period? This is study hall not goof-off time.”

“Oh, I know. It’s just, I had a big report to do and didn’t want to use up all your paper.” Because I was a real sweetheart like that and all.

She crossed her beefy arms over her chest and stared me down for way longer than was comfortable. Finally, she tipped her head in a short nod. “Go ahead, then. Next time, though, I’ll be expecting to see your work.”

The tension in my shoulders released, and I shot her two cheerful thumbs up, then busted ass toward the door before she changed her mind and kept me there for more grilling. The school administration allowed us what felt like thirty-seven seconds to get from one class to another, and she’d just wasted twelve of mine. If I was late for chem, it was squarely on Hortense.

Libby’s musical voice had me skidding to a stop in the middle of the crowded hallway, which earned me a few dirty looks and someone’s jam-packed book bag slamming into my shoulder blade.
Ouch.

“Oh, good,” Libby gushed breathlessly, her hazel eyes bright with relief. “You’re late, too. Now I don’t have to walk in alone. I was finishing up this test in psych. It was brutal.”

She fell into step beside me, although her runner’s strides were much longer, so I had to hurry to keep up. Yet another reason to despise being five-three. At five-eight, Libby liked to complain her height was a guy deterrent, but since she’d been asked to the Snowflake Swirl by four different people already and it was still technically autumn, I’d have to call bullshit on that theory. Either that, or the height issue was somehow offset by the fact that her legs went on for years and her bra could comfortably hold a grapefruit in each cup. Not that I cared. Being “blessed” with a solid set of oranges myself, I was of the opinion that boobs mostly just got in the way. Running in gym class was embarrassing as fuck, and forget about sleeping on my stomach. If they were any bigger, they’d be worthy of serious male attention and that was the last thing I needed.

I was done with guys.

Not in that fake, I-say-that-but-deep-down-I-really-want-a-boyfriend kind of way, but in, like, the seriously-I’d-rather-eat-maggoty-cheese kind of way. No relationships. Not for me. Not now and maybe not ever. Who I am…
what
I am, and what I’m capable of? Everyone’s better off this way.

“I have to stop at my locker real quick.” I veered to the right and cut through the crush of kids heading straight at me, like wildebeests to a watering hole. Libby followed and then stood by me as I fiddled with the lock.

“What’s that?” She pointed to a white piece of paper sticking out half an inch from one of the slots in the olive metal door.

I tugged the padlock open and flicked the catch with my thumb. “Dunno.” Maybe Bink had left me another note. Bink was my neighbor, bud,
and
—most days—my ride home. Last time I’d found a note in my locker, his cell phone had died and he needed to bail early. I seriously hoped this wasn’t a repeat performance.

I mentally ran down the list of people I could bug for a ride and came up empty. Libby always had to stay after for some activity or another, and I only really had two other people I could call “friends” and neither lived near me. I wrinkled my nose in anticipation of the dirty-sneakers-meets-day-old-bologna smell of a bus filled with kids who’d had last-period gym and opted not to change clothes. With a sigh, I pulled open the door and the white rectangle floated to the floor.

Libby bent to grab it and read it out loud. “Dear Sad and Lonely…” She trailed off and went quiet for a few seconds until her peachy complexion went hot pink, and then she gasped. “Oh my God. Holy… Oh, Mags, you are so not going to like this.”

I snatched the paper from her, trying to ward off the growing pit in my gut.

Since I can almost guarantee
She
is about to give you some seriously shite advice like she does every week, let me be the voice of reason. Your boyfriend is just like most high school guys. Cut him some slack and, even better, why not offer to learn how to play some of the games he likes? He’d probably appreciate the effort and might even take you somewhere nice after. If that doesn’t work, sit him down and let him know how you’re feeling so he can tell you what’s going on with him. Could be that constantly calling the things he likes stupid isn’t the best way to get what you want in this situation, yeah? In any case, don’t let the ramblings of some bitter emo chick who’s probably never had a boyfriend ruin your relationship.

My skin prickled with alternating hot and cold flashes while my brain churned. The shock was too thick to let the anger in right away, but as stunned as I was, I knew exactly who was behind this. There was only one person in the whole school who would use the word “shite.”

Opinionated, annoying, hot—did I mention annoying?—Mac Finnegan, who had barely given me the time of day since he’d come to Crestwood High. Mac Finnegan, who thought he was soooo cool with his Irish accent and his mocking smile. Mac Finnegan, who inexplicably made me want to lick him like an ice cream cone and then immediately rinse my mouth out with acid.

How had he discovered my secret? Only Bink and Libby knew I was the girl behind “That’s What
She
Said,” and I would have bet everything I owned that neither of them would have ratted me out.

Didn’t matter though. One way or another, he knew.

Even worse, he’d chosen to taunt me with it.
Bitter emo chick who’s probably never had a boyfriend
, indeed. I had a boyfriend once, and it hadn’t ended well for either of us. I was in no rush to repeat the experience. Besides, what did this Irish asshat care?

Anger tightened my chest, and my vision went hazy. I could feel the power rising in me, clawing to get out, roaring to be heard. The hair on my arms stood on end as I tried to breathe through it, to let the fury dissipate and flow out of my pores in harmless pings of energy, but it was no use.