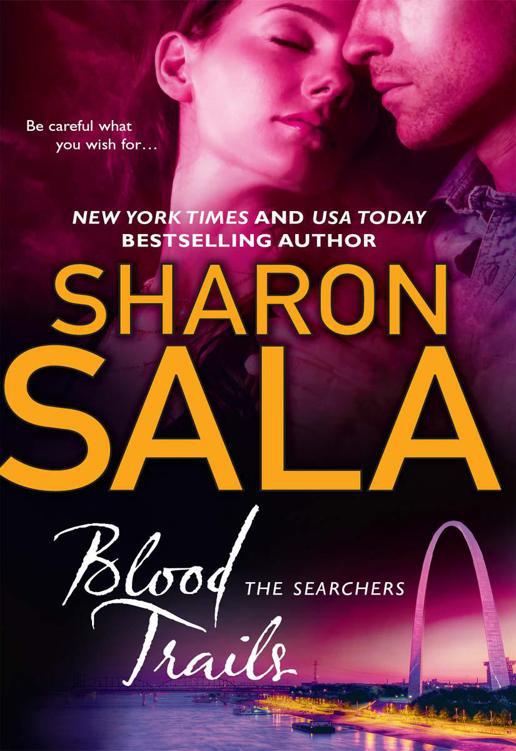 All rights reserved. Except for use in any review, the reproduction or utilization of this work in whole or in part in any form by any electronic, mechanical or other means, now known or hereafter invented, including xerography, photocopying and recording, or in any information storage or retrieval system, is forbidden without the written permission of the publisher, MIRA Books, 225 Duncan Mill Road, Don Mills, Ontario M3B 3K9, Canada.

This is a work of fiction. Names, characters, places and incidents are either the product of the author’s imagination or are used fictitiously, and any resemblance to actual persons, living or dead, business establishments, events or locales is entirely coincidental.

MIRA and the Star Colophon are trademarks used under license and registered in Australia, New Zealand, Philippines, United States Patent and Trademark Office and in other countries.

Praise for the novels of

“Sala’s characters are vivid and engaging.”

“Sharon Sala is not only a top romance novelist,
she is an inspiration for people everywhere
who wish to live their dreams.”

“Veteran romance writer Sala lives up to
her reputation with this well-crafted thriller.”

—
Publishers Weekly
on
Remember Me

“Perfect entertainment for those looking for
a suspense novel with emotional intensity.”

—
Publishers Weekly
on
Out of the Dark

ON THE EDGE:
“Capsized”

OUT OF THE DARK

Look for Sharon Sala’s next novel
NEXT OF KIN
available February 2012.

It is true that the sins of the father
are often visited upon the child.
We come into this world through pain.
Pain is a constant throughout our lives, whether
from a brief physical pain, an enduring emotional
pain, or a damaged soul that cannot heal.

Having to also endure the shame of someone
else’s transgressions is without doubt the hardest,
and the most unfair. Bearing a damaged name is
one pain too many—a pain no child should suffer.

I dedicate this story to the innocents,
whose only sin was to carry a name
with a shame not of their making.

T
he ranch house was quiet—too quiet. It should have been filled with energy and activity—voices, snippets of conversation and laughter, the scent of something good baking in the oven.

But Andrew Slade’s death had been the beginning of the end of what had been. There was nothing to be done now but look toward what was—or, in the case of his three daughters, what
could
be. The revelation he’d dropped on them at the reading of his will had torn the family apart.

His oldest daughter, Holly, was the only one of them left at the ranch now, along with Robert Tate, Andrew’s best friend and ranch foreman—and the love of Holly’s life.

But Robert—Bud to his friends—didn’t know about Holly’s feelings, and she was so used to keeping them a secret that revealing them now in the midst of so much turmoil didn’t seem possible.

Her sisters, Maria and Savannah, were already gone. They’d jumped into the search for answers to their pasts without hesitation, while Holly had lingered. She couldn’t wrap her head around what she’d learned without getting sick to her stomach. Even now, when she should have been making travel plans, she was still at the Triple S—still wavering as to what she should do and replaying the video that had ripped their world apart when they’d gathered in the office of their lawyer, Coleman Rice, and seen it for the first time.

She sat now within the quiet of the family den while a log burned and popped in the fireplace behind her, her gaze fixed on the television, and rewatched the video. As soon as it ended, she played it again. Andrew’s image and voice were a source of comfort, but at the same time they fed her grief.

“Hello, my daughters. Obviously, if you’re seeing this, I have passed on. Know that, while I am sorry to be leaving you behind, my faith in God and the knowledge that I will be with my beloved Hannah again is, for me, a cause to rejoice. However, what I have to say to you is something I’ve dreaded your entire lives, and I’m ashamed to say I chose the easy way out and left it for you to hear after my passing.”

Holly held her breath. This time she knew what was coming, but the words were still impossible to absorb.

Holly jumped when she felt a hand slide across her shoulder, then swallowed past the lump in her throat to keep from crying when she realized it was Bud. Somehow he’d come in and she hadn’t even heard him.

“There is more. You are not sisters.”

Holly hit Pause, then clasped Bud’s hand as she turned around. “Did you need me?”

A dozen thoughts of what he might say slid through Bud’s mind, but the one that mattered most was one he’d never said. Yes, he needed her: in his heart, in his life, in his bed…forever. “Not really, honey. I just came in to see if you were okay.”

Holly’s shoulders slumped. “Obviously I’m not, or I wouldn’t still be wallowing in this.”

Bud slid onto the couch beside her and took her hand.

“Let it play out and then we’ll talk.”

Holly hit Play. Andrew’s voice filled the silence between them.

“By now, I suspect your grief at my passing has turned to shock…even anger. I understand. But what you three need to understand is…I believed with every fiber of my being that, as I was following my calling as an evangelical preacher, God led me to each of you at a time when you needed me most. There are journals that I’ve left with Coleman, one for each of you. Everything I know about your past is in there, along with why your mothers put you in my care.

“Maria, you were the first one. You were born Mary Blake, in Tulsa, Oklahoma. Your mother had a hard life. She was, for lack of a better word, an escort at the time of her death. You were four years old when you witnessed her murder. As she lay dying, she begged me to take you and hide you. The details as to how it all happened are in your journal. To my knowledge, her murder was never solved.

“Savannah, you are actually Sarah Stewart, from Miami, Florida, and the second child to be given to me. Your mother was dying of cancer and had come to my tent meetings to pray for healing. By then Maria had been with me for nearly six months. You were barely two. You and Maria hit it off immediately when your mother came to hear me preach, and she saw the bond between you two. On the last night of the revival, she came to me in a panic. She and your father were not married, but he had never denied you, and he played an important role in your life. According to her, he was also a member of a very rich, powerful local family, and he had informed them of his plans to marry her. The night she came to me, she was sobbing uncontrollably. Your father had been killed in a car accident early that morning, and already she had received a threat on your life. Aware that she had only weeks to live and no one else to whom she could turn, she begged me to take you and raise you with Maria. So I did. It was then that I began to understand I was being led down this path by a power greater than my own.

“Holly, you are my oldest, but you came to me last.”

Holly started to cry. Bud let go of her hand and put his arm around her shoulders, holding her close as the video continued.

“You were born Harriet Mackey and were five when you and your mother showed up at a revival I was holding in St. Louis, Missouri. She seemed troubled, but I thought nothing of it. At one time or another we are all troubled by something or someone. On the fourth and last night of the revival, I thought everyone was gone from the church. Maria and Savannah had gone to sleep in the pastor’s office, and I was on my way to get them when your mother showed up at the door with you and a suitcase. Her story was staggering, but at that point, I didn’t question God’s plan. What you need to know is that she did not give you away. She was convinced that her husband, your father, was a serial killer the Missouri police had been hunting for nearly a year. She feared what the notoriety would do to your life when all was revealed, and that you would be branded as a killer’s daughter. She was going to turn him in, and then come and get you and start over in a new place. Only she never came after you, and no one was ever arrested for the murders. I fear she paid for her bravery with her life.