Read Between a Rock and a Hard Place Online

Between a Rock and a Hard Place 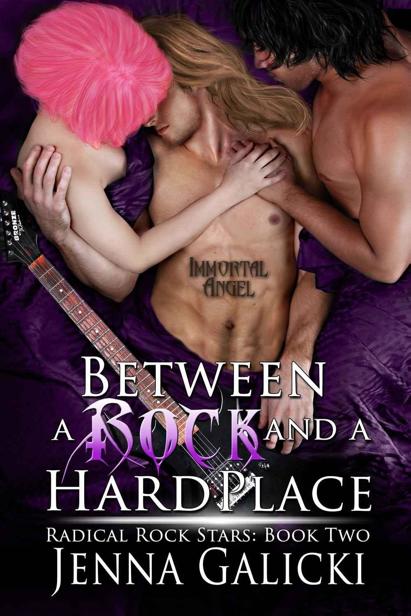 Between a Rock and a Hard Place

This book is also available in print.

I need them both, in my life and in my bed, and I’m not living without either one of them.

I’ll do whatever it takes, even if it costs me everything I’ve ever wanted.

I’m Tommy Blade, The Prince of Punk Rock, and this is the continuation of our story.

Warning:  This book is for mature audiences only.

When Jessi Blade is forced to miss the first leg of Immortal Angel’s world tour, Tommy Blade and Angel Garcia are alone together for the first time.  Their romance flourishes and brings them closer together, but time apart puts a strain on Tommy and Jessi’s marriage. The demanding schedule of a world tour, pressure from the record label, and a wife who feels neglected leaves Tommy under a blanket of anxiety.  He’s helpless as his perfect life slowly falls to pieces.

When Jessi Blade finally catches up to Tommy and Angel four weeks into their world tour, she begins to feel like an outsider.  She’s not about to take a back seat to Angel, and competes for Tommy’s attention.  Tired of the rivalry, she begins to wonder if they would be happier without her.

Angel Garcia is trying to hold their relationship together, but Jessi’s animosity and Tommy’s nervous tension is a heavy load to carry.  Before long, it becomes clear that their life and the band are doomed unless they work out their differences.

This book is not transferable.  It is for your own personal use.  If it is sold, shared, or given away, it is an infringement of the copyright of this work.  No portion of this book may be transmitted or reproduced in any form, or by any means, without permission in writing from the author or publisher, with the exception of brief excerpts used for the purposes of review.

This book is for ADULT AUDIENCES ONLY.  It contains material which may be considered offensive by some readers.

This is a work of fiction.  Names, characters, places and incidents are solely the product of the author’s imagination and/or are used fictitiously, though reference may be made to actual historical events or existing locations.  Any resemblance to actual persons, living or dead, or yet to be born, is purely coincidental and entirely unintentional.

I have so many people to thank for their support and encouragement that if I addressed them all by name, I would no doubt forget to mention someone. I would probably be more upset than the person I unintentionally omitted.  Therefore, I would like to extend a broad thank you to everyone. You know who you are – the readers; the bloggers; my beta readers; everyone who answered my questions about Asian and European culture, landmarks and slang; my dear editor; my street team; my dear friends; and my husband for his support and patience . . . and for doing the laundry.

This book is dedicated to the memory of Kostbar Vom Dreiländereck.

Tommy Blade leaned his head back onto the leather upholstered seat of the stretch limousine with a contented smile.  Angel Garcia sat to his right.  Jessi Blade sat to his left.  Each of them rested a hand on his inner thigh, and he draped his arms around their shoulders.  It didn’t matter that they were alone in the spacious luxury vehicle with room to hold a dozen passengers.  There wasn’t a sliver of space between them.  That’s exactly the way Tommy liked it.  Whether they were sitting on the couch or in bed together, he wanted to feel the warmth of their bodies next to him.

The flashy limo and the expensive champagne were both at Angel’s insistence.  He was the extravagant one.  Angel never settled for mediocrity, and his indulgence for the finer things in life reflected his generosity.

Tommy was more modest.  A town car would have sufficed, but the smile that had lit up Jessi’s face at the mention of the lavish means of transportation diffused any argument Tommy may have presented.  She deserved every luxury life had to offer.

Maybe the indulgence of the limo and champagne were warranted.  They just returned from their first national tour to the news that Immortal Angel’s debut studio album went platinum.  It wasn’t long ago that the band had played weekly gigs at local clubs in Williamsburg, Brooklyn, with fame and a record deal a mere dream hovering on the horizon.  It was going to be strange to be separated from Damien Diamond and Jimmy Wilder, the two other members of Immortal Angel, now that the tour was over.  Jessi and Alyssa, Damien’s wife, had become best friends along the way.  They weren’t just bandmates; they were a family.

Immortal Angel’s big break came when they headlined the America Rocks festival and were discovered by the head of Falcon Records, one of the largest record labels in the country.  Unbeknownst to anyone, two super fans, Audra and Kira, were the record mogul’s daughters and had a hand in introducing the band’s music to their father.  The band barely had time to acknowledge their success before they had been whisked off on a national tour, and now talks of a world tour were underway.

Tommy gazed at the familiar landscape as the limousine turned off of the Nassau Expressway.  He lowered the window to allow the cool fall breeze into the car, and the scent of the ocean air called him home.  Minutes later, the car pulled into the private driveway of their five-bedroom home.

The majestic house reigned over the Atlantic Ocean.  It had been their first extravagant purchase, influenced by Angel’s persuasion, shortly after they had signed a record deal.  It was a big decision and Tommy had worried about taking on the financial burden so early in their success, but he was easily coerced by Jessi.  He never could say no to her.  She had sacrificed everything in order to support his career choice as a musician, including her career as a fashion designer. She deserved the world and so much more, and he planned on giving it to her.

Angel opened the car door, stepped onto the asphalt drive and offered his hand to Tommy.  “We’re home, my prince.”

The chauffeur opened the door for Jessi, and she slowly walked around the car to join Tommy and Angel.  Her hair was a few inches longer than when they started the tour a few months ago, and a soft breeze blew it off her shoulders.  The sun’s reflection glistened off her bright pink hair, casting a subtle halo around her face.  She was beautiful.

Tommy extended his arm toward her, and she took his hand. The three of them stood at the end of the walkway and shared a smile as they gazed at the massive front entry doors to their home.

The enormity of the house hit Tommy as soon as they crossed the threshold.  It seemed larger and statelier than he remembered.  The house had been cleaned and aired out yesterday, so a light floral scent greeted them upon their entrance.

Jessi bubbled with laughter and twirled in a circle.  “I’ve missed this place!”

Angel took her in his arms and danced her into the living room while he sang a verse from Mötley Crüe’s
Home Sweet Home
.  The acoustics of the cathedral ceiling amplified the clarity of his perfectly-pitched voice.

Tommy watched the two people he loved most in the world laughing in each other’s arms, and it brought a fullness to his heart.

“Come dance with us!”  Jessi called to him over Angel’s shoulder.

Tommy was no dancer.  He jumped about on stage and whipped his hair around like a death metal god.  Even though he played punk rock now, hard rock was still in his blood, and he could never leave it behind, but that was as close to dancing as he came.  He was content to watch Jessi and Angel, and replied with a modest shake of his head.

They both scoffed at him.  They were so much alike, yet so different.

Angel waltzed Jessi toward him, and they pulled him to the center of the living room.  They made an awkward triangle as they attempted to slow dance to Angel’s soft rendition of the Mötley Crüe ballad.

Tommy’s hand slid down Angel’s back and over his butt.  “Can’t wait to christen this place, huh?”

Angel’s provocative laughter echoed back.  “As much as I’d love to ravage your body, mi amor, I was actually talking about the comfort of just lying down in our bed again.”

The little Spanish nickname, which meant “my love”, always made Tommy’s heart soften.  The mention of their over-sized custom-made bed, after being crammed together in the back bedroom of the tour bus, sounded like paradise.  Tommy galloped up the stairs two at a time. Jessi and Angel ensued, their laughter trailing behind him.

Angel raced down the long foyer, past Tommy, and dove into the bed, boots and all.  Jessi followed, hugged a pillow to her chest and rocked it in her arms.  Tommy smiled at their playfulness as he stepped onto the leather bench located at the footboard and climbed into the center of the bed.  It was like falling into a cloud as the soft folds of the billowy down comforter encapsulated his hands and knees.  The pillow cradled his head, and all the breath vacated his lungs as he let out a long drawn out sigh.  He spread his arms and legs and languished in the extra room that the grand bed afforded him.  The weariness of traveling on the road left his body and relaxation and serenity overtook him.  He wasn’t used to the ample space on either side of him, and he didn’t like it.

Angel’s eyes were closed and his hands were behind his head.  He had the most extraordinary and blissful smile on his face that made Tommy resist disturbing him.  Tommy admired Angel’s lavish, dark lashes that hid his soulful, ebony eyes – eyes that overflowed with compassion, patience and understanding.  Their deep pigment accentuated Angel’s black hair and perfectly tanned skin.  It was always warm to the touch from the passion and fire that burned deep inside him.

Tommy never imagined that Angel would change his life on so many levels.  They shared friendship, success and liberation.  Angel gave him the courage to live freely outside the boundaries of society’s conventional standards.  It was a debt that could never be repaid and strengthened the bond that they shared.

Tommy turned his head in Jessi’s direction.  She still coddled the pillow in her arms and wore a smile that mimicked Angel’s.  She owned the other half of Tommy’s heart.  Her selfless devotion and loyalty were unsurpassed.  If it weren’t for her steadfast love and support, he wouldn’t have made it through the toughest times in his life.  He owed her everything, and he never took her love for granted.  There weren’t enough ways in the world for him to show her how much he loved and appreciated her.

Jessi let out a small giggle, rolled toward him and snuggled up to his chest.  The movement of the bed disturbed Angel’s tranquility.  He cuddled closer and buried his face into Tommy’s other shoulder.  Tommy wrapped his arms around them both and held them in a tight embrace.  This was more like it.  He didn’t need the luxury of a spacious over-sized bed.  He wanted to be sandwiched between the two loves of his life.