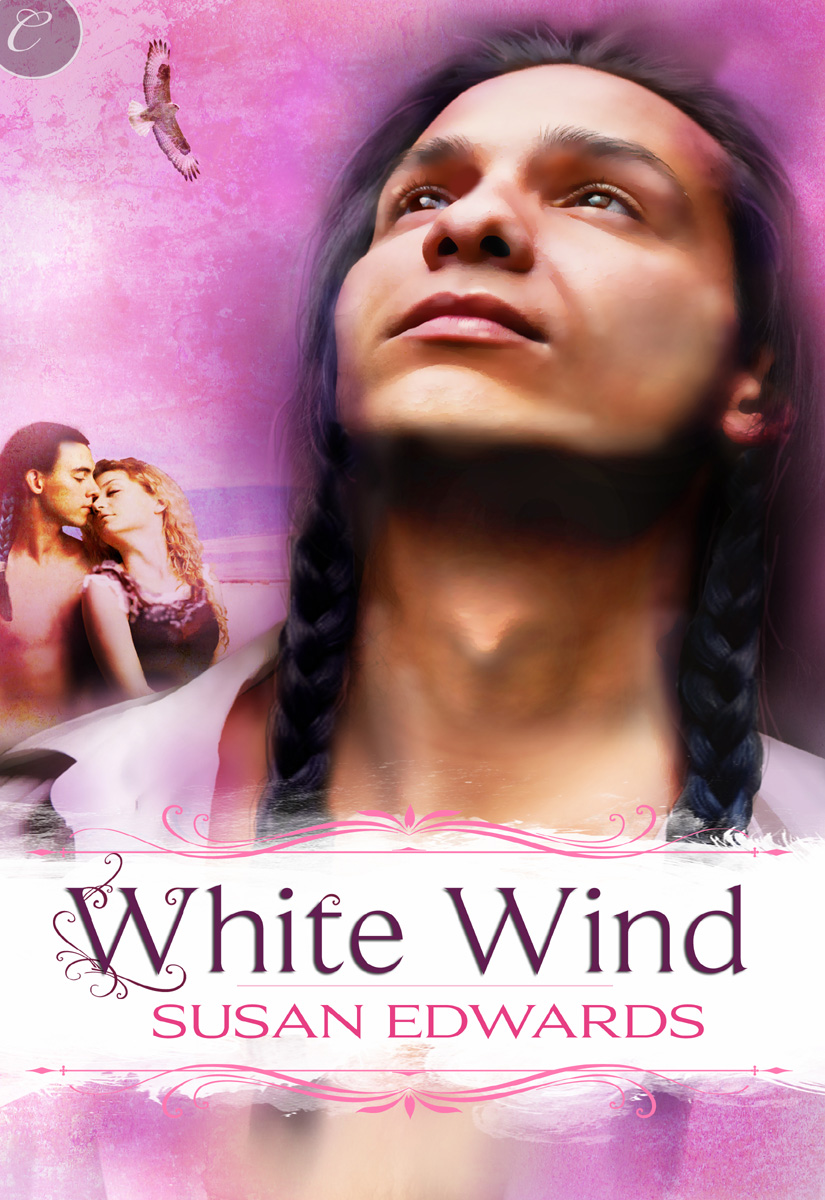 Alone in the world since the death of the man who raised her, Sarah Cartier is forced to flee her home to escape her abusive guardian. No sooner does she ride off into the untamed wilderness than she is swept away by Golden Eagle, the Sioux brave who saved her life once before. Insisting that Sarah belongs to him, Golden Eagle brings her to his village to learn the ways of his people. Her fantasies becoming reality, Sarah is a willing captive—but she fears the danger she'll bring when her guardian finds her.

The blue-eyed beauty has haunted his dreams ever since their first encounter. Now Golden Eagle is determined to claim her as his own. As future chief, Golden Eagle is betrothed to the daughter of another tribe. Consumed by passion for Sarah, he knows he will be forced to choose between love and duty…

I am so excited to see my White Series available in digital format and once again available to you, my readers. This series is so close to my heart—each character became my brother, sister, best friend, etc., and to see them republished makes it seem like a long-awaited family reunion. I can’t wait to become reacquainted with each character! Even the villains, for there is nothing like seeing justice served.

I started the first book,
White Wind,
way back in the ’80s. These two characters just popped into my head one day. I met them at a stream in the wilderness where my honorable (and very virile) hero, Golden Eagle, was determined to rescue a very stubborn heroine named Sarah. It just seemed as though the action stopped as they turned to me and said, “Well? What now?”

Huh? Did they think I was a writer? Not me. Never did any writing at all and had never had any desire to do so. Well, Sarah and Golden Eagle just shook their heads and let me know that despite never having written before, it didn’t matter because I was a storyteller! A vivid imagination, a love of romance and the Native American historical genre were all that were required. Okay, not quite but I got the message.

So I thought, why not? I could write a nice scene or two. Or three. Hey, how about even just a love scene in this wonderful setting that I could see so clearly in my mind? But then I ran into the first problem. What had brought my two willful characters to this stream at the same time? What connected them? Why would this mighty warrior want to claim this white girl? What made him fall in love with her and risk everything for her?

I found that I couldn’t go on until I had answers and that meant, yep, I had to start at the beginning. I learned who they were, what their problems were, and when we once again met at that stream in the wilderness, I just sat back and gave directions, and this time, my characters knew their lines and away we went!

And that, dear readers, was how my writing career began. Once I started, I could not stop. I loved writing about this family. Sarah and Golden Eagle had four children and it just seemed natural to continue the series. I had so many letters begging and, yes, even demanding Jeremy and White Dove’s story in
White Dove.
And honestly, I was right there with each and every reader, for that was one story that just called to me. So from two people, who met by chance, eleven books were born.

Over the years, I valued each and every reader comment: from the mother who read the books to her dying daughter, to the lonely women who found companionship, and to women who appreciated the bravery and willingness of the heroines and heroes to do whatever it took to overcome adversity.

Each of the White books has a story that means something to me. Jessie in
White Wolf
is a lot like I was in my youth. I couldn’t accept “no” back then without a good reason, always looking for a chance to rebel

. I could go on and on but then I’d be writing a book instead of a letter!

Just writing this letter makes me all teary and homesick, but just as these books will be available once more to my readers, I will become reacquainted with each book and each character. Thinking of reunions, I might just have to plan a White reunion! But for now, I am just so grateful to Carina Press and my editor, Angela James, for once again making this series available.

This book is dedicated to a young writer I’m very proud of, my daughter Deanna. And my husband Lynn and son Brandon, who are the warriors in the family. Without your love, support, sacrifices and understanding, my dream of becoming a writer would not have come true.

Friends are the world’s treasures. Thanks, Esther, Leslie and Cindy, for all the wonderful get-togethers—yesterday, today and tomorrow.

A special from-the-bottom-of-my-heart thank-you to Carole Davis, teacher and listener extraordinaire, for her many words of encouragement. Without you, the Wednesday Writers’ Society would not exist. And to the members of the WWS past and present, I deeply appreciate your time and invaluable input along with the humor that makes each Wednesday a bright spot in my week.

perched high on a mountain,

lifting high into the air,

pillowed by wisps of white,

the eagle and the wind,

The coyote’s howl broke the predawn stillness that had startled Emily awake moments ago. Something was wrong. Terribly wrong. It was dark, the moon hidden behind a cover of gray clouds. Seeking warmth and reassurance, the terrified girl had turned to her companion.

But he was gone, leaving only a cold empty spot where she’d fallen asleep wrapped snugly in his arms. She rose to her knees and peered into the darkness.

Suddenly a small ray of light broke through the blanket of clouds and she spotted a familiar figure moving farther into the gray shadows.

“Wait!”
she cried. Jumping to her feet, heedless of the rocks and branches stabbing the bare soles, she stumbled after the departing warrior.

Emily grabbed his arm, dimly aware of the weapons slung across his shoulders and animal-skin pouches of personal items hanging from a throng around his waist.

His nostrils flared with emotion. Eyes as brown as earth refused to meet her questioning gaze.

She stepped close and found herself caught by strong muscular arms and held against his bronzed chest. She threw her arms around his neck and clung fiercely, her head burrowing under his chin.

Rough hands covered hers, forcing her arms down to her sides. Strong hands traveled up her bare arms and feathered over her shoulders to frame her small oval face.

Emily closed her eyes as his head lowered. His lips were firm and warm, yet she sensed his desperation as he gently led her back to the spot where they’d spent the night.

She found herself sitting on a fallen pine tree watching the warrior bend over to pick up a water pouch made from the stomach lining of a buffalo and a bulging parfleche filled with meat, berries and greens. He held them out to her.

Emily took the precious pouches that she’d refilled just yesterday and laid them in her lap, wondering why he was preparing to leave so early this day.

He held out a wooden object. Reaching for it, Emily twisted sideways on the decaying log to let beams of moonlight fall on his offering.

A thick piece of bark formed the top of the crudely carved box. Lifting it, she peered inside. Soft brown rabbit fur lined the interior. Curled on the silky fur lay a necklace.

Emily lifted it out and held it up. She gasped at the beauty of the rabbit claws, feathers and even a prized eagle claw strung on a learner thong. She was honored. But as she turned, her cry of pleasure died. She scanned the area but she was alone.

Looking at the gifts, one dangling from the tips of her fingers, the other resting on her palm, she knew she would not find him this time. He’d said goodbye.

Tears slid from her watery blue eyes, spiking long blond lashes as they pooled and flowed in rivulets down smooth ivory skin.

Her head moved slowly from side to side as she refused to believe her protector, friend and lover had disappeared behind nature’s wall of greenery.

High overhead, the stillness was broken as birds chirped and fluttered, waking to greet the light of a new day.

Emily heard none of it. She sat perfectly still. This couldn’t be happening! Hadn’t she suffered already? Hadn’t losing her family in that gruesome massacre been enough?

A rustling from the bushes behind Emily caused her to jump off the log, the precious water pouch falling to the ground, creating a puddle at her feet. Her heart raced. She clutched his gift to her chest. Rounding the large green bush, she scanned the area, sure that he’d come back.

Instead a doe, startled by her sudden presence, flicked her white tail and bounded into the concealing darkness of the woods.

Emily stood still, shoulders slumping in despair, unsure of what to do or where to go. Drawn to the pile of gathered leaves topped with furs, mostly rabbit, she fell to her knees.

The sharp sting of truth hit her. She had been abandoned. What had she done wrong? Had she displeased him? Why had he left? Panic overcame numbness and disbelief.

Fingers with ragged nails covered trembling lips in an effort to choke the screams that rose from deep within and clawed at the back of her throat for release.

“No!” Over and over she screamed, until her voice grew hoarse, refusing to believe that she was once again alone in a harsh, untamed land.