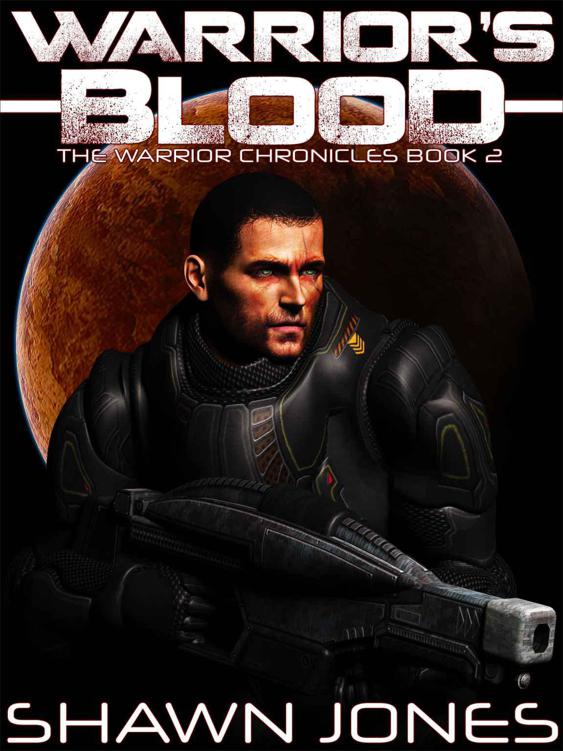 and they were lousy,

And I loved them.

“Well Kay, what do you think?” the tall man with the scar asked his eleventh great granddaughter. Cort Addison was quite different from the woman he was speaking to. He was nearly two meters tall. She too was tall, but that’s where the similarity ended. He was nearly 260 pounds, whereas she weighed more than a hundred pounds less. He was a thick, muscular man, and she was lithe, almost elvish. In Cort’s time, he would have said she needed to ‘become intimate with a cheeseburger or two’. But now, with the nano-synthetics, all humans remained thin. The synthetics helped human bodies to process food more efficiently. Given to children at birth, they regulated everything from metabolism to blood pressure.

Cort had synthetics too, but not like those of the rest of humanity. His were a new kind, developed by his granddaughter to give him some, though not all of the benefits afforded by the metal based nano-synthetics. Bio-synthetics were not metal based. They healed injuries faster than their counterparts, but took longer to reproduce and consumed more energy. On the upside, because his
bio
-synthetics were not metal based, he was not susceptible to most modern weapons, which targeted the metallic synthetics.

Kay also had flawless olive-brown skin. Cort’s was anything but, with a myriad of scars, from a small burn on his hip to the long scar transecting the left side of his face down to his chest. Modern humans had no body hair other than on their heads and pubic hair. Cort had a light beard and body hair on his arms and legs.

“I think it’s perfect. We have plenty of room. We’ll never fill it all. Even if the rest of the family joins us here as you hope, we have room for thousands. I don’t know why you insist on so much security though. The nearest person is nearly eight thousand kilometers away.”

“Kay, I would rather have it and not need it, than need it and not have it. Especially with me going to get Rand. Not only will you be alone, but once I get him, they will come for us.”

“I’m hardly alone, Cort. Sköll is perfectly capable of defending me.” The big gray wolf heard his name and walked to Kay’s side. Once Cort’s only companion, clearly he was now hers. And Cort wouldn’t have it any other way. “He killed as many of the security people that night as you did.”

Cort had come three hundred and four years into the future only to find that all canine species had been wiped out by a mutated flu strain. When the ‘top-siders’, as he called them, saw Sköll, the security team immediately tried to take him from Cort. They were all dead, several with their throats torn out. But two members of the team who made first contact with Cort had survived. Kay’s daughter Clare Gaines, Cort’s twelfth great-granddaughter, and John Wills, an archaeologist whose fascination with Cort and the things in his cavern superseded all other considerations.

“I know that, but if they come in numbers, you have to fight too. Can you do that?” Cort asked.

“After what that man tried to do to me, and what they did to Rand for helping me, yes. I don’t want a disruptor, though. I want one of your guns,” Kay said as she remembered the man who had sent her into a near catatonic state for so long. He had tried to coercively mate with her. When her son Rand walked in, Rand ended up killing the man. It should have been an open and shut case of defending his mother, but political influence ended with Kay’s son being banished to the Mars colony at Oxia Palus. It should have been a new start for him, but upon arrival, he was immediately imprisoned by the colony governor, a man related to Rand’s victim.

“I’m not sure that’s a good idea. If you shot in the wrong direction, you could compromise the atmospheric integrity. That could lead to a lot of problems. Not to mention, if they took the weapon from you, it would be problematic on a lot of levels, Kay,” Cort responded.

“Then teach me how to make sure that doesn’t happen.”

“How about I start training you a few hours a day, then we can reassess it,” Cort offered.

“The troop ship will be here in twenty-one days. I’m still not sure we’re going to need them,” Dave Keen said. “You may have used a lot of favors up on a bad hunch, Steve.”

“I don’t think so. Thirty people we know are loyal to us is never a bad bet. The second colony being occupied changes things. We aren’t the only influential people here, now. Dar Sike’s people have a lot of clout on Earth.

Two weeks later, Kay shot Cort twice in the chest and once in the groin with a .45 caliber Colt.

“What was the last one for?” Cort asked as he rubbed his chest. His FALCON suit had dissipated the impact of all three rounds, but he still felt them. The black carbon nanotube suit didn’t even show the impact sites. Picking up the distorted rounds from the floor, he took the moment to rub the other impact site as well.
What the hell have I done giving her a weapon?

“To remind you that I know what’s at stake.” Kay cleared the weapon and reloaded the rounds missing from the clip. “Now when are you going to get my boy?”

“There’s still the matter of their disruptors. My suits won’t fit you, and it will take a while to make one that does. I’m not even sure I can.”

“Cort, how is it that I just shot you in the dick and you still don’t know me?” Kay asked.

“I have recognized the weakness in the old style synthetics since the first day I met you. And you weren’t the first test subject for your bio-synthetics. I was. I reprogrammed mine to stop replicating, then slowly filtered them out as I replaced them with the kind I made for you.” She saw the surprise on his face. “Their disruptors won’t do, what is the phrase? They won’t do shit to me. So my only worry is them having a prowler on hand when they show up, and that’s not likely. There’s going to be some risk. And you have minimized it a lot by teaching me how to use your weapons. Between this sidearm and an AR, they won’t take me alive.”

“I don’t want them to take you at all. But you made your point. No risk, no gain.” He thought about the synthetics again. “I’ll say this for you, you’re one tough broad. Okay, let’s get the rest of the sensors up and get my transport online. Then you and Sköll can have a few days to yourselves.”

The Aeolis site was originally a backup site for the colony at Oxia Palus. If the main colony had a catastrophic event or was otherwise unusable, the Aeolis site would serve as a bug-out location to rebuild from. As such, it wasn’t set up quite the same as the main colony. It was much more ‘survival oriented’ than the other site. Not spartan by any means, but much more utilitarian.

Once Cort decided to leave Earth, the sizeable Addison Trust, a fund started by Cort’s family in the twenty-first century to help prepare for his arrival in the twenty-fourth, acquired the back-up site from the Atlantic Alliance, which governed the Mars colony. Kay’s father Dar, back on Earth, had been sending them everything he could think of since then. The best part was they didn’t even have to unpack. Each transport vessel was designed to land and be permanently connected to the existing structure like a train car. Once in place, each one became a part of the colony itself. Once squares were built from the arriving freighters, Formvar domes could be built over the courtyards to create outdoor spaces. If Kay or Cort saw a specific need, they would request it from Clare or Dar, and it would be on the next launch.

Such was the Mars Environment Reconnaissance Vehicle included in the shipment that had arrived that morning. The M
ERV was able to cruise over ten thousand kilometers on a single charge. At least this one was. Dar knew it was unlikely the colony at Oxia Palus was going to part with anything once Cort made his presence known, so he doubled the battery power on the vehicle. With the given terrain, and utilizing auto-pilot, it would take Cort almost six days to arrive at his destination. But the vehicle was perfect for his mission. Designed for four passengers, it had plenty of room for the gear he would need to rescue Rand, as well as any other contingencies he could think of. The size of a pickup truck from his own time, Cort felt like he was driving a pressurized four wheeler. But on another planet. Without roads. As soon as they had landed and set up secure communications with Earth, Cort told Dar and Kay what he intended to do. They changed out two cargo loads and sent the modified MERV and other gear he might need.

Cort parked the MERV behind a low ridge to the north of the Colony. Suiting up in one of his two CONDORs, he checked his weaponry and began to scout the perimeter. He had wanted the HAWC suit, but its sheer size would have made both transport and use a problem. At about ten meters tall, the Heavy Armor Warfare Component suit was just too big for the corridors in some parts of the colony. The COmbat Nanotube Defense OpeRations suit wasn’t armed with a railgun like its big brother, but Cort had hand weapons that should suffice for an extraction like he had planned. At just larger than a standard atmospheric suit, Cort was still able to operate the MERV reasonably well.

Originally, Cort had intended to just break out the back wall of the detention center where Rand was held since it was on the outer edge of the structure, but Kay reminded him that Mars’ atmosphere would kill Rand in seconds. That meant Cort had to go in through the front door, so to speak. Once Rand had a pressure suit on, Cort could carry him away from the colony to the MERV. He walked around the southern and western edge of the colony structure and placed several small charges according to the diagrams he had of the facility. Once in place at the airlock nearest the cells he believed Rand to be held in, he detonated them.

“What the hell?” Chief Rhodes said as he heard multiple alarms coming from the environmental control computers. “Something is glitching. It has to be. Every external sensor in sector three just registered the exact same breaches in the exact same types of panels. It’s got to be a glitch. Kill the alarms and get a tech to the first node they all share.”

“Yes, sir. Should I notify Governor Taps?” his subordinate asked.

“No. Clearly they aren’t breaches. It’s too perfect. Just get the tech there ASAP. What’s that?” Rhodes asked about a separate alarm that sounded.

Courage: Overcoming Fear and Igniting Self-Confidence by Debbie Ford
The Inheritance by Simon Tolkien
Antony and Cleopatra by Colleen McCullough
The English Heiress by Roberta Gellis
The Shadow at the Gate by Christopher Bunn
The Zombie Room by R. D. Ronald
Super Sad True Love Story by Gary Shteyngart
Retreat From Love by Samantha Kane
The Silences of Home by Caitlin Sweet
Learning To Fly (Fated Love Book 1) by Lauren Firminger