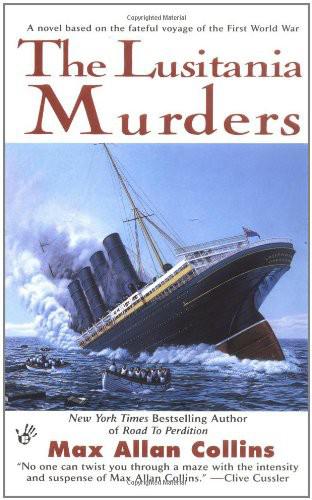 In respectful memory of the World Trade Center victims, who followed in the tragic footsteps of the
Lusitania
passengers.

Though this work is fanciful, an underpinning of history supports the events depicted in these pages. The author intends no disrespect for the real people who inspired the characterizations herein, nor to take lightly the disaster that took so many lives, and marked the first instance in modern warfare where the line between combatant and noncombatant was tragically blurred.

“There’s been some cover-up about the
Lusitania
. . .
it was really murder.”

“There are few punishments too severe for a popular novel writer.”

“So long as governments set the example of killing their enemies,
private citizens will occasionally kill theirs.”

Travellers intending to embark on the Atlantic voyage are reminded that a state of war exists between Germany and her allies and Great Britain and her allies; that the zone of war includes the waters adjacent to the British Isles; that, in accordance with formal notice given by the Imperial German Government, vessels flying the flag of Great Britain, or any of her allies, are liable to destruction in those waters and that travellers sailing in the war zone on ships of Great Britain or her allies to do so at their own risk.

Using both research and literary license, the following narrative was fleshed out from a fragment that was among the few existing papers of Willard Huntington Wright (1887–1939). Wright—a trailblazing art critic and controversial editor of the avant-garde magazine
The Smart Set
—is better known under his pseudonym, S.S. Van Dine.

Wright had long been a caustic critic of popular fiction, but—after gaining an affection for puzzle-oriented mysteries, while recovering from a nervous breakdown—turned to mystery writing both as therapy and as a means to climb out of a personal and financial hole. For some time, he guarded his identity behind the colorful Van Dine pseudonym; but when the Philo Vance mysteries became wildly popular, he emerged to relish and even exploit his celebrity, though he probably never completely divorced himself from the guilt attached to abandoning artistic aspirations for the best-seller list.

Though S.S. Van Dine is little read today, Wright and his fictional detective, Philo Vance, are remembered as, first, the sensational mystery genre success of the Jazz Age, and, second, an enormous influence on the American mystery (the Ellery Queen novels began as an outright Philo Vance/S.S. Van Dine imitation).

Because I had written about the experiences of mystery writers Jacques Futrelle in
The Titanic Murders
(1999) and Leslie Charteris in
The Hindenberg Murders
(2000), I was approached by a rare-book dealer with the manuscript that provided the basis for this novel.

Despite the unimpeachable integrity of this particular bookseller (thank you, Otto), I had my doubts about the authenticity of the manuscript. According to John Loughery’s fine biography of Wright,
Alias S.S. Van Dine
(1992), as his health failed, Wright “began his remarkably thorough and systematic attempt to thwart any future interest in his life story by destroying files of correspondence and early unfinished manuscripts.”

Further, none of the references on the sinking of the
Lusitania
contain any mention of Wright having been on the great ship’s final voyage—though Loughery indicates Wright travelled on the
Lusitania
earlier in 1915—either under his own name, or—as the fragment suggests—under the name S.S. Van Dine.

There is, however, evidence to suggest otherwise; that his fragmented manuscript was a memoir, not a mystery. Though Wright travels as “S.S. Van Dine,” he does not disguise his identity from the reader, nor does he pretend to be the Watson-like lawyer who, as Van Dine, “writes” the Philo Vance mysteries. Nor does Philo Vance himself appear, although a fascinating prototype for Vance does.

In addition, my research indicates that Wright’s description of the final voyage of the
Lusitania
is quite accurate in its facts, even to its details—and Wright did not have access to the in-depth book-length treatments of the disaster that have appeared in recent decades.

How much of the narrative that follows derives from the S.S. Van Dine fragment, and how much from my own imagination, I will leave up to my . . . our . . . readers.
The Lusitania Murders
is offered only as an entertainment, a testament to a forgotten master of the mystery genre, and a remembrance of the victims of a tragedy whose ramifications far outreached those of the
Titanic
itself.

My friend H.L. Mencken—at least, from time to time we were friends—once characterized me as the “biggest liar in Christendom.” So I would take no offense if the gentle reader (as Elbert Hubbard would say) discounted the tale I’m about to tell, as typical S.S. Van Dine self-aggrandizement.

On the other hand, over the years, the question I’ve most often been asked is how I came up with my distinctive pseudonym. The “Van Dine,” I have explained, is simple: It is an elegant representation of my occasional desire to eat, a luxury that requires earning the more than occasional dollar. Some have speculated that the “S.S.” represented the traditional abbreviation of “steamship,” which is in part true, and relates to this tale, taking place as it does on one of the most famous—and infamous—ocean liners of the twentieth century.

Like most artists, however, I have an irresistible inclination toward resonance—double meanings and second
levels. And while it is true that I regard my mystery novels as voyages of entertainment, “vacation reading” that encourages my patrons to board the
S.S. Van Dine
for a good trip, that “S.S.” did indeed have a secondary shade of significance, which at the time seemed clever and now merely strikes me as (I shudder to admit) cute.

At the time of my ill-fated voyage on the
Lusitania,
I was in no position to travel first class; frankly, managing the fare for second class would have been a trial, and even steerage a stretch. In March of 1914, a year and two months prior, I had suffered through the indignities of second class; the food, accommodations and company were of a different order than my trip to Europe the previous spring, as editor of
The Smart Set
.

My brother Stanton—the eminent Modernist painter who pioneered the Synchromist movement—was living in London in early 1915. I had spent almost a year with Stanton in Europe—first in Paris, then London—before returning on the
Olympia
in March, leaving him to stubbornly serve his muse.

Our sojourn in Europe had been well-intentioned—Stanton sought a suitably sympathetic climate in which to paint, I to pursue writing (both criticism and fiction)—but in retrospect our timing could have been better. A continent withered by war and gripped by nationalist hysteria was hardly conducive to creativity.

In April of 1915 I began to cast about for a way to return to Europe, and convince Stanton to return stateside. But the condition of my finances—and, frankly, of my health—was less than ideal.

In some respects, though, my life was on the upswing. I had received a modest advance for my book-in-progress,
Modern Painting: Its Tendency and Meaning
, and fees for
essays and reviews for various publications,
Forum
and
International Studio
among them, allowed me to move from my dismal flat in the Bronx to a two-room apartment over a store on Lexington Avenue in Manhattan. Disagreeably dilapidated though the building might be, the thirty-five dollars a month rent was friendly enough.

In addition, after a debilitating illness,
*
my health had recently improved. For months I had been weak and on edge, filled with hallucinations and phobias, and would surely have checked myself into a hospital if my monetary status had allowed. Instead, I ministered to myself in a singularly unromantic garret—a boardinghouse room in the Bronx—until I looked healthier and less drawn, and could come out among the civilized once again.

Perhaps a certain illness-induced gauntness emphasized my already Mephistophelian features—the receding nature of a reddish-brown hairline emphasized my intellectual stance, even if the former aspect was underscored by the devilish glint in my blue eyes and the spade-shaped if well-trimmed full beard, the upturned corners of my mustache perhaps hinting at my pro-German leanings.

Well over a decade later, my Germanophile’s view might seem harmless enough; on the eve of what would be the Great War, I suffered numerous negative repercussions, due to what I admit was an intellectual’s naivete. It seemed to me that reasonable men could tell the
difference between Wagner and Kaiser Bill; that a mind fond of Mahler, Strauss, Goethe and Mann did not signify an insurgent heart.

This pro-German stance—added to my reputation as a prolific if outspoken columnist, with the boost of an H.L. Mencken recommendation—had brought me to this table. Of course it could also be said that Gavrillo Princzip made inevitable this appointment, when—on June 28, 1914, on a Sarajevo, Serbia, street—he shot and killed the Archduke Franz Ferdinand.

As a bonus, Princzip had also killed the archduke’s wife, and this rash act (the archduke’s assassination, that is, not Mrs. Archduke’s) served to spark a war involving Russia, Germany, Austria-Hungary, France and Great Britain. Ten million lives would be lost, twenty million souls would be wounded and twenty-five million tons of shipping would be sunk.

But the war was three thousand miles away, on this warm Friday evening in Manhattan in late April of 1915; the three of us were in a bustling Bavarian restaurant near Union Square, on Fourteenth Street. Perhaps the city’s best-known German restaurant, Luchow’s—with its dark woodwork and baroque dining rooms with their elaborate gilt-framed landscape oils and solemn looming stags’ heads—found its popularity unswayed by a growing anti-German sentiment, and remained a favorite haunt of writers, musicians and theater folk. Tonight I was dining at the invitation of publishing legend Samuel Sidney McClure and one of his associates, Edward Rumely.

We were seated at a table beneath the Wagner murals in the Niebelungen Room; I had my back to the eight-piece orchestra, which had been brought to this country by Victor Herbert, whose mediocre music they performed
with all the lack of panache it deserved. Fortunately the din of dinner conversation all but drowned out the orchestra’s brainlessly lilting aural wallpaper. We were drinking beer from steins, having completed our prime beef and red cabbage.

McClure was a stern-looking character, with a short blunt nose and a carelessly trimmed white mustache, his blue eyes piercing in an almond-oval face topped with a shock of gray hair; a thought-gouged crease between his eyes suggested eternal skepticism. His brown vested suit with darker brown bow tie might have been the attire of a chief clerk, not the man who invented newspaper syndication, and whose
McClure’s Magazine
had taken on corruption in corporations and city government.

After all, the term “muckraker” had been coined to describe McClure’s efforts, which included publishing Lincoln Steffan’s “Shame of Our Cities” series and blistering exposés on Standard Oil and the United Mine Workers.

The third and final member of our little all-male dinner party was a thickset fellow in his mid-thirties who looked rather like a bulldog in a three-piece suit, a navy suit as rumpled as its wearer’s homely face. This was Edward Rumely, the owner and publisher of
The New York Evening Mail,
a recent acquisition of this scion of the Rumely farm implement manufacturing clan. The family wealth may have derived from diesel farm equipment, but Edward Rumely had other ideas about making his own fortune . . . in publishing.

“I understand congratulations are in order,” I said to McClure, and then lifted my stein in an informal toast toward the vested bulldog. “To both of you—for your new position, Mr. McClure, and for landing such a prestigious editor for the
News,
Mr. Rumely.”