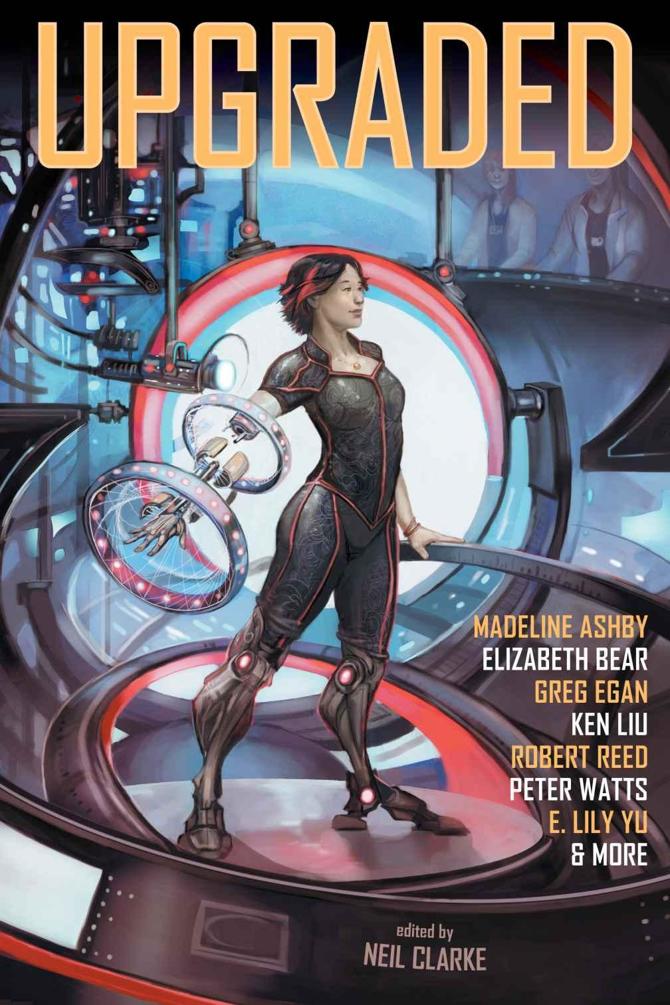 For Arachne Jericho
& the doctors that rebuilt me.

No portion of this book may be reproduced by any means, mechanical, electronic, cybernetic, or otherwise, without first obtaining the permission of the copyright holder.

All stories are copyrighted to their respective authors, and used here with their permission.

The Sarcophagus
by Robert Reed

Oil of Angels
by Chen Qiufan

What I’ve Seen With Your Eyes
by Jason K. Chapman

No Place to Dream, but a Place to Die
by Elizabeth Bear

Come From Away
by Madeline Ashby

Taking the Ghost
by A.C. Wise

The Regular
by Ken Liu

Memories and Wire
by Mari Ness

Mercury in Retrograde
by Erin Hoffman

Coastlines of the Stars
by Alex Dally MacFarlane

The Cumulative Effects of Light Over Time
by E. Catherine Tobler

I remember when I saw my first cyborg. It was 1974 and I was watching
The Six Million Dollar Man
on channel seven. I was riveted by the continuing story of Steve Austin and his bionic upgrades. It wasn’t long before all the kids were running around in slow-motion saying “dit dit dit dit,” and I was among them. We all dreamed that someday we’d become “Better . . . stronger . . . faster.”

On the other side of the coin, TV has provided us with ample reasons to fear a cyborg future. Among the most popular, we have the Cybermen (
Doctor Who
), the Borg (
Star Trek
), and Darth Vader (
Star Wars
). We must avoid becoming “more man than machine” and resist being upgraded at all costs.

In the 80s, cyberpunks gave us another view of our cyborg future. There was power in having implants, but it was also dark, edgy and dangerous. Imagine a world where new skills or memories could be bought and downloaded or where you could visit with a friend in a virtual reality . . . but cyborgs, like the computers and networks of today, could be also compromised, used, and destroyed by hackers or our even own governments.

Media and literature have provided us a lot to think about. The cyborg has been used to thrill, frighten, inspire, and educate us about just what it is to be human. Since the term was first coined in 1960—by Manfred Clynes and Nathan S. Kline—the science has finally caught up with the theory. There are cyborgs among us, and in 2013, I became one of them.

The genesis of this anthology starts a few months earlier, in July 2012. I was attending a science fiction convention and suddenly felt ill. What I thought was food poisoning would, a few hours later, reveal itself to be a heart attack. Fortunately, we were less than two blocks away from the Lahey Clinic, a well-respected and excellent hospital in Burlington, MA. Many hours later, they would explain to me that I was one of the lucky ones and that I had survived a “widow maker.” They had been able to place two stents in my heart, but it would be weeks before they knew the full extent of the damage. Back at home, months later, my cardiologist made his final assessment of the damage: it was considerable and I was immediately directed to the electro-cardiologist across the street for a consultation. He agreed. The blood flow in my heart was less than half of what it should be and that placed me in a high-risk group. Given my age, they advised that I get a defibrillator and in mid-January 2013, I did.

There isn’t a day that goes by that I don’t notice the box that sits between my ribs and skin. Its wires snake their way through an artery and into my heart, where they are screwed into place. In the event I should need it, that box will notice and send a potentially life-saving jolt of electricity into my heart. I download the data from that box—wirelessly—into another device that shares all the collected data with my doctor. I have a special card that I have to show to hospitals and airport security, and I have to avoid magnetic fields. There’s even a speaker built into this thing. Let me tell you, when a warning tone starts playing from within your chest, it gets your attention. I’ve asked to get a USB port and headphone jack added, but that option is not available or a bit too forward-thinking. Guess I won’t be a data mule anytime soon.

As I recovered from my surgery, I made a passing joke about being a cyborg editor. Did I pick the right field or what? It also occurred to me that while I had edited
Clarkesworld Magazine
for years, I had never edited an original anthology. Why not start with cyborgs? Shouldn’t one of our own be editing that one? It was an idea that just wouldn’t die and thanks to some wonderful people (many of them listed as honorary cyborgs in the appendix of this book) and the power of Kickstarter, I was given the chance. This book makes the best of a bad thing.

When I was a kid, I wondered what ability I’d get. Strength? Super-learning? Better eyesight? It never crossed my mind that my cyborg upgrade would be a failsafe system.

The cyborg future is now. We are among you.

Nissaea-of-the-Slant wasn’t even looking for an eye implant in the mazeway lode when she came across the half-smashed ocular. It was worthless in any case, and she gritted her teeth at her bad luck. A hand was what she needed, and this was her last chance. The sputtering confounders, the only ones she’d been able to afford, would give out sooner or later, and then she wouldn’t be able to hide her illegal implant-mining from the Watch.

She was about to try again to the left when she heard the sound. It was hard to make out. In the city above, she heard the echoes of a distant chant accompanied by drums, undoubtedly temple services. She must have been down here longer than she’d realized. And the damned drums made it harder for her to hear anything else. She straightened and looked around, ready to spring toward the nearest exit at the slightest indication of trouble.

It took only a moment a locate the source of the noise. Crumpled near one of the heaps of partially digested motherboards was a slight figure, smaller even than Nissaea herself. Nissaea’s darkvision (a simple modification based on a sensor patch, not a full ocular replacement) didn’t offer much discrimination. She didn’t want to draw attention from the tunnels by switching on a brighter light source, just in case, but she was still dismayed at herself for not spotting the figure earlier.

I have to get out of here,
Nissaea thought, edging away as quickly as she could without tripping over the wrack of discarded packaging, outcroppings, bent pipes. Just before her circle had cast her out for the circuit-infection that had disabled her hand, she’d heard persistent rumors of a murderer lurking in the mazeways. Not that murder was anything new, especially among the undercircles and those who had no circle at all, but the descriptions of the corpses had been particularly gory and Nissaea preferred not to take chances. She was halfway to the exit from the chamber to the lower mazeways when a new sound stopped her.

“Water,” the figure said softly, in a voice not so much sexless as pure of timbre. It had lifted its head and was watching Nissaea with eyes of indeterminate color.

Nissaea could have kept on going, but the utter hopelessness in its eyes stopped her. The voice’s owner expected her to abandon it. She remembered how the head of her former circle, Addit, had turned his back to her the moment she showed up with the infection. It hadn’t even been worth pleading to buy part of a new hand on credit and pay the rest back later. She wasn’t going to be like Addit. Well, not straightaway.

“How long have you been there?” she demanded in a fierce whisper.

It bowed its head, drew a shuddering breath. “Always,” it said, a questioning lilt to its voice, then: “Always.”

The answer made no sense, but she assumed that it was addled from being trapped down here who knew how long. All at once she made up her mind, and offered it her canteen. It looked at her, awaiting her nod before taking one measured sip, then a second one.

In the meantime, Nissaea took the opportunity to scrutinize the stranger. One of its eyes was artificial and almost seemed to glow faintly in facets, insectine. The other, human eye, set in a face quiltwork-patched together from alternating swatches of metal and skin, was sunken and fever-bright. An extravagant inlaid mark, like a captive prism, decorated one cheek. It was weirdly incongruous beneath the melancholy human eye. And then there were its hands: the left one, although a prosthetic, was very close to human in shape, except for the stubby pearlescent talons, which looked like they might retract. The right arm, worryingly thin, was of flesh, and led down to fingers with bitten nails. The stranger wore a shift too large for it, and no shoes, revealing too human feet with scarred soles.

“Drink,” Nissaea said, realizing it wasn’t going to take any more unless she said to.

It took three more sips, paused, then allowed itself one more. Nissaea found this polite parsimony oddly endearing. Then it said, “Thank you,” and sank partway down with a whispered exhalation.

They were interrupted by a distorted sound from above: rough voices, some buzzing and scarcely human, and the thump of footsteps above the chamber, mediated through layers of honeycombed metal and nestled pipes. Nissaea couldn’t quite make out what the speakers were saying, but she was betting that that was the guttural rhythm of the Watch’s dialect. More to the point, if they were Watch and they could hear the reverberations under their feet, they might figure out there was an illegal dig here. She’d thought that this chamber was some distance from their usual patrol routes, but apparently not.

“I can’t leave you here,” Nissaea returned, although this was patently untrue. Still, she remembered how it had stung when Addit had discarded her, the moment when she’d gone from valued scavenger to unnecessary expense. She could do better than that, be better than that.

“Are they after you?”

It looked confused by the question. “Why would they be after me?”

Hell with it. They shouldn’t linger here any longer. “Come with me,” she said insistently. When it didn’t respond, she tugged hard on its human hand.

The stranger wasn’t completely stupid. It didn’t jerk away from her, or yank itself out of the mess of rough-edged debris, not that it looked like it had much strength for that sort of thing anyway. Instead, as carefully as it could, it worked itself loose from the entanglement of chiaroscuro wires. Its breath hitched when a sharp edge scraped across its ankle, although Nissaea couldn’t help being glad that the segment was flesh, not something that would have made a louder noise.

El renegado by Gene Deweese
Island of Icarus by Christine Danse
Star Style by Sienna Mercer
The Disappearance of Grace by Vincent Zandri
Her Valentine Family by Renee Andrews
In Exile (Archangel Jarahmael and the War to Conquer Heaven, Book III) by John J Higgins
Revealed by Ella Ardent
[When SEALs Come Home 04] - Heated by Anne Marsh
The Devil Colony by James Rollins
Her Highness, the Traitor by Susan Higginbotham