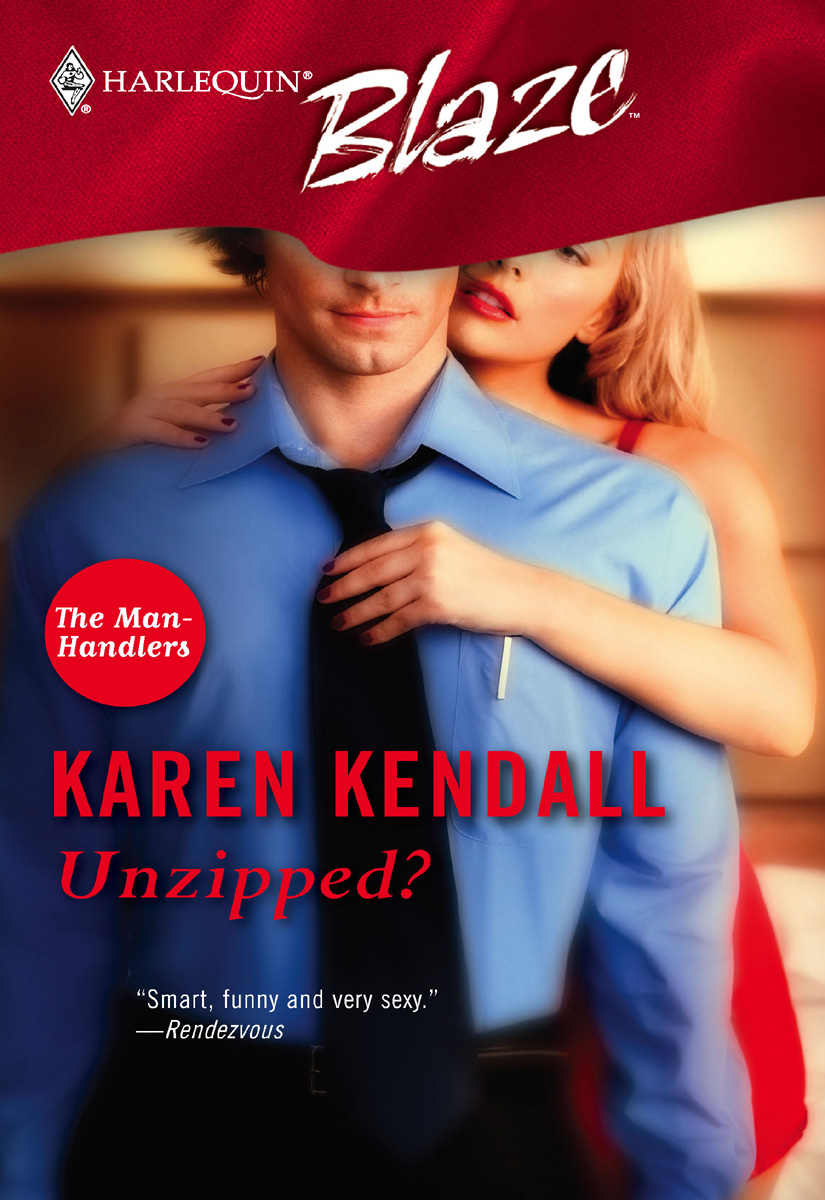 “No! You cannot have my pants,”

Hal protested, determined to make his final stand. Shannon had already decimated his entire wardrobe, and he wouldn’t let her take these with her. “This is my favorite pair of jeans and you’re not getting them off my body.”

Shannon rubbed her hands together evilly. She raised an eyebrow. “What if I made it worth your while?”

“What do you mean by that?”

Was she offering him sex if he took off his pants for her? He grew hard at the thought. “Well, a guy can always fantasize,” he said before he could stop himself.

“So can a girl,” she purred. “But the reality is so much more satisfying, don’t you think?” Then she whipped off her top.

Have you ever despaired over something that your boyfriend was wearing? And worse, you were unable to stop him from
wearing it out of the house?

When you subtly tried to tell him that something else might look better, he just shrugged and said he didn’t care, right? Or when you told him flat out that his clothes would embarrass you, he got mad, and wore them just to spite you.

I have been in this situation many times! And of course it’s led to fantasies of smoking the offending clothing on the barbecue grill, or tossing the guy’s entire wardrobe into the garbage. While I’ve never actually done this, I decided that it was high time I wrote a character who did…and gave her justification for her actions by making them part of her job.

Be sure to look for
Open Invitation?,
the next book in THE MAN-HANDLERS series.

I love to hear from readers, so feel free to contact me at [email protected] or write to me c/o Harlequin Enterprises, Ltd., 225 Duncan Mill Road, Don Mills, Ontario M3B 3K9, Canada.

S
HANNON
S
HANE FIRED
into her office like a bullet and ripped through her appointment book. “Oh, thank God it’s tomorrow, not today.” She fell into her bright yellow leather office chair, her long legs sprawled in front of her.

Shannon turned, pulled aside the blond curtain of hair hanging over her face and rolled her eyes at Jane. “Funny. Not. I meant my appointment with Doris Rangel. I’ve misplaced my Palm Pilot somewhere, and I couldn’t remember. Whew. She’s the new junior senator from Norwich, and we’ve got several wardrobe and media-training sessions set up.”

Jane walked into the common area of Finesse, their business, opened the drawer of the reception desk—a somewhat useless accoutrement since they couldn’t yet afford to hire a receptionist—and pulled out the missing personal organizer.

“Shan, you are no longer allowed to put anything down while you set the office alarm. It never makes it out the door with you, whether it’s sunglasses, keys or a Palm Pilot.”

“Yeah, I know,” Shannon said ruefully. “Give me that, thanks. I need to chain it to my wrist.” She stuck the device on her desk and blew out a breath. “Do we have coffee?”

“Yes. Lilia made some. If you’re nice to her and say please, she might give you a cup.” Adorable, but excruciatingly proper Lilia London was their third business partner in Finesse, a training center for personal and career enhancement.

Jane, benign control freak that she was, excelled at the job of CEO. She also did counseling and employee management consulting. Lilia, their resident Miss Manners, handled business and social etiquette. And Shannon herself was their image consultant and media trainer.

“This one does,” Shannon said firmly. “It’s April,
therefore it’s spring. Pink is perfect for the season. And you can wear all the gray and khaki you want, but I refuse. It’s boring.”

Jane adopted a resigned expression as she looked beyond the tasteful reception area, furnished with antique reproductions, an oriental rug and traditional paintings, and into Shannon’s office. She closed her eyes against the tangerine-colored walls, the movie posters, the strange contemporary art.

Shannon just laughed. “Image, honey. That’s what I do. My image is different from yours.”

“That might be a little too much for the average preppy to swallow,” Shan agreed.

Lilia emerged from the kitchen with two cups of coffee and handed one to Shannon, having to look up as she did so. Five foot one herself, she complained, “I think you grew another inch last night. It’s not fair.”

“Thanks for the java,” Shannon said. “And I keep telling you, being six feet tall is not that wonderful. With a pair of heels, I dwarf most men.”

Lil raised an elegant, dark-winged eyebrow. “But I’d
like
to be worshipped. It must be nice.”

Shannon shook her head and drained a third of her coffee in one gulp. “Stop it. Nobody worships me.”

“Uh-huh.” Jane’s tone was sardonic. “I was out with you last weekend. I saw the men in person—at least four Worshippers From Afar, three Droolers, a
couple of would-be Leg Humpers and one Pathetic Pick-up Liner.”

“Oh, him.” Shan shuddered. “The nice-girl-in-a-place-like-this guy. I didn’t think anybody still dredged
that
line up. Horrific.”

What nobody, including her closest friends, seemed to understand was that it wasn’t enjoyable to be the subject of all that male attention. It was more annoying—and the guys weren’t really interested in who she was, but what she looked like. Some glossy blond American ideal. However, Shannon didn’t say anything. She had learned long ago that most women considered hers high-class worries. Six-foot, one-hundred-twenty-five-pound blondes never inspired much pity. Hatred, yes. Envy, certainly. But sympathy? Out of the question.

She changed the subject, embarrassed. “So I handed out over twenty business cards at the University Women’s Club dinner last night.”

Shannon and Lilia moved into the kitchen as she took the business call. “So how’s your grandma, Lil?”

Her friend sighed. “She’s…putting a brave face on things. Knee replacement surgery is just no fun, any way you look at it. It hurts her a lot. She loves the basket of teas and cookies you brought her, though.”

“She refuses to take the roses out of the china teapot, even though they’re quite wilted at this point. Once I manage to toss them—probably while she’s asleep—she might let me actually make tea in the pot.”

Shannon laughed. “Please forbid her to write me a thank-you note.”

Groan.
“At least we know you come by your manners honestly, Miz Vanderbilt.”

Lilia’s expression came as close to an actual eye roll as she would ever get.

“Give Nana a real hug from me—the boob-squashing, shoulder-to-shoulder affectionate kind, okay? Not one of those air-kiss-to-dry-cheek, flutter-fingers-on-back types.” Shannon mimicked a freeze-dried socialite.

“Yes. Let’s see, I met her through…” She pursed her lips, thinking. “Oh, at the veterinarian’s. She had a cockatiel. I had Pierre, Nana’s poodle, there for his shots. Anyway, we got to talking and I gave her one of your cards. She mentioned a brother who needs help.”

“Yeah. A lot of help, from what she told me—she stopped by yesterday. Said I’d have to call him, since her nagging might not get good results.”

“Yup. Picture me calling. ‘Hello, Mr. Underwood? I hear you’re looking straight off the set of
Planet of the Apes,
honey. Come see me, would ya, dear?’”

“You don’t even know how to spell subtle, darling.” Lil tipped the rest of her coffee into her mouth and moved toward the pot for a refill.

“I don’t want to spell it,” Shannon said. “My business is to teach people how to make a statement. A powerful statement. Subtle doesn’t cut it.”

“Subtle can be powerful,” Lil disagreed.

“Color is confident. Subtle is meek.”

“Why, Lil! You’re arguing. That’s not polite.” Shannon laughed as her friend’s eyes snapped. “Okay, we’ll call it a draw. Anyway, so what would
you
say if you had to contact this Underwood guy?”

“I’d tell him that you met his sister and that she suggested you give him a call to set up an appointment. Straightforward, true, no awkwardness about it.”

Shannon nodded. “Okay. I can do that. I’ll wait a couple of days to see if he gets in touch first, though.
I don’t want to be pushy.” She finished her own coffee and went for a second cup.

Jane, from the doorway, said, “Oh, please don’t do that! You on too much caffeine is scary.”

Shannon put a hand on her hip and grinned wickedly. “Hey, Jane. What happens when a psychologist and a hooker spend the night together?”

“No! Not more shrink jokes…”

“In the morning, each of them says, ‘One hundred and twenty dollars, please.’” She laughed at Jane’s pained expression.

“Hey, what’s the difference between—”

Jane clapped her hands over her ears.

Her friend backed out of the kitchen. “I have work to do now. Keep your terrible jokes to yourself.”

“Aw, c’mon. One more. Why is psychoanalysis so much cheaper for a man than a woman?”

“I’m
not
encouraging you.”

“Because when it’s time to go back to childhood, a man is already there.”

“Ha. See, I have wisdom to impart. You should listen to me.”

Lil poked her head around the corner and narrowed her eyes. “You know…it’s almost as if she’s had sugar this morning.”

She dangled her keys and Jane made a grab for them. One benefit of being tall was that keep-away was so easy. “Krispy Kremes. I left them in the car,” she said. “Just to be mean.”