Two Peasants and a President 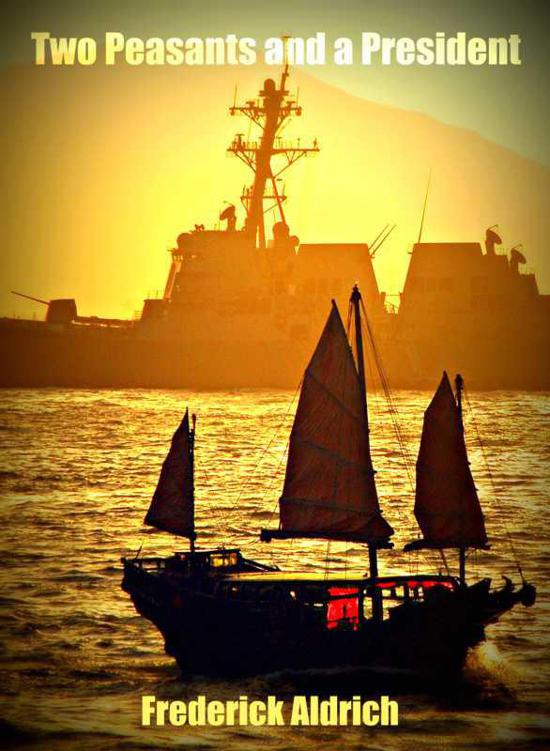 Two Peasants and a President

Also by the author

T
wo Peasants and a President

All rights reserved, which includes the right to reproduce this book or portions thereof in any form whatsoever except as provided by the U.S. Copyright Law.

For
my beautiful daughter
Angeline

And my amazing grandsons

Jim Langley, old friend, talented photographer and avid Kindle reader, for his many helpful suggestions surrounding the publication of this work on Kindle
and his help with the cover
.

Robert
Lendrum
, British photographer residing in Hong Kong for his photo of a Chinese junk and a warship which I used as part of the cover art.

My bright young grandson Jack for pointing out some things I missed.

Like sentinels standing shoulder to shoulder, protecting their treasure from invading barbarians, the
steel and glass
towers seemed to conspire to prevent so much as a glimpse.  The two young Americans knew it had to be near.  They’d walked almost a mile and had begun to sweat in the hot Asian sun, but the towers continued to thwart their quest.

The first hint that they were getting close was a narrow
shaft of wood
protruding above a low structure, the only such structure they’d seen since arriving in this place.  What the structure lacked in height, it made up for in length, extending perhaps a quarter mile into the sea while much of it
was
on land.  They quickened their pace, knowing that they would reach the other side in perhaps fifteen minutes.  There they would learn if what they had sought these many months
lay
be
hind
it.

It had begun as a request so far-fetched as to invite disappointment.  They had debated even mentioning it since they knew its cost would be pr
o
hibitive, but like dreaming children they had dropped the idea into the pot along with their other wishes for that special day.  That was six months ago.

Then, two weeks ago, they spotted among the brightly ribboned boxes an envelope.  It stood leaning against the extravagant expressions of love and affection, tiny by comparison but beckoning nonetheless.  They hesitated, knowing that opening it would dispel all doubt, perhaps replacing it with disappointment that would be quickly smothered with smiles and professions of gratitude.

Holly picked it up, stealing a conspiratorial glance at her husband of less than two hours.  Slipping her slender fingers inside she grasped the card.

For Holly and Ray on your wedding day
,
from your loving parents
, read the message.  Between the pages were two tickets to Hong Kong and a voucher for a honeymoon cruise in Hong Kong harbor and
on
the South China Sea.

It seemed like they’d been wedded to the narrow seats of the plane longer than they’d been married.  More than fifteen hours had elapsed since they’d bid goodbye to their parents, and they had yet to catch a glimpse of the
legendary city.  When the
prepare for landing
announcement finally sounded and the plane banked for its approach, they pressed their faces against the tiny window and stared downward into the night sky.

Beneath them,
hundreds of
gleaming tower
s lined the harbor from waters edge to t
he foot of the mountain,
monument
s
to the unbridled imag
i
nation of ar
chitect
s
unfettered by financial constraints.  Like fabled kings of some futuristic world, each
wore a
bold
neon crown which cast its
melted crayon
glow
in streaks
across the still waters of the harbor.
A
bove them all, the king of kings, a slender silver giant
one thousand five hundred and eighty-eight feet above the harbor
seemed scar
cely
to
notice the gaudy dwarfs
beneath it.  Millions of points of light speckled the shoreline into infinity as the newlyweds stared speechless into this man-created Milky Way.

No veil of sleep descended this
night.  It was as if the electricity had seeped from the buildings into their bodies.  Each time they slipped into their bed, it roused them
again
, beckoning them back to the hotel room window to stare at the extraordinary skyline that is Hong Kong.

The concierge had suggested they take a taxi to the cruise dock, but they were eager to see the city one eye full at a time rather than simply rush through it in the back seat of a cab.  The sweat that now soaked their shirts did not dampen their spirits because they felt certain that the
wooden shaft
must be the top of a mast.  When at last they rounded the corner of the ocean terminal, a little ways ahead, rocking gently at its moorings, was a noble d
e
scendent of more than ten centuries of commerce and warfare.

As if catapulted back into history, the newlyweds stood transfixed at the sight.  Having taken time to research the cruise, they knew that as far back as the early 1900’
s
this very junk had hauled spices and porcelain between Hong Kong and Southeast Asia.  During the Second World War, it smuggled rifles to fight the Japanese.  Now, after a 3 year refit, it was part of a fleet of r
e
furbished junks that provide tourists with a taste of the seafaring commerce of antiquity.

A Chinese man, taller than any they had seen so far, stood at the gangplank.  When they approached, he held out his hand and smiled a greeter’s smile.  After tearing the coupons off their voucher, he stood aside and motioned them up the gangplank.  It was not terribly wide, but there was a rope strung along one side to serve as a handhold; all the more, they ima
g
ined, as it might have been when the tallest buildings in Hong Kong were the three story wooden customs houses along the wharf.

The deck was laid with well-worn wooden planks, smooth but uneven, as if sanded by the soles of numberless feet.  Making their way aft, the newlyweds encountered a middle-aged couple, obviously Chinese, who a
p
peared as though they might be enjoying an anniversary or perhaps just a voyage on a relic of their country’s history.  They turned to greet the Americans.

“Americans, I’d venture,” said the man in almost perfect British En
g
lish.  He appeared
to be
in his fifties with hair trimmed
a
like brush,
scarcely flecked with gray.  Wearing baggy black slacks and simple thin-soled canvas shoes, he looked little different from most of the Chinese they’d seen so far.

“I guess we’re not at all obvious,” Holly laughed.

“Let’s just say we don’t worry too much about American spies around here,” he said with an easy laugh.  “I’m Jimmy and this is my wife, Grace.”

“Hello Jimmy,” said Ray, extending his hand and noticing the Chin
a
man’s hands were supple and without calluses.  “I’m Ray and this is my wife, Holly.”

“What brings you two to Hong Kong?” asked Grace pleasantly, but with an accent absent from her husband’s speech.

“We’re on our honeymoon,” replied Holly.

“Looks like no secrets around here,” Holly laughed.  While Grace seemed pleasant enough, it was a bit more forced than her husband who was clearly the more naturally gregarious of the two.

Ray noticed that the gangplank was being pulled onto the pier and the crew was readying the craft for sailing.

“I take it this is your first time aboard a Chinese junk,” Jimmy said.

“Yes, we’re so excited,” replied Holly, “it’s something we’ve been dreaming about for a long time.  It’s a wedding gift from the most wonderful parents in the world.”

“I see,” he said.  “I believe you’re going to find it most interesting.  You might want to stand over here; they’re getting ready to raise the sails.  You see, unlike western tall ships whose sails were stored on the yard arms and unfurled downward with gravity, the sails on a junk were normally hoisted into place.  And unlike western sails, these sails have ribs, much like the sail on the back of a sailfish, which gives them their distinctive
shape
.”

“How fortunate we are to be sailing with someone so knowledgeable,” said Holly.

“My husband’s great-great-grandfather was a trader,” Grace inte
r
jected.  “He roamed the South China Sea for most of his life.”

“How fascinating!  No wonder you have such an interest in these ships.”

“Yes, they do have a bit of a history.  Why don’t you two newlyweds
check out the bow?  There’s a excellent place up there to sit and watch the skyscrapers slide by.  We’ll be joining you later for dinner.”

The deck shifted beneath their feet as the enormous copper-clad oak rudder signaled a turn from the harbor into the South China Sea.  A mast more than a foot in diameter at its base groaned, protesting wind that tugged at its sails, drawing wrist thick ropes taught between the heavy rails and the rigging above.

“Handy to run into a couple of English speakers,” said Ray.  “Guess we owe that to the Brits
.  They leased this place for
ninety-nine years; not that the emperor had much choice.  Apparently, he neglected to build a navy and when the big-gunned ships of the line showed up one day, they basically invited themselves in.  Made a bundle until the lease ran out in 1997.  Did you know there are more Rolls
Royces
in Hong Kong than there are in Lo
n
don?”

“No
,
I didn’t,” replied Holly.  “Didn’t know my handsome young husband had such an encyclopedic memory either.”

“
There ’
s a great deal you don’t know about me, my dear,” Ray said mysteriously.

“Is that so?  Are you planning on showing me more tonight?”
she asked
teasingly.

A steward appeared behind them and in an almost hushed tone, as if hoping not to awaken someone nearby, announced that dinner was served.  Tracing their way back along the smoot
h wooden
planks, they entered a long, flat deck house lit by brass-clad gas lamps.   Inside, a rough-hewn table topped with bowls of steaming delicacies beckoned them.  The table could easily have seated twelve, but the Americans noticed that their only dinner companions were the Chinese couple.

I Think You'll Find It's a Bit More Complicated Than That by Ben Goldacre
Sins of the Son: The Grigori Legacy by Linda Poitevin
Bisexual: Desired by the Tigers: Bisexual Menage Romantic Suspense (Menage, Shifters, Tiger, Romantic Suspense, Romance, Short Story) by Cooper, Summer
Sweet Spot: A Bad Boy Sports Romance (Bad Boys of Summer Book 2) by Winters,KB
Swansea Summer by Catrin Collier
Murder on the Caronia by Conrad Allen
The Night Voice by Barb Hendee
The Importance of Being Emma by Juliet Archer
The Gantean (Tales of Blood & Light Book 1) by Emily June Street
The Baby's Bodyguard by Stephanie Newton