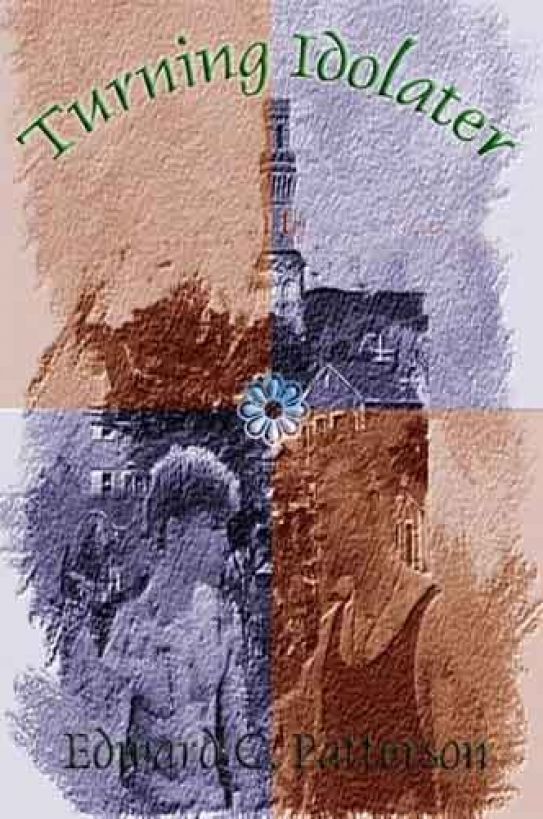 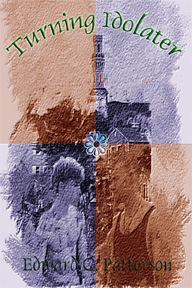 A Novel of the Internet
Age

All rights reserved. This book may
not be reproduced in any form, in whole or in part (beyond that
copying permitted by U.S. Copyright Law, Section 107, “fair use” in
teaching or research. Section 108, certain library copying, or in
published media by reviewers in limited excerpt), without written
permission from the publisher.

The webste
manluv.org
is
registered to Edward C. Patterson for the sole purpose of use in
this book.

I would like to thank the many helpmates that
contributed to the finishing of this book, especially to my editor,
Margaret DeRonde (Peg). I am also indebted to the many participants
of the Indie-Author forums, brilliant writers all, who have
supported me with their advice, both grammatical and technical.
Their enthusiasm for my other novels, particularly
No Irish Need
Apply, Bobby’s Trace
and
Surviving an American Gulag,
has
put me on the map with the public as one bookseller among many keen
on enchanting the reader with his wares. I also wish to thank my
readers, that ground swell that has urged me to keep my fingers on
the keyboard and my hopes sky high. Finally, I want to show homage
and deep obeisance to Herman Melville and Charles Dickens, the two
polar inspirations for this work.

Contents
Part I: High Time to Get to Sea

Chapter One:
The Tools of the
Trade

Chapter Eight:
In the Shadow of the
El

Chapter Ten:
Flight from Avenue A

Part II: In the Hammocks

Part III: In Pursuit of the Red Tide

Chapter Two
: The Secrets of the
Book

“
Whenever I find myself growing grim about
the mouth; whenever it is a damp, drizzly November in my soul;
whenever I find myself involuntarily pausing before coffin
warehouses, and bringing up the rear of every funeral I meet; then,
I account it high time to get to sea as soon as I can.”

“
And what do I wish that this Queequeg
would do to me? Why, unite with me in my particular Presbyterian
form of worship. Consequently, I must unite with him in his; ergo,
I must turn idolater.”

Part I: High Time to Get to Sea
Chapter One
The Tools of the Trade
1

It was a small tub in a tiny bathroom, but it served
Philip Flaxen well as he prepared. All craftsmen attend to the
maintenance and condition of their tools. Chefs hone knives. Hacks
change cab-oil on a schedule. Writers look to their quills; and
painters care for their horsehairs and camels. Diggers sharpen
pickaxes and none but a preacher can fill the fount with
consecrated drink. Thus, it was with Philip Flaxen as he plunged
his hands between his legs lathering the tool of his trade and,
although changing the oil might be less scintillating, the honing
of this particular tool gave Master Flaxen pleasure beyond
measure.

The bubbles welled in massive peaks, like whip
cream, almost eclipsing young Flaxen in a world of cleanser as he
finished off. Nevertheless, his emerging better nature prevailed.
Wineglass in one hand, he reached for a book with the other, his
deep, black eyes intent on the words, not tools now, unless these
were considered some additional craftsman’s artifact. Here in the
pages was a new world, as foamy as his tub; he was under the prow
of the Pequod as it ported its master in pursuit of the Great White
Whale. The words may have been from a shelf above Philip’s normal
mantel, as he had never finished high school, and in fact never
pursued any white whale of education — not even a white elephant of
a diploma, but this book was magic to his eyes. The words may not
have had keen meaning, but they had rhythm — the beat of the waves;
and aroma — the smell of the sea. The pages dripped with foam and
he turned them like a capstan, weighing anchor. The margins
puckered beneath his pruning fingers, but he didn’t care nor did he
wonder. He was tripping beyond the bubble bath, out on old
Nantucket wharves. Therefore, when the alarm clock buzzed, reeling
him to shore, he flinched. The wineglass tipped turning the suds
burgundy and the book nearly swam back to sea. However, Philip
caught it before the plunge, diverting it to dry-dock, in this
case, a mat on the bathroom floor.

Philip rolled his eyes. He had an evening ahead. It
wasn’t difficult work. It didn’t require a Master’s degree to sit
at a computer and wait for requests from an invisible audience. He
wished that Sprakie was better heeled. They could have rigged up
one of them home cams so he wouldn’t have to haul his ass across
town to manluv.org. Hell, some of those set-ups could have made the
tub his workplace. However, he couldn’t be so particular. Manhattan
rents were exorbitant and he was living in Sprakie’s place not by
royal decree, but by near-charity. He did pay his share, or near
it, but as long as he followed his roommate’s rules, he could
luxuriate in the bubbles, sleep on silk and keep his employment
across town.

Philip sighed. He would have preferred to keep
sailing in Nantucket. The words were tough, and he needed to read
each passage twice, but he savored them like a fine corned beef on
rye. He wished he could delve beneath the waves, because he knew
there were deeper meanings swimming there, but there was hope. The
man who had put him onto this book was a generous trick, an old
gent who wanted nothing more than to stroke off before a live
stripping twink. There were such freaky fetishes about, but Philip
was over eighteen. Hell, he was twenty, almost old enough to drink.
His roommate nagged him about such tricks — the old geezers who
just wanted to recall their long lost days. Sprakie also warned
Philip that a few went beyond harmless voyeurism.
Some might
explode like a firecracker and cause you infinite harm,
sweetie.
However, Philip didn’t think that Sprakie, that is
Robert Sprague, would follow his own admonition. Sprakie was the
wildest
hoohoo
in Philip’s acquaintance, and had proved to
be a valuable guide into outrageous waters.

Philip hoisted himself from the tub careful not to
drip bath water on the book. He didn’t have many books, at least
ones with words only. He smiled at the binding as if it were a
candy box with plenty of samples left. Standing before the steamed
mirror, he dried off, keeping his own peerless figure in sight.
What that old geezer must have thought
, he mused. That was a
pacific trick. The man was grateful both with money and a shower of
grizzled kisses, which Philip could have done without, but as long
as things didn’t get too kinky, he supposed it was a kindness —
like a charity visit to the old folks home. Then the man gave him —
the book.
What’s this?
Philip asked.
What’s it look
like?
chuckled the geezer. Philip opened it. It had an aroma
about it like nothing he had touched before — electric and deep.
His eyes scanned the illustration engraved on the page. A huge bump
spouted water from its head and aimed at an old-fashioned ship. It
was about something called Moby Dick and some guy named Herman
Melville penned it. Both were beyond Philip’s ken, but somehow, as
the pages turned under his tidal hand, he was hooked — or
harpooned, if you will.
Call me Ishmael?
Then the call to
the planks and rigging.

Philip dried off and glanced at the clock. He had
better get his ass in gear if he was going to be on time. He
wrapped the towel around his toolbox and sought his flip-flops. It
was a short trip through the common room (he could never come to
call it a living room) to his own small cubby. The apartment was
cluttered from necessity. The kitchen was a mere counter with a
half refrigerator, two cabinets, a two-burner stove and a toaster.
It barged into the common room, the only room with a full window
and small enough to accommodate a couch and a chair. There was a
Murphy bed in the closet for guests, and Philip had slept on it
when he first moved in, but it was a pain in the ass to open, so he
slept in a converted closet.

Sprakie’s room once had a window, but the man of the
house insisted on making the room wall-to-wall bed, of which the
canopy and Arabian valance blocked any sunlight that could have
managed an appearance through the barred window that lurked behind
some plywood. Philip had to rattle through this bedroom to get to
his small cubby. Small, but it was his. By real estate value, his
six by six (if it were that) would fetch $500 a month on a good
day, but Sprakie let it go for $250 and a third of the utilities. A
bargain. The only drawback was when Sprakie entertained — that is,
went on the clock. Philip would need to fade to the streets
then.

What to wear? Not a huge variety in his clothes
stack, which mushroomed in the corner laundry basket. Philip
wondered if he had anything clean. The launderette on Avenue A was
a pain in the ass to use — all those quarters and little boxes of
soap, not to mention the stink. At one time he could flirt with the
local hustlers there (it was a good pick up point), but lately the
place was filled with haggard old Puerto Rican housewives and
skuzzy, green haired Goth girls from the West Village. He reached
for his favorite shirt — a turquoise silk affair that favored his
curly shock of hair. He sniffed the armpit and choked.

The Keeper: A Short Story Prequel to Forbidden by Ted Dekker, Tosca Lee
Dick Tracy by Max Allan Collins
Robert Lowell: A Biography by Ian Hamilton
Dying Flames by Robert Barnard
Death Too Soon by Celeste Walker
Bought by Charissa Dufour
Betrayal of the Dove (Men of Action) by Montgomery, Capri
Every Step She Takes (Who's Watching Now Book 2) by Jannine Gallant
A Bargain with the Boss by Barbara Dunlop
The Third Grace by Deb Elkink