The Girl Who Lived Twice

THE MILLENNIUM SERIES BY STEIG LARSSON

The Girl with the Dragon Tattoo

The Girl Who Played with Fire

The Girl Who Kicked the Hornet’s Nest

THE MILLENNIUM SERIES BY DAVID LAGERCRANTZ

The Girl in the Spider’s Web

The Girl Who Takes an Eye for an Eye

The Girl Who Lived Twice

I Am Zlatan Ibrahimovi
ć

Fall of Man in Wilmslow 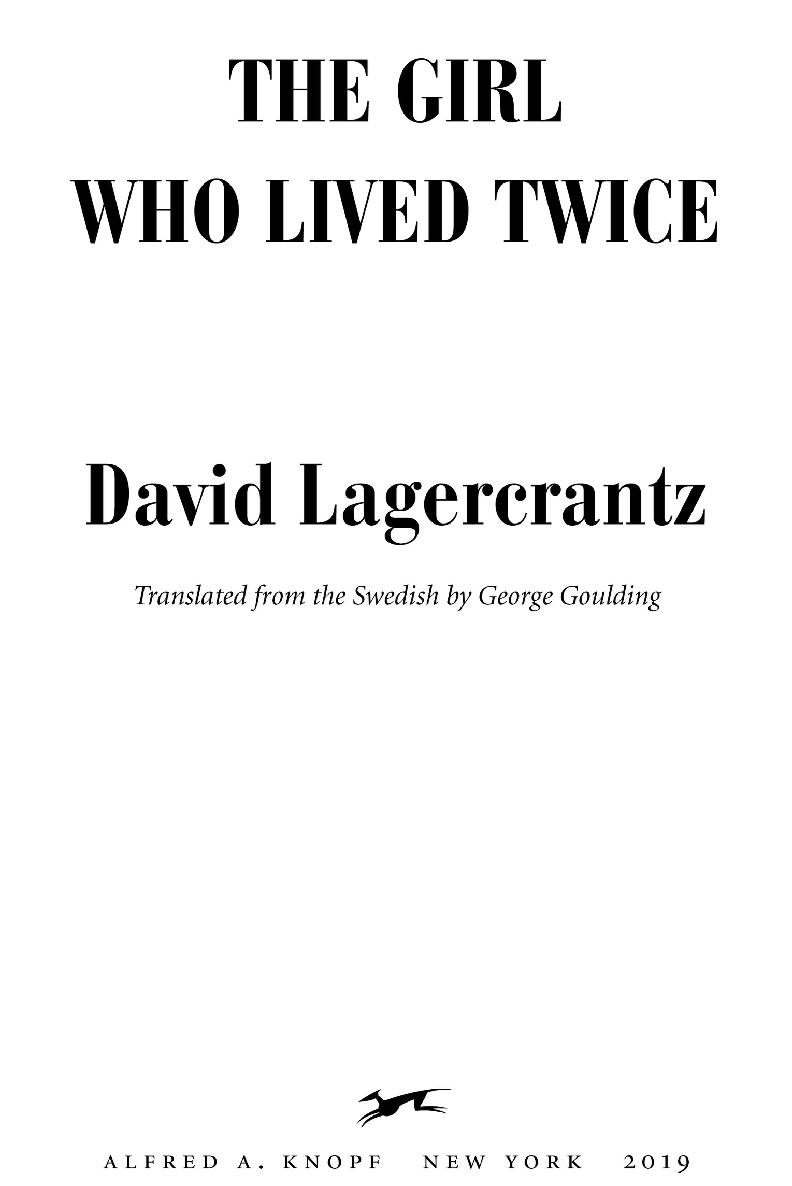 THIS IS A BORZOI BOOK PUBLISHED BY ALFRED A. KNOPF

All rights reserved. Published in the United States by Alfred A. Knopf, a division of Penguin Random House LLC, New York. Originally published in Sweden as
Hon som måste dö
by Norstedts, Stockholm, in 2019. Copyright © 2019 by David Lagercrantz & Moggliden AB. This translation is simultaneously published in hardcover in Great Britain by MacLehose Press, an imprint of Quercus Publishing Ltd, London, in 2019, by agreement with Norstedts Agency. Published by arrangement with Quercus Publishing PLC (U.K.).

Characters and Organizations in the Millennium Series

Part I: The Unknown

A Note about the Author

CHARACTERS AND ORGANIZATIONS IN THE MILLENNIUM SERIES

LISBETH SALANDER
, an elusive, exceptionally talented hacker and mathematical genius, tattooed and with a troubled past, driven by a need for justice—and vengeance.

MIKAEL BLOMKVIST
, a leading investigative journalist at
Millennium
magazine. Salander helped him to research one of the biggest stories of his career, about the disappearance of Harriet Vanger. He later helped to clear Salander of murder and vindicate her in a legal battle over her right to determine her own affairs. Sometimes nicknamed “Kalle Blomkvist,” after a boy detective who appears in several novels by Astrid Lindgren.

ALEXANDER ZALACHENKO
, also known as Zala, or by his alias, Karl Axel Bodin. A Russian spy who defected to Sweden and was protected for years by a special group within Säpo. He was the head of a criminal empire but also the father of Lisbeth Salander, who tried to kill him for the violent abuse of her mother. Ultimately he was finished off by Säpo.

CAMILLA SALANDER
, Lisbeth’s troublesome twin sister, from whom she is estranged. Linked to criminal gangs and thought to live in Moscow. Known within her networks as Kira.

AGNETA SALANDER
, Lisbeth and Camilla’s mother, who died in a nursing home at the age of forty-three.

HOLGER PALMGREN
, Salander’s former guardian, a lawyer. One of the few people who knows Salander well and whom she trusts. Recently murdered by associates of Peter Teleborian, for holding documents that shed light on Salander’s abuse as a child.

DRAGAN ARMANSKY
, Salander’s former employer, the head of Milton Security. Another of the few people she trusts.

SONJA MODIG
, a police inspector who has for some years worked closely with Bublanski, along with
CURT SVENSSON
,
AMANDA FLOD
and
JERKER HOLMBERG
.

HANS FASTE
, a police officer who has clashed with colleagues in the past, and leaked information during an earlier investigation into Salander.

SÄPO
, the Swedish security police, which harboured a secret faction, known as “the Section,” dedicated to protecting Zalachenko.

MUST
, the Swedish Military Intelligence and Security Service.

A beggar nobody had seen before appeared in the neighbourhood that summer. No-one knew him by name, nor seemed to care much about him, but to a young couple who passed him every morning he was the “crazy dwarf.” He was in fact around five feet tall, but he was certainly erratic, and he would occasionally spring up and grab people by the arm, babbling incoherently.

Most of the day he sat on a piece of cardboard right by the fountain and the statue of Thor in Mariatorget, and there he commanded a measure of respect. With his head held high and his back always straight he looked like a chieftain who had fallen on hard times. That was all the social capital he had left, and it was why some people still tossed him coins or banknotes, as though they could sense a lost greatness. And they were not mistaken. There had indeed been a time when people bowed before him. But all repute, all status, had long since been stripped from him. He was missing several fingers and the dark patches on his cheeks did not improve his appearance. They looked to be a shadow of death itself.

The only thing which stood out was his quilted down jacket, a blue Marmot parka which must have been expensive. It looked so out of place, not just because of all the dirt and stains on it, but also because it was much too wintry a garment to be worn at the height of summer in Stockholm. An oppressive heat lay over the city, and as the sweat trickled down the man’s cheeks, passersby studied the jacket with a pained expression, as if the very sight of it made them feel uncomfortably hot themselves. But the beggar was never without it.

He looked lost to the world and seemed unlikely ever to be a threat to anybody, but it was later said that at the beginning of August a more determined expression came over him. On the afternoon of the eleventh he was seen painstakingly writing out a screed on lined A4 paper and, later that same evening, he stuck it up like a newspaper on the bus stop at Södra Station.

It was a rambling account of a storm and referred by name to a member of the government. A young medical intern called Else Sandberg, who was waiting for the number 4 bus, managed to decipher parts of it and could not help being intrigued, professionally. Her best guess at a diagnosis was paranoid schizophrenia.

But when the bus arrived ten minutes later, she forgot all about it, left only with a feeling of unease. It was like the curse of Cassandra: Nobody was going to believe the man because the story he was telling was so wrapped up in madness. Yet somehow his message must have got through, because the very next morning a man in a white shirt got out of a blue Audi and tore the papers down, crumpling the shreds of them and taking them back to his car.

On the night of Friday, August 14, the beggar made his way over to Norra Bantorget to get hold of some moonshine. There he met another drunk, a former industrial worker named Heikki Järvinen, from Österbotten.

There was no answer, not at first. Then a stream of words came pouring out, which to Heikki sounded like a load of bragging, and he hissed “what total bullshit,” adding needlessly—he admitted as much himself—that the man looked like a “bloody Chinaman.”

“Me Khamba-chen…hate China!” the beggar yelled at him.

Then he punched Heikki with his damaged hand and, even though there was no skill or technique there, the blow carried an unexpected authority. Heikki was bleeding from the mouth and swearing profusely in Finnish as he staggered away, down into the tunnelbana at Central Station.

The beggar was next seen back in his familiar neighbourhood, very drunk and clearly feeling ill. Saliva ran from his mouth and he was holding his throat and muttering:

He never waited for an answer but crossed Ringvägen like a sleepwalker, and soon after that he threw an unlabelled bottle onto the ground and disappeared among the trees and bushes of Tantolunden. A light rain fell overnight and in the morning a north wind was blowing. By eight the wind had died down and the skies had cleared, and the man was seen on his knees, leaning up against a birch tree.

On the street, preparations were underway for the Midnattsloppet race that coming night. The neighbourhood was in a festive mood.

The beggar was dead.

No-one cared or knew that this strange man had lived a life of unimaginable hardship and heroism, still less that he had only ever loved one woman, and that she too, in another time, had died in devastating solitude.

Let the Night Begin by Kathryn Smith
How to Outrun a Crocodile When Your Shoes Are Untied by Jess Keating
Broken (The Outsiders Series) by Loeak, Jamie
Forced Magic by Jerod Lollar
Harry Flashman and the Invasion of Iraq by H.C. Tayler
Buck by M.K. Asante
Who's That Lady? by Andrea Jackson
Cinnamon by Emily Danby
Dancing Backwards by Salley Vickers
Possession by Linda Mooney