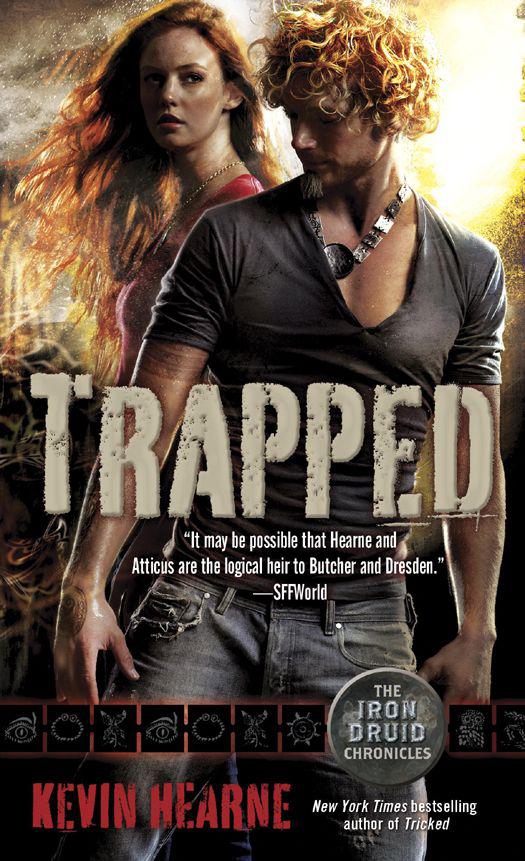 PRAISE FOR
THE IRON DRUID CHRONICLES
BY KEVIN HEARNE

“This is the best urban/paranormal fantasy I have read in years. Fast paced, funny, clever, and suitably mythic, this is urban fantasy for those worn-out of werewolves and vampires. Fans of Jim Butcher, Harry Connolly, Greg van Eekhout, Ben Aaronovitch, or Neil Gaiman’s
American Gods
will take great pleasure in Kevin Hearne’s
Hounded
. Highly recommended.”

“Filled with snarky descriptions … comradely characters, thumping action and a plot as stylized as a Renaissance Faire, this tale is outrageously fun.”

“A superb urban fantasy debut … with plenty of quips and zap-pow-bang fighting.”

“Fans of fantasy and urban fantasy will eat this one up.…
Hounded
is a series debut that is absolutely not to be missed!”

“For both the urban fantasy and non–urban fantasy geekoids,
Hounded
is a tremendous read. Fun, well-written, and entertaining.”

—Blood of the Muse

“A page-turning and often laugh-out-loud-funny caper through a mix of the modern and the mythic.”

—A
RI
M
ARMELL
, author of
The Warlord’s Legacy

“Kevin Hearne … cranks out action and quips at a frenzied pace … in this fun and highly irreverent read.”

“Hearne’s writing is fast paced and spot on …
Hexed
is steeped in magic and wrapped in awesome. It really doesn’t get much better than this!”

“The humor in
Hexed
is non-stop.… Hard to read without a smile plastered across your face.”

—Blood of the Muse

“I love, love, love this series, and
Hammered
is the best so far.… You’ll be turning pages in warp speed until the final battle, then you won’t be able to turn them fast enough.”

Trapped
is a work of fiction. Names, places, and incidents either are products of the author’s imagination or are used fictitiously.

Published in the United States by Del Rey, an imprint of The Random House Publishing Group, a division of Random House, Inc., New York.

D
EL
R
EY
is a registered trademark and the Del Rey colophon is a trademark of Random House, Inc.

This book contains an excerpt from the forthcoming book
Hunted
by Kevin Hearne. This excerpt has been set for this edition only and may not reflect the final content of the forthcoming edition.

If you’re an old hand with the series, then you know that some of the Irish names can be challenging if you try to say them according to English spelling rules. Since I have a lot of Irish names in this book, I’m taking the opportunity to repeat some names that I haven’t addressed since
Hounded
. As always, this guide is intended to help those who’d like to say everything correctly in their head. There is no requirement to do so, and I won’t be annoyed if you pronounce things however you like—especially since these are presented largely in the Ulster dialect, and folks who speak in the Munster dialect would pronounce them differently anyway. You’re supposed to have fun, dang it, so have fun whether you say these correctly or not! There won’t be a test later.

Brighid = BREE yit (First Among the Fae, her magical powers are rivaled only by those of the Morrigan)

Cnoc an Óir = KNOCK a NOR (Location on the plane of
Mag Mell; source of the healing hot springs. Literally means
gold hill
)

Creidhne = CRAY nya (One of the Three Craftsmen, specializes in bronze, brass, and gold)

Emhain Ablach = Evan ah BLACH (That’s a guttural
ch
that often gets left off and pronounced like an
ah
, as it does in the words
Fragarach
and
Moralltach
. Means Isle of Apples)

Fand = Fand (I know, right? What are the odds that you’d say it the way it’s spelled? Daughter of Flidais, married to Manannan Mac Lir)

feeorin = FEY oh rin (A type of faery in Irish lore, which precedes the birth of George Lucas; bears absolutely no relation to the reptilian alien species in the
Star Wars
universe)

Fragarach = FRAG ah RAH (Legendary sword that can cut through any armor; the Answerer)

geancanach = gan CAN ah (Another type of faery)

Goibhniu = GUV new (One of the Three Craftsmen, specializing in smithing and brewing)

Granuaile = GRAWN ya wale (People ask me about this one a lot, so there you go)

Luchta = LOOKED ah (The
ch
is kind of a guttural job, but I’m approximating with a
k
sound here. One of the Three Craftsmen, specializing in woodcraft. He’s sometimes referred to as Luchtaine in myth.)

Mag Mell = Mah Mell (One of the Irish planes of paradise; the really posh one)

Manannan Mac Lir = MAH nah non mac LEER (God of the sea and psychopomp to five planes of the afterlife, including Mag Mell and Emhain Ablach)

Moralltach = MORE ul TAH (Another legendary sword
with an enchantment of necrosis on it; one strike and you’re toast. Means Great Fury)

Tír na nÓg = TEER na NOHG (Land of Youth. The primary Irish plane through which Druids shift to other planes.)

Bacchant = BOCK ent (There are alternate pronunciations for these that are perfectly valid; this is just the one I prefer)

Polyphonte = polly FAWN tay (Learned what happens when you displease Aphrodite; mother to Agrios and Oreios)

You know those spastic full-body twitches you get sometimes when you’re almost asleep and your muscles want to play a practical joke on your brain? You startle wide awake and immediately get pissed at your nervous system, wondering what the hell
that
was all about. I’ve caught myself talking to it before: “Damn it, Dude”—yes, I call my nervous system Dude, and the Dude abides—“I was almost asleep, and now you’ve slain all the sheep I was gonna count.”

What I felt as I walked on the Kaibab Plateau was kind of like that, except it was Gaia doing the spastic full-body twitch. It was more of an uncomfortable shudder that I felt through my tattoos, like when you step barefoot into the garage in winter and your nipples pucker up. But, as with those nervous muscle spasms, I got irritated about it and wondered what the hell was going on. And while I wasn’t about to go to sleep, I was about to enjoy the culmination of twelve years of training an apprentice—and, save for the first few months of it and a harrowing episode halfway through, I’d conducted it all in peace. Granuaile was finally ready to become a full Druid, and we’d been searching for a place to bind her to the earth when I felt the tremor. I shot a question to the elemental, Kaibab, in the cocktail of feelings and images they use instead of language: //Confusion / Query: What was that?//

//Confusion / Uncertainty / Fear// came the reply. That chilled me. I’d never heard confusion from an elemental before. The fear, on the other hand, was perfectly normal: Despite their awesome power, elementals are afraid of almost everything, from placer mines to land developers to bark beetles. They can be real scaredy-cats sometimes. But they’re never uncertain about what’s going on with Gaia. Stopping in my tracks and causing Granuaile and Oberon to turn and look at me quizzically, I asked Kaibab what there was to fear.

Well, that confused me too. Kaibab wasn’t talking about an airplane. He (or she, if Granuaile had been the one talking to the elemental) meant an entire plane of existence, a plane that was tied to earth somewhere on the other side of the globe. //Query: Which plane?//