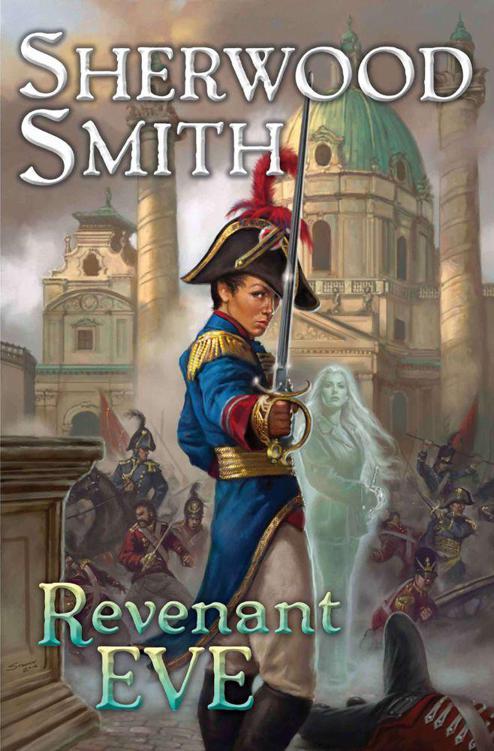 BANNER OF THE DAMNED

All characters in the book are fictitious.

Any resemblance to persons living or dead is strictly coincidental.

The scanning, uploading, and distribution of this book via the Internet or any other means without the permission of the publisher is illegal, and punishable by law. Please purchase only authorized electronic editions, and do not participate in or encourage the electronic piracy of copyrighted materials. Your support of the author’s rights is appreciated.

PRINTED IN THE U.S.A.

To the friends of Dobrenica

My thanks and gratitude to Koby Itzhak and to two persons who happen to have the same first name (Faye) for help with Jewish lore, to Gregory Feeley for the title, and to Rachel Manija Brown and Hallie O’Donovan for beta reading and support.

T
HE JOURNALIST POISED HER PENCIL
and looked at me expectantly. “So, Mademoiselle Murray, how does it feel to know that in a month and a half you will become a princess?”

Like living at Disneyland
, I wanted to say, but there was a fifty-fifty chance that my interviewer had never heard of it.

In so many ways, Dobrenica was still a century (sometimes more) behind modern times. Madam Waleska, who ran the inn where I’d stayed during my first two visits, had once insisted with genuine horror that I could not possibly be an American because I didn’t spit on the floor. That particular rumor dated back to Mrs. Trollope’s
Domestic Manners of the Americans
, written in 1832, but to the Dobreni it may as well have been posted on the Internet last week.

Not that you can access the Internet in Dobrenica. You can’t. Cell phones don’t work, either. Land lines work…most of the time.

So here was this question, put to me from Annika, an earnest young woman barely college-age, on assignment for the Dobreni newspaper. A weekly. Judging by her rigorously polite manners, I guessed that this was her first assignment. We sat in a little café in the center of town that was, judging from the architecture, about three hundred years old. Practically new, for Dobrenica.

The editor of the newspaper was probably being modern by sending
a female to interview me. I wondered if Annika was the first, possibly the only, female on the staff. But then the newspaper itself had a spotty history, free speech being a relatively new concept. From the days of World War II until relatively recently, Dobrenica had been under German and then Soviet control.

For the Dobreni, the prospective return to monarchy was progress. To me—Los Angeles born and raised—it seemed weird.

And the idea of being a princess made me feel
really
weird.

“First of all, you can call me Kim. It’s true my first name is Aurelia—I was named for my grandmother—but it will be relegated to official purposes only. I never use it. To answer your question, what does it feel like?” I practiced my princessy smile. My teeth felt cold, and I had a nasty feeling my smile looked as real as a three-dollar bill. “I’ve been so busy that I haven’t had a chance to figure out how I feel,” I said, wondering how diplomacy differed from outright lying. “This is what I can tell you: how wonderful it is to find myself in Dobrenica again, how beautiful everything is.”

And I gushed on, praising everything from the royal palace (I was still trying to get my head around the fact that I would actually be living in one) to the historic sites (in Dobrenica, pretty much everything is a historic site), to the shops along St. Ladislas Street, the Rodeo Drive of Dobrenica.

The way Annika slowly relaxed gave me hope that even if my words were boring, they assured her that I was not going to chop her into bits and serve her for breakfast. For her, my imminent rank had historical gravitas, even if it felt like a fairy-tale to me.

When I ran out of things to burble about, Annika’s dark gaze narrowed. She squared herself a little on her chair.

I glanced at her small pad of paper, on which she’d written down about five words of my diplomatic burble.
Here come the real questions
.

“There are so many conflicting rumors about how you found your way here from the United States,” she said.

She flashed me a tentative smile, then pressed her pencil to the paper.
“How did you meet the Statthalter?” Her tone was as neutral as her use of the technically correct title for my fiancé, Marius Alexander Ysvorod, shortly to be officially recognized as Crown Prince of Dobrenica.

He had been unofficially recognized since the bad old Soviet days. He was just a kid when he joined his father in running a kind of shadow government and black market social services. Toward the end of those days the Soviets no longer put much energy into thwarting them, and even permitted elections. When his father’s health began to fail, Alec was voted Statthalter, a suitably unmonarchical-sounding title.

As the Soviets began to leave by degrees, the five traditional ruling families began to pick up their ancestral duties—and privileges. Especially the von Mecklundburgs, and in particular the Duchess and her son Tony, Alec’s sometimes-friend, sometimes-rival.

“The Statthalter found me by accident,” I said. “Or maybe it wasn’t so accidental. I was in Vienna, at the Hofburg—the imperial palace. I saw what I thought was someone dressed in eighteenth century clothes, and followed her, but she turned out to be a ghost. Queen Sofia, in fact.”

In any other part of the world, the mention of following ghosts would net you, at best, the kind of glance usually reserved for the bug you just discovered in your half-eaten salad. But here? She gave me a cautious nod, and said, “She was a Vasa from Sweden. Very famous in Dobrenica.”