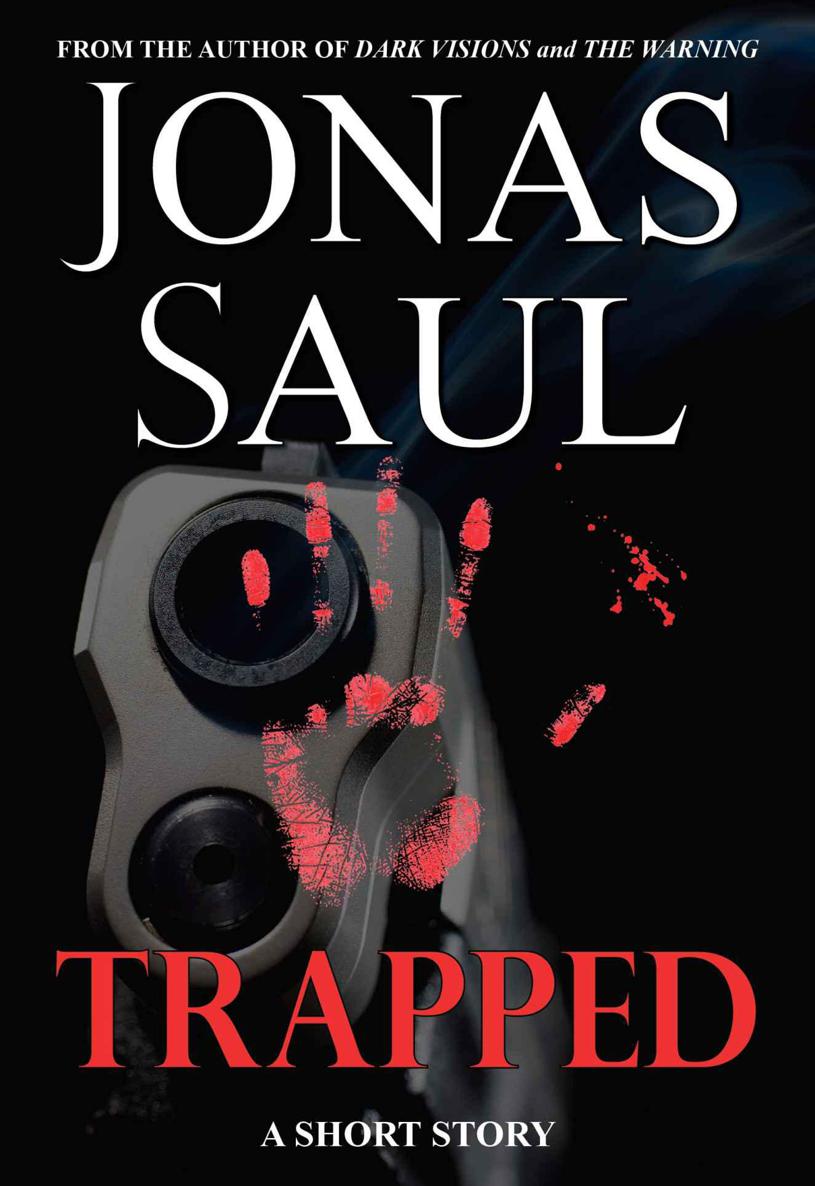 Visitations - A Book of Short Stories

The small restaurant appeared out of the late evening fog. The darkness of the past hour had begun to work on her nerves. Melissa Walkens flipped the blinker to turn right. The neon open sign remained lit in the night, calling to her, which translated to Melissa as a bathroom and a coffee.

Maybe directions too. I’ve probably taken a wrong turn to end up out here, wherever here is.

She pulled up close to the building and turned her Cadillac Sedan off. She felt something eerie about the place. The silence was deafening after the prolonged din of the road under her tires. She took a brief look through all the car’s windows, and then opened her door a crack.

Normally she wasn’t paranoid. This had more to do with caution than fear. Better to be on guard then caught by surprise. Yet something bothered her. To put a finger on why she felt out of sorts was difficult, which left her with the thought that she was over analyzing things in a state of weariness.

Or maybe it was fear. Fear of the unknown.

She eased the car door open all the way and stepped from the vehicle. The cool, moist air filled her nostrils. She took a deep breath and stretched her arms high to wake the back muscles that had cramped since she had left her sister’s place. A soft push, and the car’s door shut quietly in the night.

The light from the restaurant only went as far as the edge of the road. The far side of the two-lane tarmac remained obscured in darkness. The thought of being alone out there in that darkness when she should be at home, warm and reading a book with a glass of wine, was enough to unsettle her.

The sound of a fly getting caught in an electric zapper made her jump and turn toward the building. The bathroom called her name and she needed caffeine more than an addict needed a fix.

The door creaked like in a horror movie as she opened it. Her stomach dropped a notch with the sound. The inside of the restaurant was modern and looked gorgeous as far as roadside coffee stops go. Beautiful wooden tables were lined perfectly down the left side by the windows and padded chairs sat unattended by each table. A long silver bar-like counter stretched the length of the restaurant with a row of fifties-era circular stools lined in front of it. An old jukebox sat at the far end, lights flashing on and off, but silent.

Melissa jumped and raised a hand to her chest. “Oh, you scared me,” she said and then took a deep breath to collect herself. “I’m sorry. I don’t usually spook that easily.”

“It’s okay. It’s late and we’re closing in about fifteen minutes but I still have coffee on if you need some.”

The woman looked to be in her fifties. A gray batch of hair tied into a bun and covered in a net, sat atop her head. She had the skin of a smoker and the longest earrings Melissa had ever seen. They dangled down past her shoulders way too far.

“Coffee would be great,” Melissa said. She pointed at the restroom sign and said, “I’ll be right back.”

“I’ll set your coffee on the counter over there,” the woman said, pointing halfway down the length of the counter.

Melissa nodded and started past the tables toward the jukebox where the bathroom sign hung. Once inside the restroom, she realized that she hadn’t looked to the right of the main counter. She hadn’t noticed if anyone else was in the coffee shop. Was she alone with the old woman or could there be someone else?

Why am I so nervous? It’s just a roadside restaurant.

She heard a young man shout from behind the wall. He said something about the fryer being turned off and the grease replaced for tomorrow. He went on about the dishes, but she lost the clarity of his voice as he moved away.

Melissa wiped quickly, washed her hands and used a brown paper towel to open the door. While walking back up the length of the tables she looked past the main counter and saw there was just enough room for two more tables on the other side. One of the tables was occupied by a woman of about thirty years of age and a young girl who sat facing away from Melissa. She appeared from the back to be about ten-years-old.

The woman’s eyes caught Melissa’s. They locked for a brief moment. Melissa nodded and smiled, then looked away and sat on the stool where her coffee waited. The clock on the wall above the rectangular hole where the woman could shout orders back to the cooks, said it was ten minutes to midnight.

A boy of about sixteen walked by the hole. His profile was all she caught as some of the lights in the rear were off now. The side view was enough to spike her radar again.

She felt edgy, like someone’s eyes were on her.

Melissa stole a glance to her right. The woman with the little girl hadn’t stopped staring at her. She quickly looked away and took another sip of her coffee.

What’s going on? I don’t know these people. There’s no reason to be so paranoid. Maybe the woman with the little girl imagines she recognizes me or something?

Melissa looked just enough to the right to catch the woman in her peripheral vision. The woman’s head was turned as she stared out the window. Melissa turned more to see what had caught the woman’s eye and saw a black van pulling in beside her Cadillac. The headlights turned off and both front doors opened. She watched as the driver ran around to the passenger side to help the other occupant out. Not to be caught staring, Melissa turned back around. As she did, her eyes snatched a glimpse of the kid in the back disappearing from the corner of the hole.

He had been watching her.

A shiver coursed through her body. Goosebumps formed on her arms.

What the hell was going on? This place is fucking creepy.

It was time to leave. But she had to pay for her coffee and she wanted advice on how to get back to the main highway.

Decision time. Should I just get up, leave money on the counter and walk out? Or wait and be polite as there’s probably nothing happening here and I’m just a paranoid housewife.

Once on the road with the doors locked, she’d feel a hell of a lot better.

Her pocket change was enough to cover the coffee. She placed the bills on the counter. At that moment the door opened behind her and the van’s occupants entered the restaurant. She rationalized that with more people around she’d be fine. Safety in numbers.

The two men who entered couldn’t be the problem. The driver who had run around to help the passenger had done so because the passenger was blind. He wore thick black sunglasses. In his hand was a white cane with a red tip. It was difficult to peg an age because of the glasses but Melissa felt he’d be around the thirty-five area. His arm was laced through the arm of the driver who looked like a clean-cut military type in his forties.

The driver nodded at her and smiled. She watched as he looked over his shoulder at the woman and the girl. They also nodded, but it was different. An imperceptible amount of time passed during their nod. It was like they knew each other and were meeting here. Or they’d seen one another before.

The driver smacked the bell on the counter to get the employee’s attention.

Good, I’ll wait until the woman emerges from the back, pay, get directions and get out.

But the older woman didn’t come to the counter. Instead the young kid from the back did. He was not a good actor at all. He had worry written all over his face. His eyes were furtive and his hands jumpy.

Something is one hundred percent wrong.

Melissa was sure of it now.

The driver of the van asked the kid for two coffees. As he did, the blind man looked right at her. She knew he couldn’t see her, but it felt like he could.

Then he turned to the kid and raised his hand. He put his index finger to his neck as if to scratch and then his hand shot forward and opened.

The driver looked glanced at her. Melissa glared down at her coffee while she tried to decide what to do.

Her cell phone was in the Caddy. Her purse was in the Caddy. She had spent the weekend at her sister’s house. Eva had lost her hearing when she was five-years-old. Melissa learned sign language alongside her sister all those years ago. Sometimes, when not using sign often, she failed to remember certain things. But after a whole weekend of it, she was right back in and honed on the acronym H.O.L.M.E.. She recited it to herself while the kid poured coffee for the two men from the van.

For the last seventy-two hours she had been signing. Then a blind man walked into the coffee shop and did the sign for a word that scared her.

She looked in time to see him brush his cheek with his index finger twice.

Then he held his palm up, aimed at his face. He twisted it around to face outward and moved it away slowly.

What’s he saying? Kill the woman if she gives you any attitude?

Melissa felt like she had nerves made of confetti. She lifted off her chair and was settling back down in pieces.

“I’m sorry … I meant no disrespect with my gawking.”

“It’s okay,” the driver of the van said. “Not many people see a blind man in these parts.” He leaned closer and placed a hand beside his mouth in the gesture that he was going to whisper. “Gawk all you want. He can’t tell.”

The driver stood back up to his full height, smiled wide and turned around to face the kid behind the counter who was placing two coffees down.

The clock above the kid’s head now said three minutes to midnight.

When the driver reached out to grab both cups, his jacket lifted and something reflected the light off his belt area. Melissa saw what was there and audibly gasped.

The butt of a large gun rested just under his jacket.

They were going to rob the place. She was sure of it. They would kill anyone who gave them attitude. And only she knew this because she knew sign language.