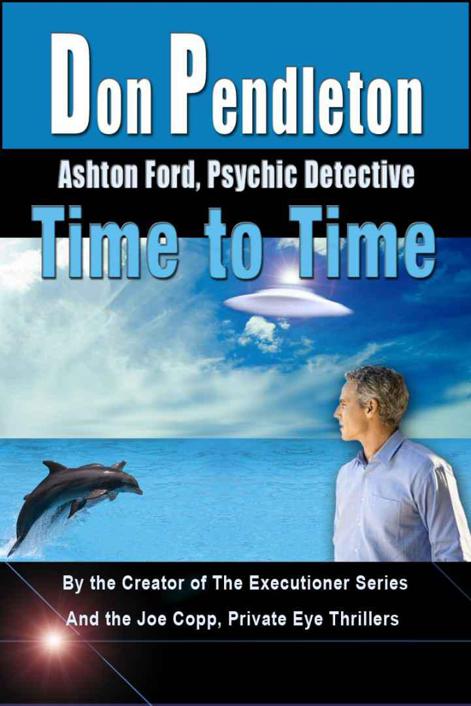 by the Creator of

Published with
permission of Linda Pendleton.

This is a work of
fiction. Any similarity to actual persons, groups, organizations, or events is
not intended and is entirely coincidental.

Copp in the Dark

Roulette: The Search
for the Sunrise Killer

War Against the Mafia, Comic

A Search for Meaning
From the Surface of a Small Planet

To Dance With Angels

Whispers From the Soul

Metaphysics of the
Novel

For all those who have
shared the experience, and still wonder. Take peace.

Ashton Ford will come
as something of a surprise to those of you who have been with me over the
years. This is not the same type of fiction that established my success as a
novelist; Ford is not a gutbuster and he is not trying to save the world from
anything but its own confusion. There are no grenade launchers or rockets to
solve his problems and he is more of a lover than a fighter.

Some
have wondered why I was silent for so many years; some will now also wonder why
I have returned in such altered form. The truth is that I had said all I had to
say about that other aspect of life. I have grown, I hope, both as a person and
as a writer, and I needed another vehicle to carry the creative quest. Ashton
Ford is that vehicle. Through this character I attempt to understand more fully
and to give better meaning to my perceptions of what is going on here on Planet
Earth, and the greatest mystery of all the mysteries: the why of existence
itself.

Through
Ford I use everything I can reach in the total knowledge of mankind to
elaborate this mystery and to arm my characters for the quest. I try to
entertain myself with their adventures, hoping that what entertains me may also
entertain others—so these books, like life itself, are not all grim purpose and
trembling truths. They are fun to write; for some they will be fun to read. To
each of those I dedicate the work.

Once Upon a Time

How do you feel about
flying saucers? I always wanted to see one. Wanted to ride in one. I kept hearing
the same stories you've heard—read all the books, watched all the movies, even
spent time camped on a hillside during several "flap" periods. Never
caught even a glimpse of one. Was never contacted or confronted or approached
in any way by visitors from another star.

Or
so I thought, anyway.

Turns
out I could've been wrong about that for quite a long time.

You
could be wrong, too, if you think you've never been contacted.

The
sensing I get now is that quite a number of people on this planet could be
intimately involved with other-star beings without consciously realizing it.
The stories that get written about and talked about could represent nothing
more than a few odd incidents here and there that somehow misfired or went
wrong.

I
get another sensing that all of us may be aliens, too. Alien to this planet, I
mean. All of human life. Maybe it did not start here. Or if it did start here,
maybe it was started deliberately by some of those daring beings in their
flying machines who needed biological robots to assist them in their work with
this planet.

I
have evidence to back up these sensings.

That
is what this case is about. So be forewarned. If you believe that UFO phenomena
can all be explained in purely psychological terms, then you may not enjoy this
case as I did; maybe you should just take a walk right now. Or maybe you
shouldn't. I have evidence also to suggest that the most hard-nosed skeptics
may unwittingly be the most involved in all this intrigue.

Once
upon a time, you see, long, long ago—about, I figure, eight hundred million
years ago...

Ted Bransen was
waiting in his Bentley outside my Malibu beach pad when I returned home one
night recently. I had been to one of those celebrity soirees in Beverly Hills
and I'd seen him there, although we had not spoken. I thought I'd left early so
I was more than a little surprised to find the guy at my front door.

Ted
is a pretty good doubles partner and he also has a backhand that comes right
off the ground, but that is about the best I can say for him. I never spent a
lot of time with him off the court. He'd never seemed to seek my company
either, which is another reason why I was surprised to find him waiting for me.

I
don't know his age but he's pushing forty and his miles are beginning to show.
Still a very handsome guy if you're going just for surface, and he can be
plenty charming when he wants to be. He can also be nasty as hell and I think
he has more enemies than friends in the community. In fact, I would probably
have to say that most of his friends come via his wife. He is married to Penny
Laker. Yeah, that Penny Laker.

The
guy never made much for himself in pictures but he did the next best thing,
married Penny and took over the management of her career, which—to his
credit—has been going nowhere but up ever since.

So
I was wondering why the guy was parked outside my house at Malibu in the middle
of the night when we'd been in the same room together without speaking an hour
or so earlier.

I
went on past him and tucked my Maserati in the

garage, then came
back through the house to see if he was still there. He was, nervously working
at a cigarette and staring at my door. So I went back out and spoke to him
through the open window of his Bentley.

"No,
I was just waiting to see if someone might be following you home."

He
blew smoke at me and replied, "No one in particular. Take it easy. This is
no jealous husband routine."

Well,
I was glad to hear that—though I hadn't really thought of that scenario myself.

"Beat
me home," I observed.

He
grinned. "In that Maserati? You must have stopped along the way."

Matter
of fact, I had.

I
said, "You didn't come all the way up here just to say hello."

I
sighed. "Well, come inside and I'll rassle us up a pot of coffee."

"I
really don't have time for that, Ash," he replied. "But I want to
retain you. Can we get together tomorrow and discuss it?"

"Retain
me for what?"

His
eyes twitched as he told me, "Penny's into some kind of weird shit and
it's driving me crazy. I'd rather not get into the details right now because I
really need to get back into town, but let's—"

"Why
didn't you just call me?"

"Look,
this has to be absolutely confidential. I'm even afraid to use the telephone.
And I couldn't really approach you at the party, could I, with all those
columnists nosing around with their micro-recorders humming away. Look, I'll be
honest, I didn't even think of you until I saw you tonight. Then it hit me.
Shit!—
there's
the guy for the
job!"

"What
job?" I inquired quietly.

"Think
so, yeah. Only maybe worse. I mean, this isn't tea leaves and birth signs. It's
something very heavy. And it's going to wreck her career if I can't get her out
of it."

I
commented, "She's past twenty-one, Ted. What do you expect me to do?"

He
reached through the car window and put a hand on my arm, snarling, "Cut
that shit! This is Ted! I'm coming to you for help!"

"Of
course for Penny."

I
happened to like Penny Laker quite a lot. Not that we are old friends or even
new friends, but we do move about in the same circles and there have been
occasional opportunities for quiet conversations. I get invited to a lot of the
happenings in town. Not that I am one of them but more like, I think, a part of
the atmosphere. I'm a conversation piece, you see. This is Ashton Ford. He's a
psychic. He solves crimes. He can tell your future. Ask him about your career.
(That's always a big one, in this town.) Ask him how to improve your sex life.
(So's that one.) Ask him about cosmic sex. (Double bingo.)

Don't
wonder why I put up with that. The truth is that often I enjoy it. I'm human.
And it sure as hell improves
my
sex
life.

But
Penny Laker had never asked me to teach her cosmic sex, had never inquired
about her career, and always seemed too engrossed in the present moment even to
wonder about the future.

Fascination,
I guess, is the word. The lady had a fascination for the life processes—and
when we talked, we talked deep.

So
I told her prick of a husband: "Tell Penny to give me a call."

The
prick told me, "You can't be that dumb! You know

Penny!
She'd have a fit if she thought I was interfering with..."

"With
this new craziness! How the hell do I know what it is? Last year it was
trance-channeling, then it was the interdimensional whatever harmonic
convergence, then it was—listen!—she hasn't worked for six months, won't look
at a script, won't take calls from her agent! I'm crazy with this! I think
she's goddamn getting menopausal fits or something."

Not
unless she had awfully good plastic surgeons.

I
said quietly, "She couldn't be more than thirty-five."

He
growled, "You're a decade short, Ford."

I
was just playing at this point. I told him, “Then maybe you should be talking
to her gynecologist.”

He
said, "She doesn't
have
a
gynecologist. Doesn't have a family physician. Uses herbal remedies and meditation.
How the hell do I consult her spirit guides? Look, she's in trouble. She needs
help. I'm crazy with it."

I
thought, Well, maybe he is. Just because
I
never liked the guy didn't mean...

He
quickly replied, "Neutral ground. Meet me at the Polo Lounge at noon
sharp. I'll have a table."

I
agreed to that.

He
cranked the engine and drove away.

I
was standing at the curb and watching that departure with a curious feeling of
total detachment when I became aware of a low-pitched humming sound that seemed
to be coming from the darkness above the house.

I
swiveled about for a look just as a luminously glowing disc tilted up over the
rooftop and moved smoothly away in apparent pursuit of the departing car. I
guess my mind just sort of froze on that sight.

The
thing was about twelve feet in diameter and very thin except for a little
housing on top, and it really was not there long enough for me to shift into
objective mode and look for details.

I
just stood there gawking until car and disc disappeared into the darkness.

Funny.
I'd never really expected to see one. I still was not sure that I had.

But
I knew for damn sure that it was going to seem a long wait for that noon
meeting in the Polo Lounge.