Tags: #Will Never Be Enough 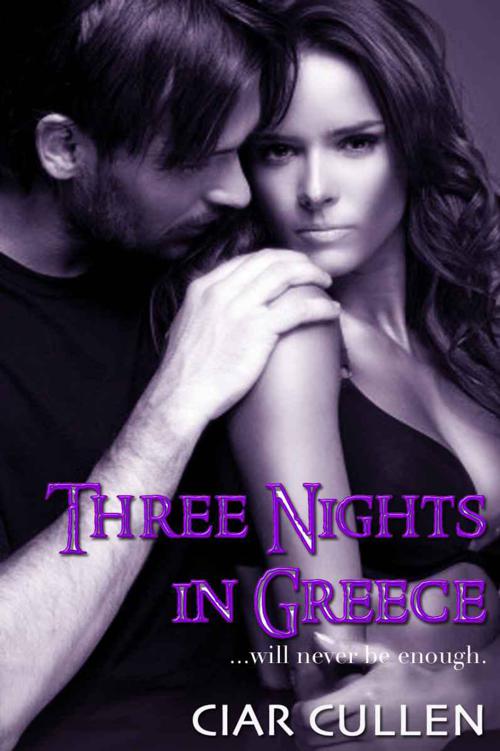 This book is a work of fiction. All names, characters, locations, and incidents are products of the author’s imagination, or have been used fictitiously. Any resemblance to actual persons living or dead, locales, or events is entirely coincidental.

No portion of this book may be transmitted or reproduced in any form, or by any means, without permission in writing from the author, with the exception of brief excerpts used for the purposes of review.

Other Books by Ciar Cullen

Fish Out of Water

All Ciar’s books are available for electronic signature on
Kindlegraph.com
. Ciar loves to hear from readers and other writers. You can contact her at [email protected], find her on Facebook and Twitter, or stop by and chat with her at
www.ciarcullen.wordpress.com
or
www.ciarcullen.com
.

“That one. I want
her
,” Kevin Colin declared as he tapped his index finger on the screen of his sleek laptop several times.

“Poor choice. She’s brilliant, but not a great actress—more accustomed to espionage. She’s new, just came on board about two months ago. I get the feeling…”

“Go ahead.” Kevin leaned back in his leather chair and chuckled lightly at his assistant. “No matter how good they are, you always find a flaw.”

Sarah folded her arms across her chest and sighed. She took a moment before answering, examining all the images of her newest recruit. “She’s still recovering from a job at the Agency, one that went bad. Thus her employment with us. I really wasn’t going to consider her for anything dangerous for a few more months.”

“How bad?” Kevin arched a brow.

“That’s bad.” Kevin looked again at the computer screen.
No, it has to be her
. “I’ll be there with her, every second. It will ease her back in. Besides, I know the man’s tastes. She fits this job like a glove.”

“Geez, Colin, she’s an agent, not a prostitute.” Sarah scowled at him.

“She looks like a prostitute.” He held up his hand to ward off Sarah’s attack. “Sorry, I know she’s on the job in these photos. Sit down, Sarah, you’re making me nervous. You have a bad habit of looking over my shoulder.”

Sarah took the seat across the huge mahogany desk and smirked.

“And you have a bad habit of questioning my judgment.”

Kevin laughed and ran his hand through his hair. “Agreed.”

He wondered for the hundredth time how he had ever managed without Sarah. The tiny, middle-aged black woman seemed a very unlikely agent. Which made her the perfect agent. She had lost her ex-military habit of calling him “sir” rather quickly, and they had become fast friends. And he relied on her judgment, utterly.
Then why are you ignoring it this time
?

“Pick someone else, Kevin.”

“Nope, trust me, curvy brunette. Or you can find me someone else. I know the man—this is what he’d want.” He tapped the photo again.
This is what
any
man would want
. Long legs, curvy hips, perfect full round breasts swelling above a low-cut top. And that cherry-red mouth, those dark chocolate-brown eyes. Very hot.

“I can see I’ve lost this one. I thought you put aside your libido when it came to work? That’s what I tell everyone. You’re really letting me down, boss. You’re going to have to walk her through it.”

“Tough job, but somebody’s got to do it. What’s her name?”

“Agency for five years. As I said, she went a little haywire after her last job with them. They were probably too structured for her anyway. Good with weapons, breaking and entering. But a rather poor actress,
as I said
. Very high IQ. Fluent in Spanish, French, German, Arabic, but no Greek. Good sense of humor. And then, of course, men seem to want her the second they lay eyes on her. Wait until you see the 3-D version. I think she’ll do well, it’s just a little too soon…”

“Nice catch, Sarah. You’re the best recruiter in the business. Talk to her. A hundred, half up front.”

Sarah nodded and made a few notes. “You can stop salivating now,” she called over her shoulder in parting as she left his office.

He laughed, shutting down his laptop. “There goes that raise.”

A hundred thousand
. Layla stared at the ceiling, wondering how it would feel to see a check with five zeroes on it. No, seven, if you counted the pennies. Seven zeroes. Of course, I might die before I get to cash it, she thought, wondering if she could will it to someone. If it were like the Munich job, she’d die of boredom. If it were like Qatar…

“And of course, you’ll have to meet immediately with Mr. Colin. This Ardros is a bit tricky,
not
to be underestimated.”

“I won’t sleep with him. Ardros, I mean. I’ll make him believe I will, but I won’t,” Layla stated emphatically.

Sarah nodded. “Of course! That goes without saying. Ms. Swann.”

“Layla, I’ve read the file on Qatar. Perhaps it’s a little soon and you’d like to stay closer to home? I could speak to Mr. Colin again— he wouldn’t hold it against you, I’m sure.”

“No, please. I’m ready. It’s not relevant.” Layla squeezed her eyes shut for a few seconds, forcing away the quick jolt of pain as the memories flooded back. “Tell me more about this job. I’ve heard Colin’s a ball-buster. What’s involved in the training?” she asked, focusing on the job at hand to change the subject. “I’m still tired from Munich. Not much fun sitting in a car for ten days. What a bust.”

“That bad lead wasn’t your fault. Of course, Mr. Colin understands that and he won’t take it out on you. He’s demanding, but fair.”

“He’s the devil himself, isn’t he, Sarah? You’re devoted to him, though, so you’ll never admit it. I know your type—brilliant, underpaid, overworked and overlooked.”

Sarah howled with laughter. “Brilliant, yes. Underpaid and overlooked, hardly. And yes, I’m devoted to Kevin and the firm. Layla, you’ve been sorely misinformed. Kevin’s not a ball-buster, honestly. He pays well and expects the best from his best detectives. You have the makings to be one of the best.”

Layla sat up straight.
Don’t blow this. The past is the past
.

Sarah smiled. “Relax, no offense taken. Don’t believe everything you hear, especially from within the ranks. Not everyone is at your level, and there’s going to be jealousy.”

Layla smiled and nodded. “Thanks. For everything, Sarah. For taking me on, suggesting me for this job. You won’t regret it.”

“Actually, Kevin picked you personally, so you can thank him yourself.” She grabbed her coat, made her way to the door, and then turned in mid-stride. “Woman to woman—watch yourself, Ms. Swann. Kevin and his female employees…well he has a tendency to, hmmm…”

“What? He’s not one to take advantage of his position? Because if he thinks—”

“No, no, no. In fact, quite the opposite. He’s had to let some employees go because they…well…developed crushes on him, shall we say? And that’s being kind. He never, ever, mixes business and pleasure. Never mind, you’ll make your own judgment. Just don’t be late. Kevin doesn’t tolerate tardiness.”

Sarah smiled and left the apartment.

Layla glanced at her watch. Despite the hour, she decided she had to have a cup of coffee immediately or die. She knew she was taking a risk. “Kevin doesn’t tolerate tardiness,” she repeated to herself as she ran into the coffee shop.

She felt more nervous by the minute as a young couple in front of her took their time ordering elaborate coffee concoctions. Layla tapped her foot and glanced around, hoping someone else would speak up and speed things along. Then she saw the man in line next to her, his stare searing into her like a knife. She turned to ask him to curb his rudeness. And froze.

Six feet tall, black artfully-disheveled hair, bright blue eyes, and a mouth that screamed “kiss me.” Her mother would have called him “black Irish.”
Damn
. Still, he was staring a little rudely, and she wasn’t one to give a man a break, even one this hot.

“Hello,” he said softly with a slight smirk.

Layla jumped, not expecting him to speak. “Yes, hello. Whatever.” She turned to the counter girl. “A double, tall, grande, or whatever the hell you call it. The big one. With room for milk.” She turned back to Irish. “Whatever happened to small, medium, and large?”

His eyes grew huge and she thought they actually twinkled. At the lack of response, she shrugged and began preparing her coffee.

“Let me do that.” To her astonishment, his voice actually sang in an Irish lilt. He took the sugar packets from her hand and ripped off the tops, pouring them in and stirring. He threw in a dash of cinnamon without asking if she wanted it.
Weirdo
.

“Well, thanks, very kind. Gotta go.” Layla started toward the door and stopped cold. She could feel his stare, the sensation prickling her back between the shoulder blades. She walked back to him, pulled a pen from her portfolio, and wrote her number on a napkin.
How could you be so stupid
?
A stranger, and in New York. It’s a wonder I survived two months despite my training. Maybe he slipped something into my coffee. Nah, I would have noticed
. She held out the napkin.

He warded it off with a raised hand and a shake of the head. “No need. I already
have
your number.” He grinned slightly before turning to the counter. Layla watched as he placed his order, ignoring her completely as he did so.

Okay, so he’s gorgeous and odd, and either attached or gay, probably an actor or model. A shame
.

Layla sighed in regret. “Have a nice life,” she cheerfully called over her shoulder, meaning it, as she left the coffee shop. After checking her watch again, she ran the remaining three blocks to the office. “Go time, Layla!”

“Mr. Colin should be here shortly.” The secretary smiled and idly tapped his pen on a pad. This one is definitely a struggling actor, Layla thought. He was young, maybe twenty-two, handsome in an all- American kind of way, with a bright practiced smile. He ran his hand through his short blonde hair and Layla imagined he was constantly aware of how he appeared to others.

She smiled back and took a seat, hugging her portfolio to her chest. “Have you worked for Mr. Colin long, Mr.…?”

“Spencer. Tristan Spencer. This is my third month. Made it past the probationary period.” He looked a trifle embarrassed. “Not that there was really any question.”

Poor kid, she thought. He doesn’t do a thing all day except watch Colin come and goes. Sarah does the real work. The kid’s window dressing and he doesn’t even know it.

Tristan nodded uncertainly. “Yes, it can get busy.” He rearranged the few items on his desk, folding a newspaper and shoving it into a drawer. “Kevin—he has me call him Kevin—depends a good deal on me to keep things rolling.”

“I imagine you have to do personal errands, too? Most assistants get pulled into around chauffeuring the kids, picking up gifts for the wives…”

“Oh, well, there’s only Molly, and she’s in daycare. Kevin takes her before work.” He looked at the clock. “That’s why he comes in a little late.”

Footsteps sounded in the hallway.

“Oh, here he is, right on time.” Spencer smiled as Kevin Colin opened the door, briefcase and latte in hand.

The Fatal Englishman by Sebastian Faulks
As if by Magic by Dolores Gordon-Smith
Wolf Pack by Crissy Smith
Only Mine by Susan Mallery
Vampire Blood by Kathryn Meyer Griffith
Patriotas by James Wesley Rawles
Goodbye Ruby Tuesday by A. L. Michael
Memories of Love by Joachim, Jean C.
First Time: Ian's Story (First Time (Ian) Book 1) by Abigail Barnette
Theirs by Eve Vaughn