Read They Never Looked Inside Online

Tags: #They Never Looked Inside

They Never Looked Inside 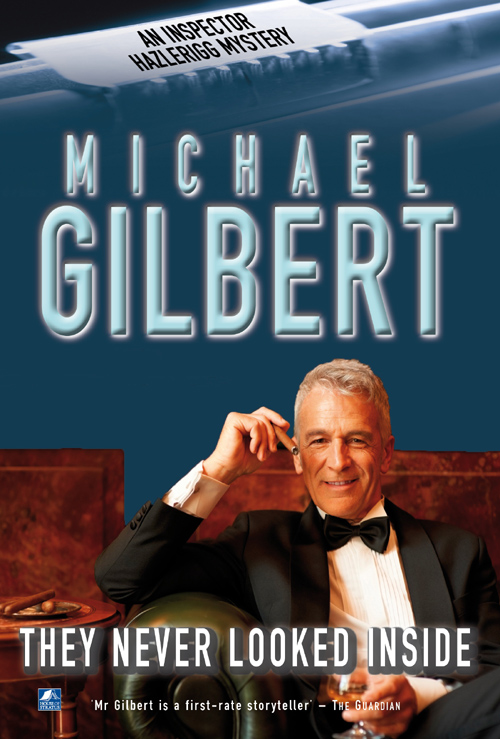 They Never Looked Inside

The right of Michael Gilbert to be identified as the author of this work has been asserted.

This edition published in 2012 by House of Stratus, an imprint of

This is a fictional work and all characters are drawn from the author’s imagination.

Any resemblance or similarities to persons either living or dead are entirely coincidental.

Born in Lincolnshire, England, Michael Francis Gilbert graduated in law from the University of London in 1937, shortly after which he first spent some time teaching at a prep-school which was followed by six years serving with the Royal Horse Artillery. During World War II he was captured following service in North Africa and Italy, and his prisoner-of-war experiences later leading to the writing of the acclaimed novel
‘Death in Captivity’
in 1952.

After the war, Gilbert worked as a solicitor in London, but his writing continued throughout his legal career and in addition to novels he wrote stage plays and scripts for radio and television. He is, however, best remembered for his novels, which have been described as witty and meticulously-plotted espionage and police procedural thrillers, but which exemplify realism.

HRF Keating stated that
‘Smallbone Deceased’
was amongst the 100 best crime and mystery books ever published.
"The plot,"
wrote Keating, "
is in every way as good as those of Agatha Christie at her best: as neatly dovetailed, as inherently complex yet retaining a decent credibility, and as full of cunningly-suggested red herrings."
It featured Chief Inspector Hazlerigg, who went on to appear in later novels and short stories, and another series was built around Patrick Petrella, a London based police constable (later promoted) who was fluent in four languages and had a love for both poetry and fine wine. Other memorable characters around which Gilbert built stories included Calder and Behrens. They are elderly but quite amiable agents, who are nonetheless ruthless and prepared to take on tasks too much at the dirty end of the business for their younger colleagues. They are brought out of retirement periodically upon receiving a bank statement containing a code.

Much of Michael Gilbert’s writing was done on the train as he travelled from home to his office in London:
"I always take a latish train to work," he explained in 1980, "and, of course, I go first class. I have no trouble in writing because I prepare a thorough synopsis beforehand.".
After retirement from the law, however, he nevertheless continued and also reviewed for
‘The Daily Telegraph’
, as well as editing
‘The Oxford Book of Legal Anecdotes’
.

Gilbert was appointed CBE in 1980. Generally regarded as ‘one of the elder statesmen of the British crime writing fraternity, he was a founder-member of the British Crime Writers’ Association and in 1988 he was named a Grand Master by the Mystery Writers of America, before receiving the Lifetime ‘Anthony’ Achievement award at the 1990 Boucheron in London.

Michael Gilbert died in 2006, aged ninety three, and was survived by his wife and their two sons and five daughters.

A thin streak of grey across the darkness.

It was a cold blackness, but dusty, and Rod was plagued with the fear that he might break into the father and mother of all sneezes. He was watching the thin grey streak, as he had been watching it now for the past five minutes. It seemed like hours. The streak was vertical, not horizontal, and it represented the edge of a door standing two inches ajar. The door was at the top of a flight of stairs which ran down from the first floor to the half-landing. And the greyness was all that was left, at that distance and infiltration, of the electric light in the basement room where the caretaker sat.

A glow-worm came and went ten feet away, and Rod guessed that “Gunner” was using his pencil torch with discretion. There followed an interminable period of scratching. (Lock picking was all very well, he reflected, when done in the comfort and security of the back room, with friends to quiz and applaud. Even when you were blindfolded and had to work by guess and by God with a stop watch against you.)

A loud snap – the “lifter” had slipped again.

His thoughts ran on.

This was It. This was the real thing. This was a job. Which made things both easier and more difficult. More interesting, certainly. In the sixteen years of his life he had never known anything to touch it.

Another snap – disastrously loud. Gunner was certainly off form. It was Sunday night. No, wrong again, it must be Monday morning by now, and getting on, too. Without shifting his position he looked down at the watch on his thin wrist. The luminous paint was chipped and worn but he was able from practice to make it out. Half-past three already.

For some seconds now Gunner had been silent. The torch was out, so presumably he was using both hands, one for the “lifter” and one for the “shifter”. Came a slurring sound, quite unlike anything which had gone before, followed by a soft click.

Good; that meant the office door would open. Here it came, throwing a widening band of yellow down the passage. Rod was disconcerted for a moment, then remembered that the full moon must have swung over their heads during the hours they had sat in the darkness.

He could see Gunner quite plainly, outlined against the window, moving from side to side. He was working quietly, opening the drawers of the big desk.

The temptation became too much for Rod. He knew that his job was to stay by the landing door; but surely – the old fool in the basement must be asleep over his gas fire by now. He hadn’t made a move for more than three hours.

Rod moved into the office, stooping first, as he had been taught, to sight the furniture against the window. As he came up to Gunner’s elbow the pencil light came on again for a moment and he heard his companion draw in his breath.

A thin key, but in the one glance unmistakably a safe key. The little torch came into play again on the great flat green door of the safe, as Gunner, with his thick, workmanlike fingers, slid up the cover plate of the lock.

Two keyholes presented themselves, set like the hands of a clock showing twenty minutes to eleven.

Gunner slipped the key into the lower slot and pressed upwards.

He tried again – then, suddenly, put out all his surprising strength.

Rod saw the thin shank of the key bending and cried a warning.

Unconsciously both man and boy had dropped their former furtiveness and silence and were moving with an almost contemptuous freedom. The torch was never off now. Again, and then again Gunner bent and twisted the key. The sweat was pouring from the palms of his hands.

He took the key right out, waited for a moment and then slid it back. It went home with such a true, sweet feel that he knew it must be the right one. But shift it would not.

Then, as clearly as if they had been spoken behind his shoulder, the words came to him: “Never pull against the handle. Let the handle do its own work.”

He was cooler than Gunner now.

“Put your weight on the handle,” he said. “No, put your gloves on first.” The man pulled a pair of woollen gloves out of his pocket.

As Gunner tugged the great brass handle it moved appreciably. The key came through with a soft slurring noise and the safe door swung back.

It was at this precise moment that they heard the steps coming up the stairs.

Rod was frozen – only his stomach seemed to turn right over.

The footsteps were slow and unhurried.

Something registered in Rod’s brain and life flowed on again. It was the watchman, no doubt of that, but he hadn’t heard them. If he had heard them he wouldn’t be moving in that particular unhurried way. There was no time to shut the safe, so it had to be – the other thing.

His feet had carried him quietly back to his position behind the landing door.

He could hear the complaining whine and grunt of the old man’s breath as he came up the last flight. Grey streak had turned to yellow. He was carrying a torch, then.

Rod’s hand slid to his side and out of the cunning pocket came the cosh.

It was a beautiful little weapon, fashioned of closely woven net round a hard flexible core made with infinite care out of hundreds of scraps of tinfoil and silver paper. It had a thong to go round the wrist and a grip of smooth leather.

The watchman reached the last step and paused, regurgitated heavily, and opened the door.

It was a clumsy blow, for he was standing awkwardly, and the edge of the door had made sighting difficult. But it was heavy enough to be effective. The torch fell to the floor but did not go out. The man gave a grunt as though all breath had been driven from his body, and folded forward on to his knees.

Rod took a step back and a careful aim at the bowed neck. The deliberation with which he did this was delicious.

Then he bent down and reached to switch off the torch beside the figure, now still. As he did so he heard a quick patter of steps and most unexpectedly a little white dog came into view. It was a terrier, as old, and almost as asthmatic as its master. Plainly both puzzled and alarmed.

Rod was as completely at a loss as he had been master of the situation a moment before.