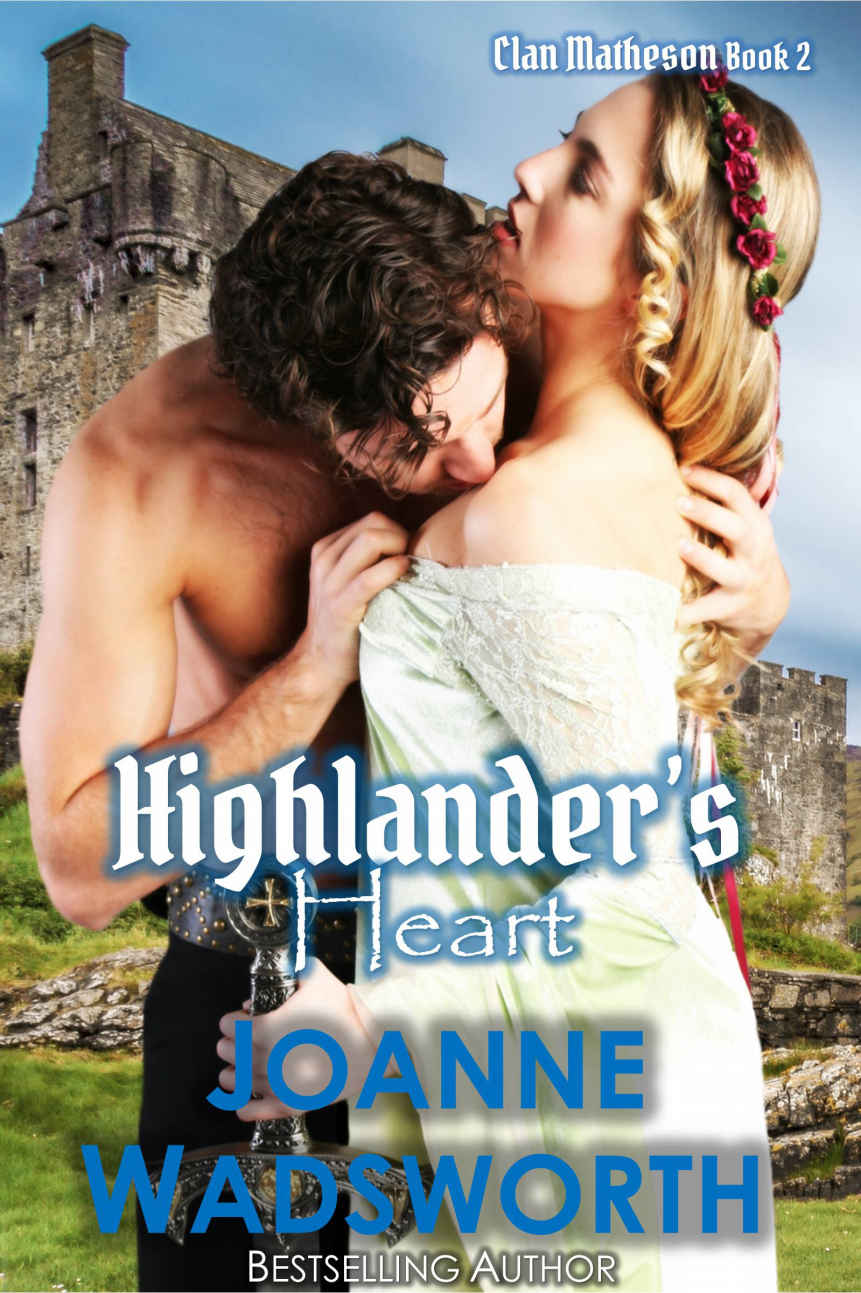 There can be only one…for both of them.

Fae-blooded Layla holds a fearsome battle skill, the ‘power of thought.’ She can levitate, move objects and people, and all with only a thought from her mind alone. Her skill is coveted by their allied clan, and when she comes of age, a marriage of alliance is agreed upon. Her betrothed is a fearsome warrior, the son of one of the greatest Highland chiefs, a man she holds no feelings for but intends to wed all the same.

Highlander warrior shifter Tor Matheson has traveled from the twenty-first century into the past in order to find the one woman who was always meant to be his. He awaits the night of the full moon, the one night when he should be able to sense who she is. Except only one woman draws him irresistibly in, the one woman who is completely and irretrievably forbidden to him. She is betrothed to another and if he wishes to claim her, he’ll need to come up against one of the greatest challenges ever thrown at him.

Plunged between two fierce warriors intent on claiming her, Layla must decide whether to allow duty to prevail, or to hand her heart over to the one man prepared to fight for it.

Never has there been such a battle for love.

A Prophetic Poem for Layla

In the twelfth century, a man named Gilleoin became the first and only known man to hold bear shifter blood, an ability gifted to him by The Most High One. His clan was called Matheson, and when he mated with a woman carrying faerie blood, they created a line shrouded in secrecy, a line that far into the future, now neared extinction…

The battlefield on the Isle of Skye, Scotland, 1187.

A heavy haze covered the night-shrouded forest on the edge of Loch Eishort where fae-blooded Gregor Matheson stood in his battle attire amongst his clan’s allied MacDonald warriors. The horn sounded the alert with one long and eerie blast across the bay, the watchman’s second signal the one they’d all been waiting for. Gregor, who held the revered ‘power of thought’ skill, fisted his great two-handed claymore as the heavy line of MacDonald warriors at his back snarled. He faced them, teeth clenched. “The MacKenzie comes, both your clan’s enemy and mine. Douse your torches and maintain a tight guard.”

Dunscaith Castle stood tall and strong on a low headland farther along the curve of the bay, the very castle they all defended. Candlelight glimmered from the tower windows of the MacDonald clan’s stronghold while the heavy swell of the sea crashed into the cliff-face and sprayed the fortified stone walls.

The Chief of MacDonald stormed along the bay toward their warrior party and halted before Gregor, his fury clearly riding him hard. “I willnae allow the MacKenzie to take Dunscaith. This is MacDonald land and will remain so.” The chief clasped Gregor’s forearm in a firm warrior hold. “Your fae skill will be needed this night, my friend. Aid where you can.”

“You’ll always have my aid and that of my clan’s. My chief, Gilleoin, sent me to you for a reason, and here is where I’ll remain until this battle is done.”

“Your ability and all that you can do shall remain safe between me and my men.”

“You’ve kept my secret for many years and I’ve no doubt you’ll continue to do so.”

“Aye, I shall. Moving things with your mind alone is an incredible skill, one I greatly admire and respect.” MacDonald eyed the white-capped waves rolling into shore, one hand raised to his brow as he tried to search through the eerie mist sweeping in. The thick white fog hazed the air and clogged the brightness of the full moon high above, allowing only the merest trace of light to penetrate through onto the MacDonald’s land. “I cannae see the MacKenzie and his men yet.”

“Allow me to check.” Gregor extended his fae senses out and caught their enemy’s approach. “They’re very close. We’ll be battling hard this night.”

“And it’ll be a battle we’ll win. You take the right wing, Gregor, and I’ll take the left. Our enemy will soon learn we’ll never allow another to defeat us, or to take what is ours.” MacDonald shoved his sword arm high in the air and bellowed, “All to arms. We fight this night, to rid us of our enemy and to hold our land. Let us take these blackguards down.”

A thundering roar boomed from the MacDonald’s men and reverberated all around.

Gregor swept past the line of fiercely scowling warriors to the right. Out at sea, the MacKenzie’s double-mast galley emerged from the mist, the vessel’s large square sail a ghostly white and their enemy on board slashing their oars through the tumbling waves. At the helm, a marksman stood with his bow and sent an arrow soaring. It arched high then swished down and thunked into the ground at Gregor’s feet. He hauled it from the sand, gripped both ends and snapped it in half over one knee. “Release the arrows,” he ordered.

Arrows whizzed over his head, flew high and one after the other, sliced downward and pinged off shields shoved high over their enemy’s heads.

The massive war galley caught a cresting wave, skimmed the waters into shore and as the hull scraped the sandy sea floor, a swarm of MacKenzies bounded out and barreled through the knee-deep waves.

“We take Dunscaith!” the MacKenzie chief shouted and surged forward with his men.

A blood-curdling battle cry tore through the stillness of the night, coming from both clans as warriors crashed together in a thundering roar.

Gregor focused his ‘power of thought’ on the enemy and where each of them battled. With his skill, he could unleash his mind and manipulate whatever he wished, send swords or even men flying. None would ever know what had hit them or whose hand it had been at, yet his fae skill was also a rare gift, one he treasured and used only when his life or one of his nearest and dearest was at stake. Battle he would, but commit outright murder, he wouldn’t.

“Be prepared to die!” A MacKenzie warrior swung his sword at Gregor and he heaved forward and met the warrior’s attack, their blades crashing together a mere inch from his nose.

“Stand down, or perish.” Gregor’s arms shook as he shoved one foot back and held his position.

“I will never stand down. I fight, to win this war and to take the MacDonald’s stronghold for our clan.” His adversary spat at his feet, his gaze venomous. “Your blood and that of every MacDonald here will soon soak this soil.”

“That will never happen.” With one flick of his hand, Gregor summoned his skill and whipped his enemy’s blade out of his hand then Gregor rammed into the warrior with one shoulder and took him down to the ground. The MacKenzie hit his head on a protruding rock and his eyes rolled to the back of his head. Gregor went down on one knee next to him, checked his breathing. He was alive, but well and truly out of it, and likely to stay that way. One down, so many more to go.

In the deadly dark, warriors fought and blood splattered and swirled within the murky wash of the incoming tide. The war raged and he fought on, not only for their allied MacDonald kin here on the Isle of Skye, but also to keep their enemy from bringing their war to his own Matheson clan’s shores across the sea. He’d never allow any harm to come to his kin or the woman he loved. Garia, his wife and soul bound mate, carried their firstborn child and he intended to return to her, just as soon as he could.

Slashing through the enemy’s ranks, Gregor bounded closer toward the MacDonald chief.

A fearsome MacKenzie warrior came at the MacDonald and the chief blocked the man’s swift blow. Their claymores clashed dead center and another MacKenzie warrior swung in behind the chief. Two against one. ’Twas a calculated attack, one that would weaken their defenses if they lost their chief so soon into the battle. Damn bloodthirsty MacKenzies. They owned such a large parcel of land along the western coastline of the mainland yet still they wanted more, would slay thousands of innocent people to gain the control they so heartily desired.

Gregor flicked one hand out and with his skill sent his allied MacDonald chief flying toward safety. Both the enemy warriors attacking him fell forward into the other, their blades sliding down each other’s and piercing their chests. Blood bubbled from the two warriors’ mouths as they toppled into a heap. An unfortunate death. One he couldn’t have halted with its sheer swiftness.

He raced to the chief’s side and together they bounded back into the melee and fought. The battle raged for hour upon hour and Gregor used his skill where he could until the midnight sky lightened and dawn approached.

Bodies littered the shoreline, at least four MacKenzie warriors having fallen to one MacDonald. He’d done his best to aid his allied clan during the skirmish, but he couldn’t have been everywhere.

“Retreat!” An ear-piercing whistle suddenly shrilled from one of the MacKenzie’s and their enemy all turned tail and raced back toward their galley.

Could it be over? With his sleeve, Gregor wiped blood from his face, his muscles aching and his body weary. Battling, using both his sword arm and his fae skill combined, had worn him out.

A shout went up from the MacDonald warriors as they chased the retreating MacKenzies, and the MacKenzies bounded into their vessel, rowed through the heavy swell and out of the bay.

Shouts of victory filled the air and the men surrounding him gathered their own injured and with them slung over their shoulders, marched back toward Dunscaith Castle and the healers who would be waiting to tend to their casualties.

“I thank you for your aid this day. We’ve won the battle.” The MacDonald chief grasped Gregor’s shoulder.

“That we have.” Relief filled him, although he didn’t doubt this would be one battle amongst many that he’d have to fight against the MacKenzie clan.

“Gregor, I also have a request. I want the power of your fae blood in my line and ask that you consider a betrothal between your firstborn child, the babe your wife now carries, and one of my own children.”

“I cannae promise a betrothal, no’ when so many of my fae kind are soul bound to another, but should my child no’ be mated to another, then aye, I will consider your request.” Such a marriage of alliance was one he too heartily desired. ’Twould bind clan MacDonald and clan Matheson together as naught else could.

“Then we shall speak again when the time is right.” Lips lifted, the MacDonald sheathed his sword while along the horizon, the sun rose.

A new day had dawned, one they now entered with victory on their side.

Gregor lifted his face high and gave thanks for the new day. Now, ’twas time to return to Garia and his clan. His soul bound wife would need him soon and he intended to be right by her side when she gave birth to their long-awaited child. The first child he hoped would be one of many.