There's Something About Lady Mary 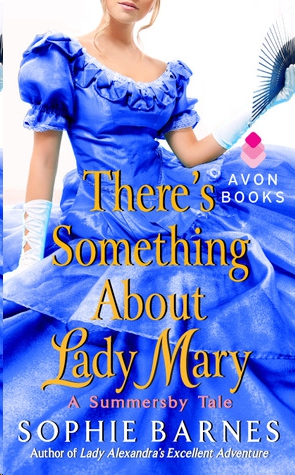 To my mother-in-law, who gave me my first romance novel—you’ve changed my life!

An Excerpt from
The Secret Life of Lady Lucinda

An Excerpt from
Three Schemes and a Scandal
by Maya Rodale

An Excerpt from
Skies of Steel
by Zoë Archer

An Excerpt from
To Hell and Back
by Juliana Stone

An Excerpt from
Midnight in Your Arms
by Morgan Kelly

An Excerpt from
Seduced by a Pirate
by Eloisa James

T
here was a time in the not so distant past when an Englishwoman’s fortune, social status, and every other aspect of her life were governed entirely by men. Not many exceptions to this situation existed, though there were some ways that a woman could be granted the freedom and independence that so many desired: becoming a peeress in her own right.

There were three ways in which to achieve this much sought after place in society, though just one that is of interest to you, dear reader:

A father could bequeath his title to his daughter by issuing a request to the king and Parliament. Once approved, the peerage would be reissued to the desired female heir by parliamentary and royal warrant.

Yet even if a woman did somehow manage to become a peeress in her own right, her property would still be written over to her husband in the event that she chose to marry.

M
ary stared in disbelief at the thin, little man who sat across from her behind the heavy mahogany desk. His hair had receded well beyond his ears, and his face was pinched. His eyes, lacking any definition due to his pale eyelashes, were set on either side of a nose that would have been perfect had it not been for a slight bump upon the bridge.

Mary watched quietly as he adjusted his spectacles for the hundredth time. She then posed the only reasonable question that she could think to ask: “Are you quite certain that an error of monumental proportions has not been made, Mr. Browne?”

In response to her question, Mr. Browne nodded so profusely that Mary couldn’t help but envision his head suddenly popping off his neck and bouncing across the Persian carpet that lay stretched out upon the floor. She stifled a smirk to the best of her abilities but feared that her eyes betrayed her. In any event, Mr. Browne did not look pleased.

“Quite certain, your ladyship. Your father was very adamant about his wishes, and as you can see for yourself,” he added as he handed her the final amendment to John Croyden’s will, “he made certain that there would be no doubt about his intentions. Indeed, it’s really quite plain to see.”

“So it is,” Mary muttered, still unsure of how to respond to the enormity of what her father’s lawyer had just told her. She leafed through the crisp white pages of her father’s last wishes before pausing at the one that bewildered her the most. There, right before her very eyes, was a petition made by her father and signed by none other than the Prince Regent himself. Her gloved fingers traced the outline of the royal insignia as she read the request: that John Croyden’s daughter, Mary, be made his sole heir and a peeress in her own right, inheriting all of her father’s worldly goods, including his title.

A half hour ago, Mary hadn’t even known that he had one. She’d grown up in a modest house in Stepney, a suburb of London where she doubted few aristocrats had ever set foot. The place had served as her father’s medical practice until she was old enough to accompany him on his never-ending travels, his constant companion in his quest for knowledge. Still, they’d kept that two-story house with its much-too-low ceilings and worm-eaten beams, returning to it whenever they happened to be passing through the city. It was home to her, yet here she now was, sitting in a lawyer’s office, smack in the middle of Mayfair. A part of her wanted to jump up and down with delight, while another, much stronger, part wanted to scream at her father for lying to her all of these years. As an image of his kind and honest eyes came to mind, she couldn’t help but wonder how he’d managed to keep something like this from her. It must have been a herculean effort. She let out a deep sigh of frustration. “You mentioned my father’s title,” she said, as she leafed through the pages. In spite of her efforts to make sense of it all, she was finding herself too distressed to focus. “Which title did he hold, if you don’t mind my asking?”

Mr. Browne looked momentarily startled. “Why, he was a marquess, my lady—of Steepleton, to be precise.”

Mary gave Mr. Browne a blank stare. “And that would make me what exactly?”

A couple of creases appeared on Mr. Browne’s forehead from out of nowhere. Clearly, he wasn’t accustomed to explaining the ranks of nobility to the daughters of his clients. He adjusted his spectacles once more. “It makes you a marchioness, my lady; not quite as prestigious a title as that of duchess perhaps, but more esteemed than that of countess, to be sure.”

“I see,” Mary said, though she was sure it was quite obvious she didn’t see at all. She’d never had the slightest interest in the nobility, least of all in understanding which titles outranked others.

Mr. Browne coughed slightly into his fist as if he hoped to somehow fill the silence that followed. “Shall we discuss the financial aspects of the will?” he eventually asked as he leaned forward to rest his folded arms on the desk.

Mary’s head snapped to attention at that question. “What financial aspects? My father was a man who made an honest living as a physician and later as a surgeon. He had a respectable income, but he was by no means wealthy. Even so, he did his best to set aside whatever he could for me, and I have legal rights to those funds. If you’re about to suggest otherwise, then I promise you that I will contest it in a court of law. Other than that, I don’t quite see what—”

“No. . .it is becoming increasingly clear to me that you obviously do not,” Mr. Browne blurted out.

Mary’s eyes widened with astonishment. She was momentarily taken aback by his remark, but quickly recovered, noting that he too seemed rather shocked. She said nothing, however, but merely watched as he leaned back in his chair and drew a deep breath.

“Lady Steepleton, I am not suggesting that you must forfeit any of the money that your father left you.” He spoke in a measured tone that told of more patience than he truly possessed. “I’m merely trying to inform you that your inheritance is substantially larger than you believe it to be.”

“How much larger?” Mary asked with a great deal of caution as she shifted uneasily in her seat. She twisted the coarse, graphite-colored cotton of her dress between her fingers and waited solemnly for Mr. Browne to continue, conscious of the fact that her simple appearance hardly made her look the part of an heiress.

“Lady Steepleton, your late father has left you with a sum of no less than fifty thousand pounds,” Mr. Browne announced, in a manner that might suggest that he himself was somehow personally responsible for her dramatic increase in wealth. “He has also left you with a very comfortable house on Brook Street, not to mention Steepleton House in Northamptonshire, which I gather is a rather large estate. Suffice it to say, you are now a very affluent woman, Lady Steepleton.”

Mary simply gaped at the man as if he’d sprouted a second head, a pair of horns, or perhaps even both. Her mouth had fallen open at the mention of the fifty thousand pounds, but by the time Mr. Browne was finished, her eyes felt as though they were about to leap out of their sockets at any given moment. “You must be joking,” she stammered, for want of anything better to say.

“I assure you that I am
not,
” Mr. Browne told her in a tone that conveyed just how offended he was by her suggestion that he might actually consider joking about such a thing. “I take this matter quite seriously, and as you can see for yourself, it is really quite plain—”

“To see,” Mary finished with a lengthy sigh as she stared down at the page to which Mr. Browne pointed. Sure enough, there was the indisputable bank statement valuing her father’s assets at just over fifty thousand pounds, including a brief mention of his properties. At the very bottom of the page was a quickly scrawled note, identifying the members of the staff who were currently employed at the two locations.