Read Goat Mother and Others: The Collected Mythos Fiction of Pierre Comtois Online

Goat Mother and Others: The Collected Mythos Fiction of Pierre Comtois 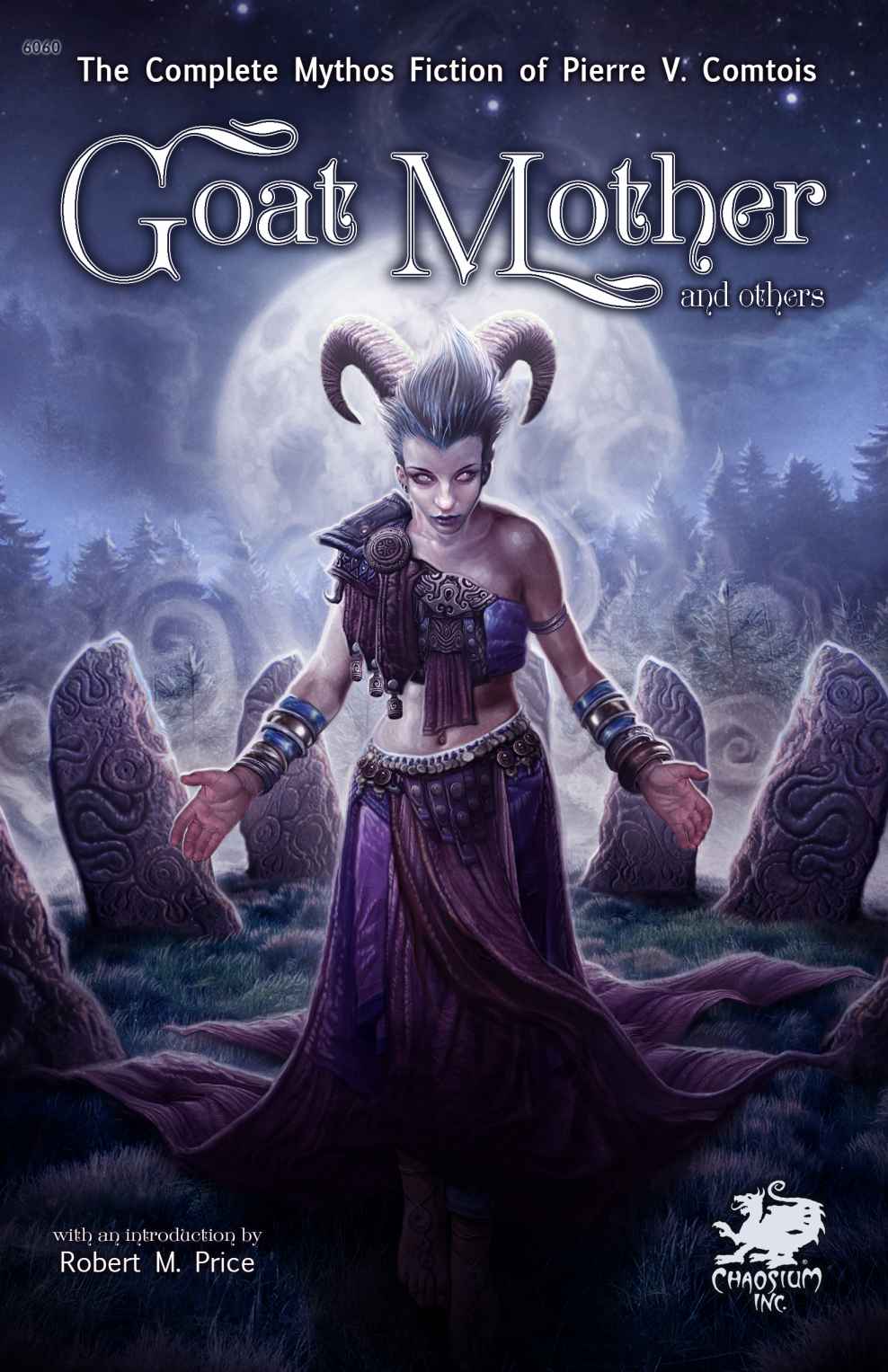 The Book of Eibon

Madness on the Orient Express
(New)

The Strange Cases of Rudolph Pearson
by William Jones

Tales Out of Innsmouth

Twice Upon an Apocalypse
(Coming Soon)

The Complete Pegana
by Lord Dunsany

Mysteries of the Worm
by Robert Bloch

The Terror & Other Stories
by Arthur Machen

The Three Impostors & Other Stories
by Arthur Machen

The White People & Other Stories
by Arthur Machen

The Yellow Sign and Other Stories
by Robert W. Chambers

Once Upon an Apocalypse

Goat Mother and Others:

The Complete Weird Fiction of Pierre Comtois
is published by Chaosium Inc.

This book is copyright as a whole © 2015 by Chaosium Inc.;
all rights reserved.

All other stories are original to this collection.

Similarities between characters in this book and persons living
or dead are strictly coincidental.

Printed in the USA

The Old Ones’ Signs

The Legacy of Acheron

Take Care What You Seek

The Country of the Wind

What the Sea Gives Up

Footsteps in the Sky

The King in Yellow

Masks of the Puppet Lord

A Question of Meaning

Thoughts on Lovecraft and his Mythos

elieve it or not, I wasn’t always interested in the Cthulhu Mythos. No, really! Before high school, my reading endeavors were divided mainly between science fiction and non-fiction (when I wasn’t reading Marvel Comics of course). By the time I did get to high school, it was the golden age of Edgar Rice Burroughs paperback reprints and it was from the back pages of one of those volumes that I discovered the wonders of the mail order form. Soon after, I latched onto J.R.R. Tolkien’s
Lord of the Rings
and became an avid reader of the
Conan the Barbarian
comic book which led me to the sword & sorcery worlds of Robert E. Howard whose work was also being massively reprinted at the time. Meanwhile,
LOTR
served as an introduction to the Ballantine Adult Fantasy Series all of whose volumes I devoured, but no doubt it was likely
Dream Quest of Unknown Kadath
and
The Spawn of Cthulhu
that first clued me in to H.P. Lovecraft. The real closer though, was Lin Carter’s
Look Behind the Cthulhu Mythos
with its appendix listing of nearly every Mythos tale written by the Lovecraft Circle and beyond. From that point on, I had to read everything there was and having exhausted what was immediately available in local stores and mail order, reached out to Arkham House for some of its super-expensive hardcover volumes including Lovecraft’s letters. For the first time, I felt compelled to read an author’s non-fiction output, his letters, essays, and articles—not just his fiction. And as a would-be writer, it wasn’t long before I had a yen to make my own contributions to the Mythos (following in the footstep of many other fans before and since). Of course, it took many years before I had any results that would be worth anyone’s time but with a self-imposed apprenticeship in my own small press mags
Fungi
and
Cthulhu Codex
, I managed to improve (if I do say so myself) to the point where other publishers began to search me out for contributions to their own projects. The results of those efforts (for good or ill; the reader will have to be the judge), spread over the last two decades, are contained in this volume.

By way of a few words about the stories in this collection (which are not necessarily presented in any published or compositional or chronological order), “The Secret Name,” “High and Dry,” “The Legacy of Acheron,” and “Masks of the Puppet Lord” are all unpublished with the first three having been written expressly for this collection and the last for an anthology that was to have been produced expressly for the Japanese market but never came to anything. “The Secret Name” features Dean’s Corners, located next door to Dunwich, which I’ve made the setting for many of my later Mythos stories. This might be insider baseball, but my conception of Dean’s Corners is based on the real life Massachusetts town of Groton (with next door Dunstable standing in very loosely for Dunwich). In fact, they fit the profile so well, I’ve often wondered if Lovecraft himself had those two towns in mind for Dean’s Corners and Dunwich?

“The Old Ones’ Signs,” “Take Care What You Seek,” (published as “Zombies From R’lyeh”), “Country of the Wind,” and “Footsteps in the Sky” first appeared in Chaosium’s
Tales Out of Innsmouth
,
Cthulhu Cycle
, and
Ithaqua Cycle
respectively, all edited by Robert M. Price.

Deadline by Randy Alcorn
Killing the Dead by Richard Murray, Richard Murray
Death On a No 8 Hook (A Willows and Parker Mystery) by Gough, Laurence
A Dangerous Liaison Part Five by Melanie Brooks
The Courtesan's Wager by Claudia Dain
French Toast by Harriet Welty Rochefort
The Troupe by Robert Jackson Bennett
The Dorset House Affair by Norman Russell
L. Frank Baum_Oz 12 by The Tin Woodman of Oz
Wolf (The Henchmen MC #3) by Jessica Gadziala