Read The Wind Through The Keyhole Online

The Wind Through The Keyhole 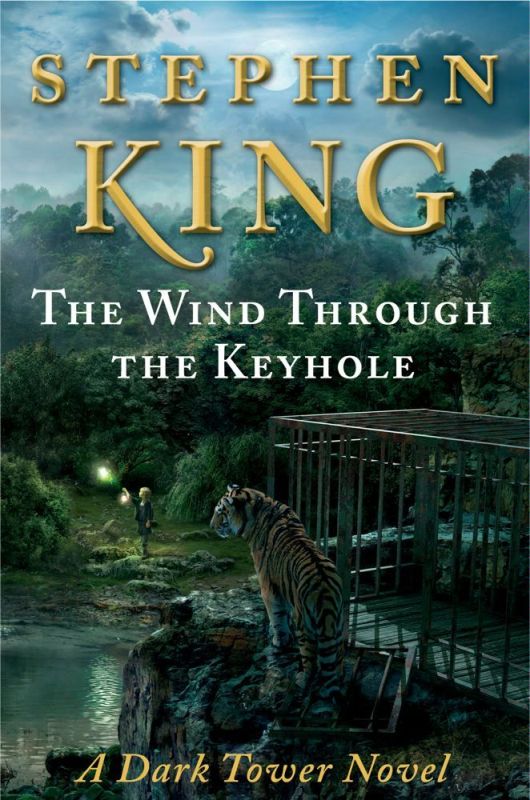 Thank you for purchasing this Scribner eBook.

Sign up for our newsletter and receive special offers, access to bonus content, and info on the latest new releases and other great eBooks from Scribner and Simon & Schuster.

In
The Wind Through the Keyhole
, Stephen King
returns to the rich landscape of Mid-World,
the spectacular territory of the Dark Tower
fantasy saga that stands as his most beguiling
achievement.

Roland Deschain and his ka-tet—Jake, Susannah,
Eddie, and Oy, the billy-bumbler—encounter a
ferocious storm just after crossing the River Whye
on their way to the Outer Baronies. As they shelter
from the howling gale, Roland tells his friends not
just one strange story but two . . . and in so doing,
casts new light on his own troubled past.

In his early days as a gunslinger, in the guiltridden
year following his mother’s death, Roland is
sent by his father to investigate evidence of a murderous
shape-shifter, a “skin-man” preying upon the
population around Debaria. Roland takes charge of
Bill Streeter, the brave but terrified boy who is the
sole surviving witness to the beast’s most recent
slaughter. Only a teenager himself, Roland calms the
boy and prepares him for the following day’s trials by
reciting a story from the
Magic Tales of the Eld
that
his mother often read to him at bedtime. “A person’s
never too old for stories,” Roland says to Bill. “Man
and boy, girl and woman, never too old. We live for
them.” And indeed, the tale that Roland unfolds, the
legend of Tim Stoutheart, is a timeless treasure for
all ages, a story that lives for us.

King began the Dark Tower series in 1974; it
gained momentum in the 1980s; and he brought it to
a thrilling conclusion when the last three novels were
published in 2003 and 2004.
The Wind Through the
Keyhole
is sure to fascinate avid fans of the Dark
Tower epic. But this novel also stands on its own
for all readers, an enchanting and haunting journey
to Roland’s world and testimony to the power of
Stephen King’s storytelling magic. 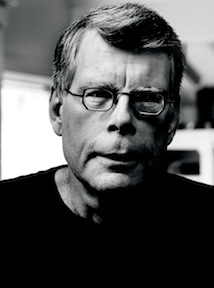 S
TEPHEN
K
ING
is the author of more
than fifty books, all of them worldwide bestsellers. His most recent include
11/22/63
, named a top ten book of 2011 by
The New York Times Book Review
;
Full Dark, No Stars
;
Under the Dome
;
Just Past Sunset
; and
Lisey’s Story
. He lives in Bangor,
Maine, with his wife, novelist Tabitha King.

MEET THE AUTHORS, WATCH VIDEOS AND MORE AT

•
THE SOURCE FOR READING GROUPS
•

The Dark Tower I: The Gunslinger

The Talisman
(
with Peter Straub
)

The Eyes of the Dragon

The Dark Tower II: The Drawing of the Three

The Regulators
(
as Richard Bachman
)

The Dark Tower V: Wolves of the Calla 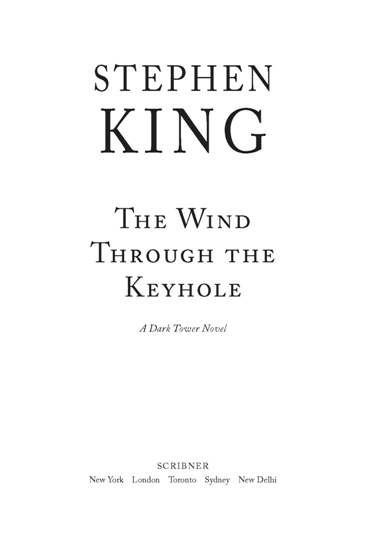 All rights reserved, including the right to reproduce this book or portions thereof in any form whatsoever. For information, address Scribner Subsidiary Rights Department, 1230 Avenue of the Americas, New York, NY 10020.

SCRIBNER
and design are registered trademarks of The Gale Group, Inc., used under license by Simon & Schuster, Inc., the publisher of this work.

This is for Robin Furth,
and the gang at Marvel Comics.

The Wind Through the Keyhole

Many of the people holding this book have followed the adventures of Roland and his band—his ka-tet—for
years, some of them from the very beginning. Others—and I hope there are many, newcomers and Constant Readers alike—may ask,
Can I read and enjoy this story if I haven’t read the other Dark Tower books?
My answer is yes, if you keep a few things in mind.

First, Mid-World lies next to our world, and there are many overlaps. In some places there are doorways between the two worlds, and sometimes there are thin places, porous places, where the two worlds actually mingle. Three of Roland’s ka-tet—Eddie, Susannah, and Jake—have been drawn separately from troubled lives in New York into Roland’s Mid-World quest. Their fourth traveling companion, a billy-bumbler named Oy, is a golden-eyed creature native to Mid-World. Mid-World is very old, and falling to ruin, filled with monsters and untrustworthy magic.

Second, Roland Deschain of Gilead is a gunslinger—one of a small band that tries to keep order in an increasingly lawless world. If you think of the gunslingers of Gilead as a strange combination of knights errant and territorial marshals in the Old West, you’ll be close to the mark. Most of them, although not all, are descended from the line of the old White King, known as Arthur Eld (I told you there were overlaps).

Third, Roland has lived his life under a terrible curse. He killed his mother, who was having an affair—mostly against her will, and certainly against her better judgment—with a fellow you will meet in these pages. Although it was by mistake, he holds himself accountable, and the unhappy Gabrielle Deschain’s death has haunted him since his young manhood. These events are fully narrated in the Dark Tower cycle, but for our purposes here, I think it’s all you have to know.

For longtime readers, this book should be shelved between
Wizard and Glass
and
Wolves of the Calla
. . . which makes it, I suppose,
Dark Tower 4.5.

As for me, I was delighted to discover my old friends had a little more to say. It was a great gift to find them again, years after I thought their stories were told.

The Alpine Nemesis by Mary Daheim
A Prayer for the Dying by Stewart O'Nan
Willowleaf Lane by Thayne, RaeAnne
Lessons in Discovery by Charlie Cochrane
Taming the Moon by Sherrill Quinn
Days Without Number by Robert Goddard
Playing For Keeps by Weston, Dani
The Siren's Call (Fantasy, Science Fiction, Romance) (FORCED TO SERVE) by McDonald, Donna
Nightmares & Geezenstacks by Fredric Brown
Tangled by O'Rourke, Erica