Read The Triumph of Evil Online

The Triumph of Evil 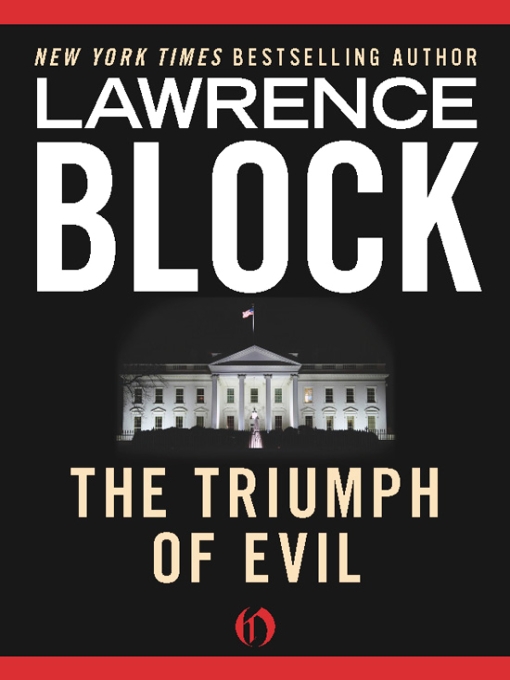 The Triumph of Evil

“Talk in French when you don’t know the English for a thing, turn out your toes as you walk, and remember who you are.”

“All that is required for the triumph of evil is for good men to do something wrong.”

A NEW AFTERWORD BY THE AUTHOR

A BIOGRAPHY OF LAWRENCE BLOCK

When the doorbell rang, he was sitting at the kitchen table drinking tea and watching baby birds. A pair of robins had nested in the eaves over the kitchen window. The eggs had hatched a week ago, and since then he had found himself spending hours at a time watching them. There was little drama in it, no cuckoo egg in the robins’ nest, no cats to be warded off, only the constant feeding and attendance by the parent birds and the steady growth and development of the young.

He set his cup down and went to the door, thinking that it would be the girl. “You’re early,” he said, drawing the door open.

There were two men on the step, and the taller man’s brow wrinkled at Dorn’s words. “Then you expected us?”

“And you are expecting someone?”

“Then we have time for a conversation,” the taller man said. “May we come in?”

He led them to the living room. The two sat on opposite ends of his couch, an empty cushion between them. Above and between their heads was a framed print, an English fox hunting scene. It had been there when he took the house, and although it was not to his taste he had decided against removing it. He liked its incongruity—this shabby southern town, this squat house of concrete block and stucco with its motel furniture and plasterboard walls, and this glorified representation of the unspeakable in pursuit of the inedible.

The smaller man lit a cigarette, and Dorn caught the odor of Turkish leaf. It triggered memories. Once all cigarettes had smelled thus.

The taller man said, “You were not expecting us; yet if our presence surprises you, you hide it well.”

“I am rarely surprised.” He wondered about the man’s accent. It was slight, and had echoes of no particular place, as if this man, like Dorn, had had frequent changes of nationality. The man had a broad forehead, dark brown hair slicked down, heavy brows, large nostrils, a dark and somewhat oily complexion. The smaller man, who had not yet spoken, looked at once Latin and Oriental, and yet was almost certainly not a Cuban Chinese. Dorn thought it likely that these men would have something to do with Cuba and hoped he was wrong. The smaller man had very precise features and flat dark eyes and small hands. Dorn had learned that men of this sort were usually quite good with knives.

“You expect the unexpected,” the tall man said.

“It was not overly difficult to find you. This is a pleasant town. Trees and flowers. Well-kept lawns. Children playing in the streets. Do you own this house?”

“It’s a common dream, don’t you think? A house of one’s own on a quiet street in a sleepy town. But dreams. Like smoke, easy to perceive and difficult to grasp firmly.”

“I do have an appointment.”

“Of course. It is your time that I am wasting, and I apologize. You will want to know who we are. My name is Vanders, Leopold Vanders. This is my associate, Mr. Robert Brown.”

“Ours as well. But more than pleasure, I think, for all of us. We have something for you, Mr. Dorn.”

His eyes stayed on Vanders but he concentrated on the smaller man, Brown, studying him out of the corner of his eye, looking for any sign of tension. If they meant to kill him, it would be Brown who would do the killing. He did not bother to wonder why they might want to kill him. Too many people had reasons of varying degrees of urgency. Dorn kept his eyes on Vanders and let his mind work out what his body would do if Brown moved or changed expression. Brown was at least ten and probably fifteen years younger than Dorn, presumably armed, and apparently in good condition. If they meant to kill him, Dorn thought, they would very likely succeed.

“A piece of work,” Vanders said.

“Do any of us ever really retire? I often wonder this myself. Dreams, you know. And smoke.”

“You’ll travel some. Meet with some people, assist in some arrangements. There’s a project planned. Nothing unlike things you’ve done over the years.”

“There’s a bit of money in it for you. A thousand now, just for a handshake. And more to come. A good deal more if things go well enough. A fair sum even if they don’t.”

“I have no need of money just now.”

“You could judge that better than I. My understanding is otherwise.”

Vanders nodded. “A problem. I could show you my driver’s license or a letter of reference from my pastor, but that wouldn’t be much help, would it? I might mention some names.”

“James Travis. Erno Vacek. Miller Harris.” These were names Dorn had used at one time or another. Vanders studied Dorn’s face and looked disappointed. “You are unimpressed?”

“I assumed you knew something about me. I haven’t been Miles Dorn long enough for you to come looking for me under that name.”

“Then you know a great deal about me. Still—”

“Other names. I might mention Gregorio Santresca, for example.”

“Does he know where you are? And would you want him to?”

Dorn considered this. “I don’t think he cares much. Santresca could probably find me himself if he wanted to. Why would he want to?”

“He has cause, I suppose. But if his mind works that way he has a long list, and I’d be nowhere near the top of it.” He got to his feet. “I don’t mean to be impolite, Mr. Vanders, Mr. Brown, but I am expecting someone. As you know. And I know nothing about you, I still know nothing about you, and I am not looking for work at the present time.”

“There is a letter. A letter for you. Robert has it. You might want to read it.”

Brown took the letter from his inside jacket pocket. He handed it carefully to Dorn, as if it were very important that the letter not be wrinkled. Dorn unfolded it. A dozen lines, handwritten on the letterhead of a Holiday Inn in Tampa.

He read it through twice and looked up, faintly puzzled. “All of this—money, names, veiled threats and allusions. All of that foolishness when you had something so much more persuasive at your disposal. I am assuming that this is genuine.”

“And not written under duress. And that I could verify it with no difficulty.”

“And yet you chose to hold it in reserve.”

“Not exactly.” Vanders smiled. It was a more open smile than Dorn had had from him. “You might regard the offers and threats as a test. If they had moved you, you would never have seen the letter or heard from us again. You understand? If money could buy you or threats coerce you, you would not be right for our purposes.” A flash of the smile again. “We only want that which it is most difficult for us to have. Some men strike this attitude with women.”

“Or with almost anything.”

He considered. “If Heidigger is a part of this, that does change things. In a fundamental way. Still—”

“And you are comfortable here?”

“I wonder, though,” Vanders said. “I wonder how much a man can decide whether or not he wants the sort of life that has been his. There is a saying to the effect that a man may change his shoes but must walk forever upon the same two feet. How much can we change ourselves, do you suppose? It is an interesting question.”

“I have thought often about it. Quite often.”

Brown lit another cigarette. Dorn felt an unaccustomed longing for tobacco. He had given it up almost two years earlier on a doctor’s advice, and couldn’t recall the last time he’d felt such an urgent craving for a cigarette. It amused him.

“This piece of work,” he said. “It would help to know more about it.”

“Is there CIA involvement?”

“In a sense. A community of interests on the part of some Agency people. You could call it that. Certainly nothing official. I believe you’ve worked with them in the past.”

“And at cross-purposes, on occasion.”

“Perhaps not.” He thought for a moment. “I presume you wish an answer, and that there is some sort of time factor involved. When would all of this begin?”

“You would talk to Heidigger tomorrow. As far as when your particular role would turn active, I couldn’t say.”

“Yes. I would have to think about this.”

“I have no phone. If I could reach you perhaps this evening.”

“We will be in transit, unfortunately. But there is a number you could call at nine-thirty tonight.” He took a blank memo slip from a leather case and uncapped a fountain pen and jotted down a number from memory. He waved the slip so that the ink could dry before handing it to Dorn. The numbers looked European, and the seven was crossed.

“The line is presumably untapped, but we take the usual precautions as a matter of course. Please call collect. As close to nine-thirty as possible.”

“What name shall I use?”

“Yes.” The two stood up abruptly, as if in response to a subtle signal. “I believe that’s all. Please call, wherever your thinking leads you. And I hope you’ll decide affirmatively. There is something I respond to in you. We could probably exchange some absorbing stories, you and I. Not that we ever will, but the capacity exists.”

As they reached the door, Dorn said, “The country in question wouldn’t be Cuba, would it? Because I wouldn’t want to be involved if it were Cuba. I really can’t work with those people.”

“No. Nor I, if it comes to that. Obviously I can’t tell you the country, but it’s not Cuba.”

“I suppose I would guess Haiti, if I were guessing.”

“You ought to be allowed one guess. Not Haiti. A more substantial country than Haiti, I would say. And that, actually, is all I will say. Good-day, Mr. Dorn.”

Their car was at the curb, a late Ford station wagon with Florida plates. Brown drove. Dorn watched the car disappear from view. He looked at his watch. She was late, which was as well. Just a few minutes late so far. He thought of canceling her lesson. Did he want company or solitude right now? It was hard to say.

Neither Cuba nor Haiti. It could, he decided, be any place at all. Africa, South America. He read a local newspaper on an infrequent basis and made no attempt to keep up with things. Not that this sort of affair would likely be predictable through published news stories.