Read The Society of Orion: The Orion Codex Online

The Society of Orion: The Orion Codex 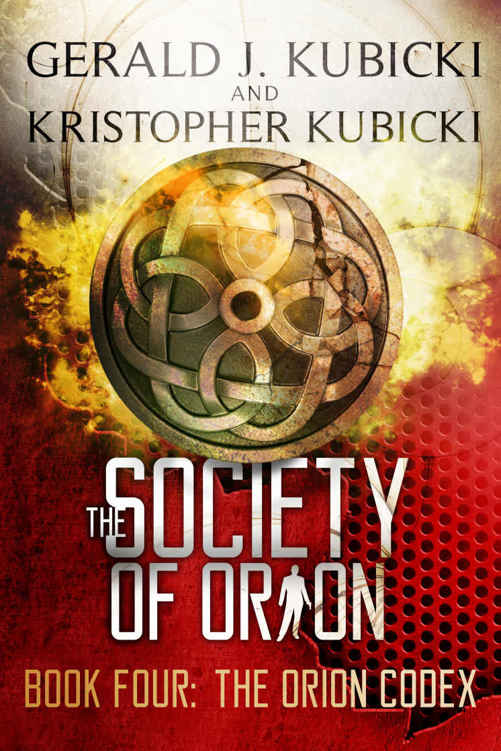 Other Books by Gerald J. Kubicki

The Society of Orion Series

This ebook is for your personal enjoyment.

It may not be re-sold.

The Society of Orion

This book is dedicated to Tom & Carol Taylor

The
Society of Orion

From Books One through Three

Colton Banyon and Loni Chen travel to Warsaw Poland to attend a dedication, but they are soon attacked and captured. They break free from confinement and discover that the head of The Society of Orion is behind their capture. They confront him at gun-point and he apologizes. He tells them he needs their help to recover fifteen lost Orion weapons. He also blames Banyon’s ancestor for the crisis.

The true head of the society is Wilk’s aunt who is currently in a hospital and drugged by a corrupt doctor paid for by Albin Wilk. Banyon puts a plan together to free her, but learns that she has her own agenda. Nothing is what it seems.

On the third day of their trip all the participants gather in the Banyon Arcades in the Polish Royal Castle. Each competitor believes that they will wind up with the Orion weapons, but Banyon and his crew have their own strategy.

In the end, Colton Banyon sets everything right and stops the North Koreans from gaining the weapons. Instead, he takes them for himself. Albin Wilk and his aunt are removed from The Society of Orion and Colton Banyon becomes the head of the Polish chapter.

The book ends with Colton Banyon wondering if he will have more dealings with The Society of Orion. He will.

“Lock down the building,” Colton Banyon screamed into his Bluetooth headset as he stepped out onto the small curved balcony outside his second story office. It overlooked the large reception area inside the Dewey & Beatem Law office building in Chicago. He heard an audible click just as he reached the railing. It indicated the lockdown was in progress. He looked down to see if anyone was attempting to leave the building by the front entrance. No one was there.

“We’ve got two intruders inside the building. We don’t know what they want or if they are armed,” Banyon informed everyone who was listening on their earphones connected to the communications system. The employees working at the firm were required to be connected to their Bluetooth devices while in the building. “I want two suppression teams to find them and detain them,” Banyon ordered.

“Go to red protocol,” Banyon now said. It meant that anyone near an open door was to close and lock it immediately. This prevented any intruders from finding places to hide.

“I’ve got them on my screen,” Steve chirped in after a few seconds “They are headed for the front door.” For the first time, Banyon was pleased that Bart, his former partner, had installed a very sophisticated security system in the building. The irony was that the constant surveillance by Bart had driven Banyon and his partner apart.

“Mandy, get away from the reception area,” Banyon now screamed into the Bluetooth. “They’re headed your way.”

“Leaving now,” a young voice yelled back into his Bluetooth.

“Loni lock my office door,” he additionally ordered as he looked back into his office where Loni Chen and Maya Patel stood over his computer screen with stunned looks on their faces. Timmy, the office geek, was seated at Banyon’s desk. A look of confusion surrounded him as well.

Banyon was just turning back to the front when he heard, “Oops.” He recognized the flash of naked thighs as Mandy slammed into him with her skirt hiked up immodestly. They both fell to the ground with Mandy straddling his bigger body. Mandy was twenty-two and Banyon was sixty-two. The collision hurt him more than it hurt her.

“I’m so sorry,” the young girl proclaimed. “I didn’t expect you to be waiting to greet me.”

“I wasn’t,” Banyon replied grimly as he grunted and tried to push the tiny woman off of him. Mandy was very athletic and sometimes just leaped up onto the baloney from the reception desk rather than use the long hallways of the building. He had watched her many times as she gracefully high-hurdled the four-foot railing, but he had never been in front of her before.

“Oh, no,” Mandy wailed, “now Loni is going to
kill
me.” She quickly jumped to her feet and put her fist to her mouth in horror.

Loni Chen was Banyon’s long-term companion and was insanely jealous of any woman touching or flirting with Colton Banyon, especially the perky Mandy, who she saw as a younger version of herself. She had threatened Mandy with bodily harm and the loss of her job if she caught her tempting Banyon again. That had been only a few months earlier when they were working on a case in Warsaw. Mandy had promised to change and had begun to grow her blond hair and wear adult non-seductive clothes. To Banyon she still looked fourteen.

“Quickly,” Banyon uttered. “Help me up.” He extended his arm and Mandy pulled him to his feet. They ran inside before Loni returned from locking the office door. Both Banyon and Mandy were grateful that no one had noticed their encounter.

“The intruders have locked themselves in the main conference room on the first floor,” Steve announced into everyone’s earpiece. “We managed to lock the front door before they got out.”

“Is there another way out of the conference room?” Banyon asked.

“Not unless they can cut through bullet-proof glass,” the security expert replied.

“Draw some guns from the armory and have guards posted at the door until I get there,” Banyon said.

“We’re on our way,” Steve replied.

“The rest of you stay in your offices until further notice,” Banyon broadcasted to the other employees.

Maya grabbed Banyon by his arm. “What’s going on?” Maya and Loni did not have Bluetooth devices.

“I’m not sure yet,” Banyon responded. “All we know so far is that Edgar let two people into the secure area of the building.”

“Yes,” Banyon responded. “And the email came from his office.”

“He tried to hide the source by bouncing it off several satellites,” Timmy the resident geek said. “But I found it. I’m the world’s best hacker, you know.” Timmy had been called up from the bowels of the building to trace the source of the email on Banyon’s computer. He was the only one in the room who was not a member of Banyon’s unique team, but he often helped.

“I never trusted him since Poland,” Maya shouted out hotly.

“We don’t know how he is involved yet,” Banyon warned his companion. “I need to go find him and find out what he knows before we pass judgment.”

“But the email is a big threat to all of us,” Loni argued. “I want to go with you Colt.”

“You’re staying here for now,” he responded strongly. “At least until we find out what’s going on here. You know the ferret is afraid of you. You may have to question him later.”

“Steve I want two guards at my door now,” Banyon yelled into his communication device. “We will be looking for the ferret.”

“The ferret? Why?” Steve asked over his Bluetooth.

“Just do it,” Banyon ordered.

“He’s in his office,” Steve replied after a few seconds.

Mandy’s head was on a swivel as she turned from person to person. She had no idea what they were talking about. “What email?” she asked timidly.

“This is a big mess,” Maya uttered. “And this is just our first day as owners of the firm. What else could go wrong?”

The day had started with much hope and promise. Colton Banyon, Loni Chen, Maya Patel, Mandy Randall, Heather Vance and Steve Pellegrino had all gone to another law office in downtown Chicago. There they had met Bart Longwood and signed all the papers to transfer ownership of Dewey & Beatem & Associates to a new company. The new company was named Forever Ours, LLC and was owned by all of them and the rest of the Patel clan, Previne Patel, Pramilla Patel and Eric Grey. Maya had brought their powers of attorney from India.

The nine owners were all the members of Banyon’s team and held various amounts of the ownership. But Colton Banyon was the majority shareholder.

They then held a meeting. Colton Banyon was elected the Chairman of the Board. Heather Vance, who was the office manager, was named the President — Banyon wanted nothing to do with the daily tasks of running a business. Steve was made executive vice president.

At the meeting, they all agreed to consolidate the business. The law offices in Chicago and Las Vegas would stay, but the offices in Washington D.C., Dallas and Miami would be closed. Heather was charged with transferring people and closing the offices. She left directly from the meeting to begin the task. The group then went to the Chicago office to inform the employees.

Banyon told everyone that their future was bright. They had several large clients and would still do black-ops work for the government. The President had assured him of that. They then had a catered luncheon to get to know each other better.

After the luncheon, Loni wanted to see her new office. “Colt, where is my office?” she asked.

“Oh,” Banyon responded. “It’s right down the hallway from mine. You and the Patel clan will share Bart’s old office.”

“Of course, I’ll show it to you,” he replied with a smile. “But first I need to check some emails in my office.”

Maya had never been to the offices before and gushed at the plush furnishings. She was impressed with Colton Banyon’s décor and went around the room touching the pictures and accents. A smile covered her attractive mocha-colored face.

“My sisters will want to move in here when we get back from India,” she announced. The Patel clan was currently living in an old Palace in Northern India that was left to them by an aunt. They had to live there for three months before the terms of the will transferred it to them.

“Oh my God,” Banyon suddenly shouted out. He was sitting at his desk going through his emails.

“What is it Colt?” Loni quickly asked.

“I can’t believe it,” Banyon screamed.

Loni and Maya ran around the desk to see what he was complaining about. “Is it from a client?” Maya asked.

“This could
change
everything,” Banyon moaned. “Read this email.”

The two women leaned in close to see what was on the screen. The message said:

I know who you are. I am not your friend. I am your competitor. You must reach Cuenca, Ecuador in two days. I will tell you about the Orion Codex.

“Is this about The Society of Orion?” Maya asked. “The Orion Codex would be a great find.”

“It also would be good bait,” Loni commented.

“I’m afraid our hunt for weapons is not over,” Banyon replied.