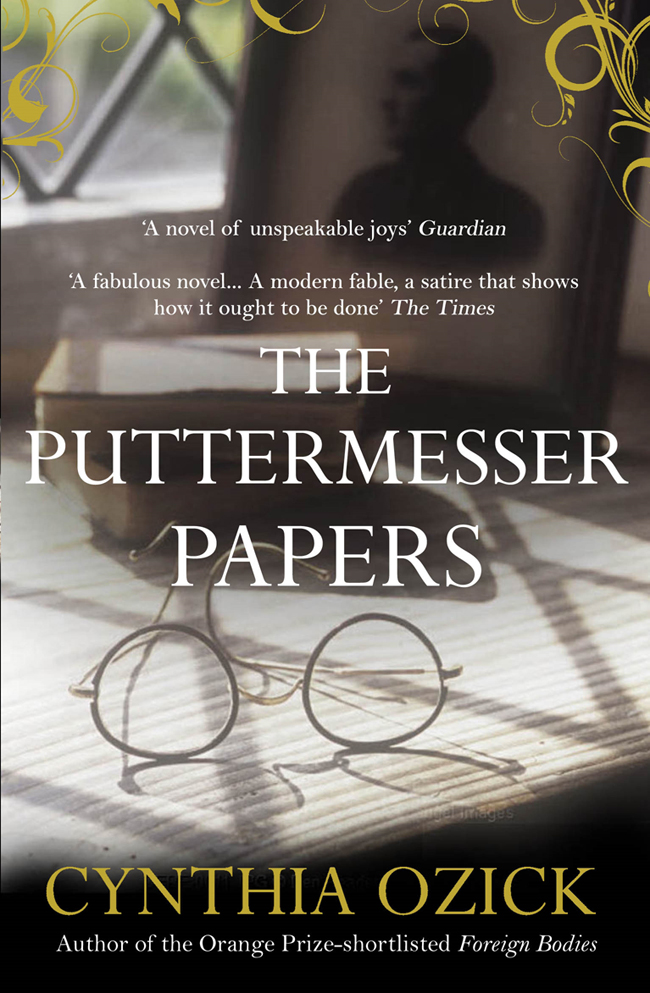 Heir to the Glimmering World

The Messiah of Stockholm

The Pagan Rabbi and Other Stories 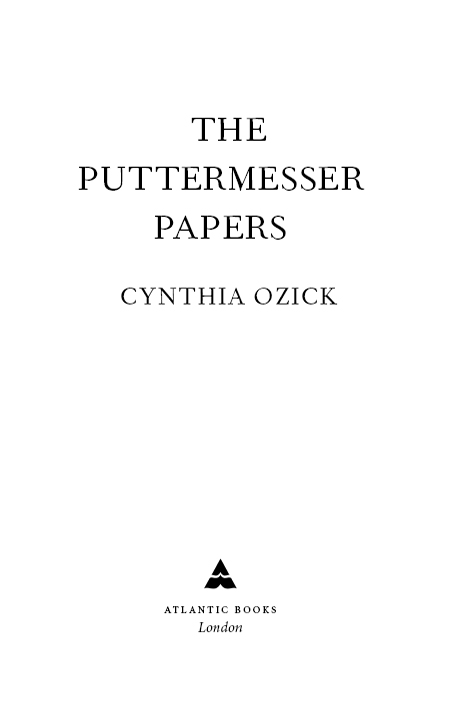 First published in the United States of America in 1997 by

This edition published in Great Britain in 2014 by Atlantic Books, an

The moral right of Cynthia Ozick to be identified as the author of this work has been asserted by her in accordance with the Copyright, Designs and Patents Act of 1988.

All rights reserved. No part of this publication may be reproduced, stored in a retrieval system or transmitted in any form or by any means, electronic, mechanical, photocopying, recording or otherwise, without the prior permission of both the copyright owner and the above publisher of this book.

This novel is entirely a work of fiction. The names, characters and incidents portrayed in it are the work of the author's imagination and not to be construed as real. Any resemblance to actual persons, living or dead, events or localities, is entirely coincidental.

An Imprint of Atlantic Books Ltd

Puttermesser: Her Work History, Her Ancestry, Her Afterlife

I. Puttermesser's Brief Love Life, Her Troubles, Her Titles

II. Puttermesser's Fall, and the History of the Genus Golem

V. WHY THE GOLEM WAS CREATED; Puttermesser's Purpose

IX. The Golem Destroys Her Maker

XI. The Golem Undone, and the Babbling of Rappoport

XII. Under the Flower Beds

I. An Age of Divorce

Puttermesser and the Muscovite Cousin

II. A Joke out of Moscow

Note on the Author

Flaubert does not build up his characters, as did Balzac, by objective, external description; in fact, so careless is he of their outward appearance that on one occasion he gives Emma brown eyes; on another deep black eyes; and on another blue eyes.

Her Ancestry, Her Afterlife

Puttermesser and the Muscovite Cousin

P
UTTERMESSER WAS THIRTY-FOUR
,
A
lawyer. She was also something of a feminist, not crazy, but she resented having “Miss” put in front of her name; she thought it pointedly discriminatory; she wanted to be a lawyer among lawyers. Though she was no virgin she lived alone, but idiosyncraticallyâin the Bronx, on the Grand Concourse, among other people's decaying old parents. Her own had moved to Miami Beach; in furry slippers left over from high school she roamed the same endlessly mazy apartment she had grown up in, her aging piano sheets still on top of the upright with the teacher's X marks on them showing where she should practice up to. Puttermesser always pushed a little ahead of the actual assignment; in school too. Her teachers told her mother she was “highly motivated,” “achievement oriented.” Also she had “scholastic drive.” Her mother wrote all these things down in a notebook, kept it always, and took it with her to Florida in case she should die there. Puttermesser had a younger sister who was also highly motivated, but she had married an Indian, a Parsee chemist, and gone to live in Calcutta. Already the sister had four children and seven saris of various fabrics.

Puttermesser went on studying. In law school they called her a grind, a competitive-compulsive, an egomaniac out
for aggrandizement. But ego was no part of it; she was looking to solve something, she did not know what. At the back of the linen closet she found a stack of her father's old shirt cardboards (her mother was provident, stingy: in kitchen drawers Puttermesser still discovered folded squares of used ancient waxed paper, million-creased into whiteness, cheese-smelling, nesting small unidentifiable wormlets); so behind the riser pipe in the bathroom Puttermesser kept weeks' worth of Sunday
Times
crossword puzzles stapled to these laundry boards and worked on them indiscriminately. She played chess against herself, and was always victor over the color she had decided to identify with. She organized tort cases on index cards. It was not that she intended to remember everything: situationsâit was her tendency to call intellectual problems “situations”âslipped into her mind like butter into a bottle.

A letter came from her mother in Florida:

I know you won't believe this but I swear it's true the other day Papa was walking on the Avenue and who should he run into but Mrs. Zaretsky, the thin one from Burnside not the stout one from Davidson, you remember her Joel? Well he's divorced now no children thank God so he's free as a bird as they say his ex the poor thing couldn't conceive.
He
had tests he's O.K. He's only an accountant not good enough for you because God knows I never forget the day you made Law Review but you should come down just to see what a tender type he grew into. Every tragedy has its good side Mrs. Zaretsky says he comes down now practically whenever she
calls him long distance. Papa said to Mrs. Zaretsky well, an accountant, you didn't over-educate your son anyhow, with daughters it's different. But don't take this to heart honey Papa is as proud as I am of your achievements. Why don't you write we didn't hear from you too long busy is busy but parents are parents.

Puttermesser had a Jewish face and a modicum of American distrust of it. She resembled no poster she had ever seen: she hated the Breck shampoo girl, so blond and bland and pale-mouthed; she boycotted Breck because of the golden-haired posters, all crudely idealized, an American wet dream in the subway. Puttermesser's hair came in bouncing scallopsâlayered waves from scalp to tip, like imbricated roofing tile. It was nearly black and had a way of sometimes sticking straight out. Her nose had thick, well-haired, uneven nostrils, the right one noticeably wider than the other. Her eyes were small, the lashes short, invisible. She had the median Mongol lidâone of those Jewish faces with a vaguely Oriental cast. With all this, it was a fact she was not bad-looking. She had a good skin with, so far, few lines or pits or signs of looseness-to-come. Her jaw was pleasingâa baby jowl appeared only when she put her head deep in a book.

In bed she studied Hebrew grammar. The permutations of the triple-lettered root elated her: how was it possible that a whole language, hence a whole literature, a civilization even, should rest on the pure presence of three letters of the alphabet? The Hebrew verb, a stunning mechanism: three letters, whichever fated three, could command all
possibility simply by a change in their pronunciation, or the addition of a wing-letter fore and aft. Every conceivable utterance blossomed from this trinity. It seemed to her not so much a language for expression as a code for the world's design, indissoluble, predetermined, translucent. The idea of the grammar of Hebrew turned Puttermesser's brain into a palace, a sort of Vatican; inside its corridors she walked from one resplendent triptych to another.

She wrote her mother a letter refusing to come to Florida to look over the divorced accountant's tenderness. She explained her life again; she explained it by indirection. She wrote:

I have a cynical apperception of power, due no doubt to my current job. You probably haven't heard of the Office for Visas and Registration, OVIR for short. It's located on Ogaryova Street, in Moscow, USSR. I could enumerate for you a few of the innumerable bureaucratic atrocities of OVIR, not that anyone knows them all. But I could give you a list of the names of all those criminals, down to the women clerks, Yefimova, Korolova, Akulova, Arkhipova, Izrailova, all of them on Kolpachni Street in an office headed by Zolotukhin, the assistant to Colonel Smyrnov, who's under Ovchinikov, who is second in command to General Viryein, only Viryein and Ovchinikov aren't on Kolpachni Street, they're the ones in the head officeâthe M.D.V., Internal Affairs Ministryâon Ogaryova Street. Some day all the Soviet Jews will come out of the spider's clutches of these people and be free. Please explain to Papa that this is one of the highest priorities of my life at this time in my personal history. Do you think a Joel Zaretsky can share such a vision?

Immediately after law school, Puttermesser entered the firm of Midland, Reid & Cockleberry. It was a blueblood Wall Street firm, and Puttermesser, hired for her brains and ingratiating (read: immigrant-like) industry, was put into a back office to hunt up all-fours cases for the men up front. Though a Jew and a woman, she felt little discrimination: the back office was chiefly the repository of unmitigated drudgery and therefore of usable youth. Often enough it kept its lights burning till three in the morning. It was right that the Top Rung of law school should earn you the Bottom of the Ladder in the actual world of all-fours. The wonderful thing was the fact of the Ladder itself. And though she was the only woman, Puttermesser was not the only Jew. Three Jews a year joined the back precincts of Midland, Reid (four the year Puttermesser came, which meant they thought “woman” more than “Jew” at the sight of her). Three Jews a year leftânot the same three. Lunchtime was difficult. Most of the young men went to one or two athletic clubs nearby to work out; Puttermesser ate from a paper bag at her desk, along with the other Jews, and this was strange: the young male Jews appeared to be as committed to the squash courts as the others. Alas, the athletic clubs would not have them, and this too was preternaturalâthe young Jews were indistinguishable from the others. They bought the same suits from the same tailors, wore precisely the same shirts and shoes, were careful to avoid tie clips and to be barbered a good deal shorter than the wild men of the streets, though a bit longer then the prigs in the banks.

Captured by Desire by Donna Grant
Bound by the Viking, Part 2: Compelled by Fawkes, Delilah
FoM02 Trammel by Anah Crow, Dianne Fox
The Echolone Mine by Elaina J Davidson
The English Patient by Michael Ondaatje
Robin Cook by Mindbend
Light from Her Mirror (Mirrors Don't Lie Book 3) by Becki Willis
Sweet Madness: A Veiled Seduction Novel by Snow, Heather
The Transmigration of Bodies by Yuri Herrera
How to Pass Numerical Reasoning by Heidi Smith