Read The Poetry of Sex Online

The Poetry of Sex 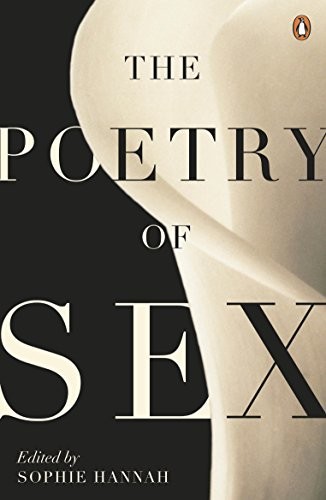 THE POETRY OF SEX
Edited by Sophie Hannah

The Elephant is Slow to Mate – D. H. Lawrence

On the Happy Corydon and Phyllis – Sir Charles Sedley

‘I, being born a woman and distressed’ – Edna St Vincent Millay

Eve to the Serpent – Catherine Smith

A Woman Waits for Me – Walt Whitman

‘If you were coming in the fall’ – Emily Dickinson

‘First, I want to make you come in my hand’ – Marilyn Hacker

He Asked About the Quality – C. P. Cavafy

3 ‘A night picked from a hundred and one’

And Looking Back – A. F. Harrold

The Man in the Print Room – Sarah Salway

On being in Bed with Your Brand-new Lover – Amy Key

Haikus to Fuck to – Leo Cookman

4 ‘All our states united’

The Day He Met His Wife – Peter Sansom

Putting in the Seed – Robert Frost

And So Today Take Off My Wristwatch – A. F. Harrold

An Epic in Me – Eva Salzman

In the Victoria Hotel – John Saunders

‘For each ecstatic instant’ – Emily Dickinson

‘Doing, a filthy pleasure is, and short’ – Gaius Petronius

The Marriage of Consonant and Vowel – Adam Horovitz

In Defence of Adultery – Julia Copus

The Dark Night of the Sole – Kit Wright

‘The expense of spirit in a waste of shame’ – William Shakespeare

To His Lost Lover – Simon Armitage

End of the Affair – Dan Burt

To His Coy Mistress – Andrew Marvell

Out of Office – Cora Greenhill

The Walk of Shame – Nikki Magennis

Can Clio Do More than Amuse? – Eva Salzman

To the Virgins, to Make Much of Time – Robert Herrick

To Her Ancient Lover – John Wilmot, Earl of Rochester

‘What lips my lips have kissed, and where, and why’ – Edna St Vincent Millay

On the French Riviera – Ian Pindar

If You are Lucky – Michelle McGrane

Whatever Happened to Sex? – Amorak Huey

There are two poems in this book about the actor Daniel Craig, and none about any other Hollywood star. While the situation with regard to rock and pop legends is a little (though not much) more equitable, with Mick Jagger and David Cassidy cropping up in one poem each, it is impossible to deny that, on the actor front, this anthology is heavily biased in favour of Daniel Craig over and above all others.

I draw readers’ attention to this feature of the book because I wouldn’t want anyone to imagine I’m unaware of it. Editors of poetry anthologies, like the judges of literary prizes, are often criticized for perceived imbalances of this sort. As a committed positive-discrimination enthusiast, when I saw that a weighting in favour of Daniel Craig was a risk, I tried to redress the balance by introducing an All-Tom-Cruise shortlisting policy, but then had to abandon it when I found not a single poem about Tom Cruise, which suggests that the teaching of creative writing has been woefully inadequate for the last twenty years, or however long it is since
Risky Business
came out.

All might be fair in love and war (though in fact it isn’t), but all is certainly not fair in sex. Nevertheless, Daniel Craig stranglehold notwithstanding, there is much diversity in this anthology – diversity of writers, of subject matter and of approach. I am happy to report that the two poems about Daniel Craig couldn’t be more different from one another. One, by a male author, has its narrator gazing lustfully at a photograph of Craig when he ought to be working. The lust is enthusiastic and uncomplicated. The other Craig poem, by a woman, deals with the problems and potential life wreckage associated with sleeping with the actor, even though the narrator doesn’t even like him and therefore has no desire to do so – or so she says.

It would be a mistake to conclude from this exhaustive study of two poems about Daniel Craig that women and men have radically different approaches to sex and that one is more straightforwardly
physical than the other. If this book suggests any kind of generalizable truth, it is surely that each writer’s experiences, psychological approach to those experiences and choice of words in expressing him- or herself are unique. Some female poets in this anthology have adopted what might be seen as a traditionally male attitude to sex, at least for as long as it takes to complete a sonnet, and could reasonably claim dual citizenship of Mars and Venus. One of my favourites included here, Edna St Vincent Millay’s ‘I, being born a woman and distressed’, has a narrator who wishes to make it clear in advance that, once the carnal frolics are concluded, she will no longer have any use for her sexual partner; she wants his body but has no interest in his mind.

Outrageous, you might say, particularly if you were a close friend of the man in question. Indeed, if one wanted to take umbrage on behalf of ill-treated sexual partners, there are many hapless victims of poets to be found among these pages, as well as authors and narrators (and authors posing as fictional narrators, as a convenient relationship-saving device), who have been exploited and crushed by cads, the emotionally illiterate, the pathologically narcissistic and the infuriatingly married of both sexes. There are poems here that might seem misandrist or misogynist – Irving Layton’s ‘Bicycle Pump’, for example, or Fleur Adcock’s ‘Madmen’ – which I have included because I am more interested in the ‘Is’ of sex than the ‘Should’. We all make sexist generalizations from time to time – often after sleeping with someone whom we perceive as typifying his or her gender. ‘Men!’ we cry, or ‘Women!’ We forget to qualify our derision with the prefix ‘Some’; sexual disillusionment and a sense of proportion are largely incompatible.

There are poems in this anthology written specifically to encourage people into bed and urge them not to take too long about it – Marvell’s ‘To His Coy Mistress’ being one brilliant example, and Wendy Cope’s ‘Message’ another. There are poems that take a cheerful and cavalier approach to sexual behaviour that many would regard as immoral, poems about fantasizing in the direction of one lover while being in bed with another, about continuing to use a partner’s body for low-level gratification when you know the relationship
is over but they don’t. There is a poem about getting a quick blow job in a car and then making a run for it, a poem celebrating illicit sex with colleagues in the office on the grounds that it makes the daily routine of ‘wives and work’ more bearable. Balancing out all of the above are the many poems about wholesome, committed, sanctioned sex that breaks no rules at all.

There was absolutely no moral weighting in the selection I made. To make this clear, I chose to name each chapter of the anthology after a line from one of the poems it contains, rather than use titles such as ‘Married Sex (Holding Society Together)’ and ‘Adultery (Poems by Slags and Home-wreckers)’; I liked the idea of the poets being represented in their own words not only in the poems they have written but even when it came to naming the section of this book in which they would eventually find themselves. There is something dangerous about trying to define another person’s sexual experience, and what might be seen externally as coming under the heading ‘Adultery’ could well feel more like ‘Life Support’ or ‘My One Chance of Happiness’ from the inside. It is hard to define without moralizing, and the constant attempts by many to force sex and morality together – an ineptly arranged marriage of two strangers, bound to end in disaster – often leads to absurdity. As I write this introduction, David Cameron is trying very hard to ban pornography that involves simulated rape scenes between consenting adults, even though many vocal intelligent women are waving copies of Nancy Friday’s
My Secret Garden
in the air and trying to tell their prime minister that, no, they do not wish to be raped, but that, yes, they do have rape fantasies, which are an entirely different thing and should not be banned or judged. It is possible that, by the time this anthology is published, the only sexual fantasies still legal in the UK will be those that feature Ed Miliband in conversation with a group of intersectionalist feminists who check their privilege every thirty seconds.

Meanwhile, in New York, married mayoral candidate Anthony Weiner is busy being solemn and contrite at press conferences after being caught ‘sexting’ a woman who is not his wife, attaching
pictures of his private parts and calling himself ‘Carlos Danger’ (which imaginative and rather sweet alias will, I hope, win him at least a few votes – particularly when one considers that Carlos Danger is an anagram of Roger Scandal, and that Roger Scandal would make a great pseudonym for a poet writing about sex).

Some, though not many, of the poems in this anthology are published under pseudonyms. Auden’s brilliant poem ‘The Platonic Blow’ was first published under another name because of its graphic portrayal of homosexual fellatio. Nowadays, fewer readers would be shocked by that, but when it comes to sex, however far societal norms progress in the direction of enlightened thinking, people will always have something to hide. Many won’t be quite sure why they need to keep their true sexual selves hidden, only that they must. For most of us, our sexual desires pose questions we cannot answer. C. H. Sisson puts it brilliantly in his poem ‘I Who Am’, one of my absolute favourites in this collection, so I will give the last word of this introduction to him, and hope that, wherever he is, he won’t be too shocked by his role as frontman of what I hope will be the raunchiest poetry anthology of the year:

So ask the body. It alone

Knows all you know, and it imparts

Little enough of what is known

To what we call our minds and hearts.

So fumbling bodies try to make

Friendship and love as best they can:

None ever was without mistake

And lies by woman and by man.

By man, and in a common bed.

Where is the rule which truly tries

What is done there by what is said?