Read The Passport in America: The History of a Document Online

The Passport in America: The History of a Document (6 page)

By 1782 the passport, although not a required document, was sufficiently recognized that the Continental Congress gave the recently created Department of Foreign Affairs the responsibility to issue passports in the name of the United States. They became the subject of legislation for the first time in 1790 when Congress passed a law that provided punishment for “the violation of safe-conducts or passports issued by the U.S.”
11
In the intervening eight years the adoption of the Constitution resulted in the Department of Foreign Affairs being renamed the Department of State. The earliest surviving passports issued in Washington, D.C., state the bearer is a citizen of the United States and request that he be allowed to enter foreign territories, freely move about as his “lawful pursuits may call him,” and subsequently be granted, if necessary, the aid and protection that the United States would give its citizens. There is no description of the bearer, nor is “his” signature on the document. It is instead signed by the secretary of state, for it is in form and intention a letter from the secretary to support a person in his travels (
figure 1.2
).
12

There are in fact extant U.S. passports that predate the ones issued in Washington, D.C. These were issued outside of the United States by representatives whom the fledging U.S. government had posted abroad from 1777. Notable among these are passports Benjamin Franklin issued while U.S. minister in France. Franklin printed these on his own press (
figure 1.3
). Not only did he use the text of passports the French government issued to its ambassadors, he kept the text in French. The passport requested free and safe passage for the bearer in his journey, acknowledging that any aid and assistance would be “as we would do in like circumstances for all those recommended to us.”
13
The issuing of U.S. passports abroad according to the practices of the host country was not unique 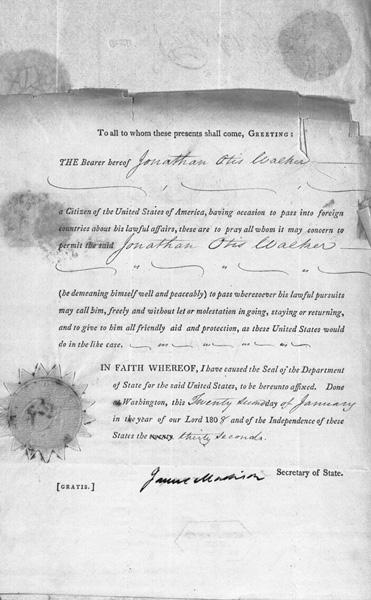 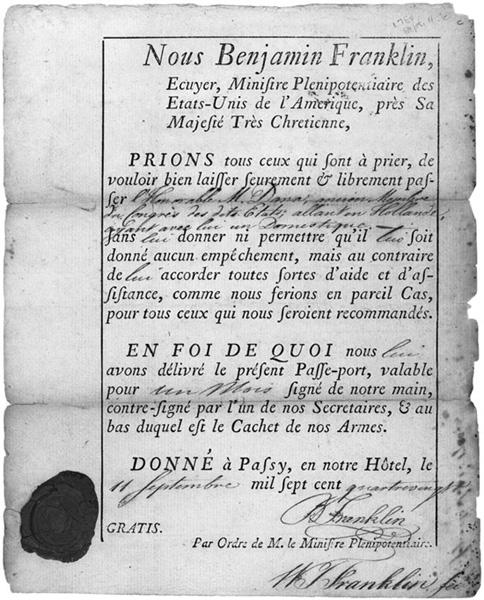 Figure 1.3. Passport issued by Benjamin Franklin in French in 1780 (Courtesy of the Massachusetts Historical Society).

to Franklin. Into the early decades of the nineteenth century U.S. officials abroad issued travel documents to U.S. citizens in a variety of forms; while some were technically what were then called visas, most were colloquially called passports (
figure 1.4
;
figure 1.5
).

In spite of the usefulness of bilingual documents for foreign travel the State Department only issued its passport in English. There was no law dictating
that this be the case; by the twentieth century officials justified this action on the grounds that the passport as the official statement of nationality had to be issued in what they considered the national language of the United States, though an exception was made for passports issued by U.S. consuls in China.
14
In the case of travelers in Turkey the department also acknowledged the limited usefulness of the U.S. passport. It sanctioned the validity of the travel document required by local law on the grounds of its familiarity over a passport: “It is probable that in Turkey the variety of languages and races to be found in her dominions renders a foreign passport, which is in a language utterly unintelligible to local officials in districts remote from Constantinople, much less efficient and useful in protecting travelers than a Turkish teskereh, with familiar languages, seals and signatures.”
15
Because many of the officials outside of China and Turkey that the secretary of state formally greeted also could not read English, the passport had to be both a document of recognition and a recognizable document. From at least the middle of the nineteenth century some State Department officials were apparently aware that, when presented with a passport in English, many foreign officials “simply look[ed] at the face of the passport” to “form an opinion of the character of the document by the emblems on the vignette and the seal.”
16
Thus the importance of the appearance of the passport to the establishment of its authority provided a challenge to the sole authority of the State Department to issue U.S. passports. To the casual observer, the mere presence of a seal or ornamentation made the document official, not the specific seal or ornamentation. This became a problem when most countries continued their wartime passport requirements into the 1920s. As one U.S. consul complained “any big official looking paper written in English and bearing a pretentious seal will pass with many foreign officials for a passport.”
17
Often such official looking papers were naturalization certificates or passports illegally issued by governors or mayors, but the document that caused the consul to make this comment was a membership card for the Philadelphia-based International Society for Collectors (
figure 1.6
). Although labeled a passport, this document bore little resemblance to a U.S. passport, yet a number of foreign officials had nonetheless affixed a visa to it during one member’s 1923 vacation in Europe; other documents purportedly accepted by “ignorant sentries” included a baggage transfer check from New York’s Grand Central Station and a ticket to the Polo Grounds.
18

The passport consistently remained a “big official looking paper written in English.” Its twelve-by-eighteen-inch size was not necessarily an asset to 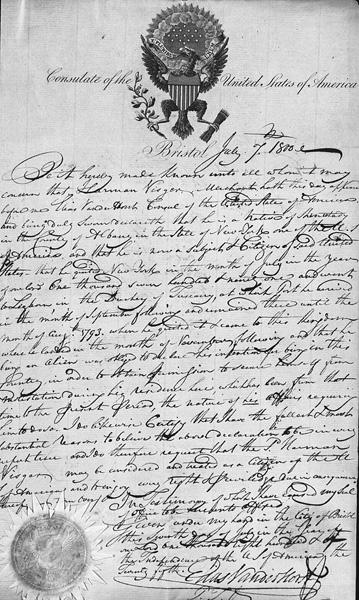 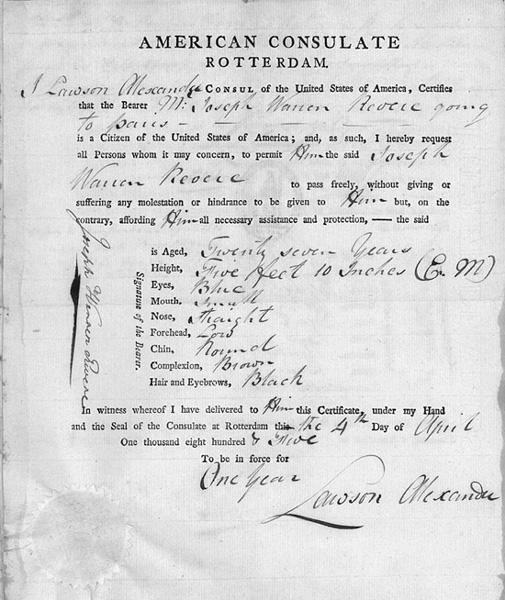 travelers. Carrying it around Russia, Isabel Hapgood, who would later compile and translate the
Service Book of the Holy Orthodox-Catholic (Greco-Russian) Church
, complained, that “no pocket of any sex would tolerate them,” leading her to suggest that a traveler could “wear them as breastplates (folded) or as garments (full-size).”
19
However, while the passport remained a large document, its appearance did change through the nineteenth century. There were regular changes to the two techniques used to establish that 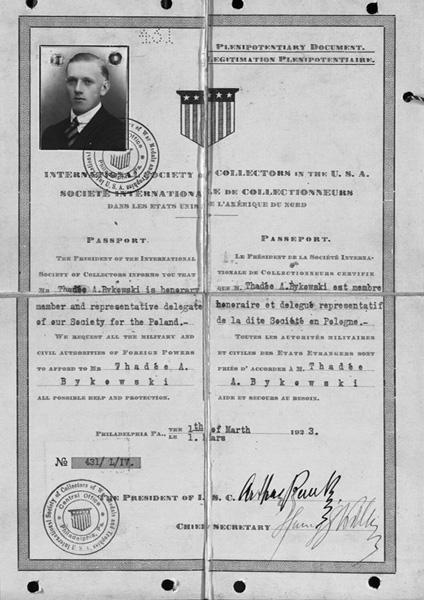 Figure 1.6. Membership card for the International Society of Collectors in the United States. Labeled a “passport,” it had been visaed by foreign officials during a member’s travels abroad in 1923 (National Archives, College Park, MD).

the document was issued by the government of the United States, the seal and ornamentation. Such changes were noted by some—and not always for the betterment of the legitimization of the passport’s claim to be an official document. “Vox Populi,” writing to the
New York Times
in 1874, complained that the recent change in format had produced a passport “issued in unsightly form on a simple half sheet, which is anything but respectable in appearance,” with the result that “the sacredness of the instrument is greatly impaired abroad from its miserable appearance.”
20
Less than a decade later an article in the same newspaper noted an improvement, although the writer quipped that the U.S. passport had “grown more imposing in the same ration that our influence abroad has waned.”
21

The ornamentation atop a U.S. passport usually took the form of an emblem representing an eagle. This ornamentation seemed to change depending on who engraved the copper plate from which the passports were printed. From 1820 to 1843 the passport actually included the engraver’s imprint, but the ornamentation also appeared to provide a space for the personal stamp of the engraver. Ornamentation first appeared on the passport in 1817 in the form of a small representation of the U.S. coat of arms (
figure 7.1
). In the middle decades of the nineteenth century it had become an eagle with a lyre upon its breast, with 13 stars of varying size forming the constellation Lyra around it. In the 1870s the eagle was removed (perhaps prompting Vox Populi to pick up his pen) before the Bureau of Engraving and Printing prepared its first passport for the U.S. government. The ornamentation on this passport featured a seated female holding a battle ax, an American shield, and an eagle behind the woman (
figure 1.7
). This changed again a decade later when the woman disappeared, allowing the eagle to once again spread its wings (
figure 1.8
).

Somewhat surprisingly, the seal used on U.S. passports also changed in appearance, although it was always meant to be the seal of the Department of State—at least according to the text of the passport. An act of Congress established the official seal in 1789 and entrusted its use to the State Department.
22
Early passports had the Department of State seal impressed from the die of 1790, with the legend “Secretary of State’s Office” in capital letters on the inside—it measured 1 7/6 inches in diameter. This resembled the design of the Great Seal of the United States, except that the eagle’s wingtips pointed downward instead of upward. By 1880 a new die was used that enlarged the seal to 2 5/16 inches. From 1911 the seal used on the passport became a reproduction of the Great Seal, with an encircling legend, “Department of State United States of America.” Soon after photographs were added at the end