Read The Passport in America: The History of a Document Online

The Passport in America: The History of a Document 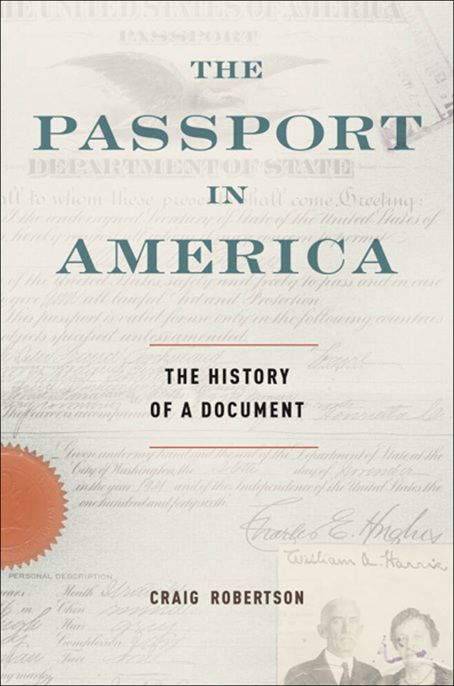 THE HISTORY OF A DOCUMENT

All rights reserved. No part of this publication may be reproduced,
stored in a retrieval system, or transmitted, in any form or by any means,
electronic, mechanical, photocopying, recording, or otherwise,
without the prior permission of Oxford University Press.

Some of the material within appeared previously in
Craig Robertson, “Four Documents, a Non-Citizen, and Diplomatic Controversy:
The Documentation of Identity in the Mid-Nineteenth Century.”
Journal of Historical Sociology
22 (2009): 476–496. Permission obtained.

Craig Robertson, “A Documentary Regime of Verification: The Emergence of the U.S.
Passport and the Archival Problematization of Identity.”
Cultural Studies
23 (2009): 329–354. Permission obtained. ISSN 0950-2386

Printed in the United States of America
on acid-free paper

Numerous people have helped me along the way with the thinking and writing that has become this book. Its early life took place at the University of Illinois, Urbana-Champaign. While I have little fondness for those towns I have a great deal of affection for the people I met when I lived there as a graduate student, many of whom continue to challenge me intellectually. I am privileged to be able to thank Cameron McCarthy, John Nerone, James Hay, Antoinette Burton, and Toby Miller for their enthusiasm for the project and for giving me the intellectual freedom to initially pursue it. The arguments and ideas in this book simply could not have come to exist without another group of five people—Ted Bailey, Jack Bratich, Mary Coffey, Sammi King, and Jeremy Packer—who while technically fellow graduate students also took on the role of teachers and mentors to me, especially when I returned to graduate school after a two-year break.

At different stages of the writing of what became this book some colleagues and friends provided particular assistance that I am very happy to acknowledge. At the very beginning Tony Ballantyne, Charis Thompson, and especially Lacey Torge helped me to figure out what history of the passport I wanted to write. Kelly Gates, Marie Leger, and Rob Sloane read the first hesitant attempts at putting thoughts on paper in that ugliest of genres, the draft dissertation chapter. Mark Andrejevic, Rachel Hall, Josh Lauer, and Chris Russill, through conversation and their own writings, sharpened my ideas as dissertation became book manuscript. I am grateful to Laura Frader
and Carla Kaplan for their insightful suggestions on how to translate my arguments into an effective book proposal.

Research assistance in the form of financial support came from the Institute of Communications Research and the Graduate College of the University of Illinois at Urbana-Champaign, the Babson College Board of Research, and the Office of the Provost, the College of Arts and Sciences, and the Department of Communication Studies at Northeastern University. I received fantastic support from the Interlibrary Loan departments at Babson College, Northeastern University, and especially the University of Illinois. Other critical research support came in the form of the generous hospitality of Rob and Robin Wilder, who let me stay for many months in their house while I researched at National Archives in Washington, D.C., and Maryland. Ben Scott and Jenny Wustenberg also provided hospitality and accommodation during a brief mopping up visit to National Archives. Elizabeth Pryor was generous enough to give me access to her dissertation. The friendly staff at Caffe Paradiso in Urbana, Victrola on Capitol Hill in Seattle, and especially 1369 Coffee House in Inman Square in Cambridge indirectly provided writing support by letting a non–coffee drinker sit and write for long hours—I should add I have cultivated a tea-drinking habit, and I like to think I tip well.

I am very grateful to Susan Ferber at Oxford University Press for initially seeing the value of an interdisciplinary history of the passport in the United States. Most importantly, I appreciate her understanding during a very difficult time in my life. Jessica Ryan and Ben Sadock ensured the manuscript made it through the production process in better shape than it went in. I am also grateful to Jane Caplan and Adam McKeown for their generous and insightful reviews (and for identifying themselves, in what I take to be the spirit of this project).

My thanks and gratitude also go to my friends far away in New Zealand who, while they have never read a word of this, have provided their support in numerous ways: Sally Aitken, Bridget Byers, Paula Cody, Donald Reid, and Judith Holloway. Also far away are my family, who have provided a constant source of generosity, love, and confidence: Yvonne, Lisa, and Campbell; Grant and Alf; Stephen, Delwyn, and Cleo. As I was revising this book my father, Doug, died unexpectedly. Like all my family he fully supported everything I did but it is fair to say that he definitely championed me in his own unique way. That he will never get to hold this book nor be around to see what my future holds is something I continue to struggle with.
During this difficult time, and more frequently in happier times, I have also been fortunate enough to have the support of another family, the Shackelfords: Sarah, Dwayne, Jack, Ryan, Rhiana, and especially Jim and Janet.

Two people deserve somewhat more detailed thanks. I cannot thank my brother, Stephen, enough. On a practical level his expertise as a twentieth century U.S. historian meant he always had a book or journal article to point me to when I had written myself into a corner, and he was a steady source of strategic advice on how to develop this project. But more importantly his support and enthusiasm for this book have known no limits. I simply can’t imagine how I would have completed this book without him.

Finally, but adhering to the conventions of academic acknowledgments by no means least, is Erin Shackelford. She is the person who shows me what matters in life, from her tireless efforts to help the underpaid and overworked get the respect their labor deserves to her unbelievable ability to know exactly what to say, or when to walk away, regardless of the situation. In terms of this project through conversation and probing questions she continually convinced me that a history of the passport could actually be interesting. More importantly Erin was there for the emotional roller coaster that was the backdrop as I completed this book. As well as experiencing the death of my father we have also experienced the joy of the birth of our daughter, Edie, and the wonderful first two years of her life. For all these things and more I thank you Erin, my best beloved and best friend.

Appendix:
I
MPORTANT
D
ATES IN THE
H
ISTORY OF THE
R
EGULAR
U
NITED
S
TATES
P
ASSPORT

The paradigmatic scene, perhaps of the modern era… is that of the immigration officer examining a passport. This is a scene which is both obvious and fathomless. Obvious is the enforced obligation of having an identity as this or that person; fathomless, and therefore insidious, is the method of proving, that—which?—identity.

—Dieter Hoffmann-Axthelm, “Identity and Reality:
The End of the Philosophical Immigration Officer”

In 1923 the
New York Times
published a brief Associated Press article about a Danish man who had recently visited Germany. He had arrived sporting a large up-turned moustache, which he soon shaved off upon discovering that “the Kaiser Wilhelm brand of upper lip decoration is not popular in the very modern commercial city of Hamburg.” However, the Dane encountered a problem when, at the completion of his visit, he attempted to leave Germany. According to the article, “The heavily mustached chap on his passport photograph did not in the least resemble the smooth-faced modern appearing Dane. Passport officials turned him back and detectives gave him the third degree. In his changed appearance they found resemblance to a famous international swindler.” Apparently “ashamed” of his failure to resemble himself, the unnamed Dane did not seek the assistance of Danish officials. Instead he chose to grow a new moustache, which the article confidently predicted “[would] enable him to measure up to his passport photograph.” This article, one of a handful from the period that recounts the problems shaving purportedly created for male passport bearers, reads today as somewhat bizarre, if not perhaps a little preposterous.
1
While it may indeed be out of step with our contemporary understanding of official identification practices, and even if the events did not occur exactly as reported, the article accurately captures some of the cultural and social tensions that existed around the documentation of individual identity in the early decades of the
twentieth century when travelers and immigrants first encountered universal demands for a passport. This book explores these tensions to offer a history of the emergence of the passport as an identification document in the United States. The informal introduction of official attempts to systematically use documents to verify identity pushes the beginnings of this history back to the mid-nineteenth century; the apparent general acceptance of the necessity and accuracy of the passport as an identification document a decade after the story of the clean-shaven Dane and his passport photograph brings this history to an end in the 1930s.