Read The Other Eight Online 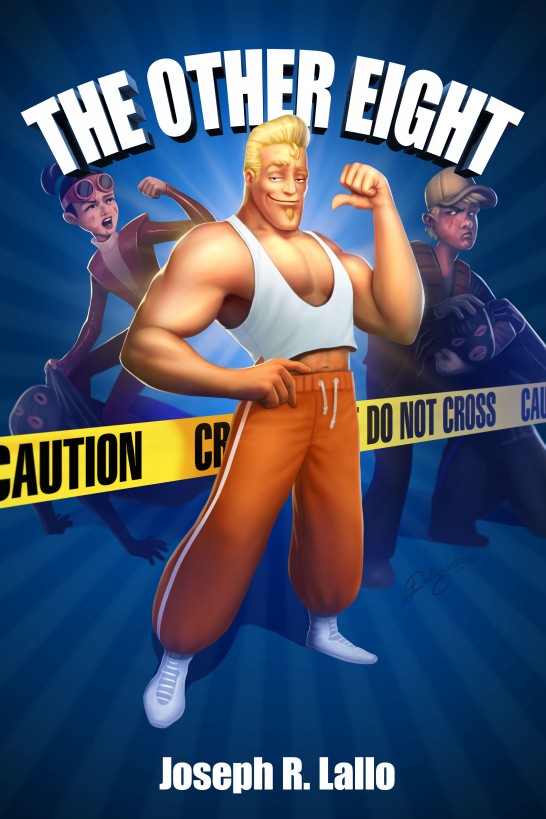 This ebook is licensed for your personal enjoyment
only. This ebook may not be re-sold or given away to other people.
If you would like to share this book with another person, please
purchase an additional copy for each person you share it with. If
you’re reading this book and did not purchase it, or it was not
purchased for your use only, then you should return to
Smashwords.com and purchase your own copy. Thank you for respecting
the hard work of this author.

The Defense
Advanced Research Projects Agency. DARPA. The headquarters was just
an unassuming little office building in Arlington, Virginia. It
honestly looked like it should be administrating health insurance
or something similarly innocuous. Those in the know, however, were
in general agreement that if something was going to end the human
race, it would either be defeated by or created by eggheads at
DARPA. They routinely recruited from the top research institutions
in the country. Their hefty Department of Defense payroll included
a legion of engineers, scientists, and contractors with the skills
to build anything you could imagine. An alphabet of BSs, MSs, PhDs,
CEs, EEs, and REs congregated under that roof, along with
practically any other combination of academic letters you could
think of. If it had to do with technology that could alter the
geopolitical landscape, it was envisioned, developed, financed, and
deployed from right here.

For a questionably stable scientific prodigy,
getting a phone call from DARPA was a dream come true. For a
psychologist like Adam Aiken, it was mostly just confusing.

Nonetheless, that’s precisely what had
happened. A crisp, businesslike voice had explained that the
government was seeking expertise in his precise area of
specialization, and there was a long-term consulting position open
if he would like to enter the interview process. This was still
more confusing because Adam had only just managed to secure his PhD
in psychology after four attempts. Unless the specialty they were
seeking was “defending an unpopular thesis” he wasn’t certain what
they hoped to learn from him. That said, he certainly wasn’t going
to turn down a government gig. One of the most useless members of
his graduating class had somehow bluffed his way into a government
grant and now spent most of the time since cashing checks and
conducting blind studies. Adam wouldn’t mind standing around with a
clipboard and a bottle of placebos if it would keep the student
loan bills under control.

Now he sat on a chair with a cushion that had
been crushed beyond usefulness at some point during the Reagan
administration, watching a fluorescent light flicker and wondering
if the mustard stain on the cuff of his one and only suit was
noticeable. Adam had been, until a few months ago, a career
student. His undergrad and post-graduate work started fairly well,
but he fell victim to an acute fascination with a certain
psychological phenomenon that was poorly viewed among his peers.
This was mostly due to the fact that his peers were in
near-universal agreement that the part he was most interested in
wasn’t even a psychological phenomenon. Hence the repeated attempts
to finalize his PhD. Through sheer stubbornness he’d been able to
get some of his early findings published in an Argentinian medical
journal, and he’d finally worn down the doctoral committee so that
he could enter the impenetrable job market at last.

The
tak
-
tak
-
tak
of an
obnoxiously loud keyboard filled the air as a military clerk with a
rigid posture and a precision crew cut did whatever it was that
military clerks did all day. He sat behind a waist-height wall made
of old-fashioned stained wood. A black and brass nameplate labeled
him Sergeant Roberts. Behind the starched, creased young man was a
frosted-glass door with the name General Siegel painted on it,
which hung nearly open. Inside the office beyond sat a gray-haired
soldier in a fairly impressive uniform. With nothing else to do,
Adam stared at the clerk as he typed with a mechanically steady
tempo without pausing or slowing. It was utterly hypnotic, and
though he couldn’t be sure, Adam was fairly certain Roberts hadn’t
blinked once.

“That is correct, sir. Fourteen hundred,” the
clerk said with regimented politeness.

“No, sir. The time is 1358.” He reached
forward and tapped a digital clock, black digits confirming his
statement. The fact that he knew the precise time while the clock
was facing
away
from him prompted Adam to add this to a
mental “this guy is a robot” tally.

“Your watch is incorrect, sir.”

“Are you sure? I set this on the cable box in
my hotel room this morning.”

“DARPA’s clocks are synchronized
cooperatively with the atomic clocks of the National Institute of
Standards and Technology and the US Naval Observatory. Our clocks
differ from Coordinated Universal Time by less than zero point
zero, zero, zero, zero, zero, one seconds.”

“I heard somewhere that the cable company has
to keep accurate time, by law. Are you suggesting they don’t know
what time it is?”

Adam glanced up at the general, who did not
seem to be terribly busy. He sat in his office, alone, tapping the
eraser end of a pencil against his desk absentmindedly.

At the exact instant the digits of the LCD
clock blinked over to 1400, the general leaned forward and tapped a
button on his phone. There was a tone, and a sharp voice broadcast
through a box on the clerk’s desk. “Has Dr. Aiken arrived?”

“Yes, sir.” The clerk addressed Adam: “The
general will see you now.”

The clerk depressed a buzzer on the desk, and
the gate in the low wall rattled and swung free. Adam pushed his
way through the half door, taking a quick glimpse aside to see if
the clerk’s chair had an extension cord, before passing through the
general’s door.

It was a small office, little more than a
desk with a scattering of yellow legal pads, a few
expensive-looking ballpoint pens and cheap-looking wooden pencils,
a complicated office phone, and a blotter. On the desk sat posed
pictures of a savagely traditional couple, the general and a
white-haired woman, who was presumably his wife. Scattered sparsely
across the walls were coldly worded commendations, awards, official
portraits, and press pictures of the general’s various career
highlights.

“Dr. Aiken,” he said, standing and offering a
bone-crushing handshake, “thank you for coming in on such short
notice.”

“Oh, uh, no problem. Anything to help out
good ol’ Uncle Sam, right?”

“Yes. If there’s one thing you college types
leap at, it’s a chance to suckle at the taxpayer’s teat,” the
general remarked.

Adam released a nervous laugh at what was
either a staggeringly blunt indictment of academia or an expertly
delivered bit of dry humor. The general’s expression did little to
clear things up, remaining flat and stern. Siegel had a straight
and carefully trimmed mustache and the sort of hard jaw and
down-turned mouth that didn’t seem quite complete without a cigar
chomped between yellowed teeth. His uniform was flawless and worn
in full, right down to the multicolor pins on the jacket.

“Close the door and take a seat,” the general
said. As Adam did as he was told, Siegel sat behind his desk and
swept away all but one pen and pad. “You’re probably wondering why
we asked you to fly all the way out here.”

“It did strike me as a little, uh,
unexpected.”

“It wasn’t my idea, I’ll tell you that. The
truth is, we have a project that needs some screening and
assessment. There are only three individuals in the nation with any
published papers on the topic. You’re number three, in case you
were wondering.”

“See, that’s why it was unexpected to me. The
only thing I’ve published is the first version of my meta-human
thesis.”

In lieu of a reply, Siegel opened a drawer
and removed the inevitable cigar from inside. He clamped it in his
teeth but neglected to light it.

“You’re going to screen and assess a group of
superheroes?” Aiken asked.

General Siegel cleared his throat loudly,
then leaned forward and pressed the intercom button on his phone.
“Has Dr. Aiken signed all of the proper paperwork?”

“Yes, Dr. Aiken, we are planning to screen
and assess a group of superheroes. Or rather”—he cleared his throat
again—“another one. And we are planning on having you do it. Until
Thursday, I was under the expectation I’d be working with Dr.
Richard Liefeld. Then three days ago we found out the marine brass
extended the exclusivity clause of his contract. Who would have
figured the jarheads would have the best bureaucrats? We have
deadlines to meet, though, so instead of Liefeld, we get you.”

Adam shuddered. Dr. Liefeld was the foremost
expert in the so-called meta-human condition. “Meta-human” was the
term scientists tended to use in situations where the general
public would use “superhero” or “super villain.” Dr. Liefeld had
been doing extensive physiological and psychological testing in the
area almost since the phenomenon was first discovered back in the
early 1960s, and his name became the byword for superhero science.
He was also part of the committee that had rejected Adam’s doctoral
thesis the first three times. Liefeld had been “unavoidably
detained” during the last thesis defense and could not attend,
which was almost certainly the only reason Aiken was able to squeak
through.

Siegel cleared his throat yet again, causing
Aiken’s mind to flash back to the term paper he’d written on
complex motor tics. The general pulled open a drawer and retrieved
a thick file folder and slapped it on the desk, flipping it open.
With another grinding throat evacuation, he began to dictate the
contents of the fact sheet within the file.

“Web browsing? How do you know what websites
I’ve been visiting? And how exactly is that relevant?”

“You are interviewing for a position at the
DoD. That should answer both questions.” He flipped through a few
more pages. “Well, Dr. Aiken. Your personal history has been
thoroughly vetted, and at the very least you aren’t a threat to
national security. How much of an asset you’ll be remains to be
seen. It says here that you’ve done significant research on the
subject of the meta-human condition. I’ve dealt with enough of you
college boys to know that you write reports by the pound, so
frankly I haven’t got the time to listen to you summarize your
findings. Here’s the short version. As you know, a few decades ago
people started to show up with ‘special’ abilities. Most of those
abilities… hell,
all
of them, have been damn near useless so
far.”