The Office Summer Picnic (Force Me) 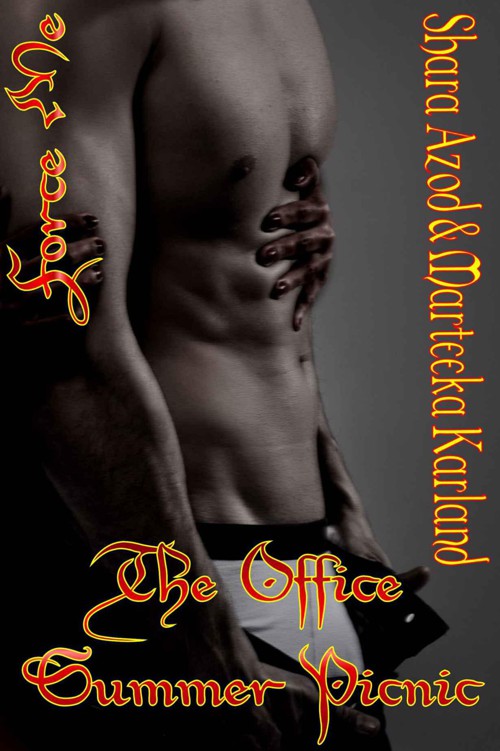 Books are NOT transferable. Re-selling, sharing or giving eBooks is a copyright infringement.

This story dedicated to those who dare.

Office parties were generally a breeding ground for drunken escapades and fumbling hook ups but there was nothing like a company picnic. Or so Shenice Robins comes to find out while once again caught in the snare of her lover Alistair Parsons. The only man whose authority she had NO issue obeying. Even wagging tongues around the office can't stop the two from delighting in each other. Why should one small outdoor activity do so?

“Of course Shenice got the promotion. She’s sleeping with the big boss.”

Although Shenice couldn’t quite place the sneering voice, she knew whoever the speaker was; he wasn’t alone in his assessment. The snickers that followed his words proved it.

“You’re just jealous,” one brave person spoke out in her behalf. Surprisingly, it was one of the administrative assistants Shenice often casually dismissed as a group of hussies. Ironic that one would speak up for her now. “Shenice Robins is the best sales execs in this place. You wish you could pull in her numbers. She deserved that raise, and what she does on her time off is none of your business. She single-handedly pulled up the numbers in over three dozen markets when no one is listening to the radio anymore.”

You’re damn right I did.
Shenice nodded silently from her hiding place. That crap wasn’t easy either. Cars came equipped with MP3 plug-ins and satellite radio these days. Shenice prided herself on knowing what people wanted to hear in the various regions all across the country. She’d brought up listenership in the key demo group, and as a result, she sold advertising like crazy. Local, national--didn’t matter--she brought in the big numbers. And she did deserve her promotion. She only wished she could be as sure as the admin who had defended her that the promotion was because she was a damn great sales exec and not some kind of “money on the dresser” thank you from Alistair.

“Yeah, like all those meetings she has with Parsons are about sales,” the other asshole shot back.

“Sounds to me like you want him,” yet another young admin said, giggling, followed by a chorus of female giggles. The admins always stuck together like that. This was one instance Shenice was damned grateful they did. “So yeah, I would say jealous.”

Sounds of people shuffling out of the break room alerted Shenice it would soon be safe to come out from the little alcove. Not before she heard the original voice mutter, “Stupid cunt,” not quite under his breath, but not nearly loud enough to get him into trouble.

Shenice really hated it when people assumed she wasn’t good at her job just because she was having an affair with her boss. She supposed she couldn’t really blame them, but it still irked her. She was damned good at her job. The only reason she slept with Alistair Parsons was because she simply could not resist him. The man was seriously fine. Like,
Lord have mercy
, fine. Just thinking about him had the ability to make her wet and wanting. Since that very first time at the office Christmas party, the sex just got hotter and hotter. Hell, they had gone at it like bunny rabbits on the entire ride from LA to London. She could barely walk when they’d gotten off the company jet.

The Christmas vacation had been like a fairy tale complete with a prince of her very own. Even though it seemed as if they were always going at it, Alistair had taken her all over the place, showing her not only the tourist parts of London, but the side generally only locals got to experience. It had been a whirlwind of a vacation, and it hadn’t ended when they returned to LA.

Since they had been back, Shenice spent very few nights alone. Alistair was fast becoming an addiction, and Shenice was very much afraid there was no rehab for this. Her knees got weak when he walked into the room. No way blue eyes with a grayish tint should look so hot; silvery eyes were supposed to be cold, distant even. Yet when Alistair looked at her, her panties got wet instantly...when she wore them. Those looks burned her alive, making her feel like she was the most beautiful woman in the world. Alistair often liked to call her into his office on some pretense or another only to strip off whatever lace confection she chose to wear underneath her clothes that day. And yeah, there were days she wore skimpy little panties just to get him going. Seeing him want her was a turn-on in itself.

Careful not to be too carefree with their affections at work, there was rarely any serious hanky panky going on during office hours. There was just too much at stake on her end. No way she was going to have all she had worked hard for blown away in a scandal. But seriously, when those thick fingers of his trailed the seam of her labia, how could she possibly
not
open her legs for his exploration? A little nip was what Alistair called it. And never once did he ask for or even want reciprocation during working hours. He really did just enjoy seeing her fall apart for him. That alone was enough to send her over the edge, biting her lip in a desperate attempt to keep quiet.

And the things he did to her outside the office! Yeah, the first time was hot as hell. The way Alistair took complete control of her right over his desk had been the stuff fantasies were made of. However, he had proven over and over again he was no one-trick pony. He’d once made her come at a crowded company party to woo investors; she’d had to bite her lip so she wouldn’t cry out. He’d just slid his hand up her dress, manipulating her until she damn near collapsed while partially hidden in a small alcove, whispering in that sinful voice of his that she should be very quiet lest anyone hear what they were doing. It had been dangerous, scandalous, and oh, so very good!

The only problem she had was he didn’t seem to want to commit to her. At least, they never discussed commitment. The sex was hot, and the company was great. But there was never anything more mentioned. She had thought that the trip to London would be the beginning of something special. And the holiday had been one of the best of her lifetime. As always, he proudly declared she belonged to him. He made her say it often. But what the hell did that mean? She belonged to him in bed? She belonged to him as a booty call? Or was it something deeper?

One thing was for sure; she couldn’t keep going on like this. There came a time in every woman’s life when she needed a hell of a lot more than great sex to keep her warm at night. Wait, maybe not. How many friends did she have who complained constantly sex had definitely cooled once their relationships became solidified? Too many. Maybe she shouldn’t say anything. Maybe if she gave Alistair a little bit more time he would...

Man up, Shenice!
She deserved to know what this was, and she had no reason not to ask. The worst thing that could happen was she would lose a good lover. The best lover she’d ever had, really. But she had to do it. The man had way too much hold over her. There was no way she could keep this up. Already emotionally attached, she was so very afraid of falling in love only to be hurt. And the situation here at work had gotten ridiculous. This was hardly the first time she’d heard whispers about her and the big boss. Which was why she had begun shopping for a new job about a month ago. So far she had three solid offers.

Biting her lip she slipped from her hiding spot in the alcove to sit at one of the vacated chairs in the break room, unwilling to face the crowd just yet. Even if Alistair wanted a real relationship, there was no way she could stay here. She was going to have to quit and move on. A clean break was the only way. That way, she could possibly work through her Alistair addiction without having to see him every day.

Yes, this was the only way. If he really wanted her, he would come after her. If not, well, it just wasn’t meant to be, was it?

Waiting until the crowd had dispersed, Shenice went back to her office. Today would be the day she turned in her notice. Alistair was away on a business trip. She’d have the week to prepare herself to face him and less time to dread the separation should he turn out not to care.

Opening the top drawer of her desk, she took out the neatly typed resignation. Just looking at it made her chest ache. This was it. All or nothing. Her fingers trembled, and the urge to let tears fall at the loss ached inside her. Hell, she hadn’t lost him yet, and she was already grieving. She totally had it bad. It might be too late to salvage her heart after all.

The Annihilation of Foreverland by Bertauski, Tony
Addictive Gloamshade by Poppet
The House on Flamingo Cay by Anne Weale
The Night Hunter by Caro Ramsay
The Girl on the Fridge: Stories by Etgar Keret
A New World [7] Takedown by John O'Brien
Mothers and Other Liars by Amy Bourret
Lyndley by Renee, K.
The Very Last Days of Mr Grey by Jack Worr
The Darkest Embrace by Hart, Megan