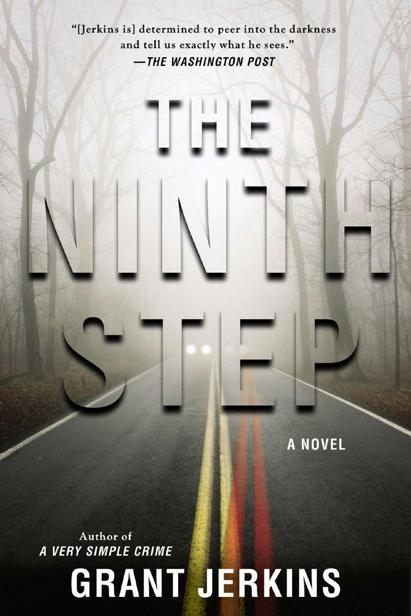 Praise for
At the End of the Road

“Unsettling suspense and chilling tone… A disturbing (in a good way) coming-of-age story with one of the creepiest characters to inhabit my imagination in a while—a paralyzed man with ‘a distinctively reptilian appearance’ who might be the devil on Eden Road.”

“Irresistibly creepy… Reminiscent of classic thrillers… from
Psycho
to
Deliverance
,
Whatever Happened to Baby Jane
to
Nightmare on Elm Street,
and not since
Lord of the Flies
have we seen children at the mercy of such meanness from their own kind.”

“Absolutely pitch-perfect… Deserving of a place on shelves alongside the all-time classic coming-of-age stories ever written.”

Praise for
A Very Simple Crime

“
A Very Simple Crime
is the product of A Very Talented Writer. Grant Jerkins’s stylish prose and rich characters set him apart. As a reader, you will enjoy every page. It’s impossible this is a first novel. Don’t miss it.”

“The degree of wickedness in [Jerkins’s] stylish legal thriller still delivers a chill… There’s not a soul you can trust in the story… [A] well-fashioned but extremely nasty study in abnormal psychology, which dares us to solve a mystery in which none of the normal character cues can be taken at face value.”

“A masterfully Hitchcockian story… Every time you think you know where things are headed and what a character is about, Jerkins throws in another twist that leaves you shaking your head at its diabolical cleverness. This is not, however, a book for the faint of heart… Jerkins’s writing is both brilliant and brutal… Endlessly fascinating.
A Very Simple Crime
is a very impressive debut. Grant Jerkins has serious skills, and you’ll be kicking yourself if you don’t jump on board his bandwagon and get a comfy seat
now
because [it’s] going to be standing room only soon.”

“So stylishly twisted that I read it in one sitting.”

“No one in this novel is as they appear to be, and the twists and turns never let up until the very last page. This dark, chilling debut… is a real page-turner and should especially appeal to legal thriller fans.”

“You have to admire the purity of Jerkins’s writing: He’s determined to peer into the darkness and tell us exactly what he sees.”

—Nicholas Kazan, playwright and Oscar-nominated
screenwriter of
Reversal of Fortune

“Jerkins juggles his plot twists like a top circus acrobat in this nasty legal noir.”

AT THE END OF THE ROAD

PRINTED IN THE UNITED STATES OF AMERICA

For William Irish and John O’Brien

I would like to thank Robert Guinsler of Sterling Lord Literistic and Natalee Rosenstein of Berkley Prime Crime. Also at Berkley, my thanks to Robin Barletta, Megan Gerrity, Andromeda Macri, Kayleigh Clark, and Amy J. Schneider.

I’m grateful to Tricia Parks and Gary Mullet for checking my math. Any errors in that regard are mine alone.

Chronic remorse, as all the moralists are agreed, is a most undesirable sentiment. If you have behaved badly, repent, make what amends you can and address yourself to the task of behaving better next time. On no account brood over your wrong-doing. Rolling in the muck is not the best way of getting clean.

8. Karma and its Chameleon-Like Qualities

9. He Hoped the Threat of it would be Enough

11. The Monotonous Electronic Hum of a Flatline

13. The Sweet Odor of the Conducting Gel

14. Covering up her Crime

17. An Accumulation of Radioactive Isotopes

23. These People were Insane

26. You’re Only as Sick as your Secrets

27. The Dirty Little Things We Do to One Another

31. You have Three Seconds to Vacate

34. Probably Drunk When She Did It

37. He Could Quite Possibly Hit Her

39. If you Knew What you were Looking for

40. Gold Teeth and Platinum Grills Glinting in the Sun

44. What It Would Be Like Having your Baby Born in Jail

48. It Was Only For a Millisecond that He Paused

49. This Crime Has Transformed Him

54. He Leveled the Gun at Cornell’s Head

61. A Fate that Looked Dark Indeed

At two thirty in the afternoon, while teaching his last class of the day, ninth-grade geometry teacher Edgar Woolrich was thinking about the online auction that ended that night. The listing was for a vintage Japanese puzzle box—of which he, admittedly, already had many. But this particular box was special. It had five hidden compartments. Quite rare. The final price could easily climb into the thousands. Or, the obverse, a true bargain could be had.

Timing his bid would be critical. It was Friday night, so one could extrapolate that many potential bidders would be out at social functions. There were time zones to consider. Potential bidders on the West Coast could still be stuck in late-day commutes, while Edgar would be snug at home, his mouse pointer
poised over the “confirm bid” button. Of course, ubiquitous handheld devices lessened that edge considerably. And the auction already had eighteen people watching it. Plus you had to factor in folks like Edgar himself who never clicked the “watch this item” button—lest they tip their hand in some unforeseen way.

No, the factoring that came into play while bidding on an online auction was like plotting irrational numbers on an infinite grid.

The lines of intersection were beyond reckoning, the variables endless.

“The triangle,” Edgar said, “is God’s own perfection.”

Nobody heard him. While he had been daydreaming about the puzzle box, his class had taken advantage of his inattentiveness.

Edgar picked up the music triangle that he had borrowed from Mrs. Frazer, the band teacher, and struck it repeatedly with the metal wand. All of the students looked to the front, and the classroom grew quiet. Edgar wrapped his fingers over the vibrating metal instrument to stop the lingering note.