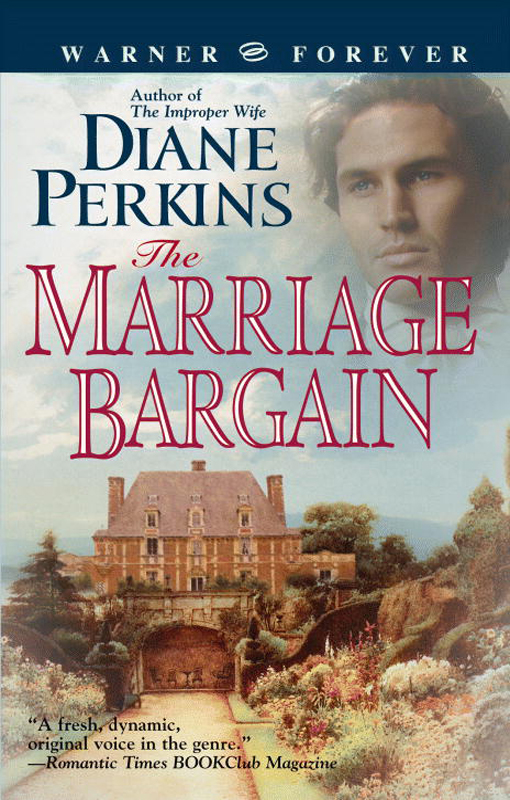 If you purchase this book without a cover you should be aware that this book may have been stolen property and reported as “unsold and destroyed” to the publisher. In such case neither the author nor the publisher has received any payment for this “stripped book.”

All rights reserved. No part of this book may be reproduced in

any form or by any electronic or mechanical means, including

information storage and retrieval systems, without permission in writing from the publisher, except by a reviewer who may quote brief passages in a review.

Warner Forever is a registered trademark of Warner Books.

The “Warner Books” name and logo are trademarks of Hachette Book Group, Inc.

Raves for
THE IMPROPER WIFE

“Four Stars and a K.I.S.S.! . . . This book heralds the entry of an original voice in the genre. Be sure to add this one to your must-read list!”

“This book was so engrossing, I read it through in one sitting, and plan to re-read it as well. The detail is lush . . . the dialogue is realistic . . . and I was swept away by the romance.”

“Five Roses! . . . A very satisfying romance . . . Diane Perkins is an author with an amazing storytelling talent.”

“A four-rose read! . . .
The Improper Wife
is sure to become a favorite for lovers of Regency romance. It’s a very impressive debut, indeed.”

“Perkins makes everything so believable and interesting: the villain is the worst, the lead character is so appealing . . . the children are wonderful and the side stories only make this tale richer . . . I adored this story.”

“A grand historical romance written with deep emotion, authenticity, and originality. One for the keeper shelf.”

“Diane Perkins is an author to watch . . . We can hope readers won’t have to wait too long for her next book.”

“Engaging and refreshing . . . There are plenty of well-drawn secondary characters that add to this already fascinating tale. Diane Perkins is an author to look out for, and I can’t wait to read whatever she has next.”

“A beautiful story . . . Mary Balogh and Carla Kelly, make room: There is a new kid on the Regency block.”

“One of the most interesting marriage-of-convenience stories I have ever read . . . I couldn’t put this book down.”

“A magnificent tale of secrets, lies, and love that will keep you totally engrossed from cover to cover . . . Ms. Perkins has written a truly unforgettable story.”

“I’ll be looking for more books from Diane Perkins.”

“Four Hearts! . . . Highly recommended!
The Improper Wife
is an absorbing, well-written historical novel, rich in detail and characterization . . . Diane Perkins is a writer to keep an eye on!”

To my daughter, Meagan, and my son, Dan.

You’ve filled my life with joy.

T
his book would not have been possible without the help and encouragement of my writing friends. Thank you, Karen Anders, Lisa Dyson, Darlene Gardner, Julie Halperson, Helen Hester-Ossa, Virginia Vitucci, Mary Blayney, Lavinia Klein, and my Aussie “twin,” Marg Riseley. Thanks, too, to Nancy Mayer, Victoria Hinshaw, and Emily Hendrickson from The Beau Monde, who came to the rescue when I had pesky research questions Google and all my shelves of research books couldn’t answer. Special thanks to another Aussie pal, Melissa James, whose last-minute feedback made
The Marriage Bargain
a better book.

On another note altogether, thank you, Kathryn Caskie, for sharing your knowledge of promotion to a clueless person like me.

I’m waving, too, to the Wet Noodle Posse (wetnoodleposse.com), my fellow 2003 Golden Heart finalists, a bunch of talented writers who stayed together to lavish support and laughter on each other. Ladies, soon you’ll all be writing a page like this!

And last, a heartfelt thank-you to my editor, Melanie Murray, who is always there when I need her, and to the whole Warner Forever team, who make working with them a delight.

M
ist still clung to the grass in a field on the outskirts of London near the Uxbridge Road. Only the barest peek of dawn glimmered on the horizon. Spencer Keenan paced the length of the field and back, mist swirling around his feet like smoke above a cauldron.

“This is utter nonsense.” His friend Blake’s voice sounded crisp and clear in the damp air. It was also filled with exasperation.

Spence turned to him. “Nonsense it may be, sir, but the idiot accused me of cheating. What else was I to do but call him out?” He gave a wry grin. “You are my second. You were supposed to prevent settling the matter on the field of honor.”

Blake shook his head. “Damnedest thing, Spence. There was no reasoning with these fellows.”

As the heavy dew stained his boots, Spence crossed over to where Blake waited. Their other friend, Wolfe, paced nearby. Who else but these two men would have stood by him through this foolishness? At this ungodly hour as well.

Spence glanced at them, Blake rocking on his heels, hands in his coat pockets, Wolfe prowling back and forth at the edge of the road, checking every two seconds to see if a coach was coming. Spence saw not the tall, imposing ex-soldiers they were, but the young, skinny lads he’d befriended at Eton. He grinned again, this time at the memory of standing shoulder-to-shoulder with these two against larger, older bullies. And of sitting in the dark, risking more brutality from the upperclassmen for not being abed, naming themselves
The Ternion,
one plus one plus one, stronger together than apart. Even Napoleon, the biggest bully of them all, had been unable to vanquish them.

Wolfe, still searching the fog-filled road, walked over to where Spence and Blake stood. Spence glanced from one to the other. Theobold Blakewell, Viscount Blakewell, with his impeccable breeding and good looks that never failed to make the ladies swoon. Gideon Wolfe, as dark as Blake was fair, the son of an East India Company nabob and a half-Indian mother, always ready to fight anyone who dared take issue with that fact. And finally Spence himself, Earl of Kellworth, resisting the use and confines of his title ever since the reckless accident that caused his brother’s death eight years before.

Spence laughed out loud. The Ternion stood shoulder-to-shoulder this day because of one foolish young cub who dared accuse Spence of cheating at cards. That night, the whole of White’s game room had pleaded with young Lord Esmund to render an apology to Spence. Blake and Wolfe had demanded it. But Esmund, looking as frightened as a cornered fox, with hair every bit as red, had shaken his head like a willful child, refusing to retract his ill-conceived words. And Spence, feeling a leaden dismay, had been left with no other choice but to call Esmund out to this duel at dawn.

Wolfe turned to Spence with a furrowed brow. “The stripling cannot have any skill with the pistol.”

Spence, on the other hand, had accrued almost a decade of war in which to hone his skill, but that need not be said.

“As we all well know,” agreed Spence.

Blake slapped Spence on the shoulder. “You might actually hit the fellow and kill him, you know. Then what? We all dash off to the Continent before you are hanged for murder?” Blake gave him a teasing expression. “I have had my fill of France, Spence, old fellow. I pray you will make a dumb shot.”

“Shoot into the air?” Spence pretended to bristle. “I cannot so dishonor myself.”

For all his levity, Spence’s gut twisted painfully at the unlikely prospect he might draw the blood of that foolish pup. Spence had spilled the life-blood of many an enemy, but this mere boy was not his foe, and Spence had no desire to end one more young life merely to preserve his good name.

Besides, he no more relished fleeing to the Continent than Blake did. Why, the Ternion had just begun to sample London’s delights. There was sport, gaming, and drink aplenty still to enjoy.

Spence set his chin in resolve. He would simply use his skill to make it appear as if he aimed directly at Esmund’s vitals. With any luck, the pistol ball would not go wayward and accidentally kill the fellow.

“You
could
kill him, Spence.” Wolfe’s voice was as serious as Blake’s had been jesting.

“I shall try my best to miss him.” Spence patted his friend’s arm.

Spence paced again. He hated being backed into a corner like this. He detested confinement of any kind, such as a flight to the Continent would impose. Not now when they were free to go and do as they pleased. The Ternion were still young and unfettered. At least Blake and Wolfe were unfettered, and Spence had arranged his responsibilities in a way that very nearly demanded no attention at all.

In time the Ternion must change. Eventually Blake and Wolfe would want to settle themselves, and their adventuring would come to an end.

The familiar restlessness pounded at Spence’s chest. How long before Blake and Wolfe desired to marry and set up their nurseries? Not long, he suspected.

“I have examined the pistols.” Blake’s voice cut through Spence’s thoughts like his boots had split the mist. “An extremely fine set. Made by Manton.”

Blake, as any good second ought, had negotiated all aspects of the duel, especially the pistols. He lifted a finger and shook it at Spence. “What foxes me is where a nodcock like Esmund would acquire such a pair.”

Spence good-naturedly pushed Blake’s arm aside. “Devil if I know.”

“I insisted upon firing them both,” Blake went on. Blake had been meticulous about the duel, as meticulous as he was about the tailoring of his coat or the cleanliness of his linen. He tugged at the snow white cuffs of his shirt. “Seems to me both pistols pulled to the left.”

Perhaps Blake was succumbing to a fit of nerves, Spence thought, because this must have been the fifth time he’d mentioned the pistols pulling to the left. Spence bit down the impulse to tease his friend about turning soft after only a month of civilian life.

As in all else, the Ternion had together sold their commissions, all agreeing they’d had enough of war after Waterloo, when their regiment, the 28
th
Regiment of Foot, bore the onslaught of wave after wave of French cavalry.

Wolfe gazed toward the road for the hundredth time. “Where do you suppose Esmund found a surgeon willing to risk attendance at a duel?”

Blake shrugged. “His brother located the man.” He gave a soft laugh. “Can you imagine what sort of surgeon would take the risk? I pray he is not needed.”

So did Spence, who wheeled around and trod into the field again, busying himself in judging distances, searching for a tree branch or rooftop or something in the distance that would make a good place to aim.

The mist thinned as the sky grew lighter, but the morning’s unseasonable chill gave Spence a shiver. The plain brown coat Blake and Wolfe insisted he wear had no buttons. “Nothing to give Esmund a place to aim,” Blake had told him. “Stand sideways,” he’d also instructed. “But turn your head toward him.” Spence had listened, nodding agreeably, going along with the instructions as if he did not already know this trick of making himself as small a target as possible.